Welcome to the Hive Engagement League!

The support that the post received last week helps with this weeks prizes, thank you @ocdb and everyone for this.

If you wish to be added or removed from my master list, please let me know. This league is not based around financial rewards and relates to engagement.

Everyone currently on my master list has a chance here, including those powering down or dealing in delegations over the past couple of weeks. Only the top 100 scores are shown.

The score is made up from a simple formula which uses the following types of engagement:

Note: Copy/Paste comments will be excluded!

Second week in a row, and the top 2 remain unchanged!

The Curation League - Rewards based

NOTE: If you have started a power-down or have been involved in HP delegations in/out of your account, you will not appear on this list for 15 days following the activities above. Thanks!

A share of 50 HP for the top 10 in the Engagement League and those not far behind and without a self-vote goes to: 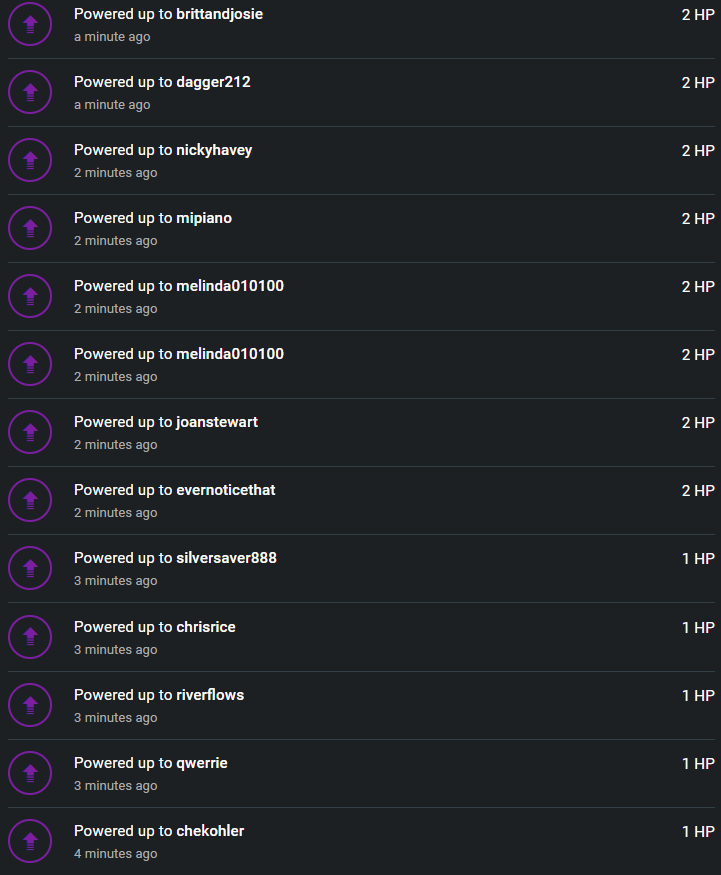 The list is ordered by the date that sponsor first offered a prize for their lucky number.

Thank you to everyone sponsoring a number in the Engagement League, very kind of you all!

If you wish to sponsor a lucky number (with a prize of your choice) let me know.

Thanks to @good-karma & @ecency, Ecency Points will be given out by @melinda01010 to a selection of accounts that reached the top 100 in the Engagement League. Find out more here.

Hahaha I hope a lady was the reason 😉

Ok next time do both 😉

It's been a long day, most of which I have been sleeping :D

Much thanks for your support! Was just about to head out and get a bite before settling in for the Duke and Duchess interview and saw this. Been commenting throughout the day, so hopefully we'll improve on last week's total, while having fun engaging with others. Thanks!

I miss those times where weekend day sleeping was possible.

Terrible sleep last night though, my clock is a touch out of sync now.

One day you'll get that afternoon siesta :)

Thank you kindly, your gift is much appreciated! Have been finding lonely posts to comment on and stumbled onto this one. Thanks again! :)

Plenty of lonely posts out there :)

Thank you for sponsoring the EL :)

Congratulations to the top 10!

Lol, bed time it is! You have done amazingly. Great work! 🍀

I was only planning to maintain that 2nd place but I guess I came in close on 1st. More than half of my comments were probably on LeoFinance though.

Good job and congratulations to everyone else who got a reward.

The nice thing about this table is that the numbers don't mind which app you are using to engage. Well done on another top 3 :)

Thanks Asher ,
It’s way past my bedtime see ya folks

Thank you @brittandjosie and congratulations to you too 🤗

Appreciate the congrats! All's well that ends well, sleep tight and have a great night!

Just made it before midnight :)

Thank you for sponsoring the EL!

Hey tio! We made it to the top 10 - well done! I think our conversations had an impact haha!

Nicky man, yeah, we should talk even more hahah, so we can make better achievement, right? 🎵😁

So, what do you think about my piano cover of... 🤣

Haha I'm all up for that! I just checked your piano cover out - you're very talented!!

I'm glad you enjoyed the drum & bass too 😃

Saw it, replied to it :D

Do my eyes deceive me, or is Mr Part-Timer @nickyhavey in the top 10 this week? 😂

Have a great week, everybody!

Thanks Traci
Hugs to you

Thanks a lot mate! Would love to see more from the music community creep up the charts on this league too!

Haha, if I was full time, the EL would not be the same again 😜

Thank you for sponsoring the EL, and for my Tip! :)

Congrats to @amr008 @jfang003 and @bozz for a podium finish this week! Congrats to everyone who is in the top 100!

I get to send a lucky number prize to my friend @bashadow this week! ♥️

And I'm sending out 300 POINTS prizes each form @Ecency to:

Hope it was a fab party, Asher!

Thanks a lot, dear, that's so generous of you...

All credit goes to #Ecency!

Thank you I appreciate it. Two weeks til we have been here on Hive for one whole year, my how the time has flown.

It has gone by quickly! Probably because we have been so busy keeping up with all the changes.

Awesome. Tanks so much!

Thank you for sponsoring the EL Melinda! Yes, a good party :) :)

well isn't this special yes it is and lot of user in it. tho tell you the truth is something I need to do to be there ? if possible. just wondering

Congrats to all the winners! I wasn't active for few months. Am I still on the master list?

Yes, I don't remove anyone unless they ask me to. Welcome back :)

Congratulations to those at the top, you make a great effort to strengthen HIVE.

Cheers irvinc, and thank you for the re-blog :)

@JoanStewart! You are the lucky #9 this week! A prize should be in your wallet. Power up, Baby!

Off to work! Bye!

I hope you made it on time!

Thank you as always for sponsoring the EL Denise :)

A pretty good week for people voting, I do like seeing that number increase, it means that even though a fewer top level post, more votes still went out, that is always good. I actually bucked the posting trend and managed 3 this week, lately that does not happen often. Just think two weeks, and Hive is one year old. Congratulations for all of those that have stuck the almost year out.

3 posts, steady on there!

This first year has gone really fast I think, it's been (mostly) fun :)

It has been mostly fun. I think the current developer team is doing pretty good at solidifying the foundation layer, and in doing building up a trustable site.

Oh wow that’s awesome to wake up to, thank you for the lovely gift

You are welcome brother.

Thank you for sponsoring the EL!

Thanks @dswigle for lucky number 9 who would have guessed.

Happy New Week to everyone!

Thanks so much! :)) Glad you landed there!

Yes it was a late on yesterday, hopefully back to usual time next week :)

No worries, everything happens in good time 😌 have a great week!

Where an I? Is today Monday?

A big confused and bewildered congratulations to @livinguktaiwan who picks up the evergreen 33 prize! HBI is in the works!

Thanks as always for sponsoring the EL!

Congratulations to the winners and to everybody in this Leage anyway.

I also want to congratulate @chrisrice - your little prize for the Lucky Number 12 is on its way to your wallet :)

Thank you, wish you all a wonderful week.

@misterengagement 57
11 months ago
Thank you for your engagement on this post, you have recieved ENGAGE tokens.
0
0
0.000
Reply

Thanks as always for sponsoring the EL, and for the re-blog. Have a great week too!

Hey @abh12345, here is a little bit of BEER from @johannpiber for you. Enjoy it!

He's doing some really nice work for engagement and I'm happy to see him at the top :)

Thanks for the sponsorship of the contest from OCD and nice one for continuing it... I'm not competing with the top tier though, that's some serious levels of engagement!

You rock with 9 posts. I always have just 5 hehe

I think I'll try and keep to one per day or less going forward - it's tough to think of original posts each day - some people are epic at doing it though!

You even have to try to keep it one per day :D

Just managed to squeeze one out tonight :D

I am just working on some counting work for hive open mic hahaha..I don't see anything else, it was the week 47 and 47 entries! Is it possible? I have to check everything out, again . Can not do a post now...

Lol! Thank you - you must be hard wired in to the blockchain, that was instant 😃

I will have tendonitis from this 🤣

And yeah, top 10 seems well out of my reach these days.

Congratulation to the top 10

Thanks a lot @silversaver888

Congrats to you, too! ♥️

Thank you @silversaver888 and congrats to you too

Special congrats to @mipiano I'll send ya' your prize right away :)

Thanks as always for sponsoring the EL jongolson!

Always man, it's my pleasure! Least I can do!!

Thank you very much Jon, received 👌

Congrats @kemmyb for your lucky number: some SBI on his way.

Thanks for your continued commitment, dear @abh12345!
I have several lucky numbers in arrears to be rewarded...now I'll provide!

Thank you for the SBI! 🍀