Even space companies are too big to fail now? Or is it more a matter of creating some competition for SpaceX and the space industry as a whole?

Word on the street is Billionaire CEO Bezos and his space company Blue Origin could be up to receive funding to pursue NASA mission to return to the moon despite loosing the initial bid to SpaceX just last month. Thanks to an amendment made earlier this year to the Endless Frontier Act, which aims to accelerate America's pursuit of scientific and technological innovation through investments in key industries, Blue origin may still receive funding.

You'll likely remember SpaceX being awarded the lucrative NASA contract late last month and Elon taking the opportunity to kick Bezos while he's down with a well timed tweet: 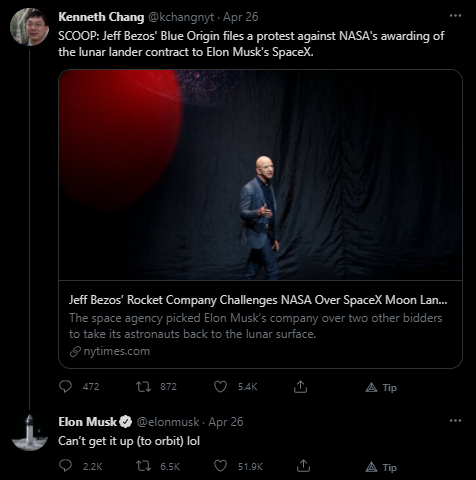 Bernie To The Rescue

Bernie Sander is at it again essentially attacking Bezos and Blue Origin in an attempt to deny them tapping into the amendment made to the Endless Frontier Act and has coined Bezos' efforts the "$10 Billion Bailout".

Not a bailout in the traditional sense but certainly without the NASA contract Blue Origin is left hurting for business, there's only so many companies awarding space contracts after all.

It may help Bezos' case that Amazon is headquartered in Washington, which is the state that Sen. Maria Cantwell, D-Wash represents. After all it is Sens. Maria Cantwell, D-Wash., and Roger Wicker, R-Miss., that are responsible for introducing the amendment that allows the Endless Frontier Act to fund an additional $10 billion.

The idea is that the amendment could be used to help America produce not one but two teams to continue working on the lunar lander mission.

Should the richest person in the world be after free money despite losing out on the NASA contact fair and square?

I can't blame him for going after the funds if that's what they've been ear marked for but seriously, the richest person in the world needs corporate welfare to keep his space dreams alive? Maybe he should cough up his own money or maybe even just leave this one musk and his SpaceX company. #holdmybeer

I don't truly understand the ins and outs of these business... but it seems odd that they're talking about a $10B bailout for Bezos in the same week that his other company purchased MGM for $8.5B. Amazon couldn't have bailed out Blue Origin?

Definitely awkward timing, wonder if it hurts his case..

Maybe Amazon should just attempt to colonize the moon and eventually do deliveries there! So now its the war between Elon Musk and Bezos to control the space. This is just a brilliant piece of information. Thanks.