Bring Back Cheetah Bot (Or Something Similar) 🐱🤖🔍

@ashleykalila 63
8 months ago
Proof of Brain

For those of you who don't know @cheetah, cheetah is a bot that scours all the posts on here and checks for plagiarism.

If it finds a post that has been copied from elsewhere on the interwebs, cheetah will leave a comment as demonstrated below. 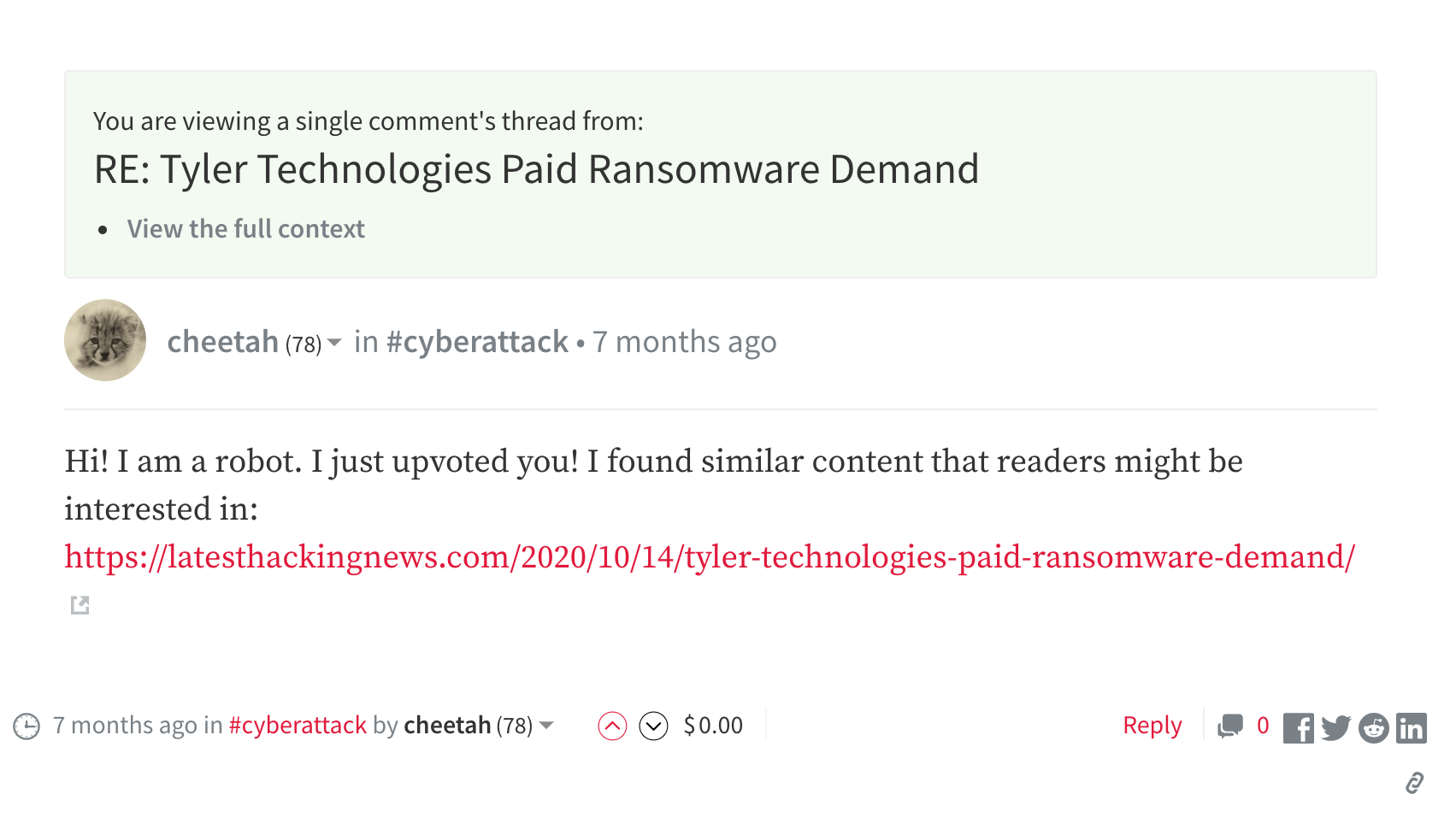 This was Cheetah's last comment on the blockchain which was 7 months ago.

What happened to Cheetah? Why did it retire?

It was handy because it immediately let you know that perhaps someone wasn't writing their own posts so you can decide to upvote them or not. And also everyday Cheetah would post an overview of all the comments the bot left. 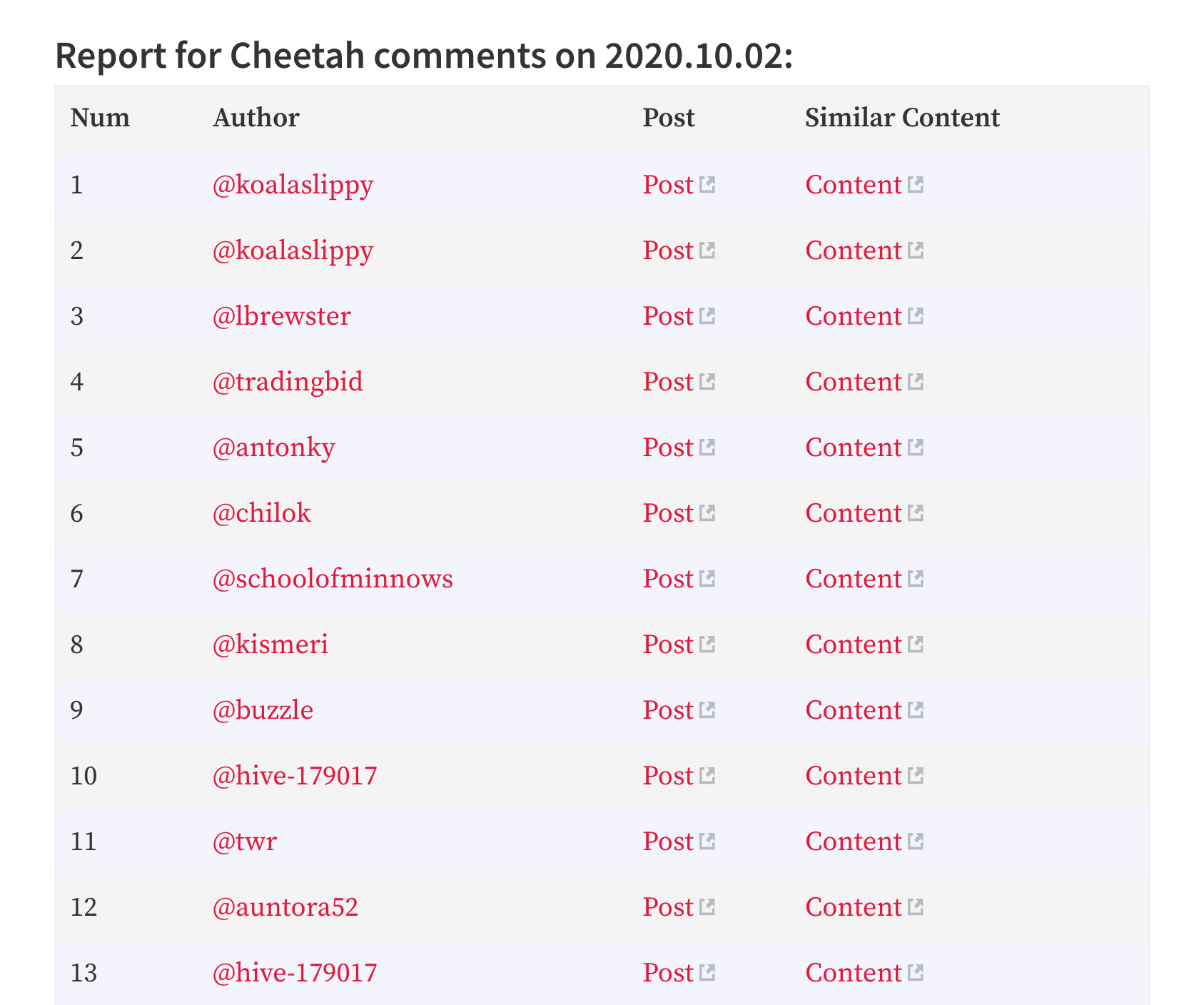 Cheetah was created by @anyx who unfortunately has left the blockchain (it seems).
And with that, the end of cheetah.

As you can see, cheetah was a super handy tool that in combination with manual anti-plagiarism curators, it could work really well. And also for others who want to upvote a post, it's like a little sign saying 'oh maybe double check this person first before giving them my precious upvote'.

So I am suggesting that we bring back cheetah!
Or make something similar.
Maybe something already exists, I just haven't found it yet.

Just my 2 cents on the matter!

Do you know if it will be able to detect paraphrased posts as well?

I don’t think so.
Perhaps someone is able to make it😌
That would save so much time ey?
Would be pretty awesome!

Perhaps someone is able to make it😌

It will really go a long way

for now, we just need to keep our eyes on the look out for such contents

yeah it can only do so much but is a good post, Cheetah at least made me change some votes after being fooled a few times. It's up to us to use downvotes but I hate doing that. The best is to do some research I suppose on the persons blog and just trust your gut instincts? hard to say, part of the game but maybe cheetah comes back in some other form.

sidenote/ POB is becoming pretty tight and I def want to get to know you all better and hang out in chat etc., Am going to use my delegation I got wisely and am def very far from a whale but am really attached to POB . Full Uv, wanna have "the ladies" be rising up together.

I am glad to know that you love the community and you are willing to hang out with us. We welcome you with all our hearts. And we promise it will be all fun for you. Yes, the ladies will try as much as they can to rise together. And becoming a whale will be quite easy for you if you put in the desired effort. I guarantee that. Cheers

Yeah exactly. I found it a very helpful tool! :)
I hope someone picks it up.
I understand that there are other projects that may need extra attention first but hopefully it'll be made somewhere in the future!
Yes, I love the POB community too. A lot of good eggs!

It had several complaints being spammy and people don't like bots commenting on their posts. Running it also adds additional costs to the program. I think Anyx is still working on the blockchain as a witness, they still have their node up. Anyway, most antiabuse efforts are just ignored as it's not people's problem unless they get directly affected. It's always someone else problem that plagiarized posts get rewarded than honest content creators.

And that’s why I think it needs to be highlighted and paid attention to😇
If we are going to make this place better, we need to do it together right?

there's something going on with lag and votes or something because I just see zero's when I click on the upvote list and I gave good upvotes...weird, hrmmm

Yeah with the amount of plagiarism I have seen reported already here on POB we need something to help out the problem. I agree with you 100%.

Yuuup!!
I hope that a dev sees this and decides to do something with it :)

Please no - cheetah was detecting a lot which also was original content and it was driving away many good content creators - while plagiarism is still an issue I would prefer no police accounts that also failed a lot anymore. But that is my 2cents only.

Oh really? I must have missed that!
I was just thinking of ways to combat all the abuse on here :)
The manual curators are doing their best but there are posts that do 'slip' through.