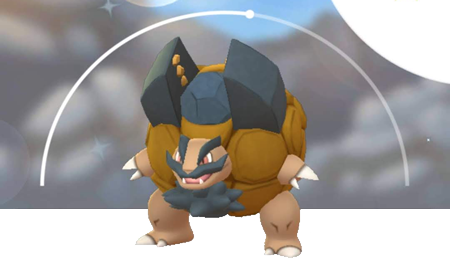 I met up with 2 friends to walk around, the 3rd one that we usually also walk around with during these events didn't let us know if he'd be there or not and we didn't see him.

The day started off kinda cloudy here, but in the afternoon turned more sunny. Unfortunately the in-game weather started off as Windy weather, so no weather boost for the Geodude at all. Part of our city, including one park area, is in a different weather cell. Eventually we walked there too and surprisingly it was partially cloudy in that weather cell! So we tried to stay in that cell for a while too to make sure we got some weather boosted catches in. It's a smaller part of the city though and after some time we went back into the main part, which sadly never got weather boost. So we did return to the part with weather boost later on when there would be a lot of new spawns.

Just before the event started I made sure to Mega Evolve my Manectric so it was ready for potential Tapu Fini Raids after Community Day and of course to get additional XP and Candy from Geodude because of the Rock- and Electric-typing for Alolan Geodude. Here are my Pokédex and Geodude stats from before the event. Including the Stardust because of the 3x Catch Stardust to see how much I gained. 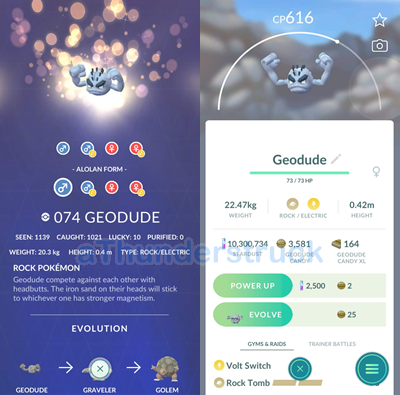 And here is a screenshot of the Pokédex and Geodude after the event. This is before I transferred the majority of the catches. 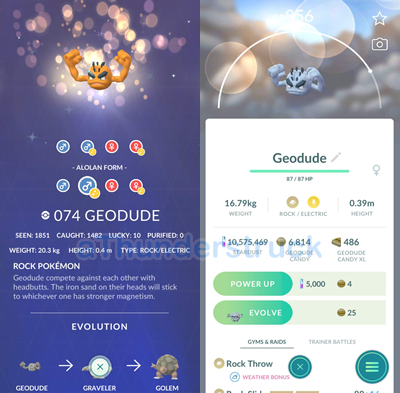 That's pretty good, it allows me to also evolve quite some Geodude to Graveler for exp during Spotlight Hours that have 2x Evolve XP. Although I'll have to catch some new Geodude in the future, because right now I'm transferring almost all the ones from Community Day to have storage space for GO Fest early next month.

During the Community Day I managed to get this 100% IV Alolan Geodude! 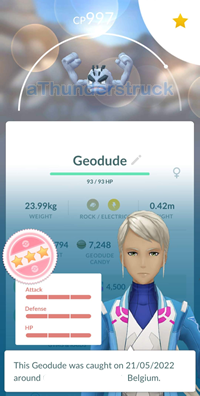 Which I evolve to Alolan Golem shortly after the event to make sure it learned Rollout. I then powered it up to level 40. I have enough Candy XL to also power it up to 50, but I'm not sure yet if I'll do that because there are stronger Rock-type attackers that would be better worth the Stardust cost. Although I do have enough Stardust so it's a bit of a dilemma 😂

In my blog post about the Community Day, I showed the Shiny Alolan Geodude I already had, which had terrible stats. So let's take a look at the Shiny in this event. In these screenshots I first filtered on Shiny Geodude with age0 indicating caught within the last 24 hours. Then I added "&3*" to see if any of the Shinies were 3-star. This also works to look for 4-star Shinies, but I already searched for 4-star Geodude so I knew there wasn't one. 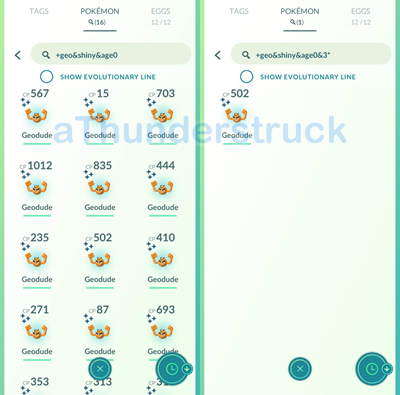 I caught 16 Shiny Alolan Geodude during the Community Day and yay one of them was a 3-star! 😄 Most likely from the Geodude caught when we were in the weather-boosted part of the city. I chose to then evolve this 3-star Shiny Alolan Geodude to Graveler and then to Golem.

How did the Alolan Geodude Community Day go for you?