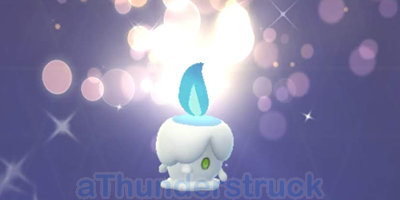 Ahoy! This past weekend, on Saturday the 15th, the October Community Day took place in Pokémon GO. This time it featured Litwick, the Candle Pokémon. Litwick was already featured in the event that took place around this weekend and the event a week beforehand too, allowing people to try and find a good Litwick prior to the Community Day. Shiny Litwick however was not available yet during those events. The Shiny Litwick made its debut during this Community Day.

Just like last month it took place from 2 pm to 5 pm local time. The bonus with this Community Day was 3x Catch XP. Also bonuses for 2x Catch Candy, 3 hours for Lures and Incense activated during the event, but those bonuses are always active on Community Days now.

Evolving Lampent, the Lamp Pokémon, into Chandelure, the Luring Pokémon, during the Community Day or up to 5 hours after the Community Day would teach Chandelure the new Charged Attack "Poltergeist", a Ghost-type move. It is apparently not a really solid option unfortunately compared to Shadow Ball. Despite that I still evolved some of course, maybe they'll make the move better in the future. I prefer having the Community Day move on at least one Pokémon of the species anyway so I'll just keep it regardless.

Now let's take a look at the stats of Litwick that I had before and after the Community Day. I already had a 100% IV Lucky Chandelure since 2019 which I gave a Fire-type moveset. I took screenshots with that one to look at my Litwick Candy. The two screenshots on the left are before the Community Day started and the ones on the right from after.

Almost 400 Litwick caught during the Community Day. Also a lot that ran away, but that's because I've been using the gotcha a lot for the catches. Perhaps without it I would've caught more, but maybe not, it's kinda hard to tell. I usually prefer using it. The 2x Catch Candy made it 6 Litwick Candy per catch. I had my Mega Gengar at Mega Level 3 active, which further boosted it to 8 Litwick Candy per catch. Which, for the 397 catches amounts to 3176 Litwick Candy. However the stats display I got 3184 Litwick Candy. I guess I must've caught one more between the after Litwick Pokédex stats screenshot and the stats on Chandelure.

I also got 449 Litwick Candy XL from those 397 catches. That's almost enough to potentially power up two to level 50. These stats were before transferring many of the bad stats Litwick, so I'll get to 600 easily. Not that I'm really planning to power up any Chandelure to 50 right now, but it's always good to have the candy in case I'd wish to.

Out of those 397 catches, I caught 28 Shiny Litwick during the Community Day.

I then filtered the search to 3-star and found that I caught a few 3-star Shiny Litwick. One of those was even a 96% IV Shiny Litwick, so since that was my highest IV Shiny Litwick I decided to evolve that one into Shiny Chandelure.

This Community Day was so much better than last month!

Last month it rained a bit during the Community Day and then during the last hour it started raining so much that our group basically had to take some cover somewhere from the rain and couldn't really catch much anymore.

I'm really glad during this Community Day the weather was much better! We even had a lot of sunshine so I ended up taking off my jacket at some point because it was warm enough in a sweater. I enjoyed this Community Day. We also walked around with a bigger group than usual, which was also fun. There were a lot of other people playing too that we sometimes ran into.

Overall a really great Community Day. I think I'll evolve quite some of the bad stat Litwick as well for some extra XP from evolving them, since I have a lot of Litwick Candy now and it seems better to use some of that Candy to evolve and get XP.

Did you participate in the Litwick Community Day, and how did it go?

I still don't have a decent Litwick I need to get out more !LOL


Did you hear about the Irish guy who was assasinated at the antique store?
It was a knick knack paddywhack!
Credit: reddit
@athunderstruck, I sent you an $LOLZ on behalf of @new.things

Oh damn and it was just in the wild a lot with the recent events. I hope for you it still shows up regularly this month so you can try to look for a great one!

very nice glad you got to do the C-Day

Thanks! I was glad about that too, and yeah I was surprised that I got that many Shinies. It's unfortunate you didn't get to play the full one this time.

and what a nice amount of shinys