Lucky and Shiny from Halloween Event

Ahoy! The Halloween event in Pokémon GO has finished this past November 1st in the morning, at which point the Día de Muertos event immediately started.

Honestly the Halloween event was quite a letdown. Sure, some new Shiny Pokémon made their debut (as well as some new costumed Pokémon), but where was Spiritomb?? Last year I believe we had Spiritomb Research Tasks throughout the whole Halloween event, maybe even the whole month of October but I'm not too sure about that.
This year there was not a single Research Task from PokéStops during the event that had a Spiritomb encounter. Not even one from the Special Research, which really should have given at least one Spiritomb encounter.
The only way you could get a single Spiritomb Encounter this Halloween event was from the $5 Timed Research ticket. Which doesn't make any sense to me. Locking it behind that ticket this Halloween event was such terrible practice. Especially because it has already been available in the Special Research for Halloween the past years and even in Field Research tasks last year.

The only good thing about the Halloween event was that Zorua made its debut. Although there have been A LOT of issues with Zorua's release :/ Right now they're also not tradeable for some reason, I hope they will be soon as some friends and I kept a whole bunch of them.

When the event started I was checking if there were any Pokémon that I still had to get Lucky from those with increased spawns during the event. I kinda thought I had all of them already, but I checked and I didn't have Spinarak Lucky yet! I guess I keep thinking I do have it Lucky even though I don't. So during the event I asked friends to keep some and trade them to me until I got a Lucky Spinarak. This time I didn't keep track of the amount I got from trades, but it wasn't a whole lot as you can see from these Pokédex entries before and after getting it Lucky. I also evolved it to have Lucky Ariados too.

Apart from Spinarak and Ariados, I also didn't have Lucky Golurk yet. I do have a Lucky Golett though from longer ago that I just never evolved yet. I couldn't find that in the screenshots I've taken so I guess I still have to evolve it. I'll include it in another post then when I do evolve it.

Here is a screenshot of the search result from my Shiny Pokémon this event and the stats of a few. I included the stats of my first Shiny Galarian Yamask encounter, but as you can see I also have a higher CP one so that one might be a bit higher IV depending on its attack stat.

There are 4 Yamask here, it might be hard to tell but one is the regular (from Unova) Yamask and the other 3 are Galarian Yamask. The Shuppet and Unova Yamask aren't that great IV wise.

It's a bit strange that Pumpkaboo didn't get its Shiny debut until the second part of the event where was suddenly wearing a costume. I did encounter one Shiny! As you know, Pumpkaboo and Gourgeist come in Small, Average, Large and Super Size which is noticeable everywhere that you see them. When I view my Pokédex the Shiny symbols only appear next to the Large Size one because that's the Size of the Shiny I encountered. 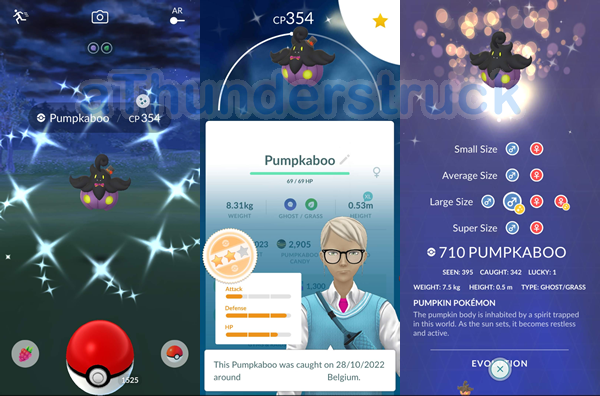 So yeah from the spawns this Halloween event I now just have to evolve Lucky Golett to Golurk and well I do also have to get Lucky Zorua but that won't be possible until it can be traded. That Lucky Spinarak is helping me closer to level 49 as I still have to receive some Lucky Pokémon from trades. Not a whole lot of Shiny encounters this event, though the new Pumpkaboo Shiny was a really great encounter!

How did the event go for you?

Yeah I don't get debut shinies regularly either (unless their debut is at a community day event), so that one was such a pleasant surprise!

speaking of com-day I hope Decembers will be great😎👍

I hope so too! I think there's a few that I didn't get a 3-star Shiny from throughout the year so that'll be great and looking for improvements in general for some of them as well! I hope the weather will be good those two days!