This event where they were introduced has already been much earlier during this month, but I haven't really been posting and so I just didn't get to this yet.

Here are screenshots of when I caught my first Morelull during that event and had its Pokédex registry. Also the stats of the first one I caught. 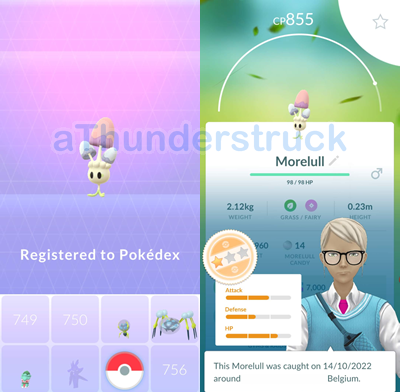 Just like with other events when a new Pokémon makes its debut, I often try to trade them with friends to get it Lucky in the Pokédex. I used to hold off on that because I'd prefer catching their evolved form in the wild for the Pokédex registry, but usually you might have to wait a really long time before ever encountering the evolved form in the wild for newly released Pokémon. That's why I decided I'll just try to get the ones that make their debut already Lucky and evolve them.
With that said, I do have some Lucky Pokémon in my storage that I still have to evolve. I kept them some of those Lucky because I'd prefer to first find their evolution in the wild for the Pokédex registry, and still haven't gotten to evolving them.

During that same event I managed to get a Lucky Morelull from trades and evolved it in Shiinotic. This one just requires 50 Morelull candy to evolve, nothing extra. Here are screenshots of the Lucky one I got and then the Lucky Shiinotic Pokédex registry. 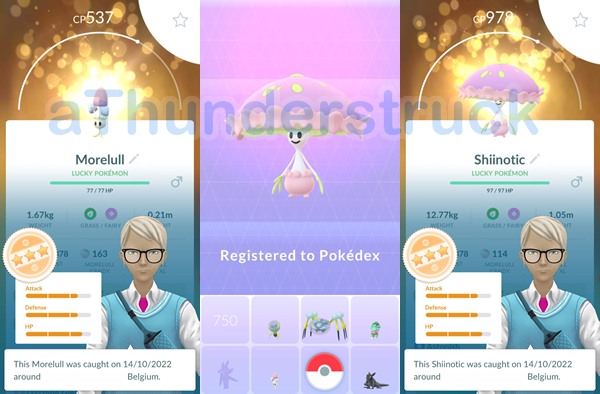 Let's take a look at my Pokédex stats too. I got this one from trades with a friend pretty early on in the event before I even really caught that many. Which you can see in these Pokédex stats.

Maybe you remember from another recent event with Mareanie making its debut I had to trade around 80 of them before I got a Lucky Mareanie!!! That was so crazy!! Because of that I decided that I'll just keep all of the Morelull from trades until I got a Lucky one, to see how many it would take before getting it Lucky.

That's included in the last screenshot of this next picture. 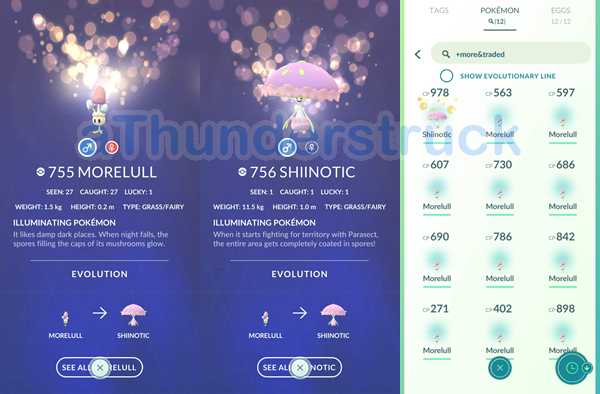 As you can see I filtered on +more (to get the full evolution line of any Pokémon starting with "more") and filtered on traded. Then sorted by recent. The result is 12. So to get this one Lucky I have definitely been more lucky than with Mareanie.

Going forward I will probably often try to keep the ones I get from trades until I get a Lucky, to have an overview of how lucky/unlucky I am with some.

Getting that Lucky also brought me a bit closer to level 49.