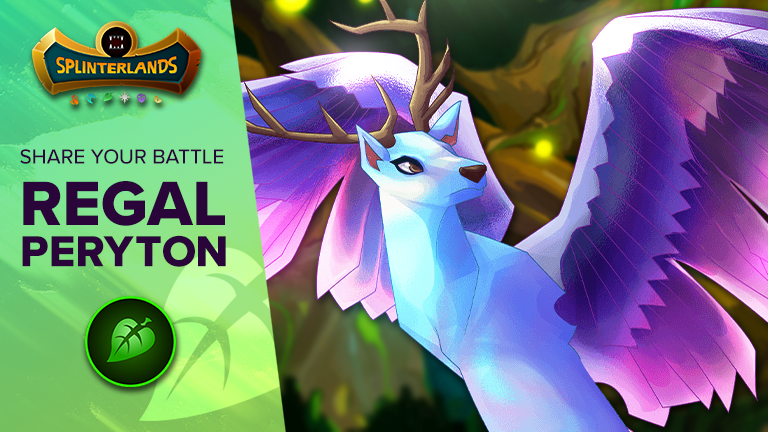 Thumbnail for the weekly challenge provided by @splinterlands

Ahoy! It's been a while since I participated in one of the weekly battle challenges. I often keep thinking I should write a post in the weekend, but then end up getting busy and not writing one. I hope that this one will still be in time before the deadline is reached! When I look up the deadline time this should be in time. It would be best if I tried to make a habit of joining the battle challenge before the weekend though.

In this week's battle challenge, the Regal Peryton is featured. A gorgeous looking card from the Chaos Legion set.

I currently have this card at level 3 where it looks like this. 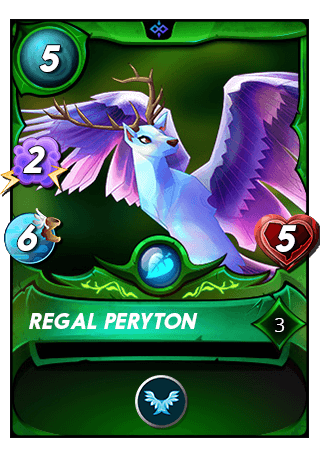 Just like many of my Chaos Legion Rare cards I still actually have to level it up further to its highest potential in Silver league and then continue working on levelling them for gold and up as well.

At level 3 it has 2 Magic Attack, 6 Speed and 5 Health with the Flying ability. This high speed and Flying combo gives it a good chance to dodge some Melee and Ranged attacks. At level 4 it gains one more health, which would be good for those cases where it does get hit that it might survive an extra attack.

The card can pair really well with Obsidian and Delwyn because of their buff to Magic Attacks. It's also useful with other Summoners, it just doesn't get an additional buff to its damage then.

In the battle I want to share today I was using the Regal Peryton with the Obsidian Summoner. My opponent used the Summoner Tarsa. This battle took place earlier today in the Modern Format. Here is a picture of the initial lineups from both sides. 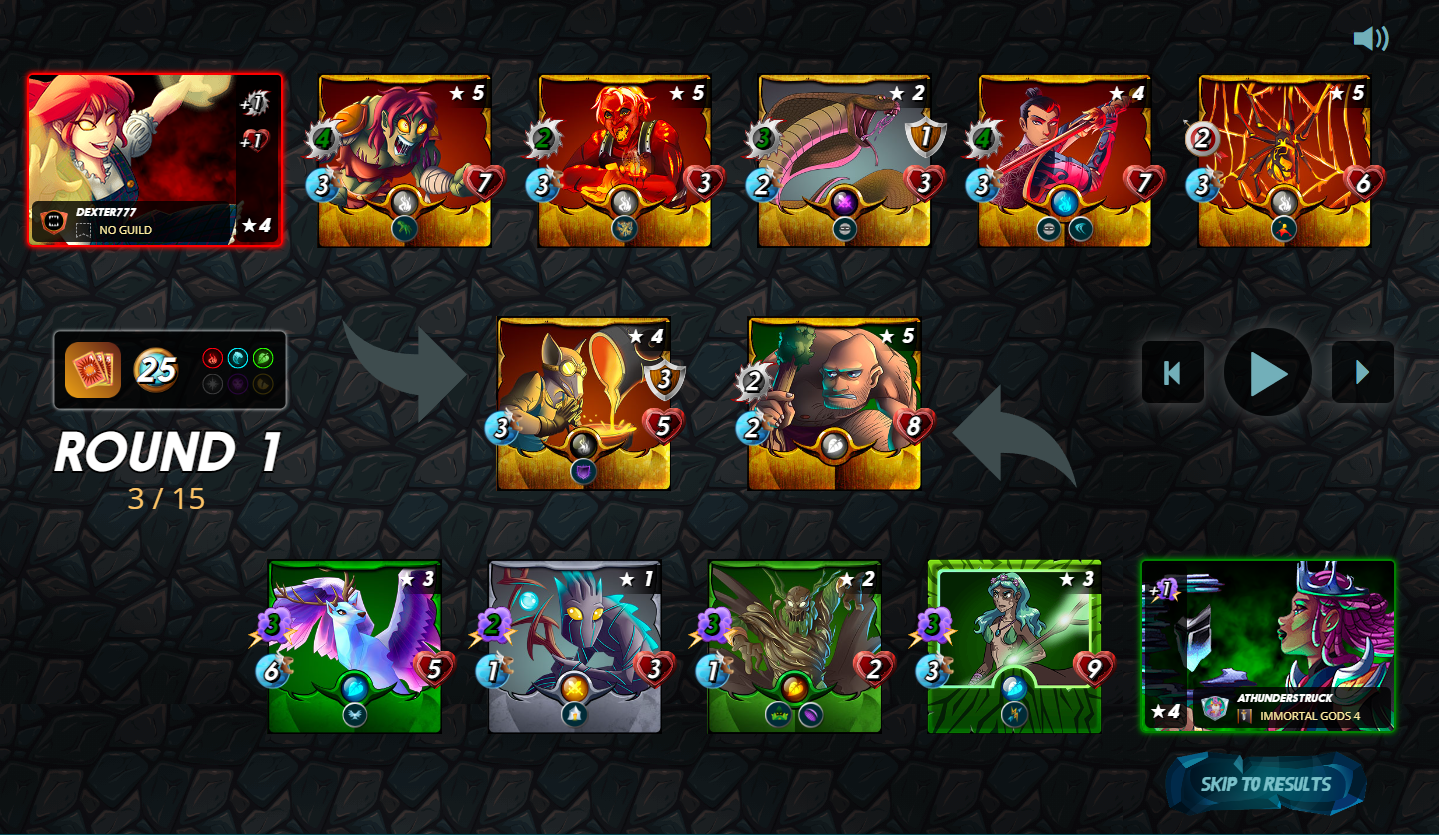 And here is a link to the battle so you can check it out: https://splinterlands.com?p=battle&id=sl_cbd7491bec6e5eff4edd0d0950176827&ref=athunderstruck

In this battle the Fire, Water and Earth Splinters could be picked. The battle had a 25 Mana Cap. Only one ruleset this battle:

With the Odd Ones Out ruleset active, it cancels out a lot Monsters from being able to be played. It's a relatively low Mana Cap so it's better to use Monsters that are below 10 Mana for sure. Seeing the ruleset, mana cap and available Splinters, my initial go to was immediately to go with Obsidian for that sweet buff to the Magic Attacks. Which would allow me to use the Regal Peryton as well!

As a tank I chose to use the Hill Giant, with its 3 mana cost it makes an excellent tank as it comes with 8 health at level 5! Which is the highest level for Common Cards in silver league where this battle took place. Up next I chose to use Centauri Mage, quite costly in this low mana battle with 7 mana but it has good damage and 9 health at level 3. Once my tank would go down it'd be a great secondary tank. It also has the Return Fire ability so once it gets hit by Ranged Attackers it will deal some damage back to them.

That's already 14 mana spent (4 for Obsidian, 3 for Hill Giant and 7 for Centauri Mage), that leaves me with 11 mana left. I chose to put Regal Peryton in the back for 5 mana, with the high speed and Flying ability it has a decent chance to miss my opponents attacks should he choose to bring monsters with the Sneak ability. Then I had 6 mana left so I decided to bring 2 Monsters with a 3 Mana cost. The first one is Djinn Biljka, pairs well with Obsidian but has low health. At least if it gets in the first position it might not die immediately if it gets hit by a low Magic Attack thanks to the Void ability. The last card I picked was Spirit Hoarder for 3 Mana as well. Another slow monster, but it gets a damage buff by Obsidian and if my Centauri Mage or Regal Peryton take some damage, it can the Triage ability to heal them a bit.

Yes, my strategy was definitely a good one! My opponent assumed I might go with Magic Attacks as they put the Venari Heatsmith up front with the Void Armor ability, but my Regal Peryton, Centauri Mage and Hill Giant worked well together to take it down in the first turn. Which allowed the Djinn Biljka and Spirit Hoarder to severely damage the Radiated Brute. My opponent brought the Lava Spider with the Snipe Ability, so it was hitting my Centauri Mage causing it to take damage from the Return Fire ability.

My opponent brought some Monsters with the Sneak ability like I predicted. They had 3 and 2 speed respectively. Thanks to the difference in speed and the Flying ability on my Regal Peryton they both ended up missing in the first round. By the second round one of the Sneak ability monsters was already in the first position so only the Tenyii Striker was able to attack my Regal Peryton and missed again.

With all of my Magic Attackers having 3 magic Attack thanks to Obsidian, they took out my opponents monsters quickly once the Venari Heatsmith had been dealt with. Even so quickly that my Hill Giant survived the battle with 1 health! With none of my Monsters having died, this battle was a flawless victory!

Absolutely! I really like using this card in battles like this. Also in general it pairs with with Obsidian with the Magic Attack buff and its high speed often allows it to deal some good damage quickly. Sometimes it does get a bit unlucky against Sneak Monsters when they properly hit it, but at times like shown in this battle it can also dodge their attacks really well.
Its Flying ability also makes it a great card to use in the Earthquake ruleset.

My strategy for this battle was flawless. It does of course come down to RNG whether or not those Sneak Monsters would've hit my Regal Peryton or not. If one of them did, my Spirit Hoarder might have healed some health back to allow it to take more hits. In the case of both those Sneak Monsters hitting my Regal Peryton in the first turn then this battle may have looked completely different because I'd lose a lot of damage output. In that case my Spirit Hoarder would've definitely gone down from the next Sneak Monster attack. I think I would've still won the battle, but it would've been close.

Eventually I will level up Regal Peryton to level 4 where its health will go from 5 to 6. That extra health can make a difference in taking some hits, especially if it can get healed by the Triage ability. In this battle we didn't see it happen as the Regal Peryton dodged all attacks, but it could've happened if it did take damage.
I will probably focus on getting Kelya and Diemonshark to level 4 though before upgrading the Regal Peryton.

That's it for my battle challenge this week. Thank you for reading!