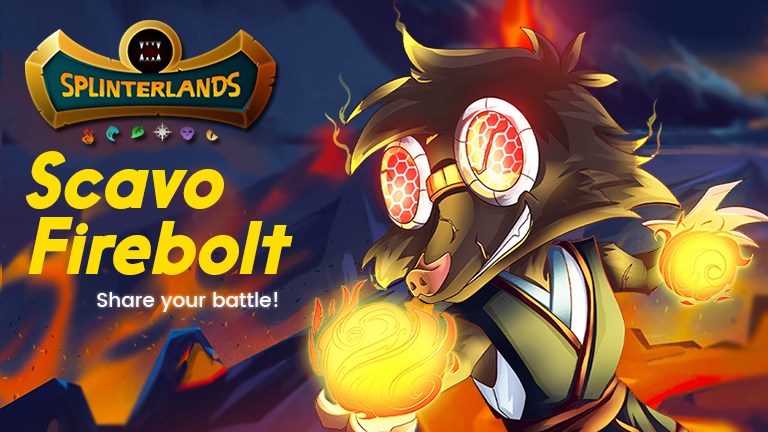 Thumbnail for the weekly challenge provided by @splinterlands

Ahoy! In this week's battle challenge hosted by @splinterlands the Scavo Firebolt is featured. It's a Rare Fire Monster from the Chaos Legion set. Right now I have this card at level 2 and at that level it looks like this: 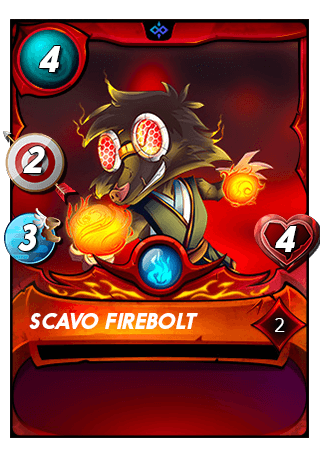 This card is not really a priority for me to level right now. It can pair well with Yodin Zaku, but my Yodin Zaku is only level 1 so I can only bring Rare Monsters at level 2 when I play him.

At level 6 it gains the Knock Out ability, which can pair well with a Monster in the team that has Stun and preferably higher Speed than the Scavo Firebolt so it would be able to hit the Stunned Monster quickly. Its Ranged Attack maxed out at 4 damage starting at level 7.

The battle I want to share with you this week is one where I played Yodin Zaku against Thaddius Brood. Here is a picture of the initial lineups in the battle I'm sharing. 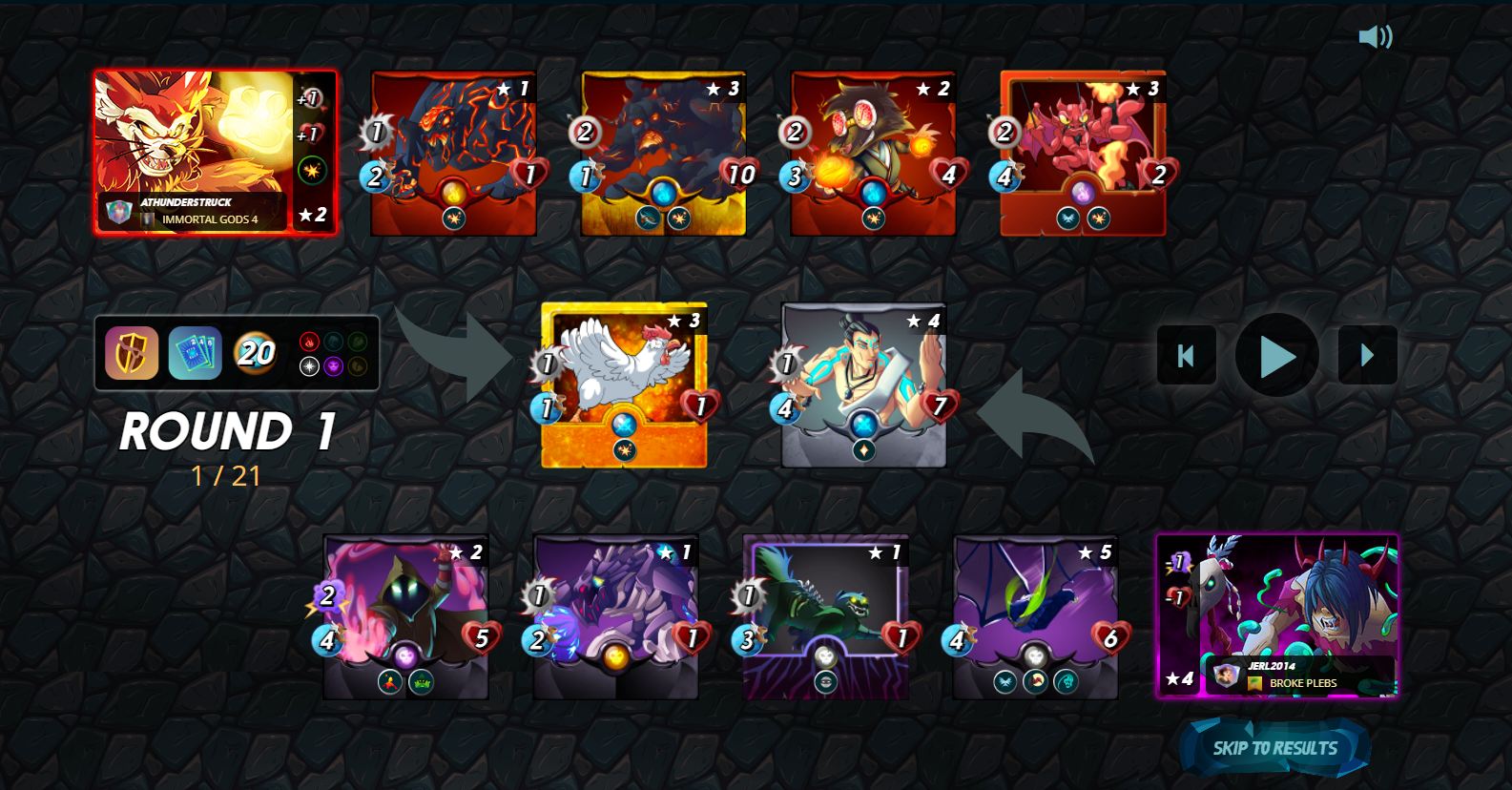 And here is a link to the battle so you can check it out: https://splinterlands.com/?p=battle&id=sl_de278e09e0f534dee3ff6ab8d12ddce2&ref=athunderstruck

In this battle the Fire, Life and Death Splinters could be picked with a 20 Mana Cap. The rulesets for this battle were:

With the Even Stevens ruleset active, a lot of Monsters could not be played. In this low Mana battle I might have preferred to go with some Sneak Monsters, but the majority of them and especially from the active elements, have an uneven Mana cost. I gave the Death Splinter a thought, with the Cursed Windeku and its Thorn that could be a good tank. But then I thought, perhaps it's better to go with Yodin Zaku as Molten Ash Golem has Close Range so it can be a good tank and still use its Ranged Attack. I also remembered I saw that the Scavo Firebolt was featured in the weekly battle challenge and figured this could then be a great time to pick it!

I picked the Furious Chicken and Scorch Fiend as my first two Monsters. Their 0 Mana cost could allow them to take two hits from the enemy, giving my Ranged Attackers more time to deal out some damage.

The Molten Ash Golem was next in my lineup because the Close Range ability allows it to still attack from the first position, and it has high health. Making it a pretty decent attack whilst still dealing damage. I placed the Scavo Firebolt next and then the Imp Bowman in the last position. With its higher speed and Flying, the Imp Bowman could then hopefully dodge a hit if my opponent did bring the rare Even Mana Sneak Monster.

Yes, my strategy was a great succes. Yodin Zaku provided my Monsters with +1 Ranged Attack, +1 Health and giving them all the Blast ability. This +1 health was taken away by my opponents' Thaddius Brood. They also tried to reduce my Magic Damage by 1, but I had no Magic Attackers so that part of the Summoner debuff did nothing against my lineup.

My opponent brought the Undead Badger, which is one of the rare Even Mana Monsters with the Sneak ability that useable with Fire, Life and Death. And my Imp Bowman successfully managed to evade the first hit!

All my Ranged Attackers had 3 Ranged Attack, so they defeated my opponents Xenith Monk really quickly, and thanks to the Blast ability they also took out the Riftwing with such speed! Although the only reason Riftwing died in the first round is because my Scorch Fiend also did damage to it, otherwise it would've been left with 1 Health. In which case its Backfire ability could've damage my team a lot if they ended up missing!

Right now I don't really have an opinion on this card because I've almost never used it. I think it can theoretically pair really well with Yodin Zaku, but for now I usually go with different options. It has a 4 Mana cost, because of that I think it could be a solid backline pick with the Little League ruleset when only Fire can be picked. Or in that same ruleset when Dragon is available too and then paired with Selenia Sky! One day I should give that setup a try if I'm renting Selenia Sky again!

At the beginning I mentioned how my Yodin Zaku is level 1, so I can only bring Scavo Firebolt up to level 2 anyway. But as you can see in the battle I did play with a level 2 Yodin Zaku! That's because I was renting a higher level one to potentially use in a few of my Brawl and Tournament battles. I only have a level 2 of the Molten Ash Golem, but I rented a Gold Foil level 3 which is the one used in the battle. The Imp Bowman is my own card.

If I was playing with my level 1 Yodin Zaku instead of the rented level 2, this battle could have been quite different. Because both the Molten Ash Golem and Imp Bowman would've only had 2 Ranged Attack instead of 3. It wouldn't have made much of a difference against the Xenith Monk, but I would've done less Blast Damage against the Riftwing. If I then ended up missing the Riftwing with some of my hits, there would've been a chance for me to lose the game.

I would like to see how that would've played out.

That's it for my battle challenge this week. Thank you for reading!