Rising Star is a game on Hive Blockchain. The game is based on building a music career for the character. The game is both fun and also gives us earning opportunities. I have been maintaining a total list of my earnings from day 1 on Rising start. I thought I will take this opportunity to keep a track of my earnings from the game. During the first week of the month, I'm thinking of doing an analysis of how my game progress is going and how much I had earned in the previous month. This will give me more motivation and would also help me do a self-assessment.

Rising star is one of the best games on Hive. The gameplay is very simple but the tokenomics is well handled. Only in recent months, the price of Starbits is not looking good. But otherwise, I would say the game tokenomics is really good for the players. I thought once a month I would run a report and find out how much I had earned from the game. It has now become a practice for people to calculate and share their earnings. Some people do it manually and some do it with the help of scripts. If the data is from Hive, we can easily use Hive SQL and get it, but if the data is from Hive Engine, we don't have SQL for it and we have to get the data with the help of a script. It is still doable but not very straightforward.

I'm thinking of creating a user interface for this so that even others can benefit from this but I'm yet to work on that. Data is always very interesting and if we can come up with tools to graphically view the data, it will be really awesome. Rising Star is one of the games on Hive Engine where the data is viewable. Some games don't manage it very well. In such cases, it can be really hard to calculate the data from the game. The rewarding accounts can be different or multiple making it hard for the data analyst to prepare the data. But if the game maintains proper data, it can be easy to prepare a report. 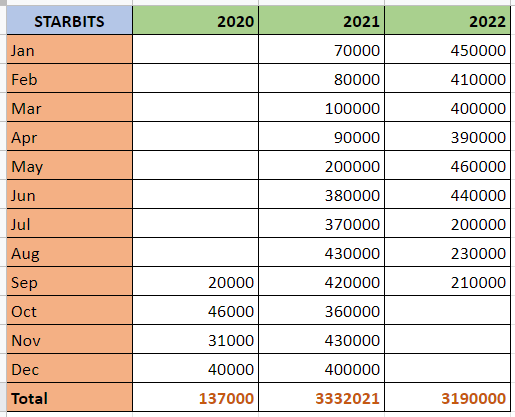 I have reached Level 129 in the game and the progress is going really slow. I still have to unlock one more zone. This is not a passive game but an active game. By active game, I mean that we have to keep playing this game. It doesn't generate income if we don't play the game regularly. If you look at the above stats, I have earned 20k less compared to the previous month. This is because I would have missed playing the game for many days. Hopefully this month I can compensate for the same. Let's see.

Even though the gameplay is simple, I still enjoy the game and I would like to increase my earning opportunity inside the game. Hopefully, I will have the time to spend on this game to review my cards and upgrade my collections by purchasing new cards. The game is releasing some new cards every now and then and during the launch of the new cards, they are easy to get but later after the card is fully minted, the demand for a card is high as the value in the market is high. This is just a start, hopefully, I will try to add some more data to the report next month.

@wine.bot 53
about 2 months ago
Congratulations, @theguruasia You Successfully Shared 0.300 WINEX With @bala41288.
You Earned 0.300 WINEX As Curation Reward.
You Utilized 3/4 Successful Calls.

The gameplay is simple but it's really slow to unlock new zones. I have been on the 3rd map for like half a year already but I don't have any XP cards.