Splinterlands is one of the best games on Hive and it is also very popular in the crypto world. About a year back they introduced a token called SPS and told us that it is going to have many use cases. One of the biggest use cases would be that people will be able to trade, buy or sell assets with the help of SPS. Now that the airdrop is over, I think they have been finding ways to bring some value to SPS.

It is good to see SPS getting listed on the Huobi Global exchange. I was expecting a listing on some other popular exchange like Binance but it is also good to see it getting listed on other exchanges as well. Huobi is also a good one and might have a good impact on the price and liquidity of the token. This is a great move and this can bring more fortune for the token and make people trade their SPS in one more place. This is also another place where the liquidity can spread out making it easily tradable. 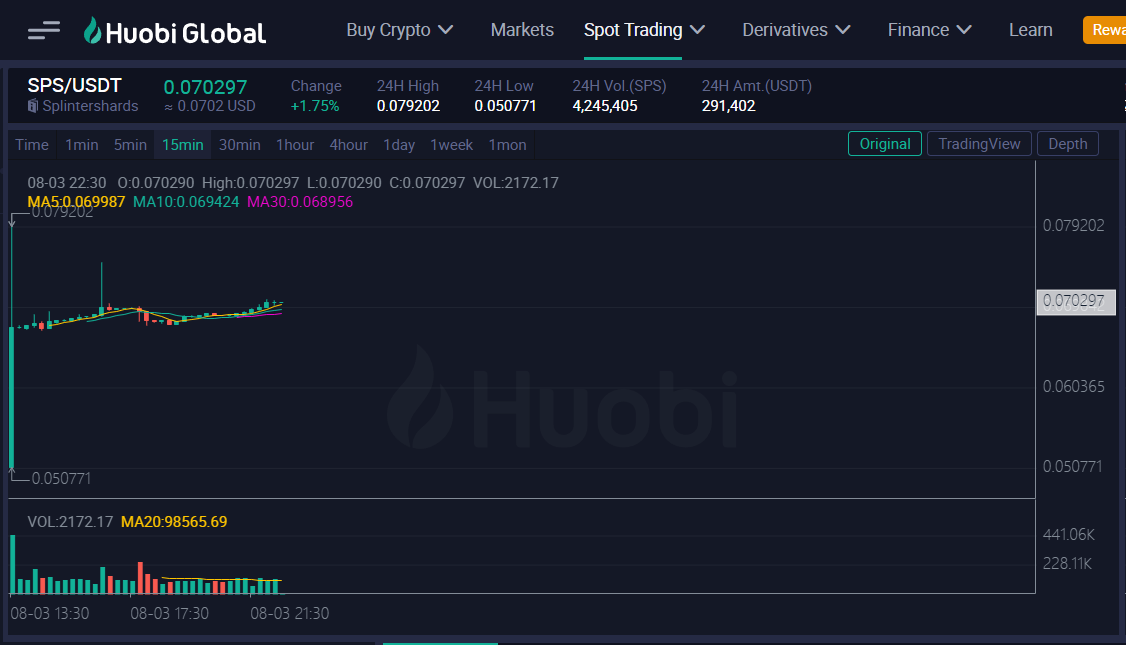 This SPS listing also brings other advantages for Hive users. If people want to trade Hive, there is now another option apart from trading Hive or HBD directly. They can now convert Hive to SPS on Hive Engine and take it to Houbi exchange and trade it there. This is one way to quickly convert the SPS to USDT or Hive to USDT. Considering the recent announcement by splinterlands saying that the rewards will be in the form of SPS tokens going forward, I think there is a high chance that the price of SPS can improve further if they bring more use cases for the token along with the supply. They recently stopped the supply that was through the airdrop and now soon they will start another supply in the form of game rewards.

I was expecting the price of SPS to go up after the airdrop was over because the daily supply would reduce and that's good for the tokenomics. At the same time, when they announced that SPS rewards will happen for the players instead of DEC rewards soon, I was a bit skeptical to understand if the price of SPS would go up or not. I think only time can answer this question.

I remember buying SPS when the price was around 1$. During those days the price of Hive was also high and the supply of SPS was very low. I spent about 2000 dollars to just purchase 2000 SPS. Today if I had that 2000 dollars with me, I would have been able to purchase a shit load of SPS. But yeah not big regrets. I still hope the price of SPS would improve and go over 1 dollar per SPS. If not in the near future in a year's time probably. Until then I'm going to stay staked and just enjoy the APR I get as a staking reward. As long as the price of SPS is good the APR is also nice.

Wow, This is huge for Sprinterland and SPS. It's just a start before listing to other big exchange like binance

If axie infinity like game token (SLP) is listed than Sprinterland being so many years around keep building more and more value they definitely deserves to get listed on Huobi and sooner or later other popular exchange.

I've tried huobi and their userbase or promotion, activities are going good.

They can now convert Hive to SPS on Hive Engine and take it to Houbi exchange and trade it there.

This one is so good for those who are on huobi and sps too!

More victories to come. Good to see world is recognizing real value or use cases.

You made a good point with the SPS Price that seems to just doesn't correlate with Market typical expectations and was traded 15x higher a year ago. I had a feeling it might go this way and sold 50% of the first couple of weeks, to buy them back later around 50c$-40c$, still too early in hindsight obviously.

To be fair, the airdropped amount of SPS while not pushing enough sinks, was and still is beyond crazy. The #hodl mentality of the #SPL -related Hivers makes 0 sense, we're lunatic diamond hands apes all together. The market turned against us, ok cool, we're early, we can sit that out. A good example are the voucher pools on HE, 0 added incentive yet, but still ~600k vouchers paired to all kinds of assets. Who in their right mind would do that, only convicted Splinterlands fanatics.

Considering the listing, should the price have spiked more heavily after the listing? I don't think so, the market is very dry right now. People look at the Blue Chip Crypto assets and know they can buy whatever they want and it will probably be 10x till late 2023. Makes it really hard to sell an SPS listing.

I purchased a lot of Sps around 0.6 dollars and I don’t have any regrets at all and have been holding my bag since then. Splinterland just keeps adding value to Sps and I believe it will skyrocket soon

@quekery, THE HiQ Smart Bot, has recognized your request. !PIZZA

Delegate [HP to @hiq.hive] or [BEE to @hiq.bee] to support the HiQ Smart Bot and its trails.

It's a matter of time before SPS gets listed on the famous exchanges like binance. It's attracting a lot of attention with it's popularity. Users having the tokens should keep hodling, the future is really bright

Not really sure if it will reach one dollar anytime soon… printing is still too high, rift watchers will lock a LOT of SPS in the community treasury but I don’t think that will be enough to fight such a high inflation. Once lands come around we will see how useful SPS really becomes.

This is just the stepping stone for the Splinterlands community unto greater things . It is only a matter of time before SPS gets listed on popular exchanges such as Binance .

I am not sure SPS will reach $1 per token. There is just way too much SPS but not enough use cases for it right now to reach that price.

great news! It's amazing how much the team is getting done with the price still being so low; although as others have pointed out the inflation for SPS is the real problem. But with more burns and use cases I see a positive future!

I am really good at gaming and my next project is to really engage in playing splinterlands on hive. This post has reaaly increased my interest in learning how to play and enjoy the game.

It is surely great news for the game's visibility in the crypto sphere.
Pool staking is a great opportunity to stabilize prices inside the Splinterlands economic arena.
Peace

I am expecting SP to reach $1 and above.