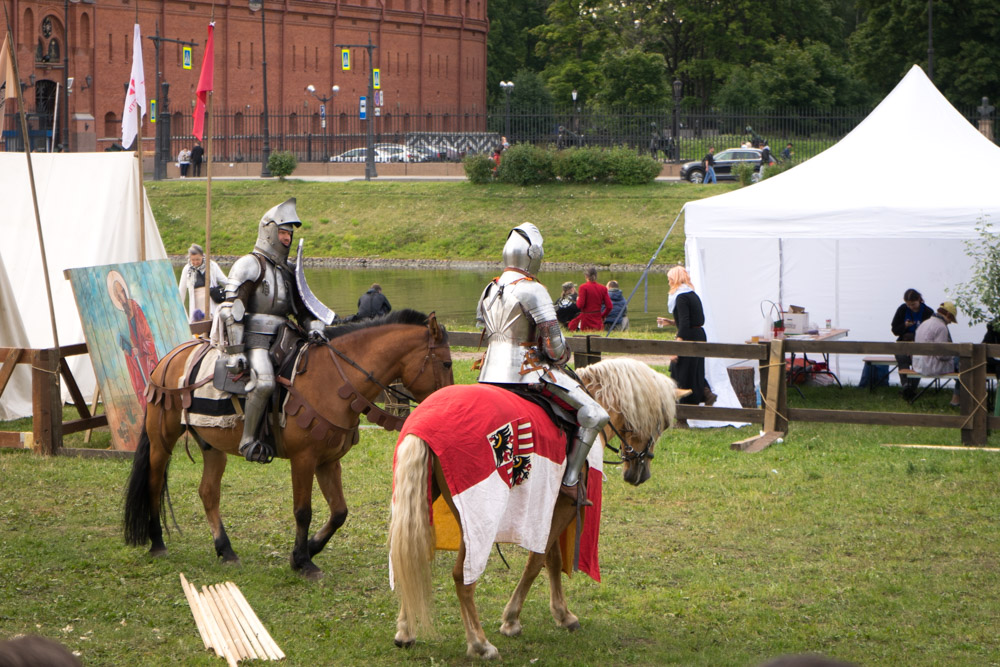 People love to dream. It is not harmful at all. It's bad not to dream. You can dream of a beautiful and rich life, you can dream of great love ... you can dream about anything ... too often I have mentioned the word "dream", it means that the time has come.
Today is a winter day, Friday, but why am I thinking about a time machine? I would venture to suggest that every person at least once in his life dreamed of going back in time ... to the past. Someone needs to fix something, someone would like to know something, and someone is just curious from childhood.
Yes, today is Friday, and I remembered #MarketFriday by @dswigle and decided to combine the two topics in one post. However, this is one topic. To get to where we are going now, you don't have to buy an entrance ticket. The time machine is free. But to try to do something ... yes, both before and now everything was bought and sold, nothing new. 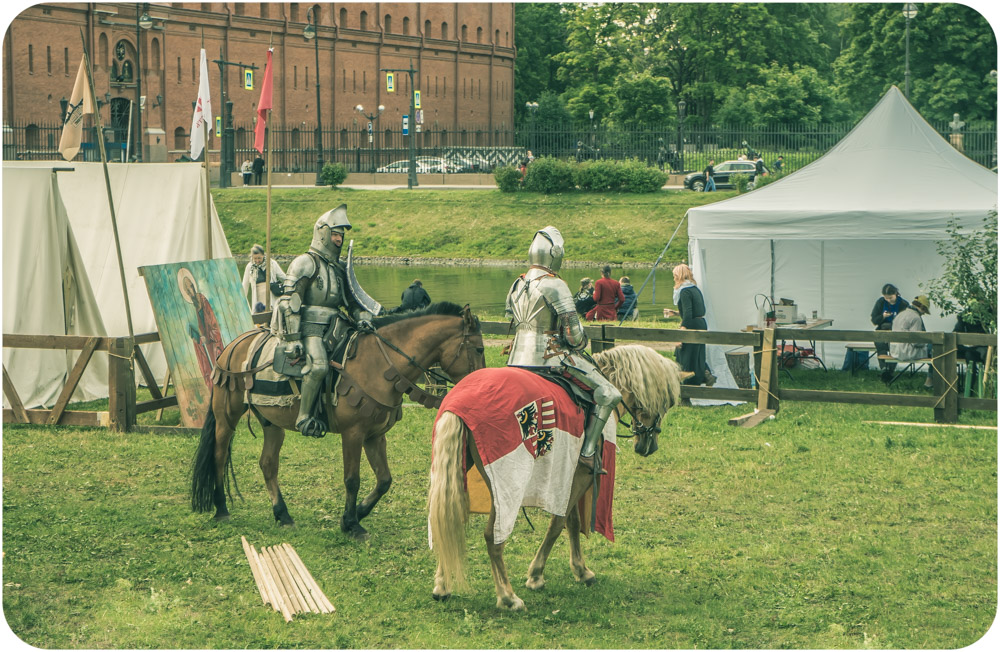 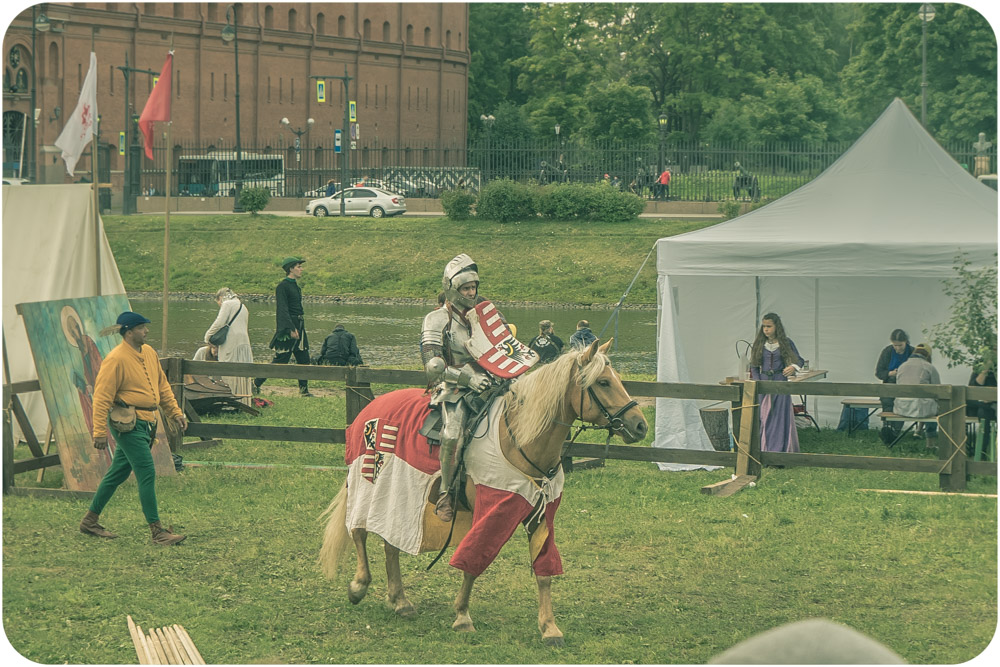 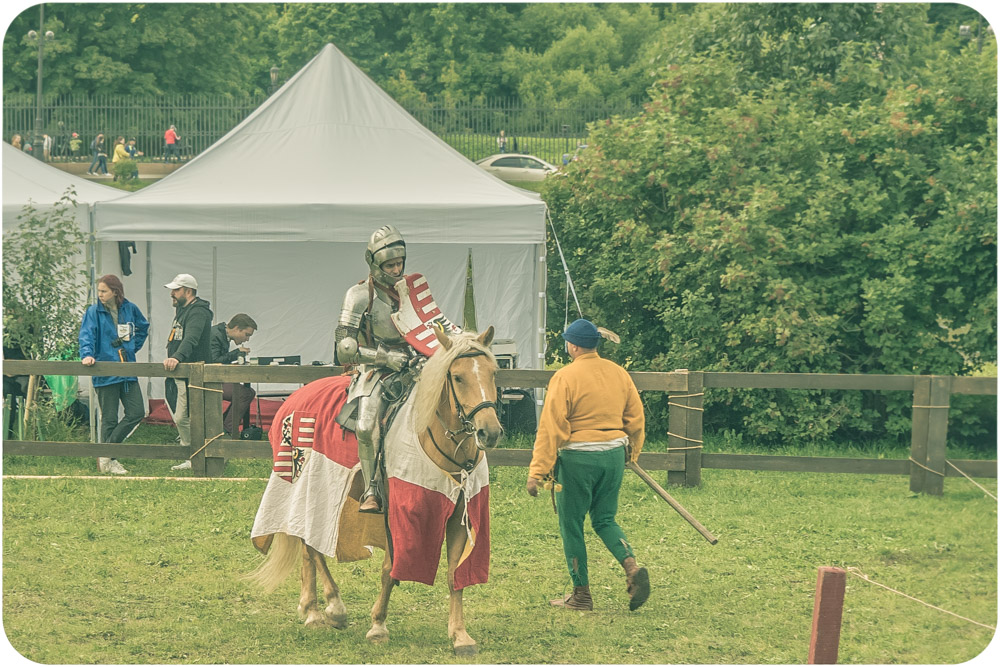 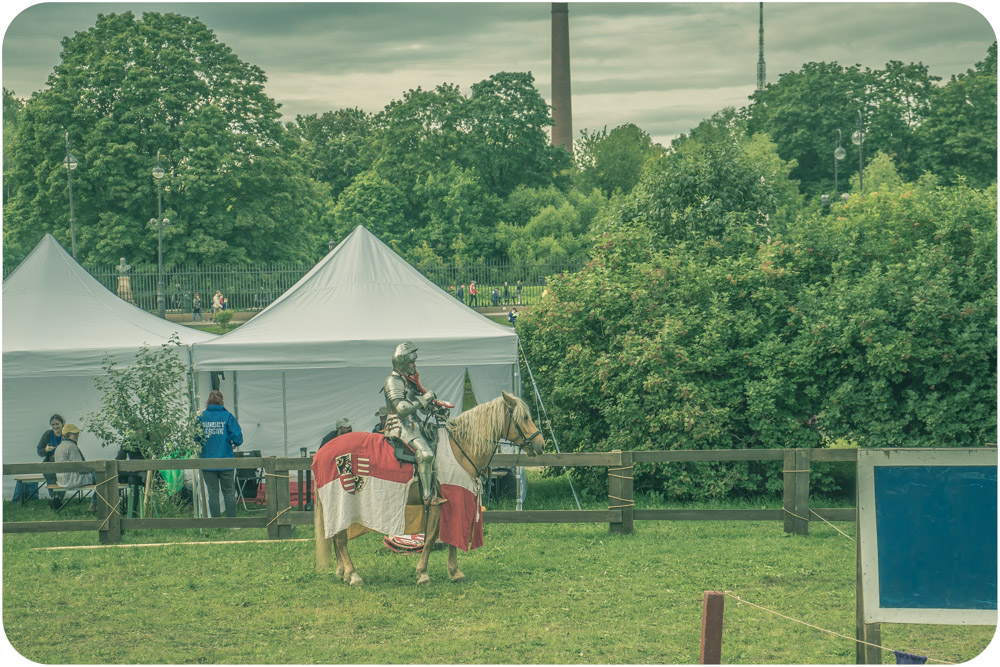 Yes, this is a continuation of a report from one event organized by the so-called reenactors. These are enthusiastic and one might say, a little crazy people. They spend a lot of money and a lot of time on their hobby. For some, it even becomes a matter of life. But thanks to these madmen, we can briefly and shallowly dive into the times they represent to us. It's like theater and thanks to these people. 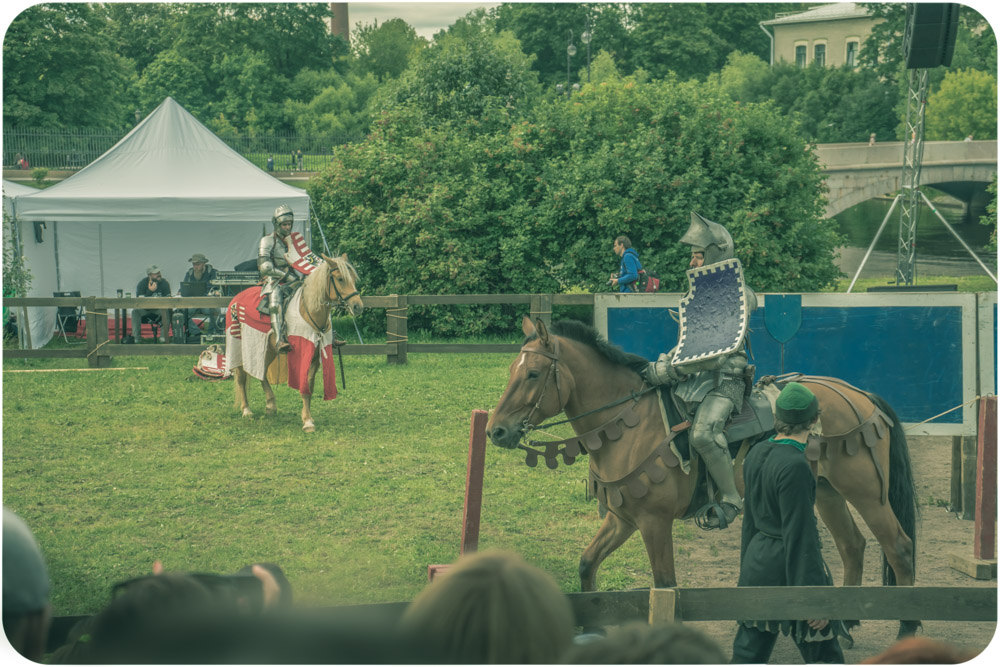 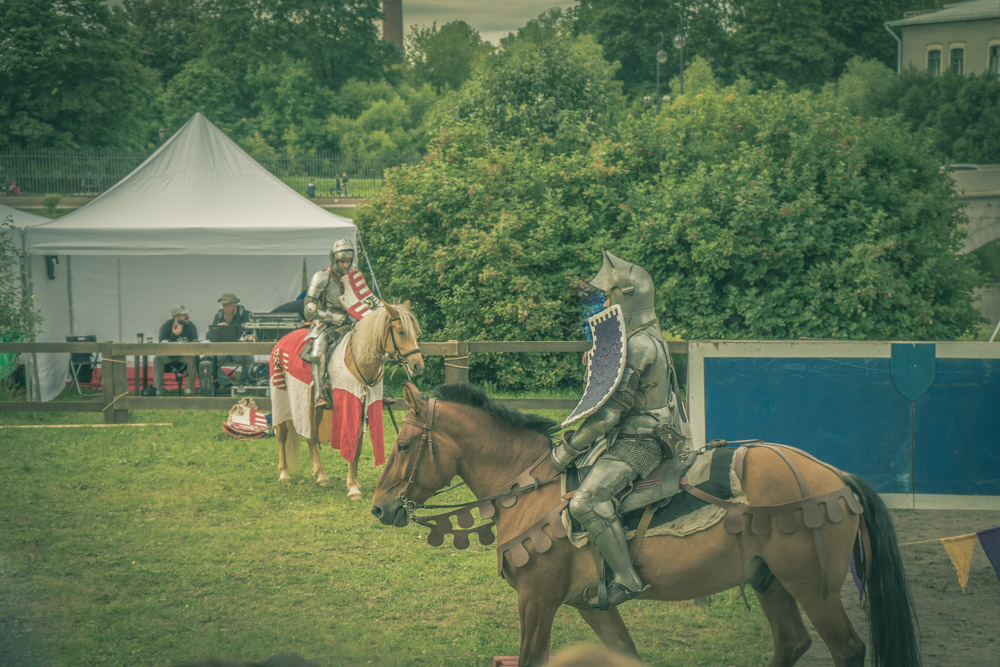 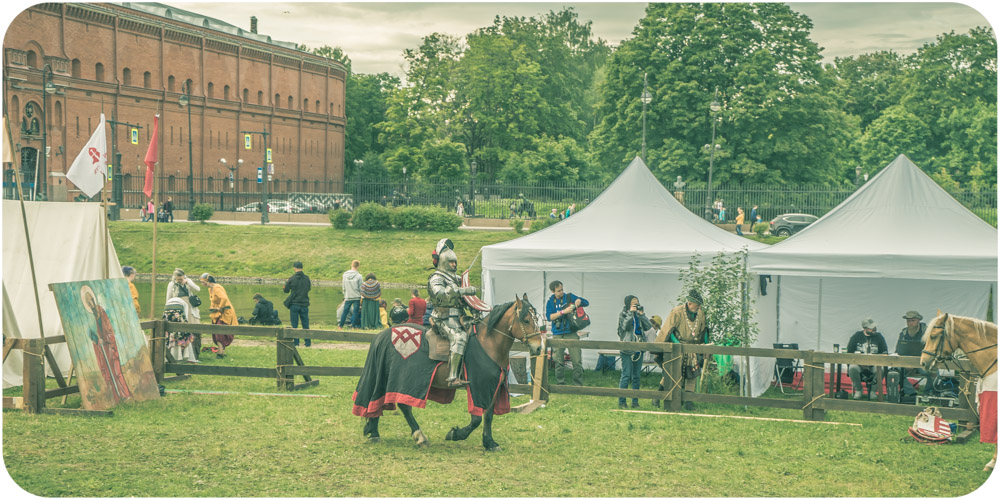 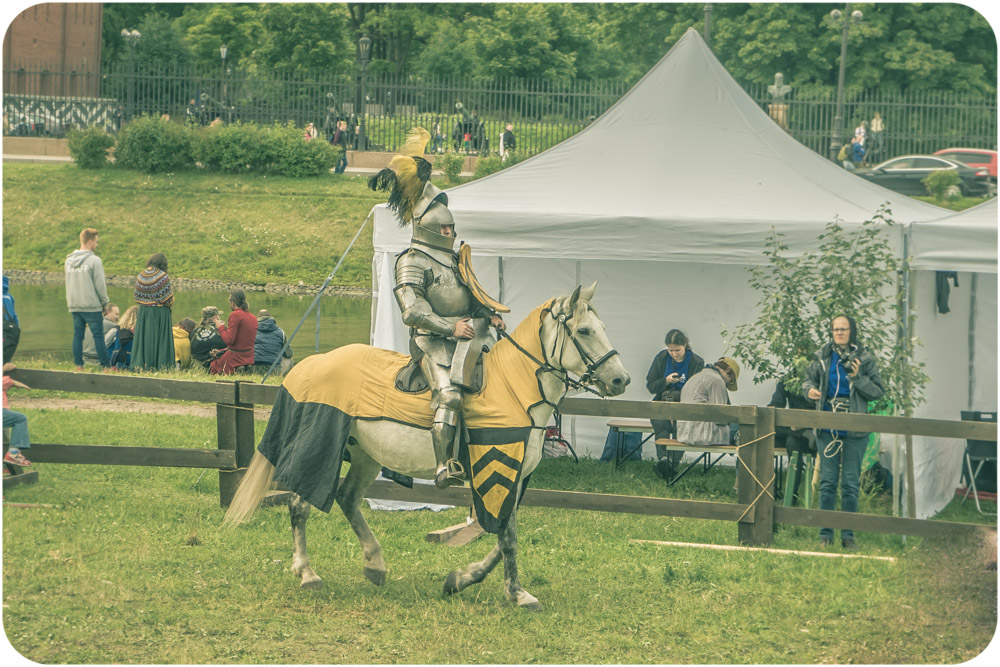 They came here from many countries of the world. They are united by a common cause, a common passion. In addition to simply restoring past life scenes, objects, clothes, crafts, they arrange real fights. It's close to sports. These knights in steel armor (on the street about + 20C) sitting on horseback, after a while will gallop towards each other with wooden spears at the ready. 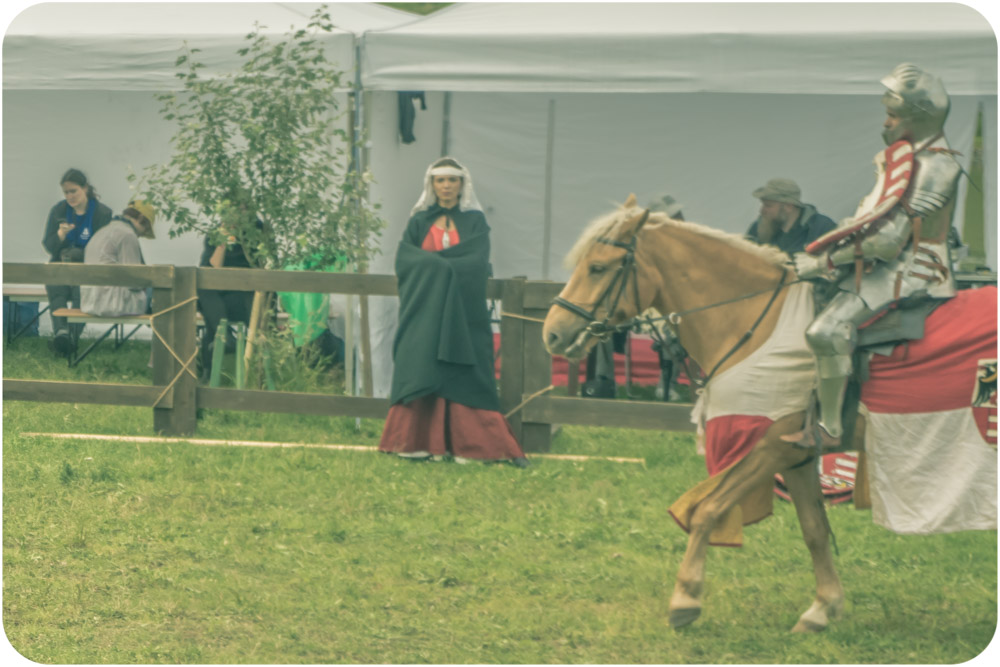 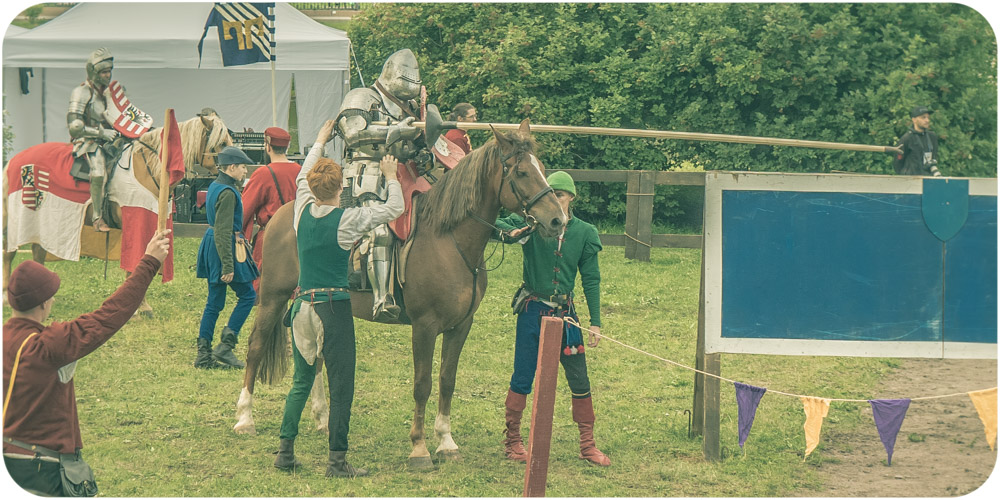 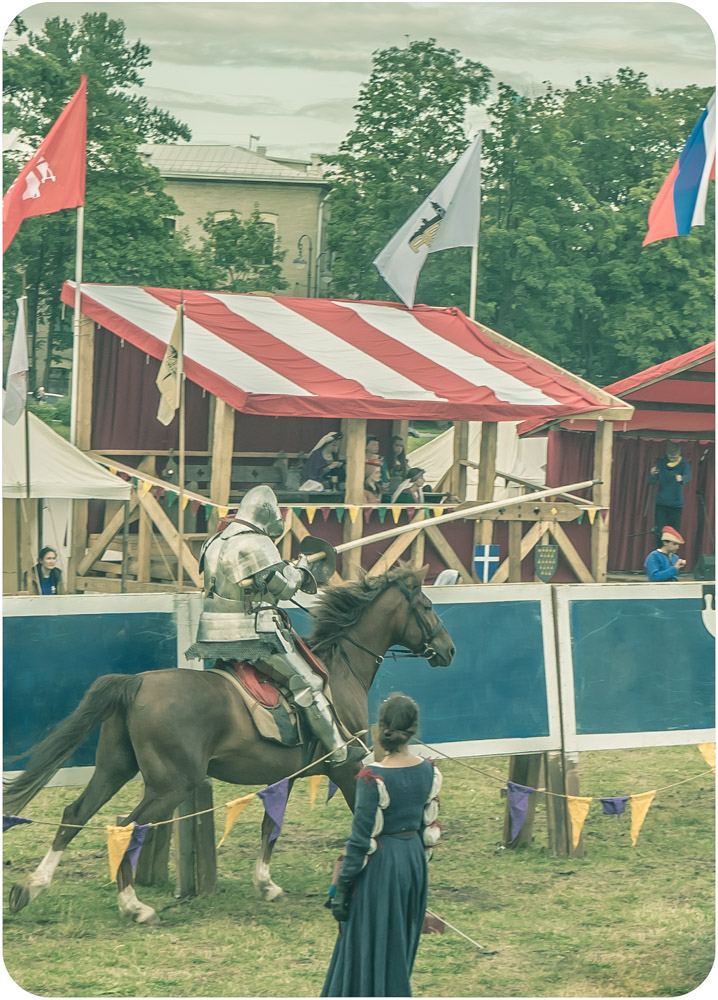 Between them there will be a blank wooden fence for security. Its height does not allow hitting the horse's body with a spear (possibly only in the head by negligence).
But at the same time, the task of each is to knock the enemy out of the saddle or break his spear from a blow to the enemy’s body. I saw them break several copies. Despite the armor, this is a pretty strong blow. 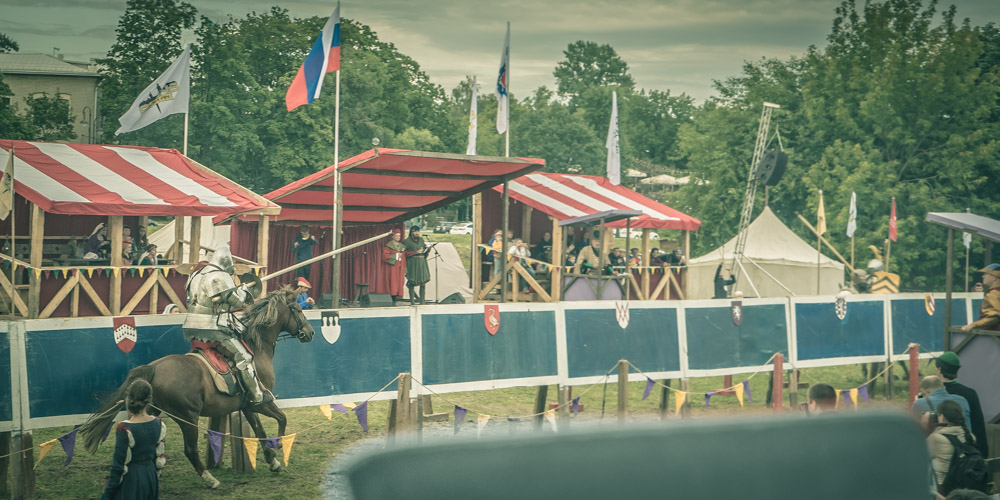 There were a lot of spectators and I was standing in a very uncomfortable location for filming the fight itself. I watched the preparations well, but not the fight itself. In this photo, you can see two approaching knights at once. The second one is far to the right. 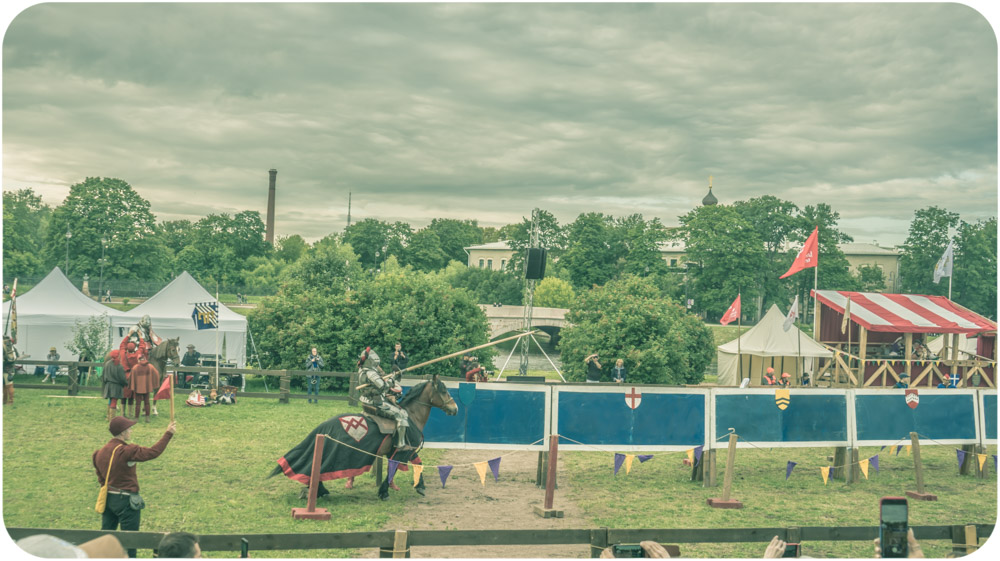 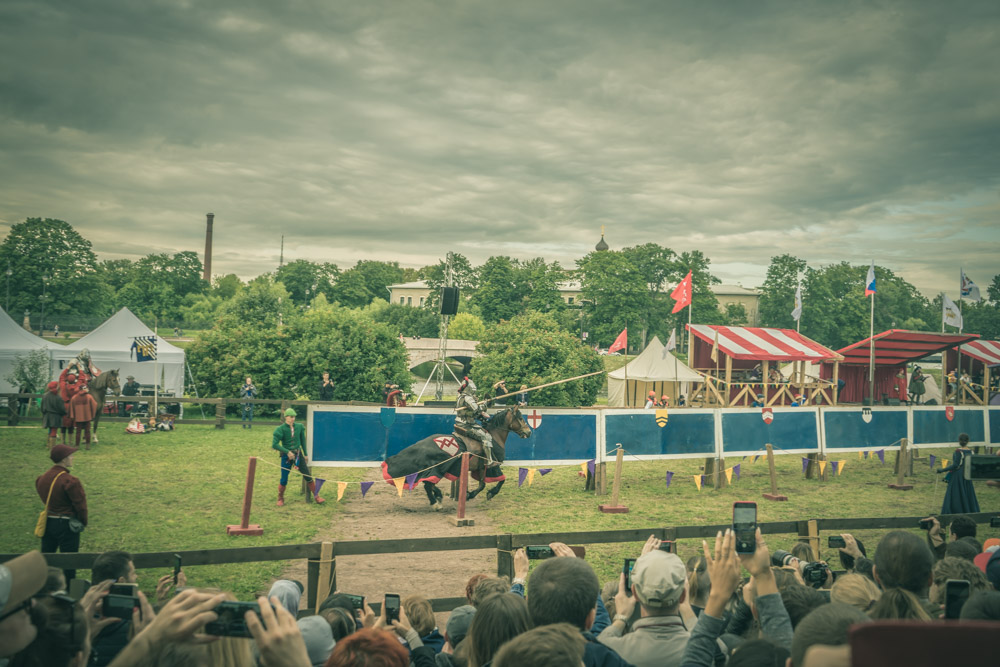 That's how beautifully they start ... 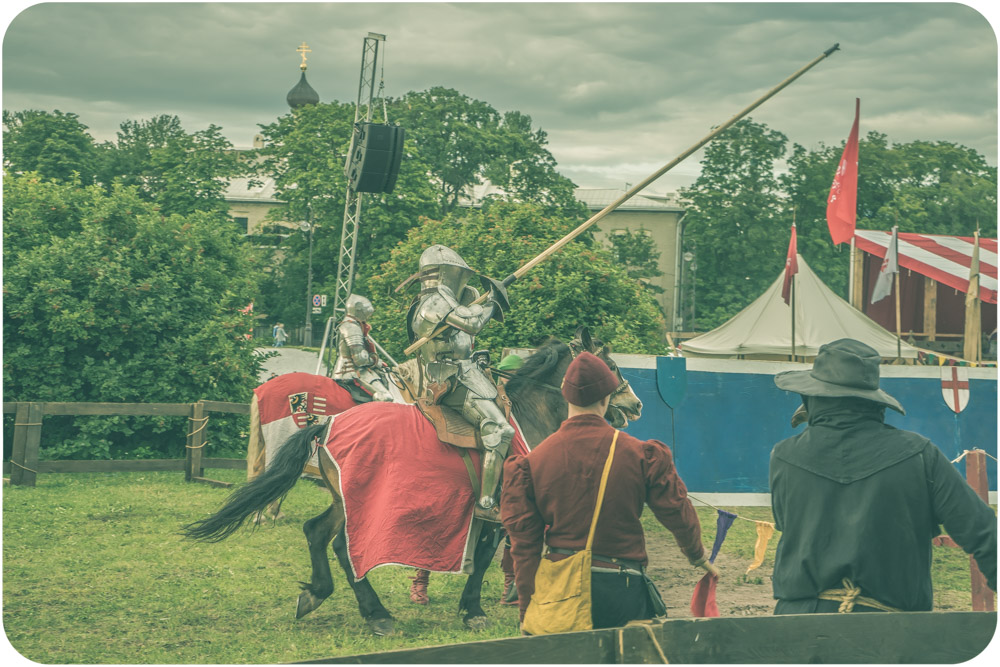 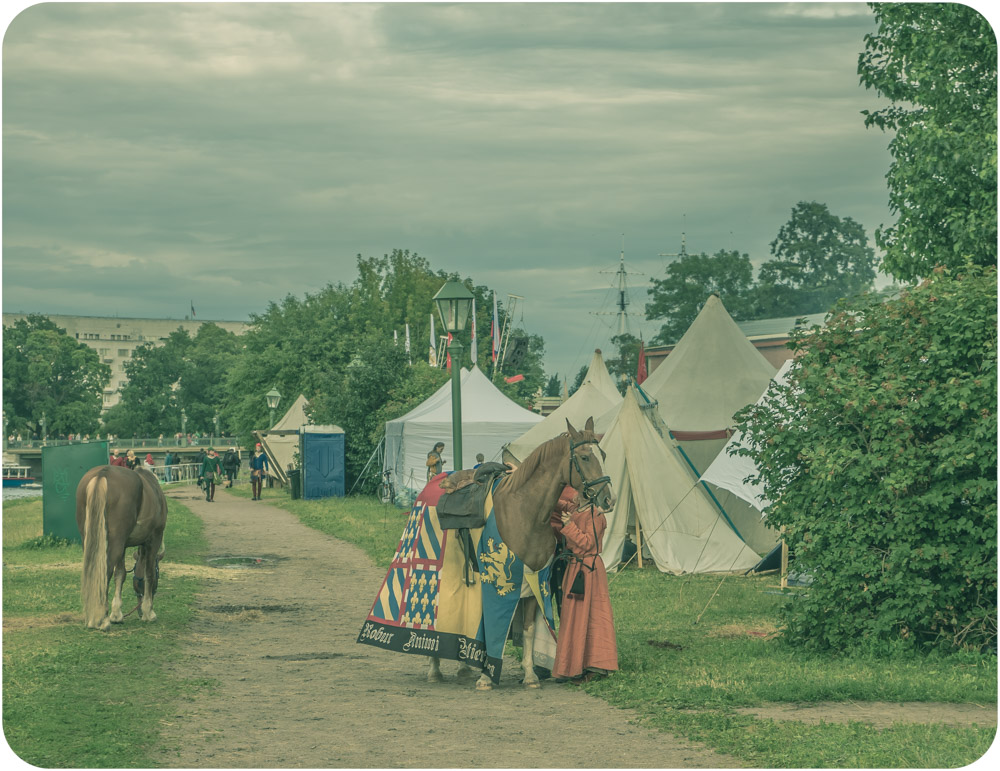 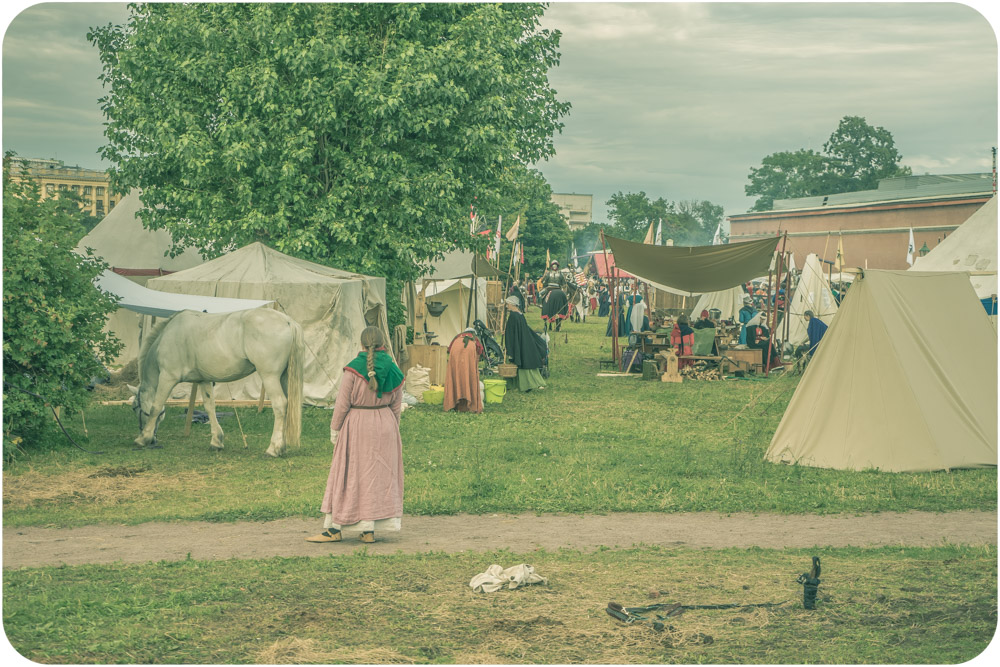 And this is their camp. Even here they managed to bring in the spirit of the Middle Ages, although the canvas tents are quite modern.

And now some brighter pictures. Yes, there were also fights between knights on foot with swords. And I didn't have a good location to shoot either. But something was captured. 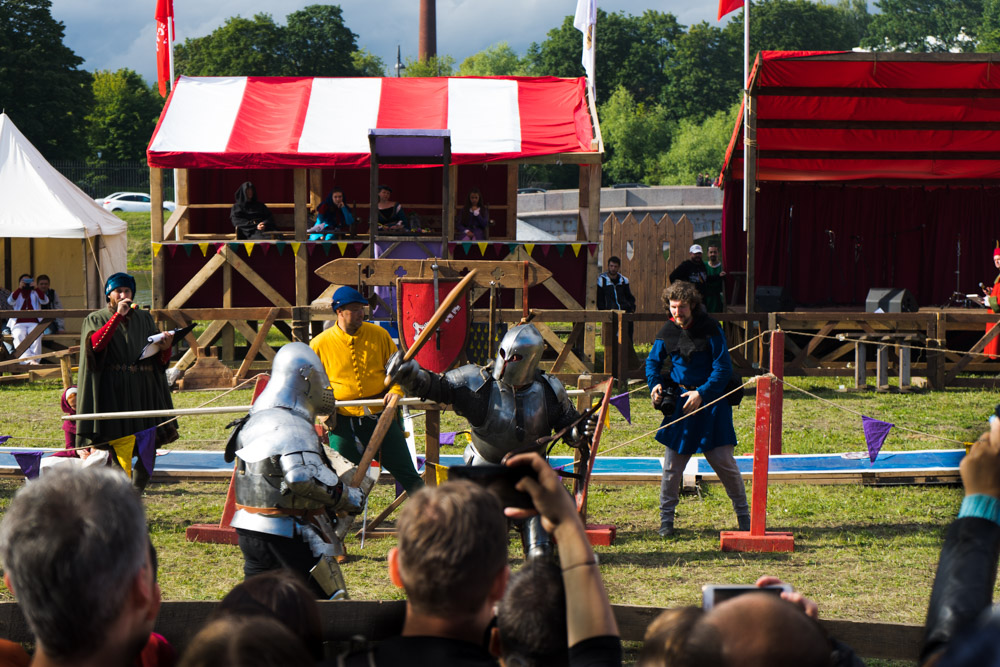 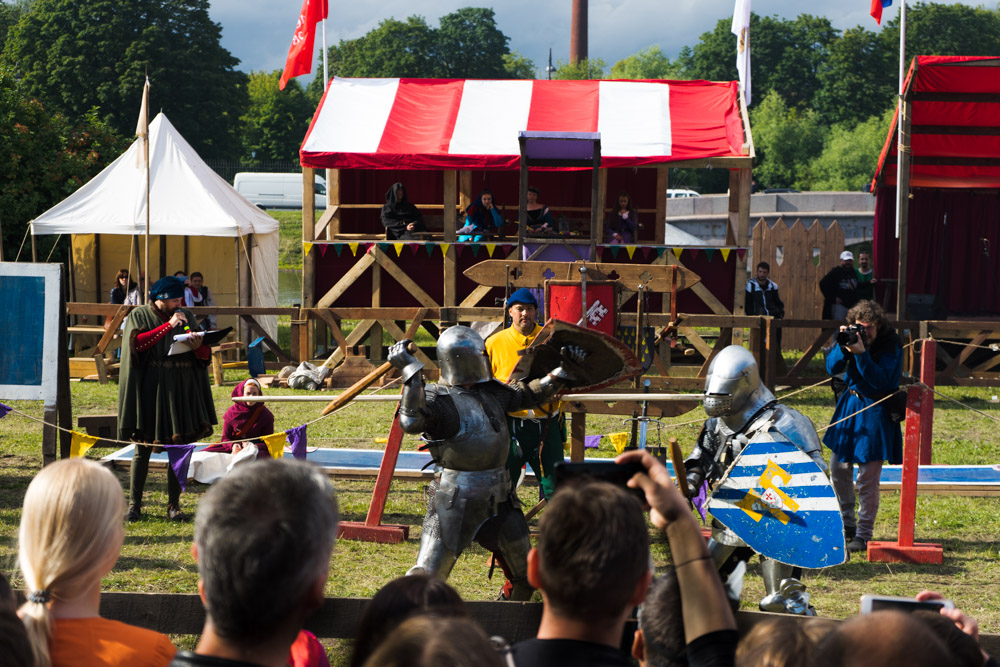 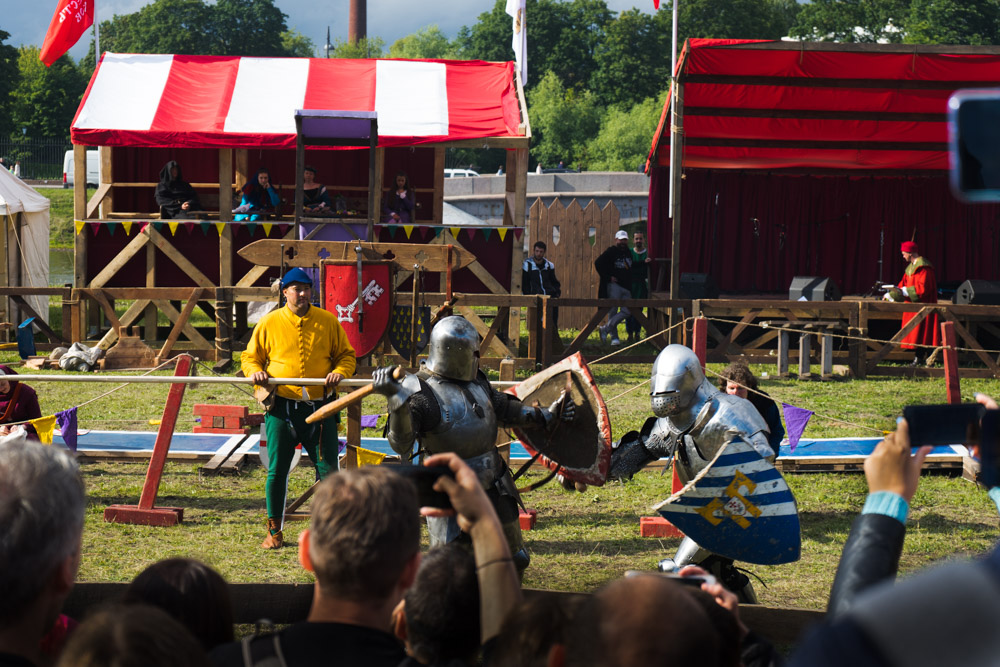 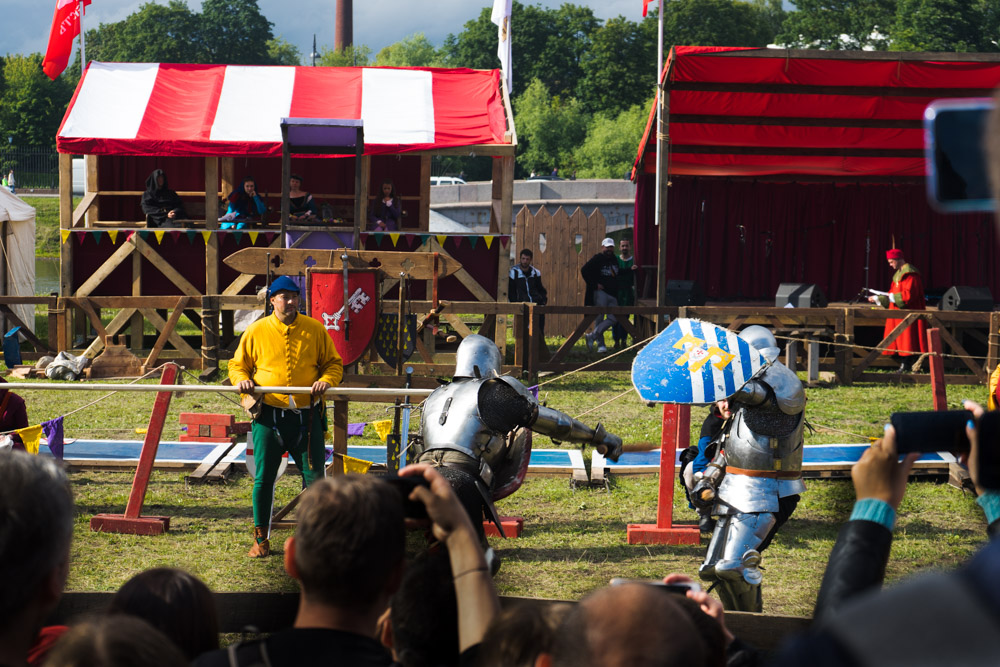 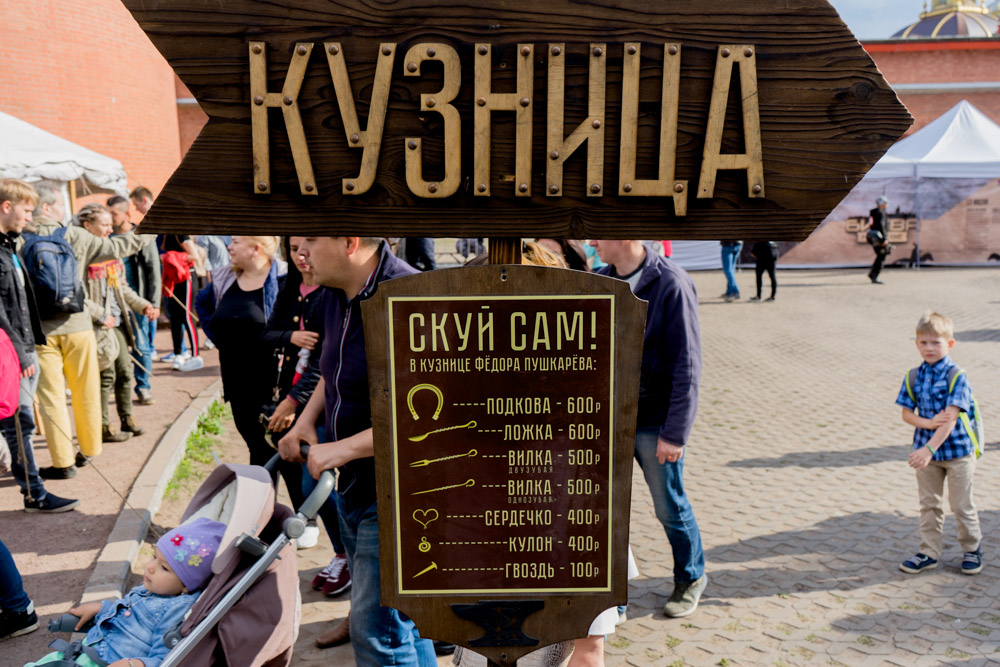 Unless otherwise specified, text and photos are copyright

From Russia with Love

Yay! 🤗
Your content has been boosted with Ecency Points, by @bambuka.
Use Ecency daily to boost your growth on platform!

Yes! It is bad NOT to dream. This was such a wonderful post @bambuka! Very original and unique. I love the history. An unusual trip to #MarketFriday

Glad you liked it))
Glad to see you @buckaroobaby and thank you for your kind words!
!invest_vote

I have ALWAYS wanted to go to a medieval fair like that, LARPing it is called over here.

I would make a gorgeous busty maiden! 🤣

One day I might, but in the meantime, thanks for taking me back in time to yours! 😃

It would be interesting to meet you at a fair like this and wear a medieval dress🤣 😂😅
Cheers and !BEER
!invest_vote

Hey @chocolatescorpi, here is a little bit of BEER from @bambuka for you. Enjoy it!