This Week In Hive Nov 27th CUB, SPLEX and Goals 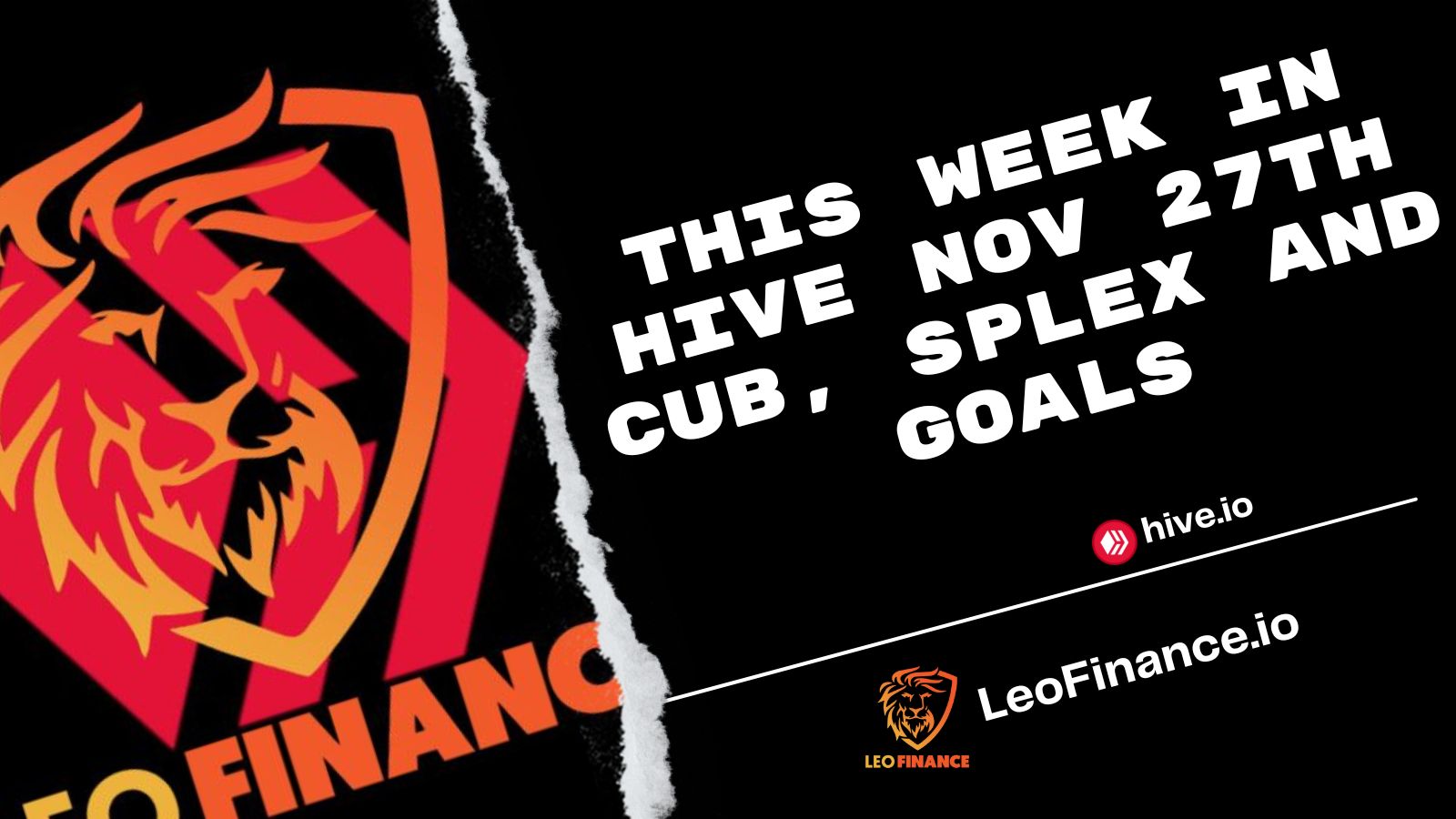 This Week In Hive Nov 27th

This week might not seem busy but I've run into a few cool things which I recently started to use and test out that I'd like to go over. Besides that most of the changes on hive have been very small but let's go over some of those highlights.

CUBDeFi got a update to the CUB kingdoms which now looks more like Pancake swaps locked pool. Now you can take your CUB tokens and either keep them in flexible APR which means they are liquid and can be pulled out at any time or lock them in for up to 52 weeks. The longer the lock the higher the APR. The reason for this is it shows those who believe in the long term of the platform to be more rewarded by locking their CUB for a longer period of time.

Splex.gg While this isn't new it's something I just recently started to use myself. Splex offers the ability to automate your rentals on Splinterlands It's main goal is to optimize your rentals so you're always getting close to the best price for your cards at any given time. I've tried to do this manually in the past but the huge time sink and trying to list and relist rentals is far too much. Splex simplifies this on a epic scale. I put this on a second account which has cards I want to rent and I'll update you all next week on how that's looking. Right now I'm expected around 25,000 DEC per day if not better through estimates and I'm curious how close it is to that estimate. That should put me at around $750 in passive income and yes there is a fee involved for using their platform which I'm also curious to see what happens with that and will keep you all updated.

My hive per day fell as I didn't buy as much Hive this week. This week it was a total of 65.71 Hive per day of which a good portion of that was from buying hive and then powering it up. Hives price has climbed a bit this week now holding around $0.35 - $0.37 which is decent for the bear market we are in at the moment. 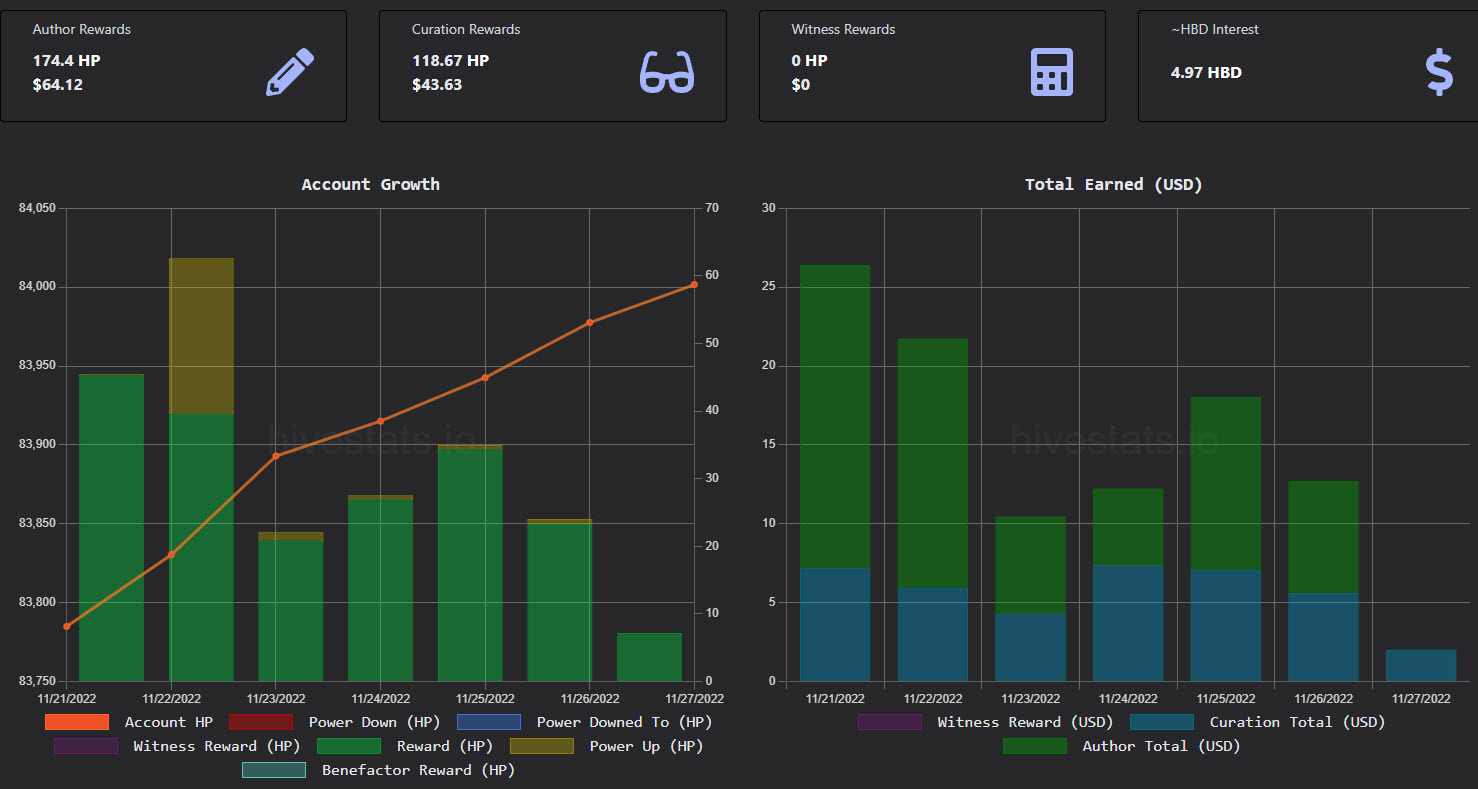 Dollar wise hive has been slow in terms of earnings. With an average of about $12 a day from curation, posting, comments, portion and interaction. I can see this discouraging a lot of people and perhaps we see a down tick in activity. However that might be a good thing as many of those mindset people would have been looking only to cash out of hive instead of powering up and supporting the ecosystem. It could also be why we have been seeing a uptick in the price of Hive as a majority of the people still using it are those who are powering it up. HBD wise however is hard to come by. On most days I earn $5 or less in HBD which is extremely hard to get my hands on for being able to either place it in savings or CUBs Farms.

Overall the LEO stack has grown by a large amount including a massive 20k delegation now for both working for LEOFinance and also taking part in the Slay the Dragon event in which I powered up over 5k LEO on the last LPUD (LEO Power Up Day) That's pushed me well beyond my goal but my goal is still about 3k shy of what I want in terms of my own stake that is not reliant on a delegation.

LEO for me is one of the projects I'm heavily investing in at the moment and that's because I'm curious on two major events which should be taking place soon. The UI update that should hopefully allow us to have much more activity on the platform including onboarding more people. The Second is the smart contract going into effect that uses ad revenue earned to buy LEO and give it to those who have LEO powered up. To me these two things paint a rather bullish LEO in the short term at least.

The overall feeling on Splinterlands has been a new negative group that seems to just be taking cheap shots at the devs and games. Or perhaps it was always there and I'm just noticing it now. It legit makes no sense to me as the recent moves and downsizing they did are actully GOOD for the game and not bad plus everything is still in line in terms of being released. In fact this week we should finally see the non card market and that could make some serious profits for the company.

My hopes are the non card market has a small fee and that small fee gets split between the company and some of that fee goes back into the game through value of SPS. If that's not the case It's going to be something I'll be pushing for in a proposal.

Overall I am still very bullish for the game and it's value. We have land coming up soon which is going to create a huge amount of new transactions and bring some new use cases to the game.

So many activities going on in Hive everyday and every week. The coming week and weeks will be thundersome.

Honestly, I earnestly wait for the New Leofinance UI to be implemented. That will be a huge win to the Leofinance Community and hive ecosystem.

There is more to gain by investing in Leo, especially now that the price is relatively low. I wonder what it happens when LEO becomes $1 or $5 😁. Not only that, the benefits involved in staking LEO should also make one think Long term.

Yea, as the value of Hive us low, it also affects how well we gain from our content. And this is one of the reasons why people leave and why activities are low on the chain.

Those who are left believe in the Ecosystem and want the system to grow, whether during the bear or bull season.

I got 50 dec from yesterday :p

Inspiring goals and nice to see some tools presented that all involved in Hive should know about.

Great goals. I love goals a lot as they give you something to live for and work. You have actually come a long way on these goals - and actually surpassed some - LEO. The bear market seems to be the best time to buy and build. I just discovered LEO less than 2 weeks ago and purchased 5k. Am seriously planning to be a lion by the next LPUD

LEO for me is one of the projects I'm heavily investing in at the moment and that's because I'm curious on two major events which should be taking place soon.

Yes, you are right dear. I had my own goals from the beginning, but I still believe that I can achieve that before the year runs out.
Thanks very much.

you must have quit the deck , my cards i cant pay some one to rent