Before I set the timer for 5 minutes, I had to line up a few eggs in a basket, e.g. define "muffler" with an ear toward car exhaust rather than eye toward those long scarves that, wrapped around a face on a cold winter day, might muffle one's voice. 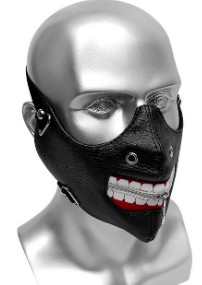 Muffler: a device that decreases the amplitude of electronic, mechanical, acoustical, or aerodynamic oscillations.
Muffler: a wrap or scarf worn around the neck and face for warmth.

Is there a voice you'd like to muffle--or silence?
A coworker, a neighbor, a parent, a sibling, an in-law...
A million self-help books tell us to walk away, ignore, let it go; more recently, the Q-TIP method is recommended. "Quit Taking It Personally."

And that's easy, if you don't have to see the person for holidays, or five days a week at the office.

This Person.
This voice I never want to hear again.
The voice got planted in his wife, and his wife now parrots the idiotic, inflammatory, insulting things he dares to say to fellow members of the human race.

For example, this Loud Mouth (what a euphemism) has a long history of spouting off, verbally eviscerating whoever might offend him, and alienating people. His wife is in awe of his machismo. Even after it comes back to bite them, she defends his verbal tirades. I consider it verbal violence.

The level of his insults is so childish and profane, he really has no impact, but he is too immature and emotionally stupid to see that.

FIVE MINUTES ARE UP

So I will say very little else, except that this guy's verbal tirades have cost him, dearly, in terms of reputation and employment, but he keeps enough people bamboozled, his ego remains intact. Which is to say, inflated, like a hot air balloon drifting overhead, casting a shadow on the ground below, making dragon-breath noises that set off the barking dogs. (His income goes up and down.)

I'm going to share one example of how his thinking has permeated his wife's brain. The woman actually texted someone this message (names redacted). She claims that White Man (unnamed) is timid, lacking in confidence around women (boy does she ever not know this guy), and likely to feel depressed if he were to be verbally stabbed by the narcissist who needs a muffler (or a brain).

Or do you think this woman sounds....
Nope, not gonna use that word.

The white man she describes as a door mat is in fact a proponent of the Dale Carnegie approach to conflict.

Dale Carnegie was an American writer and lecturer, and the developer of courses in self-improvement, salesmanship, corporate training, public speaking, and interpersonal skills. Born into poverty on a farm in Missouri, he was the author of How to Win Friends and Influence People, a bestseller that remains popular today.

Sinclair Lewis described Carnegie's method as teaching people to "smile and bob and pretend to be interested in other people's hobbies precisely so that you may screw things out of them." However, How to Win Friends and Influence People became a best seller in the late 1930s and continues to sell well today.

In a muffled voice I might venture to say, Maybe it's only popular among white people? Or the much-maligned "oreo" (white inside, black outside)?

I could go on, but this White Man she demeans is actually one of the coolest, calmest, most Buddha-like Millennials I have ever known.

To develop a thick skin, to set boundaries, to tolerate no disrespect,

to teach one's children not to be "door mats" - we can agree on that.

Recently, my lifelong commitment to unconditional love and forgiveness has been put to the greatest test yet, so I am ever mindful of @owasco's timely and relevant words of wisdom, thanks to her son. (Hyperlinked for your convenience):

I remember what he said, and I let Niko guide me even still:

.... Strife uncovers paths you could not see before your struggles began. Do not follow ANY guidance that does not feel right to you, especially if your ethical boundaries have to be crossed.

I prefer to treat people with kindness, respect, the benefit of the doubt, or if you will a "muffled" statement of disapproval and boundary setting. To verbally eviscerate anyone is not going to win me over, inspire respect, or build a reputation for people skills.

#ThankYou @mariannewest for the prompt!

Mufflers
Avoid the headache caused by a faulty muffler. Get your vehicle back on the road in no time by shopping for an exhaust muffler here at CarParts.com.

A human sound muffler and indicator for placement around the mouth of a user to absorb most of the sound emanating from the user's mouth including a microphone and associated electrical circuit for receiving unabsorbed sound and providing an indication of the intensity of the unabsorbed sound. ... Sound muffler for covering the mouth @article ...

May you never hear his voice again. Although we must be careful what we wish for...

The woman's ethical compass has been disabled, is pointing only in one direction, his.

So well said, Stacey, all of it!
Her ethical compass disabled - pointing only in one direction, his.
I hear a poem in there!
If only switching out a sister-in-law were as easy as switching out a muffler.
You have such a flair with words. :)
Thank you!

May you never hear his voice again

Men and women of all colors can be "doormats", "pigs", overconfident, or have no confidence at all. I do not believe it has anything to do with the color of your skin and to some point it has nothing to do with how you were raised, some people are just asses, plain and simple. I know Preacher's children who turned out to be terrible adults and druggies' children who turned out to be the best kind of person.

Bless you. Yes. Yes! Ethnicity, culture, religion, parenting - to some point it has nothing to do with how you were raised -
It's one thing to raise a child to be tough and assertive. Or to indoctrinate a kid with "turn the other cheek" and unconditional love and forgiveness (aka, floor mat). It's still another thing to send into the world our adult chidren as well-adjusted, kind, hardworking, productive citizens with a sense of decency and fair play.
One thing my kids never saw me model: sass and rudeness to my parents/elders or pretty much anyone.
I did model floor mat.
Still working on that one! Niko and BOUNDARIES.... set boundaries without slamming doors and excising a person like a cancer from your life....