In today's edition of YIYL, (You Invest, You Lose) we had back to the centralised crypto space where everything seems to be blowing up. The current state of the market makes the Celsius 3 billion dollars whole look like an appetiser and it seems FTX's quick rise to the top was not without its weeds getting stuck deep into the industry.

Clearly, a lot of centralised exchanges did business with FTX, had assets on FTX, or had lines of credit with them. The obvious ones were Voyager and BlockFi who was first to call it quits once big daddy FTX wasn't able to bail them out.

Now we're seeing a host of other names, also putting their clients into forced hodl mode with no ability to issue a claim on their IOU's. So here's the thing when you have bitcoin on an exchange, you don't have bitcoin you have the promise to pay bitcoin in the future.

If you don't claim the promise, exchanges feel you're never going to do it, so they fuck around and hope you never find out. Now you're freaked out over some or other blow up you go to claim your bitcoin but because they fucked around, there isn't enough for everyone's claims and someone has to eat those losses.

So who are these companies who fucked around and are now finding out, leverage isn't to be fucked with in bitcoin? 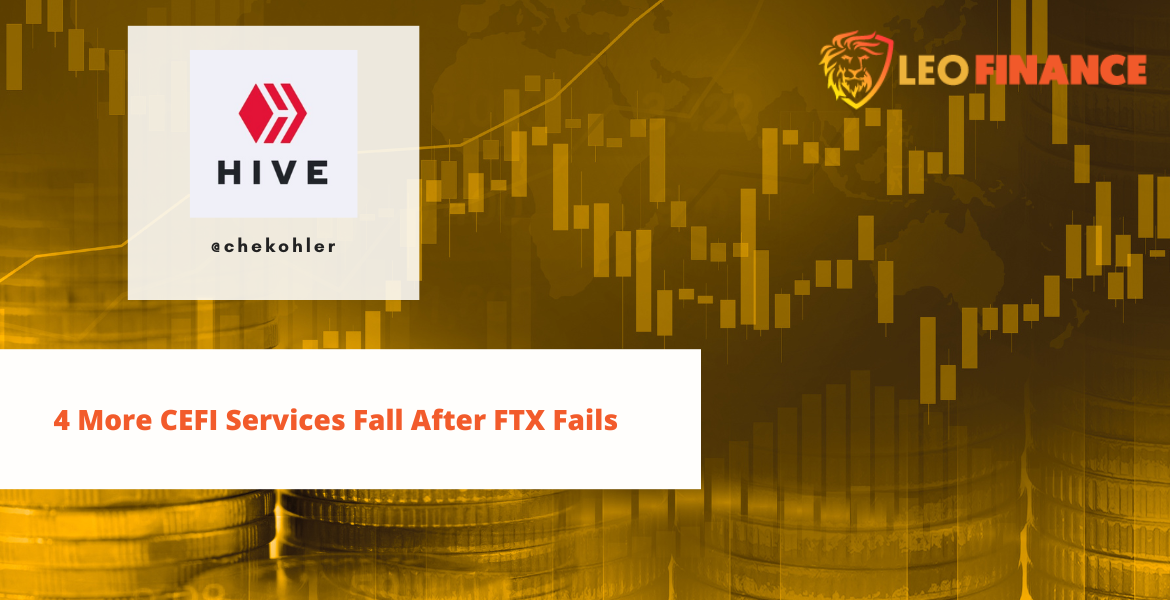 Crypto lending platform Genesis Global Trading might not be a name you know, but it's a service that many exchanges plug into to offer bitcoin and shitcoin yield products, they're the backend of where the funds go when you're getting the return. Anyway, they announced they would be halting withdrawals in the wake of the "extreme market dislocation and loss of industry confidence caused by the FTX implosion".

They urged in their announcement that the decision would not impact their trading or custody businesses—though if I was a user of their other services I might not be feeling so reassured given crypto companies' poor track record of segregating operations.

Genesis has about $2.8 billion in total active loans as of the end of September 2022. The firm also had to eat the losses of hundreds of millions due to exposure to the Three Arrows Capital collapse, and in August announced layoffs of 20% of their employees, so it's really not been a good time for them.

As I mentioned Genesis called it quits and so products built on top of it would naturally have to do the same. The Gemini shitcoin platform announced that they would be pausing withdrawals on their lending platform or Gemini Earn.

While you can still degen on the exchange your earn products, are pretty much fucked. The company said in a blog post that they were "working with the Genesis team" to restore withdrawal and that they will not be affected, but so many other services said that too before they shit the bed royally.

Unknown to most of us, because I've never fucking heard of this service, but a Brisbane-based cryptocurrency exchange Digital Surge announced that they would be suspending deposits and withdrawals.

"Due to the impact of FTX Australia's administration, we are not able to operate business as usual and have suspended all deposits and withdrawals until further notice," they wrote. They also disclosed in an email that they had "some limited exposure to FTX".

Nestcoin, a Nigerian startup that both builds and invests products they hope will "democratis[e] access to economic opportunity for everyday people in frontier markets", has announced that they fucked up big time and have to deal with a massive cut in their runway, losing access to 4 million bucks. As a result, they will lay off more than 50% of their nearly 100 employees.

The remaining employees will see their pay slashed by 40%, and the company CEO plans to take no compensation at all. Nestcoin had nearly all of the funds remaining from their $6.45 million funding round locked in FTX. So approximately $4 million, is probably gone for good and they're going to have to deal with that drama.

Not the last to bite the dust

These are just a few of them that have fallen so far, there are a couple of others I've yet to mention because I don't have 100% confirmation yet but I will be sharing them here once they admit defeat. The contagion is rampant and it's taking out these leveraged companies and companies with too much exposure like a virus on a mission.

I can't help but enjoy the drama, knowing I don't have a pony in this race, and knowing that I warned all the people that I possibly could and was happy to see them getting rekt.

Its nature at work, SBF and the rest of the clown car are driving the price of bitcoin down and I couldn't be happier to pick it up and these low prices. If we get another leg down I will double down even more, because this probably won't last forever and my stacking goals are within my reach.

Goals I never thought I could get to when the price was in the 50s and 60s.

You've forgot about Liquid Global exchange, they had been bought by FTX recently... And now they went belly up.

Thanks for the heads up, I didn't hear about that one, probably because there is so much drama already but I will have a look into it