In today's edition of YIYL, (You Invest, You Lose) we learn a valuable lesson in the use of leverage. For some reason, people think that because DEFI uses tokens that are overcollateralized that it's still okay to degen and that risks are mitigated. When the fact is you're using assets that are highly volatile, your agreements are in an asset you can't print, aka dollar value and you're not using that leverage for productivity, just trying to capture capital flows.

So what could go wrong? Well, a mass deleveraging that's, what, one that has taken some of the biggest names in the space down, and there are a few lesser-known names to follow. 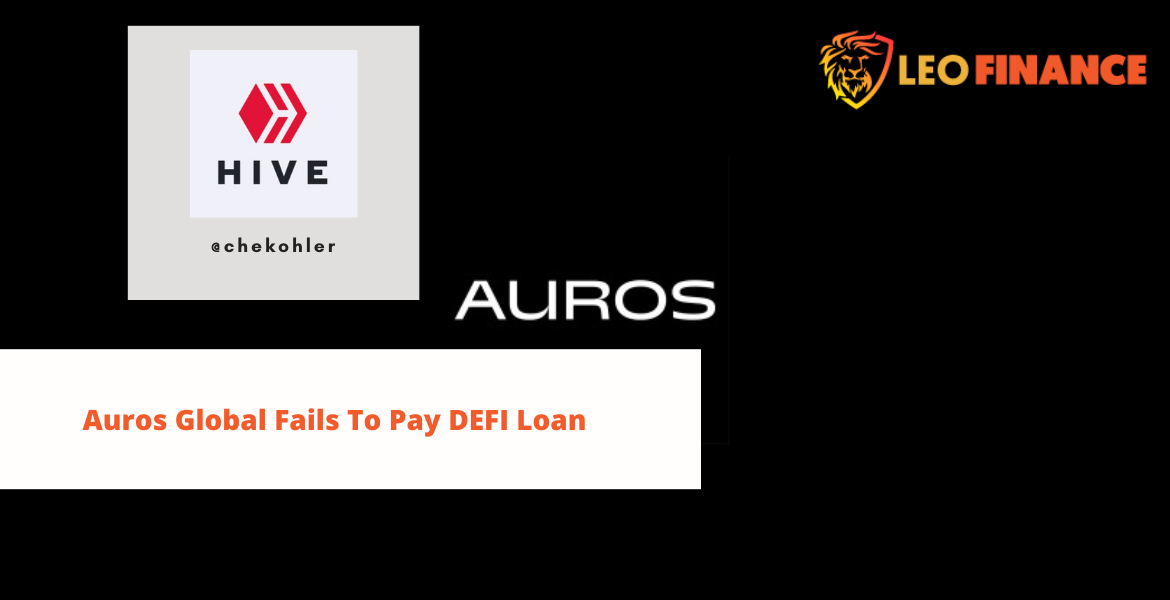 This week news broke that crypto trading firm Auros missed a payment on its 2,400 wETH (~$3 million) loan from the Maple defi lending project. This happens all the time in DEFI, normally with smaller traders, but it doesn't mean institutions and dapp builders are also not taking out risky loans they will never be able to service.

I don't think people realise how many coins are leveraged off the back of loans and what a shell game is being played as they trade the float of something that has very little backing, but back to the story.

According to M11 Credit, the operator of the credit pool from which Auros has taken the loan, this was due to "a short-term liquidity issue as a result of the FTX insolvency".

The debts don't stop there

Both loans reach the maximum, meaning the borrower has to pay an unusually high-interest rate (around 23% annualized percentage rate at press time) for the loans.

In total, Auros has 8,400 wETH (~$10.7 million) and $7.5 million in USDC in loans from M11 credit pools, plus another $2.4 million in loans from the Clearpool defi lending project, for a total of more than $20 million in unsecured loans.

Credora, a crypto credit rating firm that works with Clearpool, downgraded Auros’ creditworthiness to grade C (with AA being the best grade). Now as we know ratings don't really matter and it's all tied to a wallet which I could spin up a new tumble the funds and go again, but hey you believe in those arbitrary metrics.

What I don't yet understand about this whole drama is that according to reports these loans are unsecured, meaning that the borrower did not pledge any assets against the loans and secured them with their allegedly good financial standing and trust that it would pay back.

How does one borrow on the basis of trust if you're going to borrow from a DEFI platform? Unless those DEFI platforms are not in fact decentralised and that agreement were struck up directly with the parties based on trust alone.

That sort of defeats the purpose of DEFI right, it's meant to be transparent and to have collateral right? Am I missing something?

If Auros cannot find a way out of its liquidity crunch, these loans are at risk of default, leaving the already embattled lending platforms with bad debt and threatening creditors with losses.

Dumped on a pile with the rest

Auros joins other digital-asset firms, including BlockFi and Genesis Global Capital, that face financial difficulties as contagion spreads across the crypto industry. While Auros seems like a small fry it just shows that we have yet to see where all the failures are hiding in this system.

Personally I think we've seen the worst of it, but we haven't seen the end of it, I think Celsius, FTX and Genesis are the big fails, but there should be plenty of relatively smaller failures coming to light as liquidity continues to dry up in shitcoin land.

You are right to question the verbage used by these companies trying to explain their way out of their financial mess. A lot of these companies were started by people who just heard about crypto a few months prior and saw that pixelated apes were supposedly worth millions. Now this FTX deal ends up being a convenient out for a lot of company leaders who got REKT.

Its all arse covering time, these guys thought they were smart and mistakenly thought going leveraged long would work out forever and thought a bull run plus leverage makes for a good business and got rekt like retail did in previous years, remember when people did that on bybit and bitmex in 2017 saw many people posting massive paper profits thinking they were going to retire and then getting their faces ripped off

I agree, that is why I personally try to spread my risk out. I have utilized the money markets in DeFi but I didn't play it out into Triple overtime like a lot of these big money n00bs. Trying to source huge bags at this point in the market is tough though. Right when it makes sense for big money to allocate to guys in the know.

This bear market has been brutal as usual. When bitcoin missed the expected $100k target and rolled over, many investors got dumped by the crashing wave, and those who took loans or used leverage were the worst off it seems. They can't wait and hodl for the next wave.

Lol in nominal value yes its been the biggest down turn, in percentage it hasn't been as deep as previous bear markets, and yes you're right the 100k meme was pretty strong and a lot of people fell for it as if it was law, and with that retail and institutions fell for the stock 2 flow model and allowed leverage and ponzis to proliferate during that time because it would be backed by the run-up to 100k and well that didin't work out and nature is healing as it should with no one coming to save you