Celebs Getting Sued For FTX Shilling

In today edition of YIYL (You Invest, You Lose) I am slowly starting to creep into the world of the FTX collapse, 😀 so I am sure many of you have been waiting for me to touch on it, but this won't be the meat and bones, but merely an appetizer of what is the Enron of the shitcoin market.

Onecoin, Luna, Celsius, Bitconnect, and now FTX, same shit different branding, but the difference with FTX versus the others I mentioned is how big it got and how it suckered so many people in, from celebs to politicians, investment firms, pension funds, and other companies. A lot of people got their hands dirty with FTX because they were willing to whore themselves out for money.

So many people hoped on the SPF altruistic scammer train and now they're sitting with egg on their faces and it's wonderful. I hope not a single person involved in the shilling of this garbage gets off.

I hope that they lost money in FTX and continue to lose money as the fall out of this case continues. As is the case with these class action law suits now spinning up in a tizzy.

Celeb culture is proof of stake

Customers are naturally butt hurt for following celebs to FTX and handing over their money to get rekt. While there should be a sense of personal responsibility, that is not the fiat way, you have to blame others for the issues you face, because you don't want to face the truth, that you were a dumbass.

If your investment strategy consists of due diligence that only goes as far as well Tom Brady uses FTX so I better use it, he is rich. So I will use what rich people use even though the rich people get paid to say they use it.

You are a brain-dead moron and some or other scam would come and take your money, but this is fiat world, where it's all about proof of stake, not proof of work.

Now, these butt-hurt customers want to come after others' stake after losing their stake. A class action lawsuit has been filed against Sam Bankman-Fried and a slew of celebrities who helped to promote FTX as a safe place to hold and trade crypto. Defendants include Tom Brady, Gisele Bündchen, Steph Curry, Shaquille O'Neal, David Ortiz, Naomi Osaka, and Larry David. 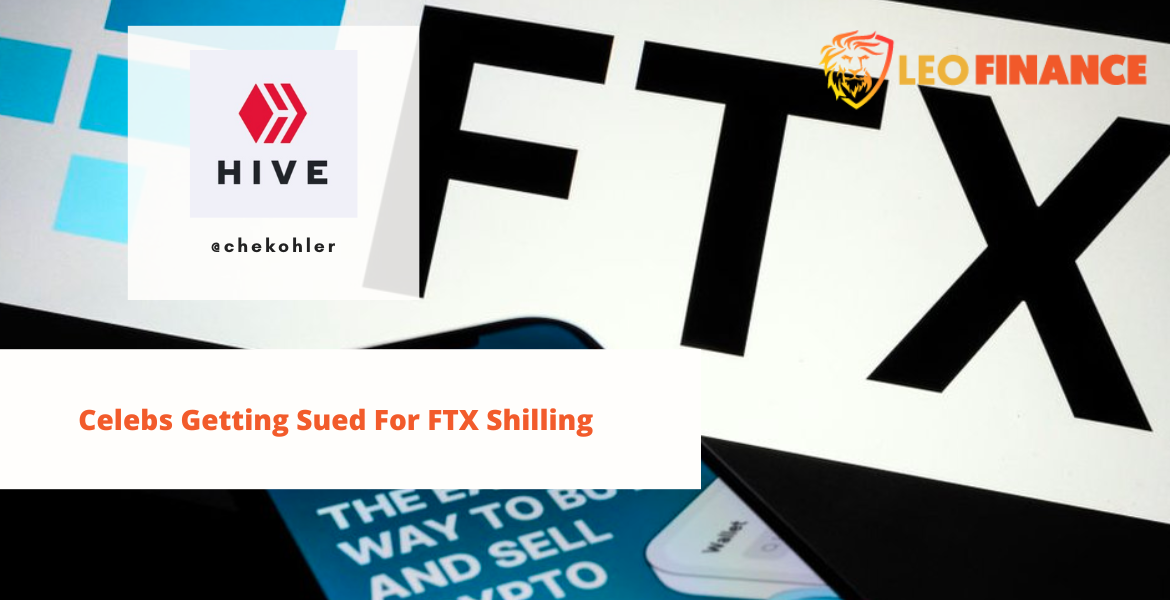 The suit alleges that the celebrities violated the anti-touting provisions of securities laws by failing to disclose the nature, scope, and amount they were compensated to promote the platform.

Now FTX took billions from customers and investors and handed it over to celebs, influencers and marketing companies to drum up interest in its ponzi and because these moronic celebs don't understand you shouldn't be shilling financial products and financial services, they just think its another product like a handbag they are surprised.

You can't just read a script and put your name on it collect a pay cheque and think everything is going to be fine, you are encouraging deeply dumb people to invest based on your word and now its coming home to roost.

A complaint was filed in federal court in Florida by Edwin Garrison on behalf of all the “American consumers” who “collectively sustained over $11 billion dollars in damages” from FTX’s recent crash, now how much they'll get, which celebs will settle and where that money goes and is disrupted should they win this case is beyond me but this is the fall out of not writing down 24 words and being a fucking adult.

While I think that celebs getting their clocks cleaned and putting their bankroll up for grabs is a good idea, I think it will keep them thinking twice about these deals and staying in their lane, I don't think it should end there.

Shillfluencers also have a part to play in the endless shilling of FTX and they make a fair amount of bones to read scripts and pretend it's their own thoughts online.

I think they should be pulled in to face the music too, not to increase the pool of capital that investors could claim back, but for fucks sake just to curb the amount of shilling online and hiding behind not financial advice, its bullshit and someone needs to get slapped around by the law so others are fearful of pulling these stunts.

Grant that the true organ with which the beautiful is apprehended is the imagination, and it follows that all arts are likely to affect the feelings indirectly.
(Eduard Hanslick)
0
0
0.000
Reply
Menu
Explore Pool
Trade
Trade NEOXAG