GBTC Trading At Biggest Discount EVER

In today's edition of YIYL, (You Invest, You Lose) we turn our attention back to the paper bitcoin space, and boy is it not going well for a lot of people who shilled this product. GBTC is a custodial product where you never have control over your bitcoin, you purchase shares in the trust and the trust goes out and purchases bitcoin.

The product is aimed at those who want to acquire some bitcoin exposure through their pension fund or looking to purchase bitcoin but are not keen on the holding of keys and don't want to deal directly with an exchange.

Now I can slightly understand the pension/IRA reasoning because there are some tax benefits to it compared to just withdrawing your money and buying real bitcoin, but for that benefit, there are also limitations, you don't own the bitcoin, you only have a claim to bitcoin you hope is in the treasury of Grayscale.

GBTC next in the spotlight

Grayscale Bitcoin Trust (GBTC), the largest publicly traded crypto fund, looked like it was doing pretty well but as fate would have it instead of sticking to bitcoin, they started to roll out these trusts to shitcoins and personally I think that's where they started to go off the rails.

GBTC has been trading at a discount to the net asset value of the holdings for some time now, which isn't strange considering the massive sell-offs we've seen since the all-time high but since the FTX fallout, it's been getting real at Grayscale.

GBTC hit record lows in the wake of the FTX collapse. The fund was trading at nearly a 50% discount on the underlying Bitcoin asset, as holders rushed to sell off their GBTC holdings. The panic to get some of your money back has not been held by GBTC's reluctance to give the market some much-needed confidence.

As holders pushed Grayscale to respond with proof of reserves things started to get a little hairy. 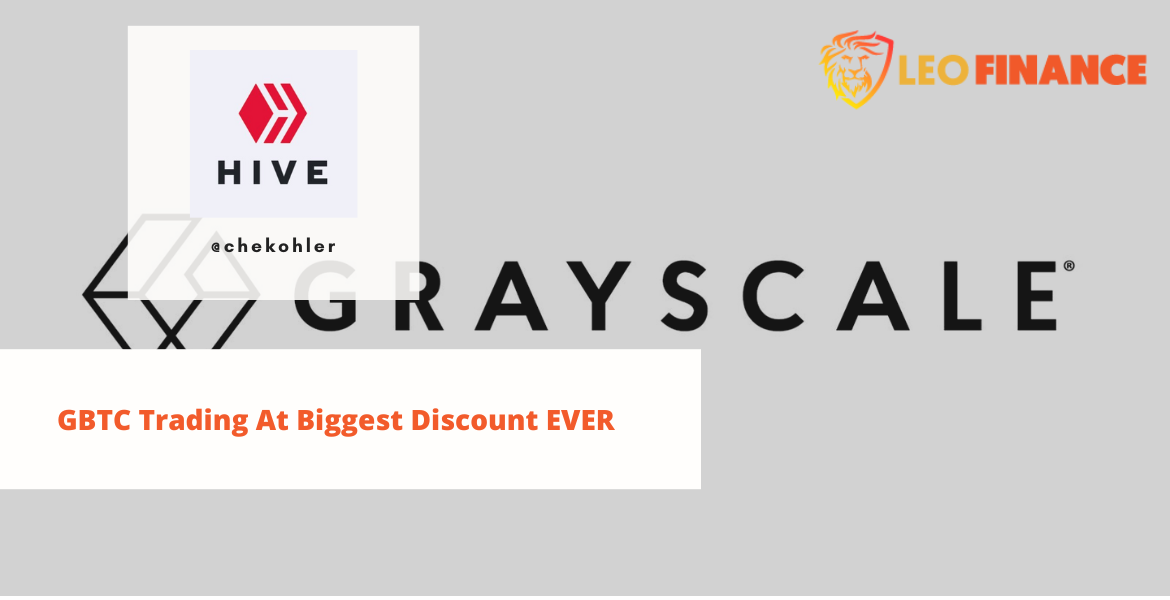 "due to security concerns, we do not make such on-chain wallet information and confirmation information publicly available through a cryptographic Proof-of-Reserve, or other advanced cryptographic accounting procedure".

They did not elaborate on what these "security concerns" might be, and stoked fears in some that the company might not have the backing it ought to have given its claimed positions and exposure to the bitcoin market.

Grayscale published a letter from Coinbase that basically said "we have Grayscale's assets, we promise", which did not seem to assuage the fears that have formed around centralized entities promising they have the assets they claim. This is understandable, given that FTX made similar promises, only to collapse.

Now, this doesn't do much for investors, because anyone who understands bitcoin knows that it is pretty simple to sign an on-chain transaction to prove you have the signing keys to a certain address. It can be proved on chain, very easily and cheaply and even if they didn't know how to do it, it's rather simple to hire a consultant to coach the team on the process.

Considering the fact that they use Coinbase custody makes it even fishier because surely an exchange would know how to sign a proof of ownership of a wallet, that should be a no-brainer.

So who is at fault here? Grayscale or Coinbase or a little bit of both? Only time will tell.

The share price of the $10.5bn Grayscale Bitcoin Trust (GBTC), which owns 3.5% of the world’s bitcoin, has plummeted to a 45% discount to the value of its underlying assets as investors have embarked on an increasingly desperate scramble to exit and with poor communication like this, I don't see how this sell-off won't continue.

Despite the attractive possible upside if Grayscale has all the BTC they claim to own, there are very few buyers willing to take that risk and pocket a fat premium, which just shows you the level of confidence the market has in this product right now.

If the worst fears are realized and GBTC isn't properly collateralized oh boy you an expect another big leg down in the bitcoin price, 10 - 13k would be my prediction, but with so many things going bust at the same time, another drop could trigger even more margin calls and pull even more people and institutions down with it.