If You Can Pause Your Chain, You're Not Decentralised

@chekohler 76
about 2 months ago (Edited)
LeoFinance

I don't know how many times I will have to explain to people that nothing in cryptocurrency is decentralised and it's all a shell game, creating leveraged bets on top of bitcoin. The game of cryptocurrency is to suck your money into their system and keep you there as long as possible, while the owners and early investors extract fiat or bitcoin on the other end.

No ones listening, I am the crazy person in the room, I don't get it, yet I speak facts, and every counter-argument is just a marketing pitch or a fairytale story that discounts risk and understanding of the limitations of a technologt.

Bitcoin moves slow because it has so much decentralisation to deal with while shitcoins move fast, because centralisaiton is more efficient, but when you move fast, you make miscalculations and you end up burning yourself in the process, as we've seen countless times.

If you still believe that other chains are decentralised, can you explain to me how you pause a chain? How does that work? If you have different people with incentives all using a network, how do you get everyone to agree at once? It's either through collusion or through the fact that a central authority runs the chain. 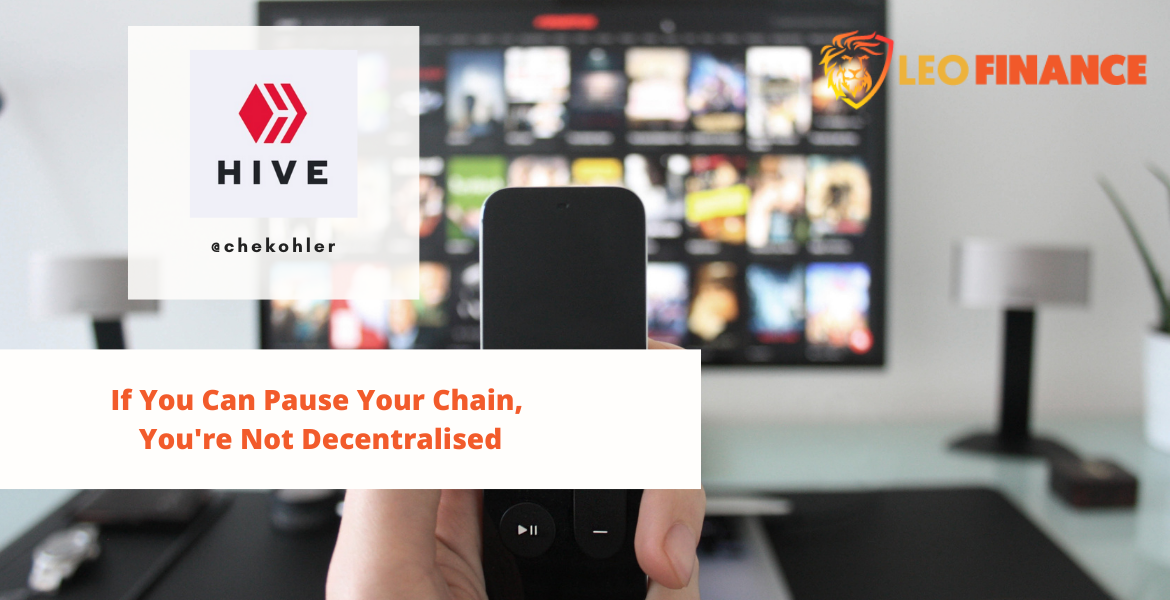 Solana the low fee blockchain has been suckering in people into its ecosystem for some time now, the centralised ETH clone's claim to fame is you can move ETH goodies to its low fee ecosystem. We've already seen how dumb that is with the wormhole hack, but that I've covered before if you want to check it out.

Low fees mean a low barrier to entry which means it costs very little to attack the network, Solana has been plagued by bots and has seen the chain halted at least 7 times.

After the terra massacre, they were still trying to rescue the situation and restore the peg by minting more Luna. As the price went down some idiots were buying it thinking it can't fall any lower, but the smart money continued to short it.

To save face Luna had to pause the chain

This stupid bridging story which for the life of me makes no sense, has got shitcoiners all excited to re-introduce the double-spend problem. Tokens can be rehyphothicated onto other chains for use there and double the supply with the original supply locked in a smart contract and managed by a centralised oracle like ChainLink, yes I said centralised.

How do I know? Well BlizzFinance a protocol on Avalance uses it to match its Luna tokens, and when Chainlink paused its oracle, it pretty much rekt their system.

Chainlink pausing the LUNA oracle allowed several attackers to deposit millions of LUNA which is still worth $0.10 according to the Chainlink oracle to borrow all the collateral.

The protocol has been drained before we could pause due to our timelock.

So again, how many times do I have to keep reminding you of this? How many more examples do I have to list before the larping stops? I honestly don't go deep searching for this nonsense, shitcoiners just make it so easy with their blundering ability to fuck up all the time.

@chekohler 76
about 2 months ago (Edited)

Nope, and it won't and it doesn't need to, why do crypto projects have to larp on about decentralisation, like it means anything to their ecosystem. You can be a perfectly usable product as a centralised serivce

Oh been meaning to ask, what's your take on LN addresses would v4v be able to support it? It would make sending too and from apps like fountain alot easier

@brianoflondon 75
about 2 months ago (Edited)

Right now there is work underway to make LN Addresses support the Keysend payments which we need for Value 4 Value payments.

I also pretty much believe I can set up a forward so [email protected] will become a valid Lightning address in the very near future.

Update: I just spent 20 mins looking at it and I realise now I've already built most of what I need. I have to turn the API I've already got to generate invoices for my system into what the LNURLp system expects.

The part for Keysend payments doesn't exist yet, but I will be able to make any Hive user be able to receive 1,000 to 100,000 sats as Hive for sure. I'm not sure how long it will take me but I can see that I have most of the parts in place.

I really never understood the decentralized thing. Bitcoin is decentralized and that's important but the rest of these chains just need to work and not cost 3 months pay to do a transaction because the network gets a little busy.

I don't know why everyone tries to claim they're decentralized and I understand even less why so many people believe it. If anything it just seems to hinder progress.

Exactly do I need to have my games be decentralised? No, do I need my shitposts to be broadcast to a bunch of nodes taking up space and offering no value for that storage? No, cloud services and SQL databases work just fine, they are cheaper and more efficient, I think decentralisation is used as a marketing gimmick so people will stomach sub par performance they wouldn't accept if this thing just said I am a game and not a blockchain game

Even bitcoin can do more to keep the rest of its stack decentralised, so no time to even rest on that, but yeah the rest are just distributed between a few parties, who could easily collude

I don't know how many times I will have to explain to people that nothing in cryptocurrency is decentralised and it's all a shell game, creating leveraged bets on top of bitcoin. The game of cryptocurrency is to suck your money into their system and keep you there as long as possible, while the owners and early investors extract fiat or bitcoin on the other end.

Dear @chekohler, I cannot understand the mechanistic concept of your argument, but my feelings support your argument!

From my point of view, decentralization was understood as the act of not paying taxes and fees to the state and banks whenever individuals transact and save.

In the world I live in, individuals' property, transactions, and personal information are all monitored by the state.
So, I was hoping that by using Bitcoin I would be freed from state scrutiny.

No it wasn't against paying taxes, it's against inflation and against middlemen fees, not paying your taxes is just going to land you in shit mate, that is still a fantasy, states aren't going away anytime soon.

No, they shit the bed when people get too confident and overleverage their bets based on momentum and sentiment and eventually the market has to flush out that leverage

The world I live in is creating new names for taxes on cryptocurrencies.
So, I have to study to avoid heavy taxes.😅

The centralization is funny especially when they are calling decentralization left and right. Luna kept saying that and that it’s getting more decentralized! But yet they halted the chain and all decided to print trillions more Luna in a quick manner lol sure buddy!

LOL all these chains are VC funded tech companies with a few outsourced workers in the form of validators, it's legit just a wework with tokens but they ask no questions, hear no lies

No ones listening, I am the crazy person in the room.

Yeah, Exactly.
Nobody cares Decentralization, all cares for money to be made.

How many wallet are actually holding bitcoin because it is Decentralized vs Bitcoin will make them rich in future.

So majority is not even caring for BTC decentralization too, it is all quick money need to be made.

Completely agree, it doesn't matter bitcoin or shitcoins the vast majority are looking to score quick fiat profits, but when we look at all the chains, the amount of people holding bitcoin on-chain for a year or more continues to grow, so that gives me hope

All crypto is a scam or a naive misapplication of technology