In today's edition of YIYL, (You Invest, You Lose) we take a look at the oh-so-wonderful world of on-chain governance and how combining proof of stake, blockchain, voting, and incorporating a company with an on-chain treasury makes you vastly inferior to your competitors.

I don't know how people can claim these things are decentralised when they are run by a chain with less than 10 nodes and it's borrowed infrastructure and on top of it the way to decide governance are tokens mined out of thin air where the creators will always have the incentive to hold on tight to a majority of the supply but let's sweep all that shit under the rug shall we?

Olympus DAO is a DeFi protocol with a treasury that backs the OHM token. It offers cryptocurrency bonds denominated in vested OHM tokens and the DAO issues OHM tokens at a discount to investors in exchange for their cryptocurrencies, a process designed to increase its treasury over time. 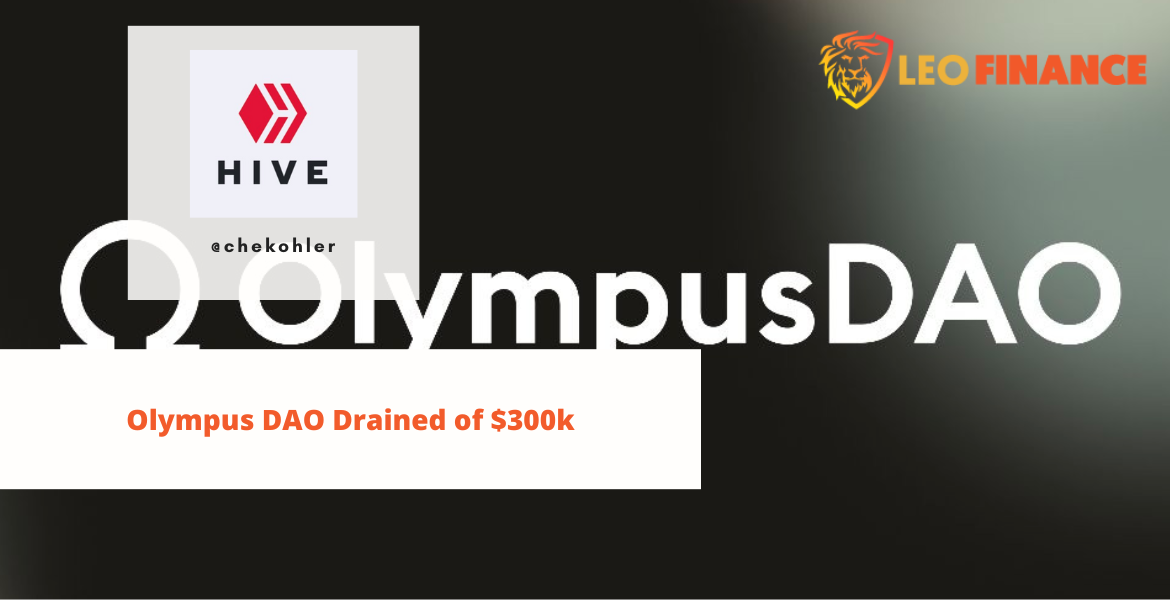 In the latest DAO drama, we saw a user drain Olumpus DAO of its funds. According to reports an insufficient validation on an OHM smart contract at Bond Protocol allowed an attacker to drain 30,437 OHM (~$300,000) from the Olympus DAO defi protocol.

The affected contract, known as “BondFixedExpiryTeller,” was used to open bonds denominated in the Olympus DAO’s OHM tokens. The contract lacked a validation input in the “redeem() function,” which allowed the attacker to trick input values to place his own values in the input and redeem funds.

Olympus DAO wrote in an announcement that

"This bug was not found by 3 auditors, nor by our internal code review, nor reported via our Immunefi bug bounty."

As if the fact that several parties working on your code are incompetent is an excuse, we sure are in a clown world if that's how you speak to the people hodling their funds with you and you assure them with all of us missed this one so its cool bro

The Olympus team also noted that because they had done a phased rollout of the contract, only a limited amount of the project's substantial funds were at risk.

The latest drama hasn't phased the token too much it might have shaved off a 20% on its current trading range, but clearly people who hold this token are already so demoralised they couldn't give a fuck anymore. 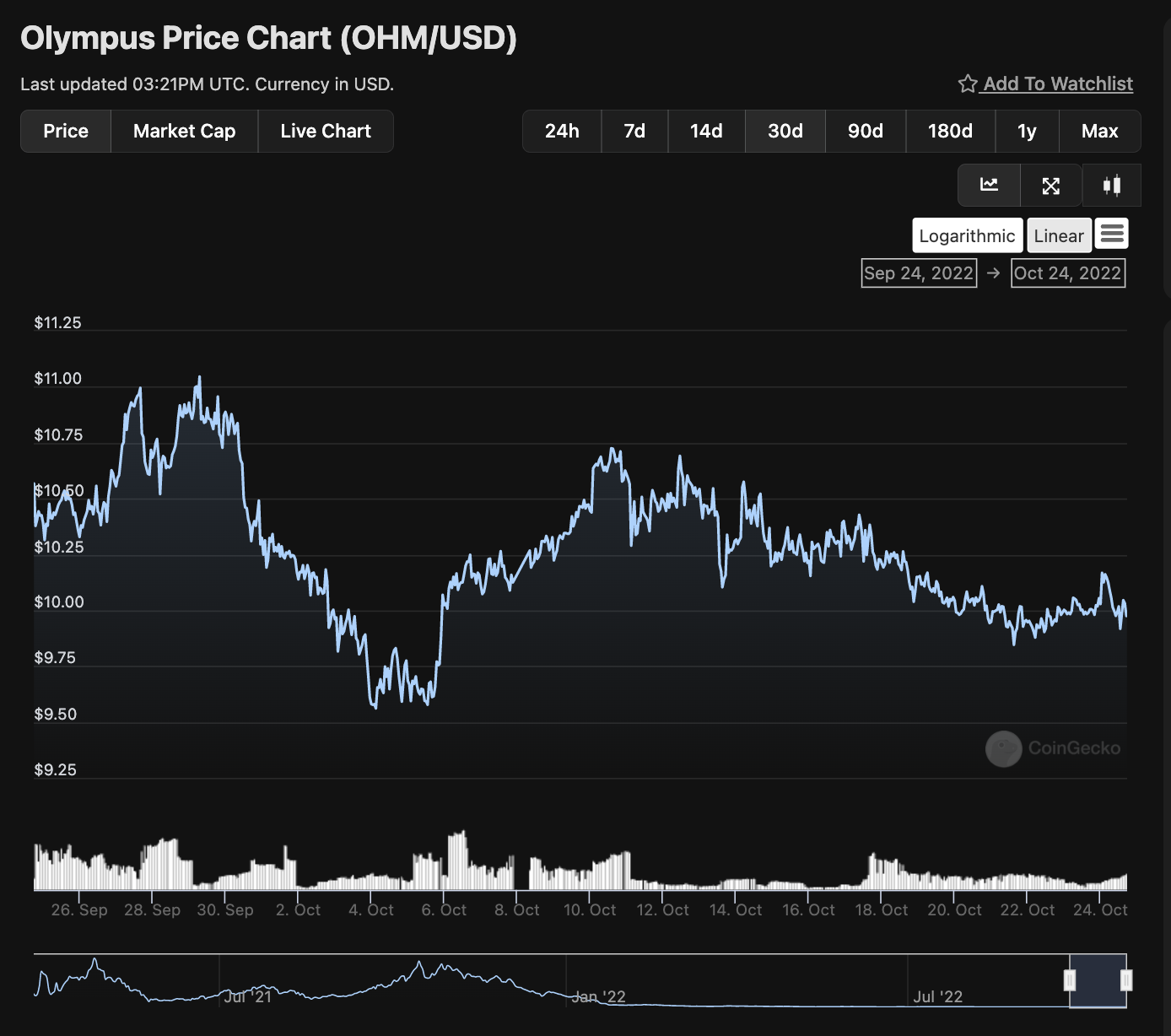 While the latest price action might not be concerning, if you zoom out, you'll see that the Olympus DOA has fallen from a market cap of 4 billion to 200 million, and with that shaving off of value, we saw the token drop from $1,415.26 and fall 99.3% to its current range of $9.99.

Bless the heart of anyone who road that thing down and continues to hold hoping for better days, well done on being exit liquidity. 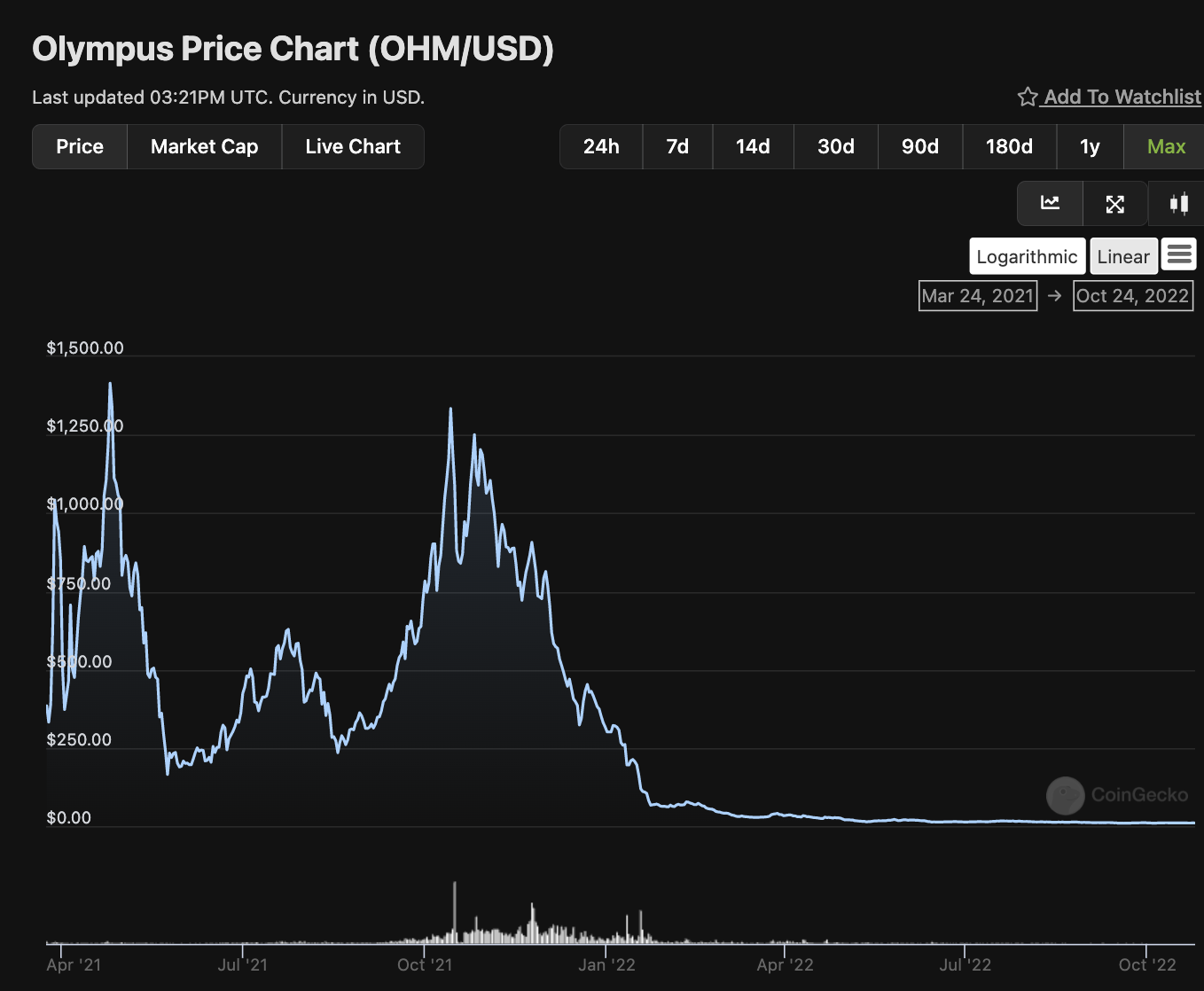 The return of the funds

Olympus DAO initially responded to the hack with announced that they would "compensate all affected bonders in full", but later revealed that the stolen funds had been returned by the user. According to reports, the Olympus team had successfully tracked the hacker and negotiated the return of the funds.

Now the people still holding these tokens must have either seen it as a donation to someone else or a lesson in stupidity because 99% down is a pretty tough ask to come back from especially with those good old fake yields now coming to an end.

At the end of September, Olympus DAO explained in a thread how the project would do away with its high annual percentage yield (APY), which was leveraged to bootstrap the protocol and initialize OHM’s tokenomics.

Lol this is yet another example of the nocoiners leaving their money in the bank to be drained by inflation still outperforming shitcoiners.

Another negative story, but by now we are used to it. This market now attracts everyone, good and bad, capable and less able