Shitcoins Are Horrible For HODLing

In today's edition of YIYL, we consider the popular rallying cry hodling, created by the bitcoiners and like everything bitcoin, ripped off by the shitcoiners. Now hodling bitcoin is a savings mantra backed by the growth of the network, robustness of the network, the verification of the scarcity and the knowledge of the issuance, all aspects that are fundamental to making hodling worthwhile, but shitcoiners will use it even though their coins have none of these aspects, the shitcoin promoters use this term to sucker people into thinking they are getting something similar to bitcoin when it couldn't be more different.

The ability to self-custody of your bitcoin and enjoy the price appreciation built into the asset that supports the network is a revolutionary act. The idea of being able to save is coming back to people's minds now with the help of bitcoin, those who understand bitcoin, get the importance of hodling, and those that don't will end up with a lot less bitcoin in the future as they try to gamble their way into outperforming bitcoin.

An action that is completely futile in my opinion, but I do love to see people blow themselves up trying to outcompete bitcoin.

What people don't understand is CAGR, you don't need a return on your money if your money already appreciates in value, as I've said before only inferior assets require a return.

In bitcoin, we all know what hodling is about, not that all bitcoiners hodl, some will sell, some will try to chase returns and lose their bitcoin but those who stay the course tend to do the best.

Shitcoiners however, don't have the luxury of hodling, but the marketing and narrative are that you should because holding helps the founders and insiders dump on you. 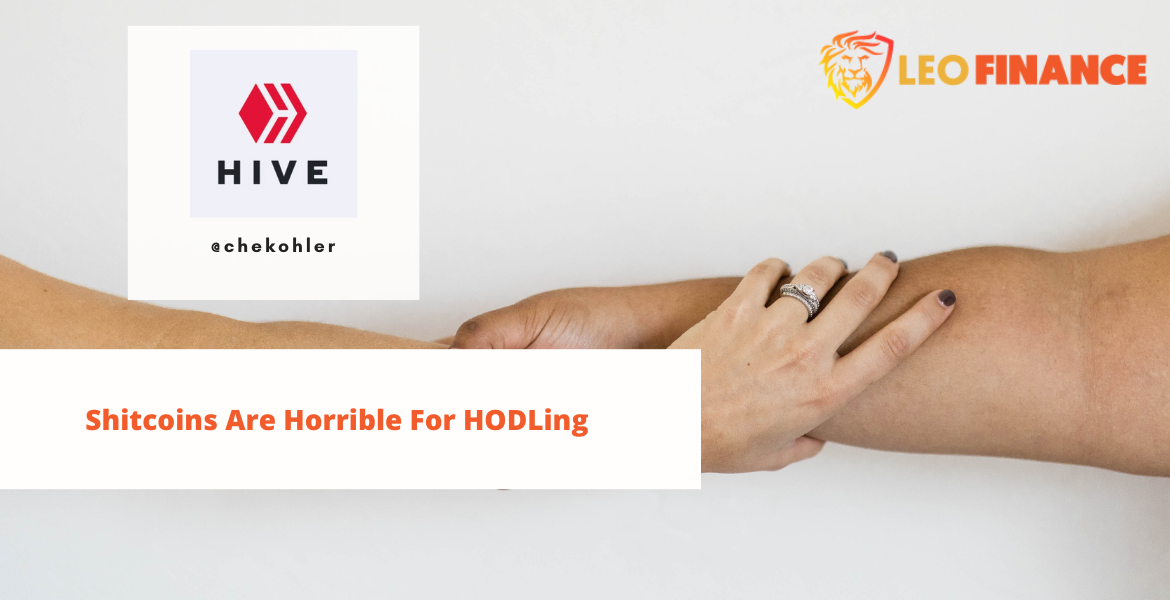 To someone who has been in the space long enough, to have seen cycles play out, to look into the tech, the economic, and the false promises, I can tell you one thing, shitcoins are not good for hodling.

They were the exception to the rule for 1 cycle, over the next cycle we can already see how they are bleeding out against bitcoin and won't be able to repeat that feat.

So the opportunity cost of holding a shitcoin is evident, you're ending up with fewer satoshis than if you simply bought bitcoin.

Now you can try to make up the difference with staking, DEFI, and other shitcoin yield farming but there is no guarantee that the risk will pay off or that there will be enough liquidity to realise the return.

Literally 3 sh*tcoins out of 20000 have ever had a new ATH in BTC terms three or more years after the first ATH.

You can trade sh*tcoins, but it's dumb to hold them.

Their inferior economics are exposed with time

As the value in the network continues to dilute people grow disillusioned and move into harder money assets like bitcoin.

While shitcoins being centralised can try things like burning coins or trying to change the inflation rate it's not going to matter because once you make a change to the monetary policy you break the sanctity of the agreement you had with your token holders and they leave.

Speculators are going to speculate

Now if you want to shitcoin, and try to swing trade and have fun fucking around on the internet by all means. There is nothing wrong with a good bit of gambling, but this isn't some investment where you're going to make out like a bandit, for most shitcoiners they can and will be left in ruins and that's okay, you need to learn your lesson sometime.

Getting rich on paper is a hell of a drug, it's the promise shitcoins survive on and if they can make you wealthy on paper and feed your greed, while you look at depreciating fiat values that cannot be realised while they dump for real money, well then the cycle will continue.

Tbh I am not even counting shitcoins in my portfolio!. Although, I am pretty sure they will not really hold any sort of value at this point I suppose!

Lol I think that's a good way to look at it, if you see all shitcoins as zero and you manage to get out something then you never dissapoitned

It is one reason it is better to have the majority in Bitcoin. Also, value investing has proved to outperform for the last 100 years in the stock market. It is better to have most of your investment in one place where your value is increasing slowly but steadily.

The drawback to btc is that if I were to save a few bucks in it, when it moons so do the fees and then my 'profits' go to the miners.
Ltc and bch don't have this built in infirmity.