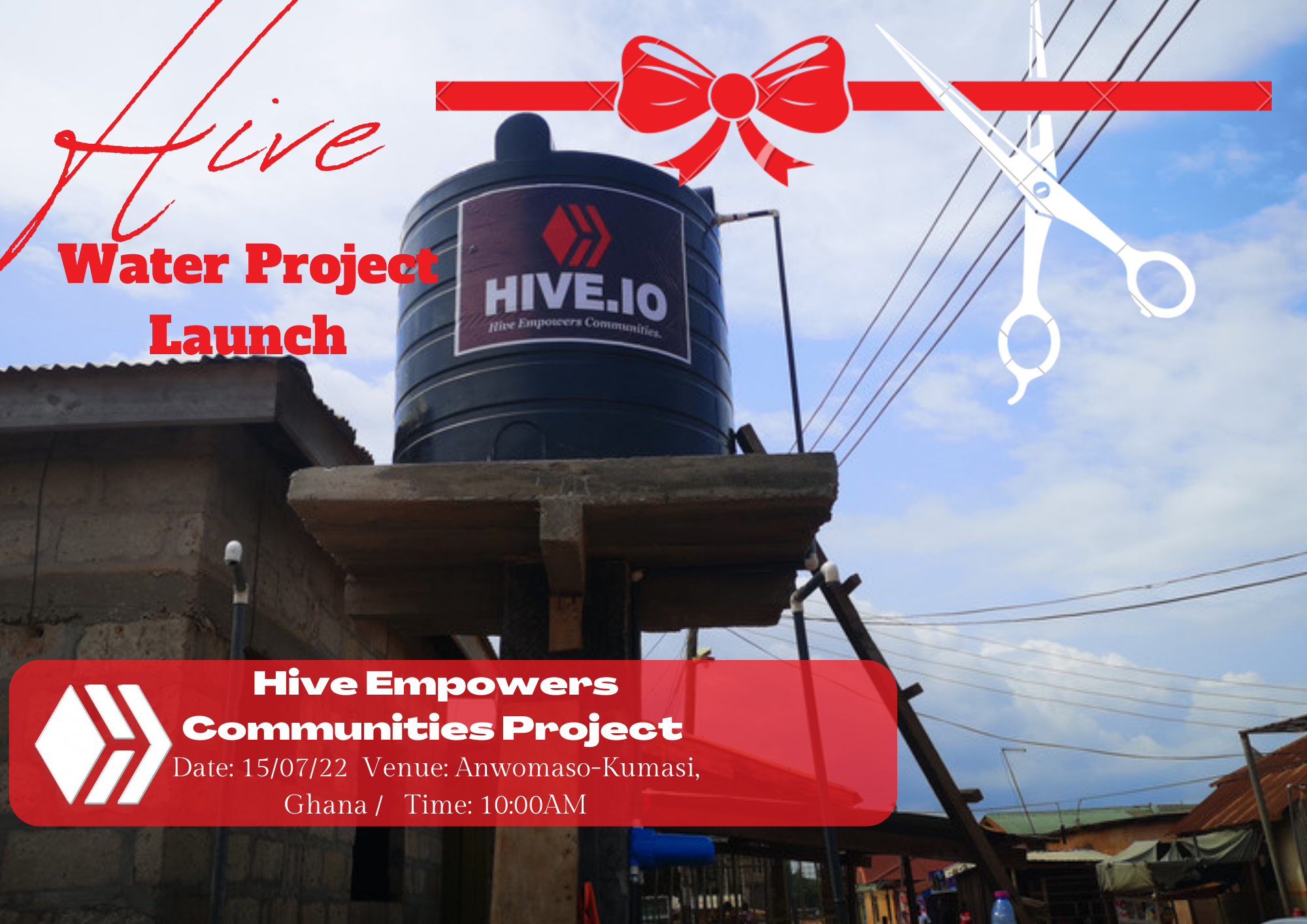 We are happy to inform the Hive community that the third Hive-powered project has been completed successfully and will be launched tomorrow.The entire project had to go through three phases to be finished, as was described in our previous updates posts.

The project's first phase involved drilling the borehole and pump installation. The second phase had involved building the tower that would house the water tank, the wall for the taps, and finished with plumbing and electrical work. Phase three which is about the launch and media coverage for more publicity, would be the last phase now that we have successfully completed the first two phases. It's a crucial stage where we meet the residents of Anwomaso at the project site and hand over the water facility to them. Tomorrow's event will allow us to spread the word about Hive, exposing its potential and inviting everyone who wants to be part of the revolution to join us. With this launch, we've decided to deliver a presentation to people in the community, particularly to the youths, who would like to join us on Hive.

Again, we have a media crew that will capture every moment of the event with their cameras and then share on their various online platforms to help spread the word about the project and raise awareness about Hive.

This is one of the most essential aspects in which we will use these platforms to educate others about Hive.

Following the launch, we want to hold a conference inviting all people from all walks of life to give presentations on Hive and expose them to the various possibilities in the world of Hive. We are really pleased with the progress accomplished thus far, and we are also pleased that people are learning about Hive since we began the Hive empowers communities projects in Ghana.

We have accepted some invitations from radio stations that have learnt about the continuing Hive Projects, and we will provide updates on that. We want to use the opportunity following the launch to engage prospective investors and individuals as we use various platforms to educate them about Hive.

Our appreciation goes to @valueplan the sponsor of the project. We would also like to mention the following people:@guiltyparties, @theycallmedan, @ocd, @ocdb, @ranchorelaxo, @acidyo,@trafalgar, @adetorrent, @newsflash @resonator, @ackza, @daveks,@taskmaster4450, @challengedac, @v4vapid, @canadian-coconut, @haejin, @canadian-coconut @daveks, @lichtblick, @bhattg @elevator09 who have given us massive support to see this project to its final ends and have ensured that Hive continues to impact lives. Again to everyone who has voted us, reblog our post, we really appreciate the love and the support. Thank you

This is so amazing!!!! This is the first time I've seen crypto actually build and supply a renewable, free, public good.

THis is literally what crypto and quadratic funding was meant to do and you're years ahead of the curve I think. This is so inspiring and I think you guys and girls out there who got this project up and running are real-life superheros.

I appreciate your kind words, @estthebugs. People are now able to see how crypto is used in the real world, thus it's great that Hive has taken the initiative in this area. We are pleased to have overseen these projects in Ghana and to have gained Hive exposure in the process.

Another history is about to be made in Ghana.

So glad that we are part of it, Hive made this possible

Dear @collinz, sorry to jump in a bit off topic but may I ask you to support the HiveSQL proposal?
It lost its funding recently and your help would be much appreciated to keep the HiveSQL service free for the Hive community.
You can do it on Peakd, Ecency, Hive.blog or using HiveSigner.

Thank you for your support @collinz, really appreciate it! 👍

we will surely meet up for this opening

Sure, hope to see you

Amen and amen. Imagine hive does about 20 boreholes for villages in Ghana. This third borehole has already gained attention as it serves the people of Anwomaso community. Thanks too.

Wow - that didnt take long for the 3rd project at all - you are doing great - well done !
!PGM

Amazing job @collinz been great watching it all unfold you have done so good much success to all your projects😎
!ALIVE
!BBH
I will be including this content on the @heartbeatonhive curation collection

@collinz! You Are Alive so I just staked 0.1 $ALIVE to your account on behalf of @heartbeatonhive. (1/20)