I am getting more serious about playing the Sorare.com NFT Fantasy Football Game this new football season and will be keeping track of my personal activity in this series of posts.

There were 3 international weeks for Sorare where I did Submit a team but simply was not competitive as only a few of the played actually were in the team playing. So mostly it was another case of building some player experience. 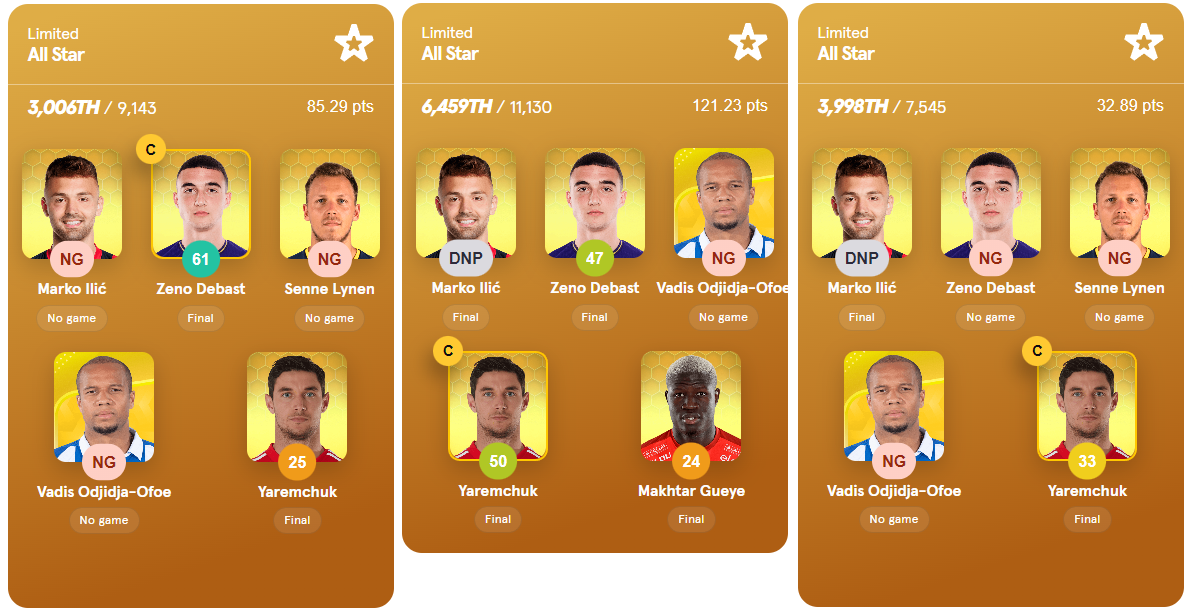 From the looks of it, many of the submitted teams by managers were full of players who didn't have matches or did not play. This really makes me just want to aquire new player cards to choose from.

This was my first week yet as Kortrijk right now is horrible which reflects on the score of my goalkeeper Illic who gets a lot of goals against. I could have been off much better yet still falling short if I put Lynnen and Koita in my main team. 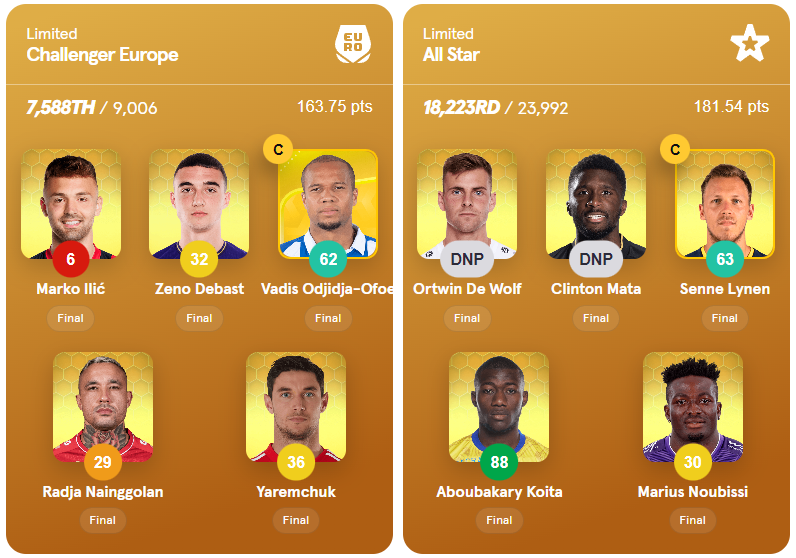 I am looking to buy some new players but I tend to make offers to those that are selling that are set slightly lower in the hope they sell them into that.

Once again this is a really hard week to make choises as some players had international matches and might have some fatigue while others sometimes start on the bench. This makes it almost impossible to play optimally as any player can have an off week or a stand-out performance.

Not having a goalkeeper that plays by default screws my secondary team but players will get leveled up regardless.

I'm doing the recalculation every 2 weeks as it takes quite some time manually now that I start to own more players.

I'm still having fun with Sorare and will continue to work my way up to hopefully getting some better results over time while doing some profitable trades. Anyone that is interested in joining me on my Sorare Journey, Using my Sign-Up Link will get you a free Limited card on buying once you collected your 5 first auction cards.

I'll bring an update next week with the results and how I'm moving forward.

I'm also involved in Sorare, I started at some point to invest in players, but for some reason, I didn't go full on it. I still am getting offers notification by mail, but the price difference is not significant to pull the trigger. Still becoming more active and expanding the card base probably sums up better.

I also initially got in with a really small investment just to try it out not really taking it seriously. Now I'm really enjoying the game and believe I at least won't get crushed on it and likely will end up earning a bit over the years while it really gives added enjoyment following the Belgian league. Most importantly, it also doesn't really require that much time, you just need to get into some kind of routine to submit your team weekly and these blog posts really help me with that.