@costanza 73
about 2 months ago
LeoFinance

After having a crazy period of growth last year in Splinterlands where demand was far higher than the supply, we are now back in a zone where the supply of some cards is greater than the demands and prices of 0.01$ for common Reward Cards. I started buying some of them for these reasons.

I have been in Splinterlands since October 2018, and I have seen this exact pattern before only partly making use of it at the time. The thing with reward cards is that while they are printed, all players are getting them and there is no need to buy them while at the same time there is a lot of selling pressure from those that want to make short-term gains. However, at some point the printing stops and all the new players who want the card will have to buy them from the market with it being the cheapest way to enter.

I did in the past buy a lot of the reward cards during the beta set in order to provide a win-win sign-up deal which helped new players get started while I was able to use the affiliate earnings to ramp this up. This now puts me in a situation where I have a lot of rather rare cards that are quite powerful which I'm earning some rental income on.

I picked the Mushroom Seer cards up way back while they were really cheap and already sold a couple single editions taking profit on them a while back. Now single editions are going for 12.50$ as it's a card that is high in the meta right now.

I also remember picking up 100+ Nectar Queen cards when they were going for 0.01$ with the idea it's 1$ for 100 and who knows where they will go. Right now in a full bear market, a single copy of these cards goes for 0.27$. I have to adjust the rental prices though of the level 2 cards.

At the time of buying the cheap reward cards in the past there was no guarantee whatsoever that the game would get some adoption and this is exactly the same right now. The devs did get overly optimistic on the growth of the player base during the time they calculated the print rate of the current reward set which leaves the question if there is enough growth left for there to be enough demand once they are fully printed. Some reasons Why I believe there will be...

1. Splinterlands is becoming a Real Game: In the past, I would have argued that the game didn't provide enough fun for real gamers to enjoy it and that it was all just about the reward with the card game as a gimmick for that. Since the latest Ranked Rewards Update though, the fun and competitiveness has increased a lot to the point where I'm buying cards not so much with an eye to get a return but to play them in my matches. As it showed that over 50% of the player base were bots, I would argue that there is a lot of room left for more players to discover the game.

2. Demand For Collection Power: Collection Power for many remains a bottleneck in order to climb higher leagues and get more/better rewards so there always will be a demand for just that in one way or another. The most cost-effective way to get more collection power is by buying on renting the cards that give the best rate which by far are the cheap reward cards. The Epic Reward Cards right now at a rate of 1000 Collection Power / 1 DEC give a +20% yearly yield if they get rented.

3. Deflationary Mechanics After Full Print: In order to get a common card to Max Level, 400 of them need to be merged which will reduces the total supply constantly after they are fully printed. In case DEC would have another pump at some point in time, it might also become favorable to burn cards for DEC reducing the supply more which is something that already happened in the past.

4. Airdrop Earnings: Even though there are only 40 days left in the airdrop, that will be 40 days to earn a bit on SPS on the investment which when staked will give Staking rewards and contribute to getting vouchers and in the future will allow for more benefits and earnings.

5. Usecase For Land Expansion: We already know that Summoners and Monsters will have to be put (Staked) on Land Plots in order for players to mint Spells & Items. For as far as I know, there will be no fundamental difference between a 0.01$ Common Venari Heatsmith & a Common Deeplurker 0.27$ aside from the stats or abilities which in some cases likely will favor the Heatsmith. As a massive card supply shock can be expected with the land, Reward cards should also there offer the best bang for the buck.

6. Possible New Snapshot System: Right now, each day a snapshot gets taken for the SPS airdrop and all DEC value of cards counts as part of this. While it is expected to end once the airdrop is over, I have a suspicion that this mechanic at some time will be back serving a purpose in the game which will make demand for cards & collection power go up.

Reward Cards That I am Buying
From the Common Reward Cards, I regularly use the Pelacor Bandit which given the high speeld and Fly ability even at low level is often impossible to hit by the opponent. The Pelacor Mercenary is a good tank that has self-heal at level 6, & the Pelacor Conjuror is also a useful card for 2 mana.

From The Rare Reward Cards, the Venari Wavesmith used to be worth 5$+ at the time when All the new players came in as it was the meta card at lower levels getting +1 Magic Damage from Arlic which was included as a starter card. The Venari Crystalsmith provides good tank heal and also will have its use once Modern Format is introduced

From the Epic Reward cards, I most use the Uraeus which is a Neutral Card that also has Armor at level 1 and poison at level 4. I also like the Djinn Renova for 0.14$

The legendary cards are easily getting rented as they provide an easy fast way for players to get collection power. The Djinn Oshannus also is a card that acts as a great 2nd tank in high mana battles.

I would not be surprised to see prices go even lower on the Epic & Legendary cards during this bear market as the print rate has gone up since the new system with the print so far being around halfway. 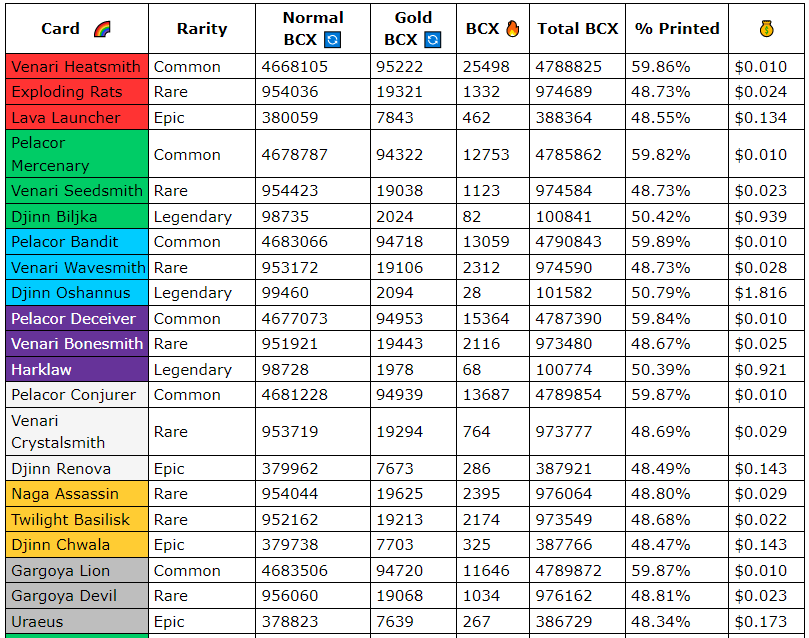 Even though it looks like the devs went way to hard on the supply of these reward cards, the fact that the enjoyment of playing Splinterlands has gone up a lot while there is still so much potential to onboard more players make me pick up some of these cheap reward cards right. All while right now, nobody really cares about them and there is a lot of selling. If I could go back in time, I would have hoarded a lot more of the old reward cards while they were being dumped and there are enough good arguments to take a small shot on buying them now with a time horizon of a couple years potentually earnings some passive income on them in the meantime.

Not a bad tactic!
Still playing with the idea to start laying off some cards. The value of the deck did better than the overall crypto market, so some bargains could be made.

I 100% get what you mean and might do the same with some of the older cards where I did really well on. Still, it remains hard to actually pull the trigger to sell cards.

That is indeed a hard nut to crack. Will start selling cards which I don't use. Planning to decrease the dec value with around $1K. Which will be a start. I can use this to invest into other coins, which couldn't be a bad deal with the current marker situation.
!BEER

It's great to see them drop below a penny. I have been waiting for this level before buying in. In the past sets I did the same.

But at the same time, when I see the DEC price of the cards rising (I was buying them at under 9-10 DEC; now they are starting around 11+ DEC) I realize it is DEC that's falling and not the card prices. But still, I suppose we are also making more DEC now so that balances out.

At any rate, I've been scooping up several reward cards every day.

True, in crypto it's often relative unless you come in with fresh Fiat Money. DEC also eventually at some point will go back to the peg. It needs to go a lot lower before I would consider stacking up on it though. It does look like it will be quite a long stretch before the next wave of adoption comes.

Having a longer-term vision helps to pull the trigger on picking some of these cards up along the way to profit way later down the line.

While all of the rewards cards you listed are really awesome. I think the top 3 would be Pelacor Conjurer, Uraeus and Pelacor Bandit. Djinn Oshannus is the top one among legendary ones.

100% agree, those are also my favorites

So nice reward cards you got.

I'm late to the party with this comment, but I've also been buying up a lot of the rewards cards. It seems like there are too many of them at the moment, but some will get burned, some will be combined to make higher level cards, etc. Not financial advice, but I expect the prices of these rewards cards to be at least several times higher in the future, if not many times higher. Nothing is guaranteed, though.