@costanza 72
about 2 months ago
LeoFinance

I started playing the Sorare.com NFT Football Fantasy Game sharing the things I'm learning along the way which might be helpful to those who are looking to get into it. This is part 2 making an initial deposit using that to buy my first set of players.

For a basic explanation of what the game is about, See the Previous Articles

My aim for this game is to have a fun time becoming a casual player that doesn't necessarily want to play the "Pay2Win Game" of getting a top ranking. I rather play the game of trying to scoop up cheaper players that I believe will perform better in the near to distant future in the hope to sell them for a nice profit. Since I follow the Belgian League closely anyway which is fully licensed in the game if fits well while not requiring that much time.

This honestly was quite a hassle since I was looking to just use some crypto funds. Sorare operates on a 2nd layer of Ethereum and uses ETH as a currency (which is displayed in € or $). You get the private keys of this 2nd layer so you have actual ownership of your Funds and NFTs. The average player doesn't care about it and will never really have to think about it also which is a good thing. In order to get ETH on your account, you either have to use an ETH Deposit which right now just has ridiculous fees in the range of 40$-80$ which I was unwilling to pay. Another payment option is Ramp which allows bank transfers or Credit Cards.

So I tried the next best thing which was my Crypto.com Visa Card which for some reason didn't work on the platform. (from what I've read, some cards work and others not apparently). After some hesitation, I did end up buying 75€ worth of ETH with a regular Bank Transfer as initial funds just to test it all out knowing I likely wouldn't get that far hearing how 500$+ is at least required to be somewhat competitive.

So there are 2 ways to buy Player NFTs. The first one are the auctions put up by the Sorare company and the second option is to buy from other players (managers) 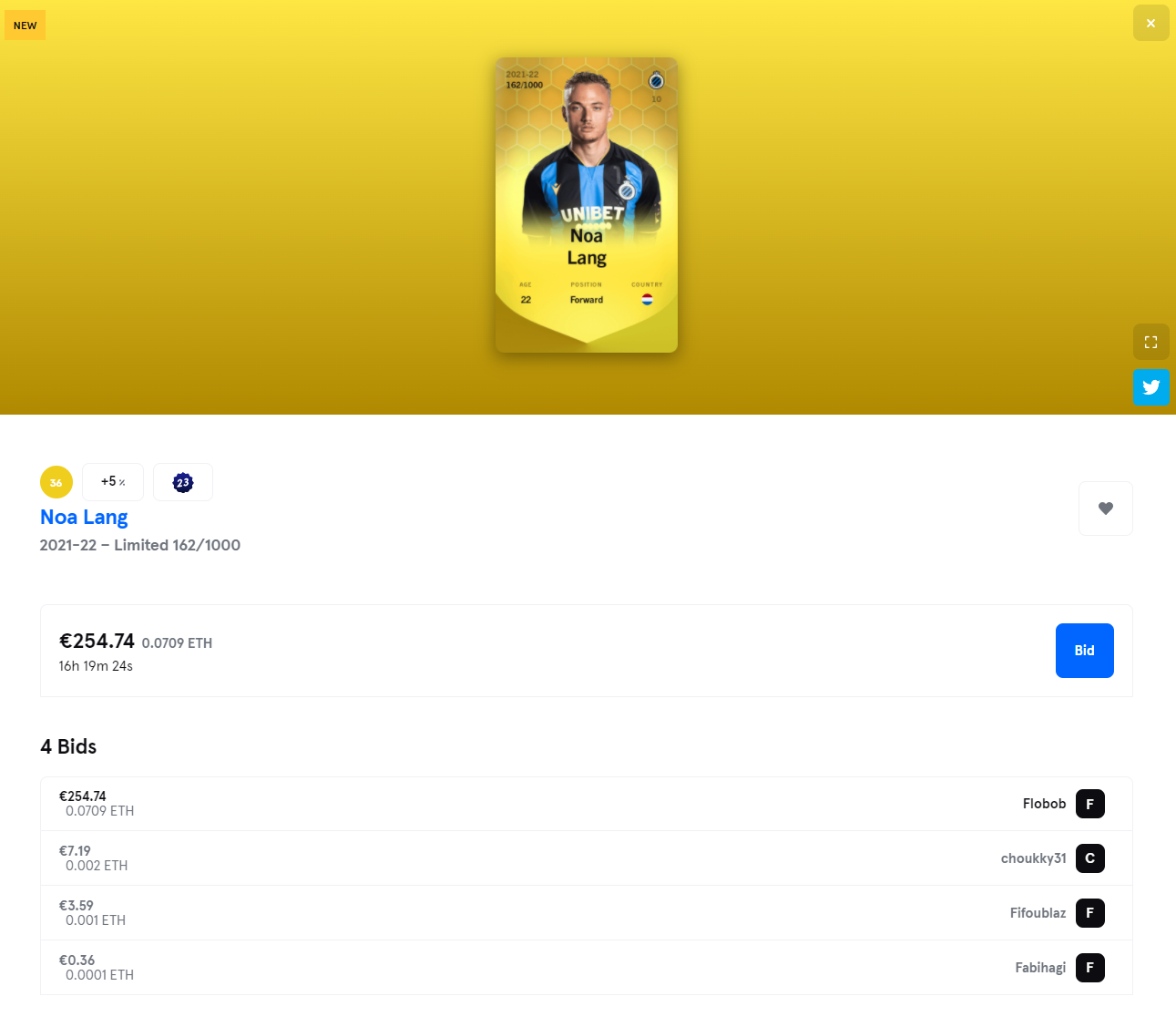 Bids are binding, so once you put them up you can't opt out and if no higher bidder comes it you will automatically buy it with the funds from your account that were put aside from it. If someone comes in making a higher bid, you instantly get the funds back in your account. 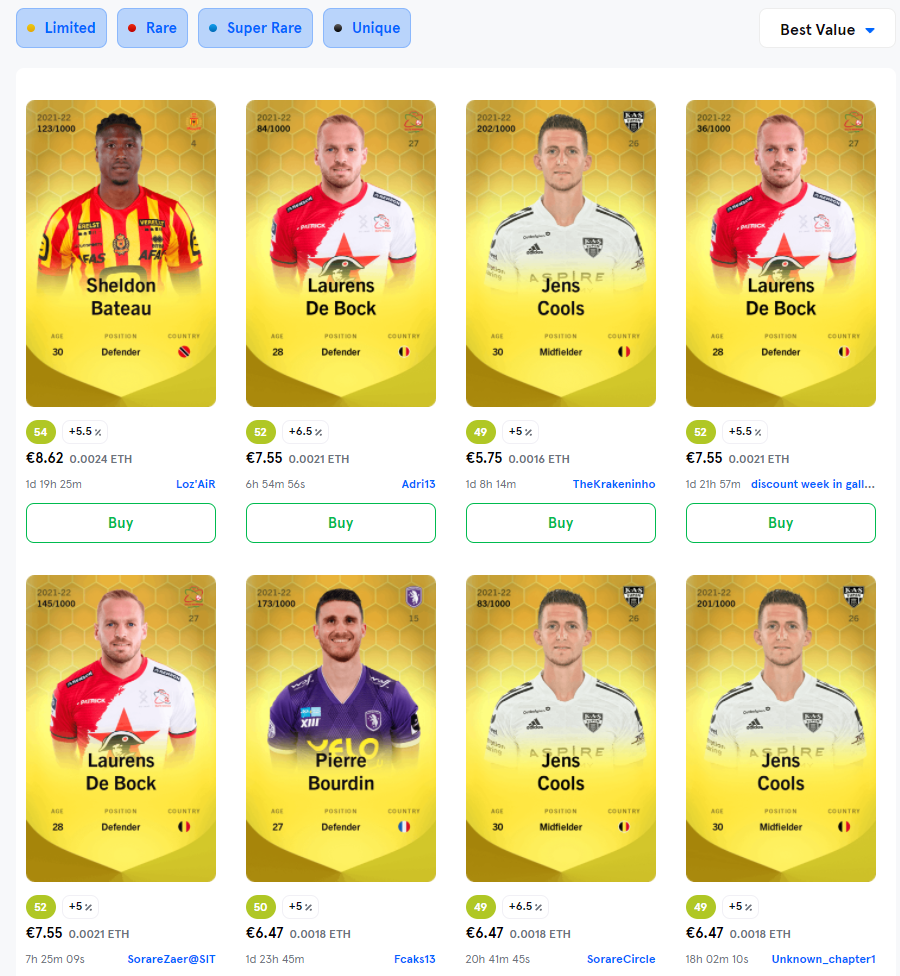 So with the New Card Auctions, you have a chance of scooping them up cheap without the risk of having to pay more than what you bid and with the Manager Sales you are able to get players cards with higher XP giving higher bonus points (which is another pay2win mechanic)

In order to submit a team in one of the Game Weeks you need at least 5 cards of which 1 Goalkeeper | 1 Defender | 1 Midfielder | 1 Striker | 1 Extra. Goalkeepers by far are the most expensive and if you want to play with a small budget you will have to buy a Second choice Goalkeeper that is quite old and is sitting on the bench. I for now just spread some of my 75€ around getting mostly players of 3.7€ with a couple of exceptions. 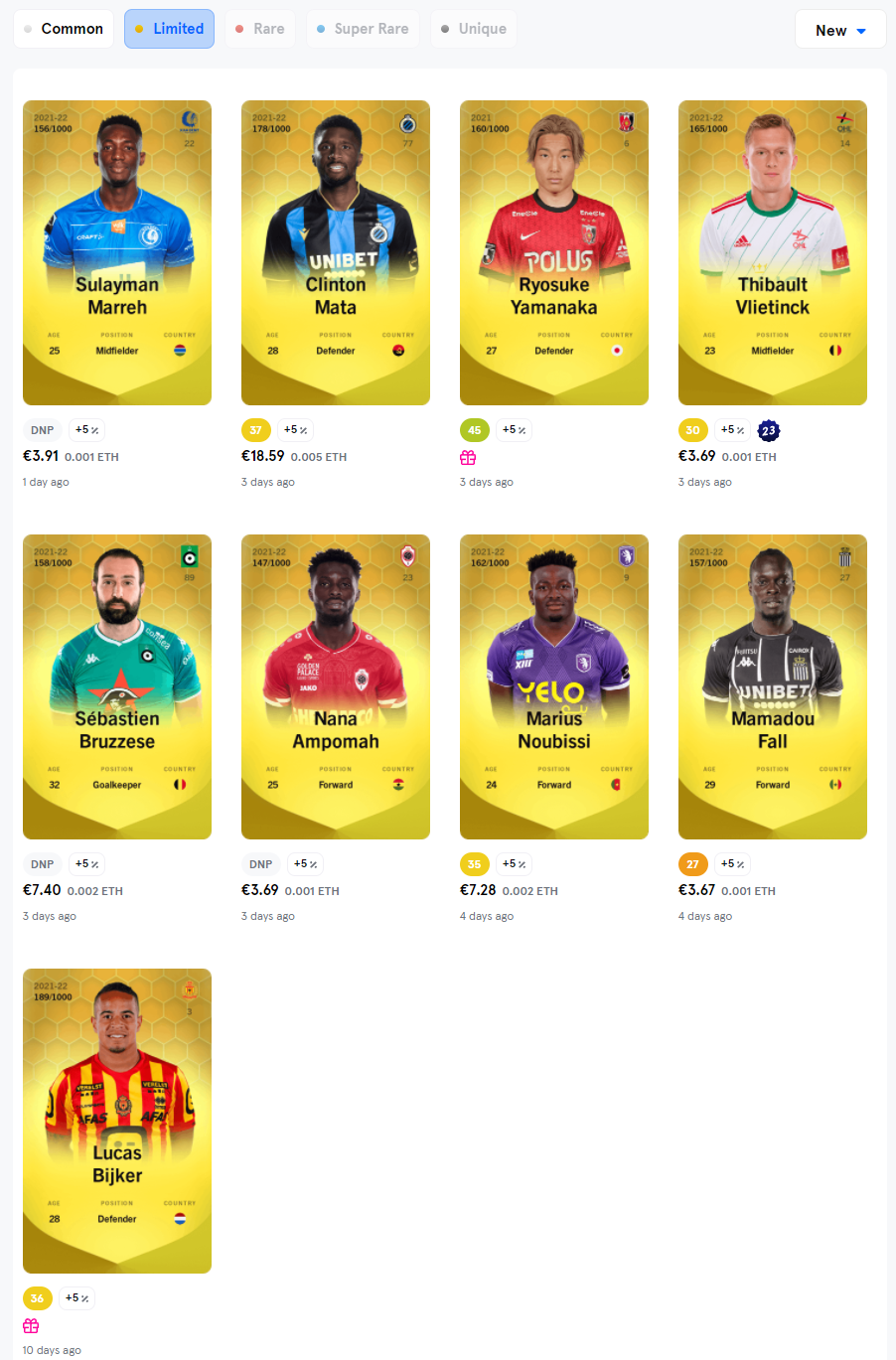 I did get 1 card from someone that used my Affiliate link (thanks) and also 1 card because I used an affiliate link myself which gives 1 free Limited card when you buy 5 cards. I haven't tried selling any of my players yet

Once you have at least 5 players you are able to join a game week entering your team which is quite straightforward. Make sure it cluck the No Game (NG) checkmark as it will show players that did not play in the previous match of their team also. Especially when you keep the budget low with a benched Goalkeeper you will need to do this or you won't see any player to select.

This is the team I entered this week in the Challenger Europe Competition which only allows certain leagues including the Belgian League. 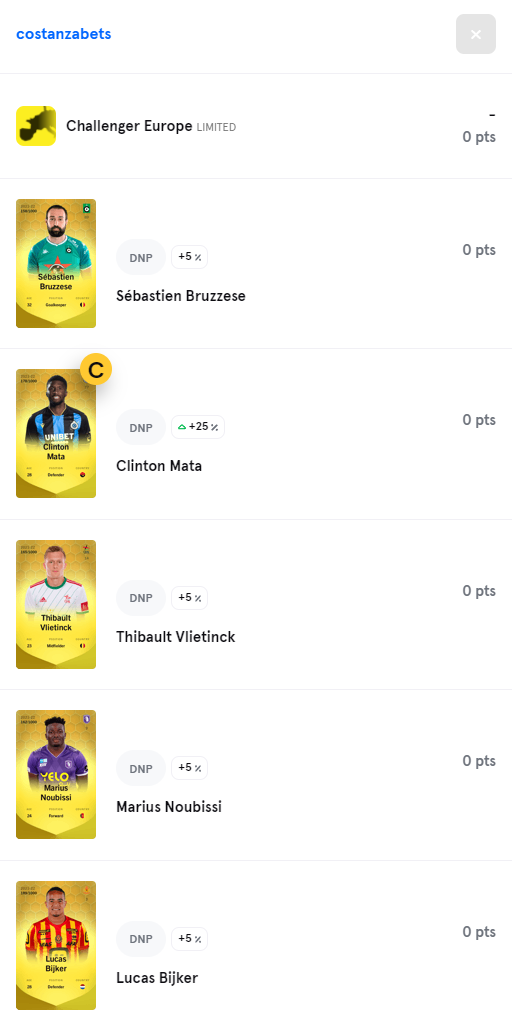 You can choose a captain who will earn more points

So far I have quite enjoyed my journey into Sorare even though not everything about the site is all that clear while it would be nice if they implemented more crypto payment options. Being part of this gives an extra dimension to following Football Leagues putting some stake behind it and I can see it becoming more popular once they really start the marketing. I don't expect this to be a big earner for me though even though I hope it will actually be profitable over time. The time requirement is also limited which is a big bonus.

Sorare always look exciting to me but I fear to step out from Hive.
I wished @rabona can add this in their game.. same NFT concept in Hive.

@costanza 72
about 2 months ago

It's hard to compare rabona with sorare :-)

Sorare has about a billion in investments and holds a ton of licenses with big plans to expand getting a lot of football fans in. I can see myself enjoying it for seasons to come as it actually blends in with the real-world football teams and player performances. Rabona I gave up on a while ago, it was fun for a couple of weeks but I kind of grew bored of it to the point that logging in and refreshing the contracts was nothing more than an obligatory task.

I would say that Sorare is pretty accessible, making an account is really easy and you can try the game with the common cards that you receive. Joining the competition or trading players I easily managed to do with 75€ (even though it doesn't get me in a competitve spot right from the start)

trying to contact you we need consultation as you have immense knowledge in sports betting dapp space, can you text via telegram @ta888x

You can always find me on Discord (My Username is costanza#2335 on SBC Discord Server. I rarely use telegram.