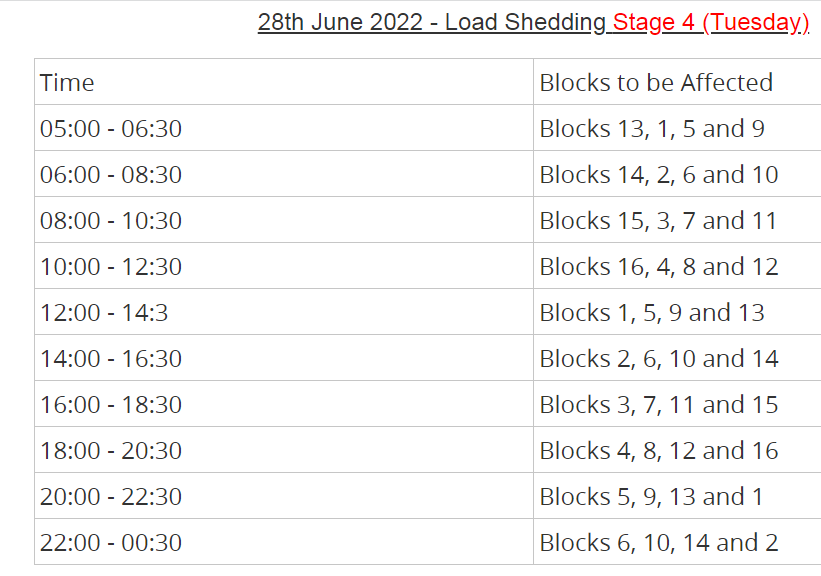 Just to give everyone an idea of how bad things have become we are block 5 and will have 3 x power outages today. This is fine if it is residential, but businesses cannot carry on like this. Stage 6 starts tonight which is far worse as times double.

The loss of revenue is reported at around $45 million per stage per day which being 3 x is $135 million per day being thrown away. The jobs being lost is well over a million and would go as far as saying it is more like 3 million jobs gone.

I spoke with my friend yesterday who has a factory up the road about 20 km from where I stay and he is seriously struggling. It is not the schedule that is causing him problems but the false alarms by not sticking to the schedule. The problem is as of this evening we go to the next level being 6 which is 4 hours instead of 150 minutes per outage.

My factory has to turn off way before as well as production is planned in advance as every time the machine loses power we have so much wastage and is not viable. Raw material at all time highs means you have to be certain for an extended run time or all the profit is in the wastage. This is not covered by anyone but you yest they don't stick to schedules so business is virtually impossible especially in manufacturing.

When you are geared up for production and have to turn off the machines so as not to damage them with power surges and then the power doesn't go off. He has to wait 20 minutes every time there is a false alarm just in case. In most cases the electricity goes off when you least expect it as they hardly ever stick to this timetable.

I know one industrial area that has load shedding twice during the day every day and has been like that for the last few months. They are not notified and most companies are adapting even though it is costing them financially. Long term this is not sustainable as we are just becoming another typical African country.

The rumor coming from the power supply company is things are expected to deteriorate further and this is the worst we have experienced so far since load shedding was introduced. We are waiting for them to switch from 3 to 4 power cuts per day which will create havoc.

Just on a small residential generator it chews through 2.5 liters of fuel an hour which has a cost of $3 per hour and does start to add up quickly.

The downtime is costing the country billions as businesses are not only losing revenue, but are doing far less. Less money being generated means less taxes and less money all round which is a losing scenario that cannot continue.r

If I was staying I would have installed Solar but as that is not part of the plan we just continue as is. This is like living a horror story and you are part of the cast as this is by no means normal and it is time to leave.

I was just saying to someone else that I can't even imagine having intermittent power outages like this all the time. It would be impossible to get anything done! I think solar would definitely be the way to go if you are hanging around long term.

No chance of doing solar unless we put it on to increase the value of the property. My mind is made up and has been for sometime and it is all about getting out. The business was keeping me here and that is in survival mode currently and could be setting something else up in the meantime elsewhere.

Best of luck to you! I know you will land on your feet even if the road is rough getting there.

I fear this to happen in Belgium too in the next few years. Our nuclear power plants are outdated and they want to replace them with gas power plants, which is just ridiculous!

Oh wow. That sounds so ridiculous in this day and age.

Yes I'm also really not enjoying the daily power cuts here in sunny South Africa. It must be awful for those of us running factories. I have no such concerns fortunately so am not pressured to emigrate but business owners must be collapsing and the overall economy of SA looks rather bad going forward at this rate.

Our factory is suffering along with others and this is not fun as the economy was already under severe strain.