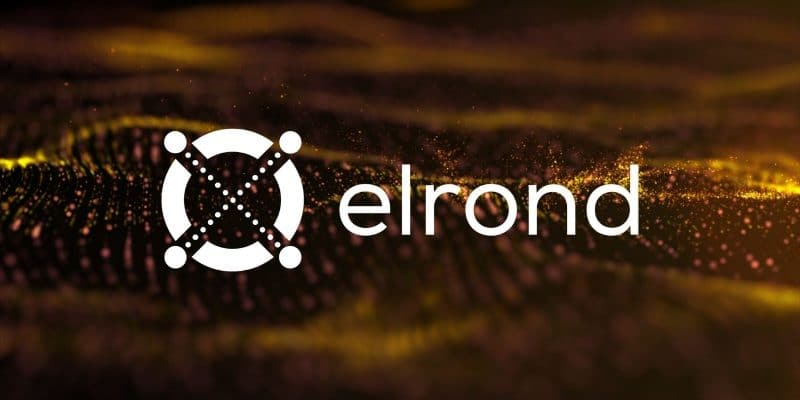 Continuing the series of analysis of smart contract platform projects, today I bring an analysis from Elrond. Like most of its competitors, it purports to be a network
scalable, fast, and secure for building dApps on a transparent, high-bandwidth, low-latency infrastructure.

Announced in 2019, Elrond is a blockchain designed for high throughput and execution speed. To deliver what it promotes, the Elrond network has two main features:

The core network was launched in July 2020 and in September 2020 the token. It was first called ERD, underwent a change and was changed to eGLD (or eGold), which in addition to becoming Elrond's native cryptocurrency (all ERC-20 and BEP-2 tokens were swapped), saw a rename of 1000 ERD for 1 eGLD. With the new economic model, the total offer of 20 billion ERD has increased to 20 million eGLD.

NETWORK STRUCTUREÉ using the Shardings technique that the Elrond network architecture is based on. This is a concept that was implemented as a method to partition databases horizontally, to seek to deliver the performance available.

Elrond chose not only to do Network Sharding and Transaction Sharding, commonly used by other networks, but to solve the most difficult one, which is State Sharding, which more efficiently fragments processes, so that each sharding processes only a fraction of the processes. transactions in parallel with other fragments.

This helps improve communication within fragments and increases network performance and efficiency.

Fragmentation works by dividing the network into subsets, or fragments, so that nodes process only a fraction of the network's transactions. This practice is also implemented in networks such as Zilliqa and Polkadot.

Once transactions are processed, the fragments transmit them to the metachain (Elrond's central blockchain) where they will be settled.

It is important to note that every 24 hours one third of the nodes that validate transactions in each fragment are reorganized into a new fragment, with the intention of avoiding collusion between validators. 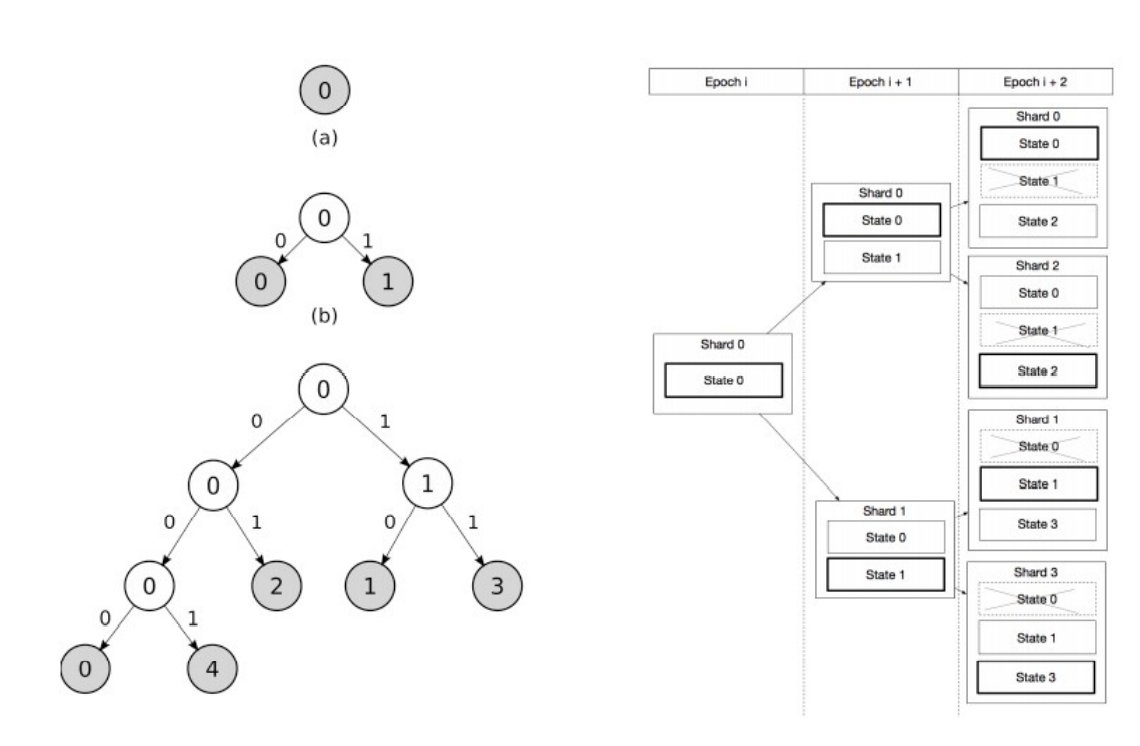 In the sPOS (Secure Proof of Participation) method proposed by Elrond, there is a combination of eligibility through staking and classification with random validator selection and an ideal size for the consensus group.

This Byzantine Fault Tolerance (BFT) consensus protocol maintains a high level of security through random sampling of the consensus group and random reorganization of nodes into other fragments.

The chances of the nodes being in the same consensus group are very low, which reduces the possibility of coordinated attacks.

Metachain is a blockchain that runs on a special shard, where the main responsibilities are not transaction processing, but finalizing the block headers of processed shards, facilitating communication between shards, storing and maintaining a register of validators. 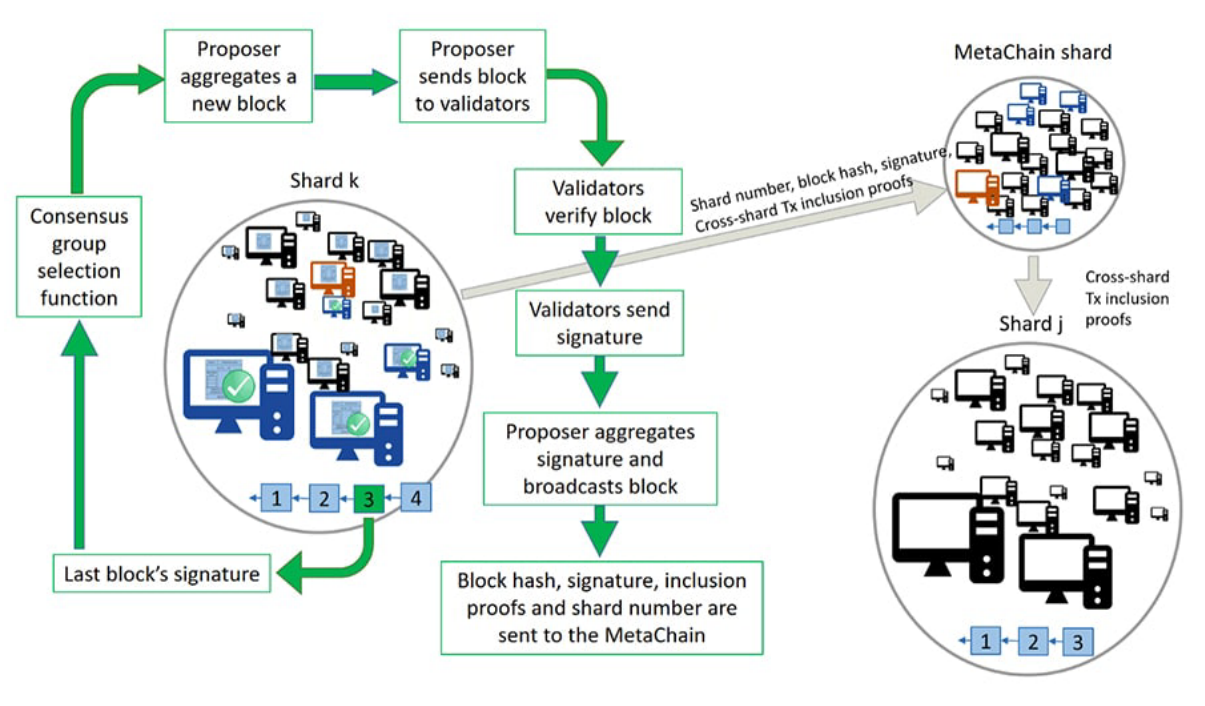 Elrond's website further states that, according to recent testnet results, the network's Adaptive State Sharding allows up to 260,000 TPS.

Elrond's key team members and co-founders include Beniamin Mincu CEO, Lucian Todea, COO and Lucian Mincu, CIO. They have been in the blockchain and cryptoactive segment since 2013.

As of June 2021, the Elrond team consisted of 27 developers, designers and engineers from Intel, Microsoft, ITNT and Soft32. It also contains seven consultants who have come from major companies such as Google, NASA, Ethereum and experts from George Mason University in addition to the University of Illinois.

The union of PhDs, math Olympiad champions, and even a former member of the NEM core team is a positive point, in terms of intellectual capital working in the development of the project. 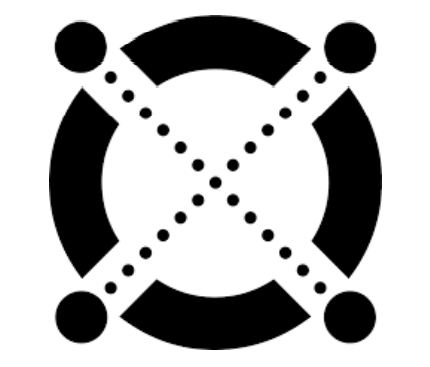 The EGLD token (“Electronic Gold”) is the native currency of the Elrond network. It can be used as a means of exchange between users and developers, who take fees as payment for services rendered, and between validators, who receive rewards for
validations performed.

Currently, the amount required for staking is 2500 EGLDs. Furthermore, it is also used in the governance mechanism. 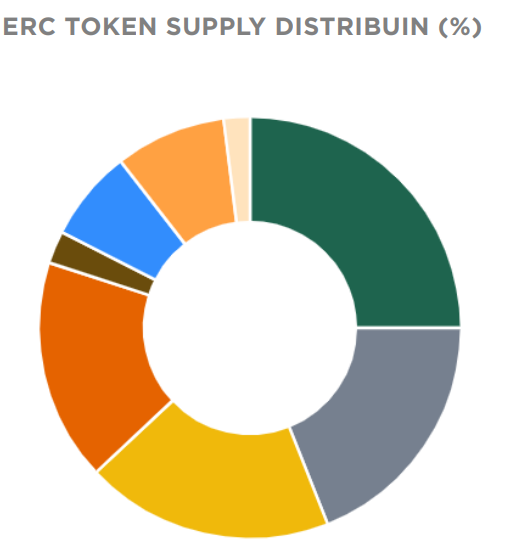 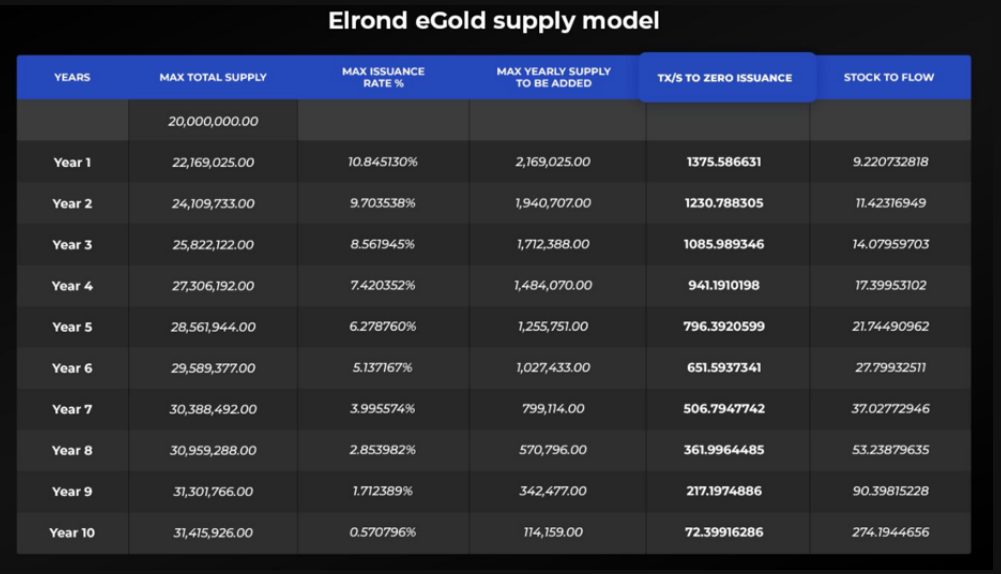 Another interesting point is that each transaction on the Elrond Network reduces inflation and ensures that the EGLD never reaches its theoretical supply of 31.4 million.

This is because as adoption increases, the volume of network fees that are collected replaces the creation of new EGLDs, which can align incentives and drive token adoption. 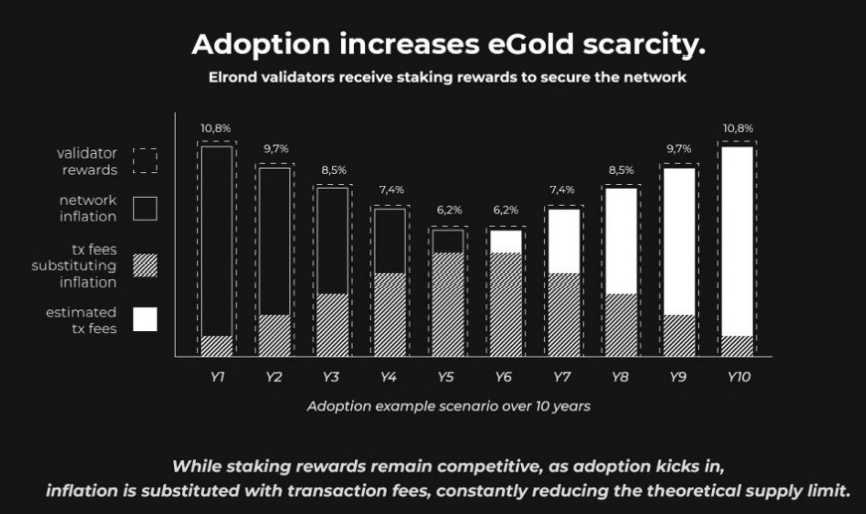 Elrond's network has strong developer activity, with more than 22,000 commits on GitHub.

At the moment, Elrond Network (the company that built the protocol) manages protocol enhancements and updates. Network participants and validators can contribute any changes or proposals, since the code base is open source.

The transition of the Elrond network to an off-chain governance model, whereby EGLD token holders can vote on improvement proposals and determine the future direction of the network, is under development.

The Elrond Virtual Machine is a dedicated intelligent contract execution engine, built on WebAssembly (WASM) that
can support the creation and execution of decentralized applications (dApps).

It expands the family of languages available to smart contract developers, including Rust, C/C++, C#, Typescript.

Developers can write smart contracts in any language they are familiar with, compile them into WASM, and easily debug their human-readable WAT format.

Elrond's team created the Maiar Money Wallet App, with the aim of promoting safe and simple access to the world of cryptoactives. 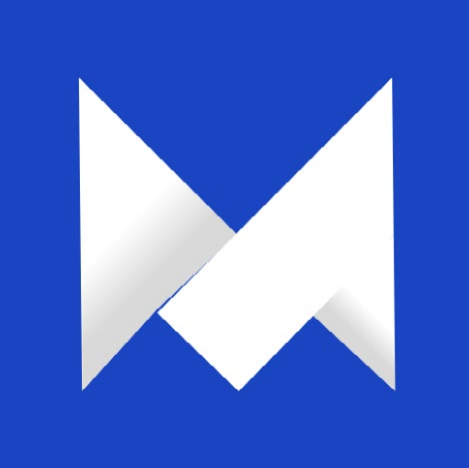 The idea is to provide a user friendly tool that is easy for anyone to use. The Maiar Wallet aims to make sending money as simple as sending a text message, without the need to use long cryptographic keys of public addresses.

Through it, users can purchase EGLD tokens straight from their wallet using over 150 different fiat currencies.

The EGLD token is currently priced at $247, with a market capitalization of $4.91 billion. 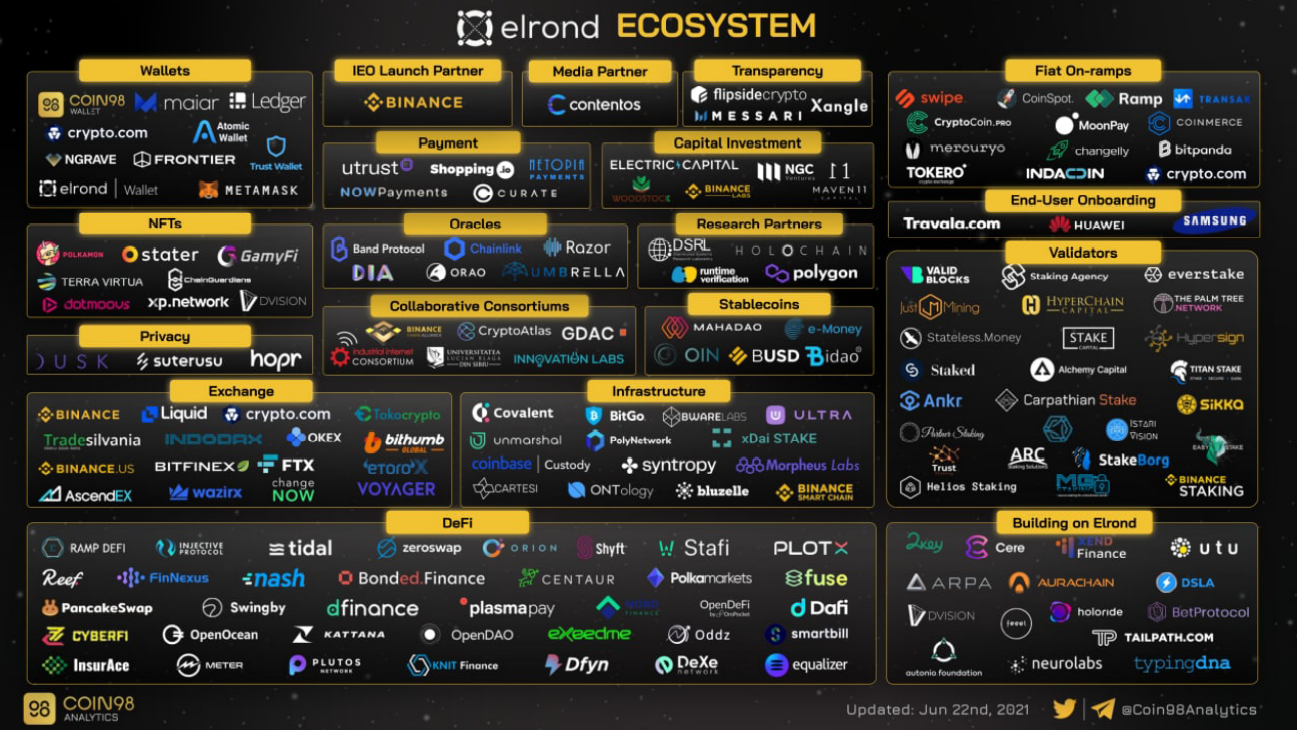 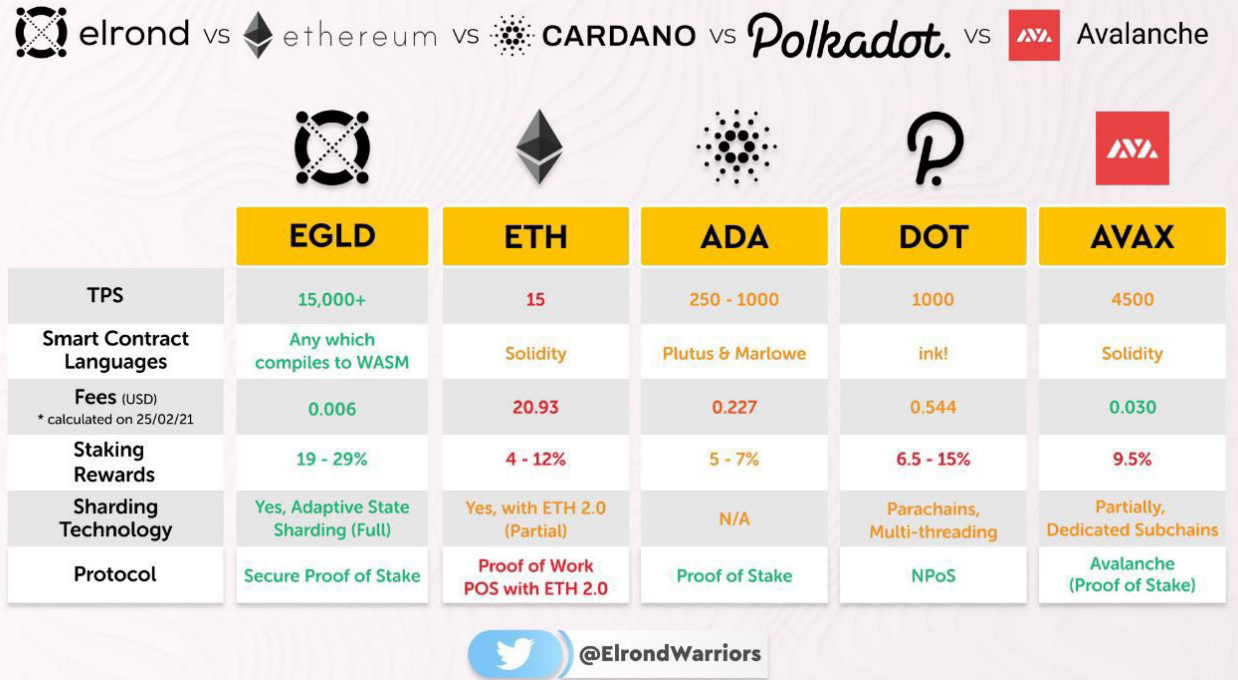 The fight in the platform space for smart contracts gets more and more fierce, as more projects emerge, with new and better features.

However, whether it will be the first ones or the ones that come later that will be better positioned to capture greater adoption, we will only know in the next few years, when they prove themselves technically and in the relationship with the public.

Another crucial point to observe is whether they will actually be able to deliver what they propose, without compromising decentralization and security.