Miners and the Moment of the Market 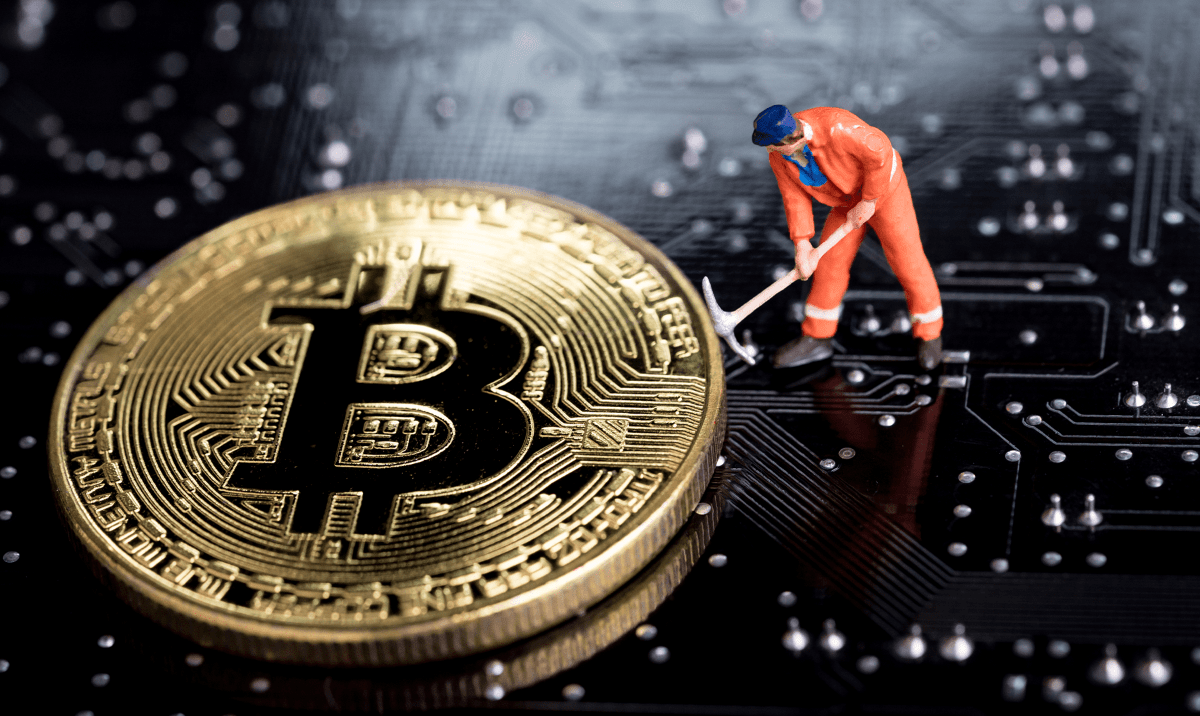 Over the past few weeks, the stress in the crypto market has had significant impacts on asset prices and protocol volume, as well as halving the total crypto market cap.

BTC, being the main asset, played its role as a driver of trends, but it did not pass through the troubled scenario unscathed and one of the elements that make up its decentralized structure, the miners, had to adjust to ensure the operationalization of their businesses.

Today we are going to talk about how the context has affected indicators related to the mining process and what they can indicate about the coming months of the market.

In the midst of the stress scenario established in recent months, as a result of numerous intra and extra crypto market elements, Bitcoin reached levels of lows not seen for a long time, strengthening a massive sell-off.

A direct result of the BTC price drop since the beginning of the year, total miner revenue (comprised of fees paid + mining rewards) has dropped from $50M to $20M and has dropped by 79% in the last 9 months.

Bitcoin Hashprice is a mining metric that represents the miner's revenue per terahash. It is the average value – in fiat currency – of the daily rewards that a miner receives for each terahash (USD/TH/s per day) calculation performed.

This indicator dropped to a low of 1.5 years, which indicates the difficult life of miners at this stage of the market cycle. 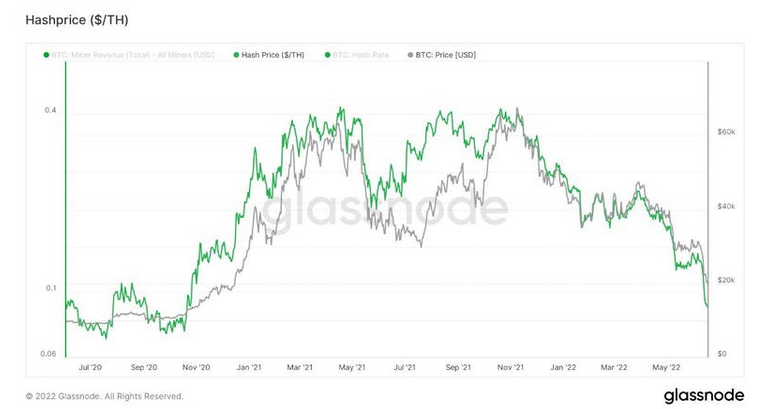 Arcane data shows that Bitcoin mining companies listed on the exchange sold 100% of their BTC production in May, compared to the usual 20-40%.

In the first four months of 2022, these miners sold 30% of their production, which increased 3 times in May and is expected to increase further in June due to current market conditions.

Of these, publicly listed miners hold 46,000 BTC, which makes them one of the biggest whales on the market and so there is a strong possibility that their sales could push the price even lower.

Earlier this month, for example, Canadian miner Bitfarms Ltd. sold 3,000 Bitcoins for $62 million, following in the footsteps of Riot Blockchain Inc., which began selling its holdings in April.

Throughout the months of May and June, the sales picture of Bitcoins held by miners was rescaling as prices fell and profit margins decreased. 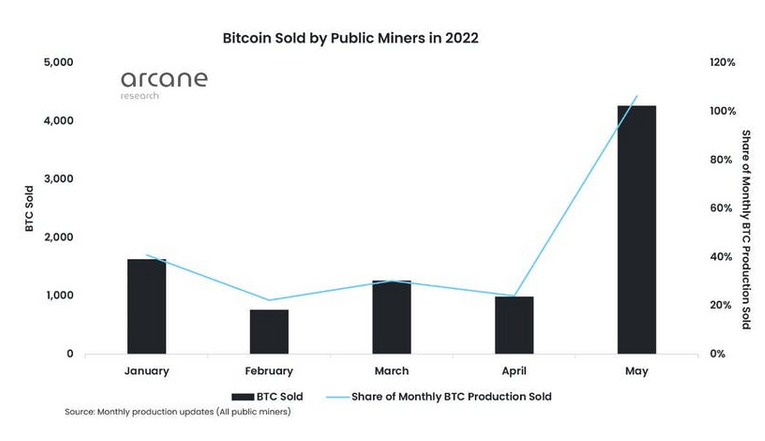 Bitcoin entry of miners on exchanges

The condition only worsened in June, with the price of Bitcoin falling below its 2017 high of $20,000 and recording a new 4-year low of $17,783. Miner's to exchange flow, a data metric that shows the volume of BTC sent by miners to exchanges, hit a new record, reaching a level not seen since January 2021 - 10,000 BTCs. 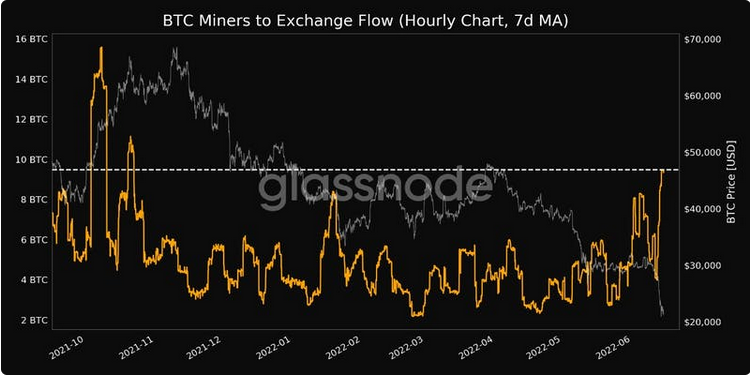 Capitulation is the term used when investors give up and sell their assets at a loss.
To track the capitulation of miners, it is very useful to consult these two indicators below, which measure the convergence between income (Puell multiple) and hashrate drop (difficulty ribbon compression).

Periods of capitulation have historically tended to precede price reversals, as they are often marked by market panic. Selling pressure at these times goes beyond normal levels, pushing the asset into oversold conditions. 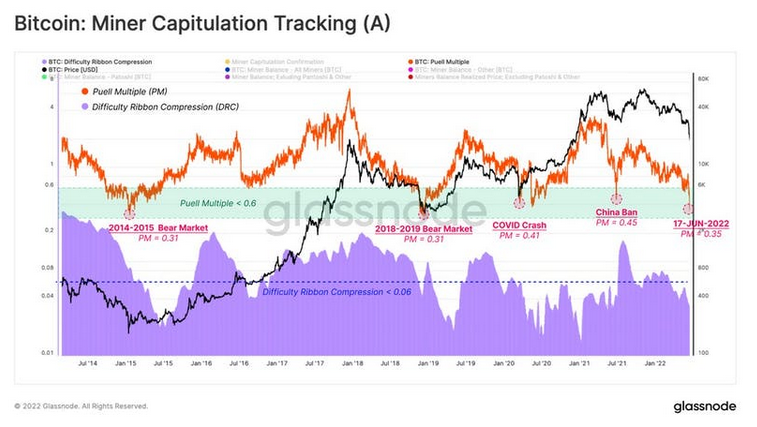 The Bitcoin Hash Ribbon indicator (which attempts to identify periods when BTC miners are in danger and may capitulate) has crossed over, indicating that many miners are unplugging their machines due to lack of profitability. The decline in the price of BTC has also made many mining machines unprofitable, forcing miners to leave the cryptocurrency market. 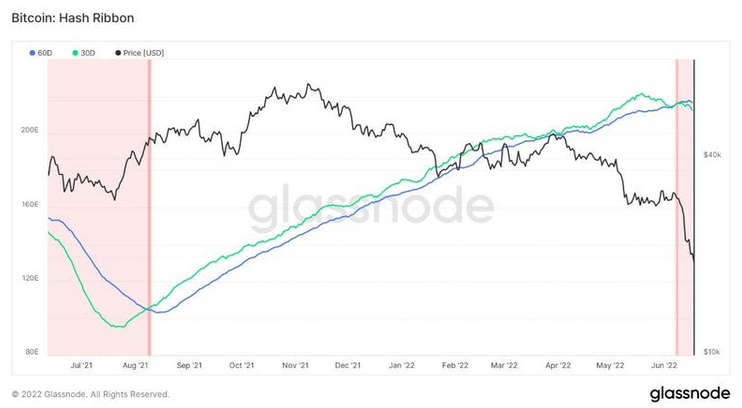 Machines Shut Down in Texas

The heat wave in the northern hemisphere forced almost all miners to shut down their machines. A continuity of activity could lead to greater consumption and overload the electrical grid in the US state. Texas has become one of the largest mining centers in the world due to lower energy costs and friendly regulation. Miners like Riot Blockchain, Argo Blockchain and Core Scientific, which operate millions of computers, have migrated to Texas. 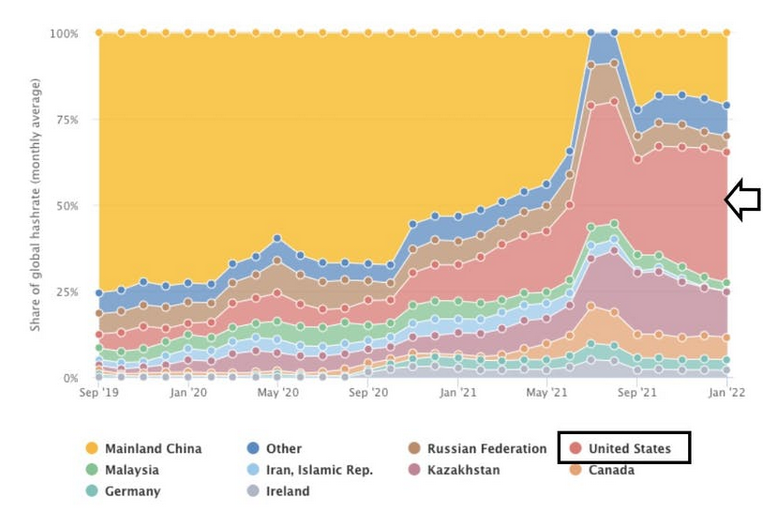 Despite the challenging environment, some of the top Bitcoin miners remain, for now, well positioned to survive a prolonged Bear Market, with revenues, albeit shrunken, able to sustain the operating costs of mining facilities. That is, presenting a stable relationship between revenue and operating cost. 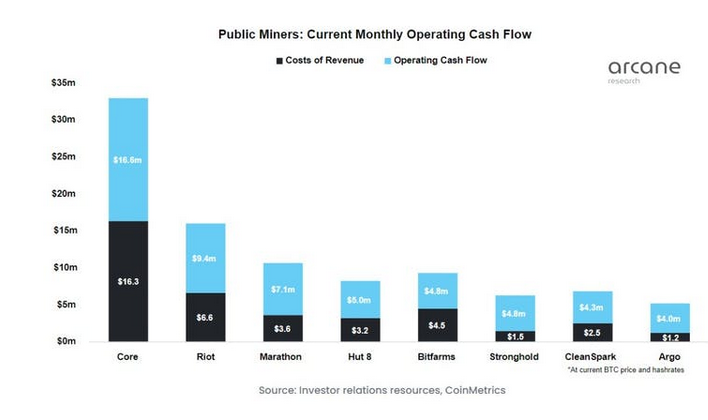 One interesting thing to note is that a major capitulation event, in which Bitcoin miners start to part with their BTCs, could signal an approach to a market bottom if the pattern repeats.

The history of the Bitcoin market cycle shows us that it is very important to closely monitor the activities of miners.

Thanks for using some links but a lot more could be done to really optimize this article.

I was trying to use as much as possible, but it was 1 am here, and I was to fall asleep, and today I woke up very early.

I will try to improve the use of links in subsequent posts.

I posted some contributions to @leoglossary, but I don't know if this is the correct way to try to help to grow the glossary.