BSC VS Polygon | Is Polygon Gaining On BSC?

As we have seen from the Polygon/Matic data, the chain has been grow a lot in the last two months. BSC has started its grow a bit earlier somewhere from January 2021, and has grown a lot in the period. Polygon seems to be gaining a lot of traction now, with a lot of projects building their Polygon version as well.

Is Polygon gaining now on BSC? What is the trend? Can we expect Polygon to overtake BSC at some point in the future?

Let's take a look at the data. 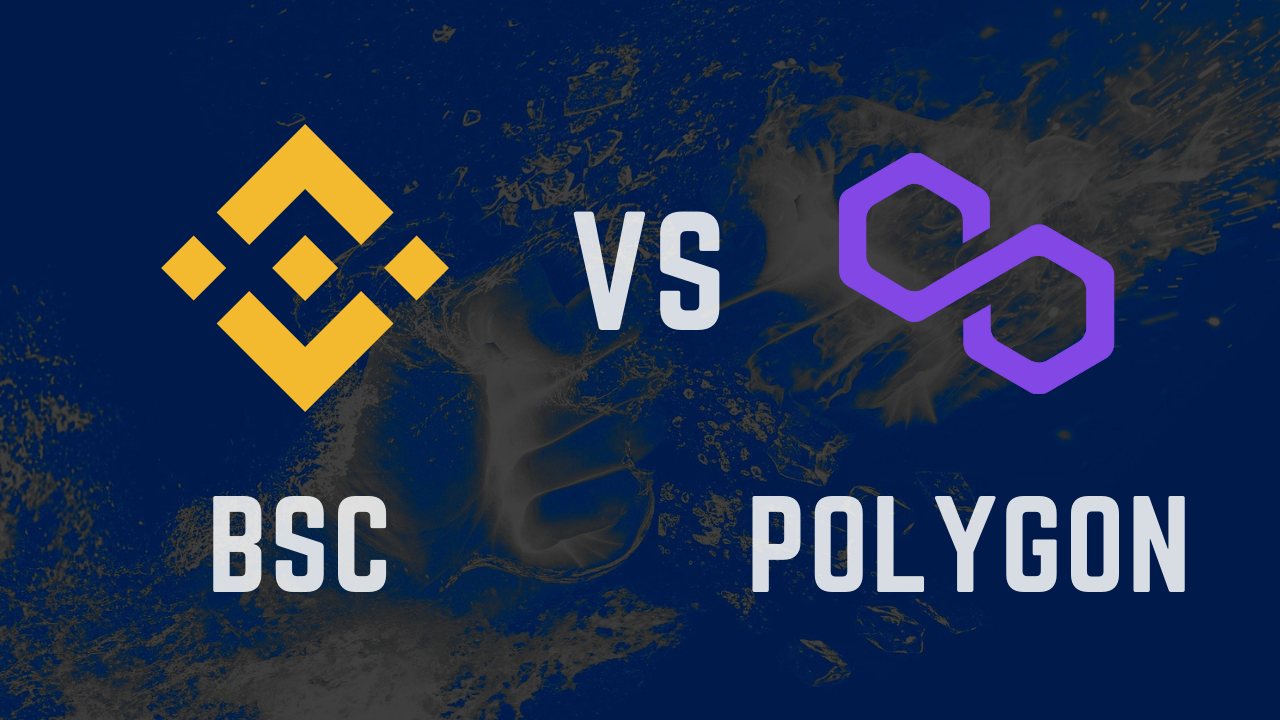 Both BSC and Polygon are ETH compatible, and they have been taking advantage on the high fees on Ethereum. Polygon fees are extremely low, in the sub one cent area. BSC has a bit higher fees, but still under one dollar.

The period that we are looking into is from the beginning of 2021, with a close lookup on the last month. 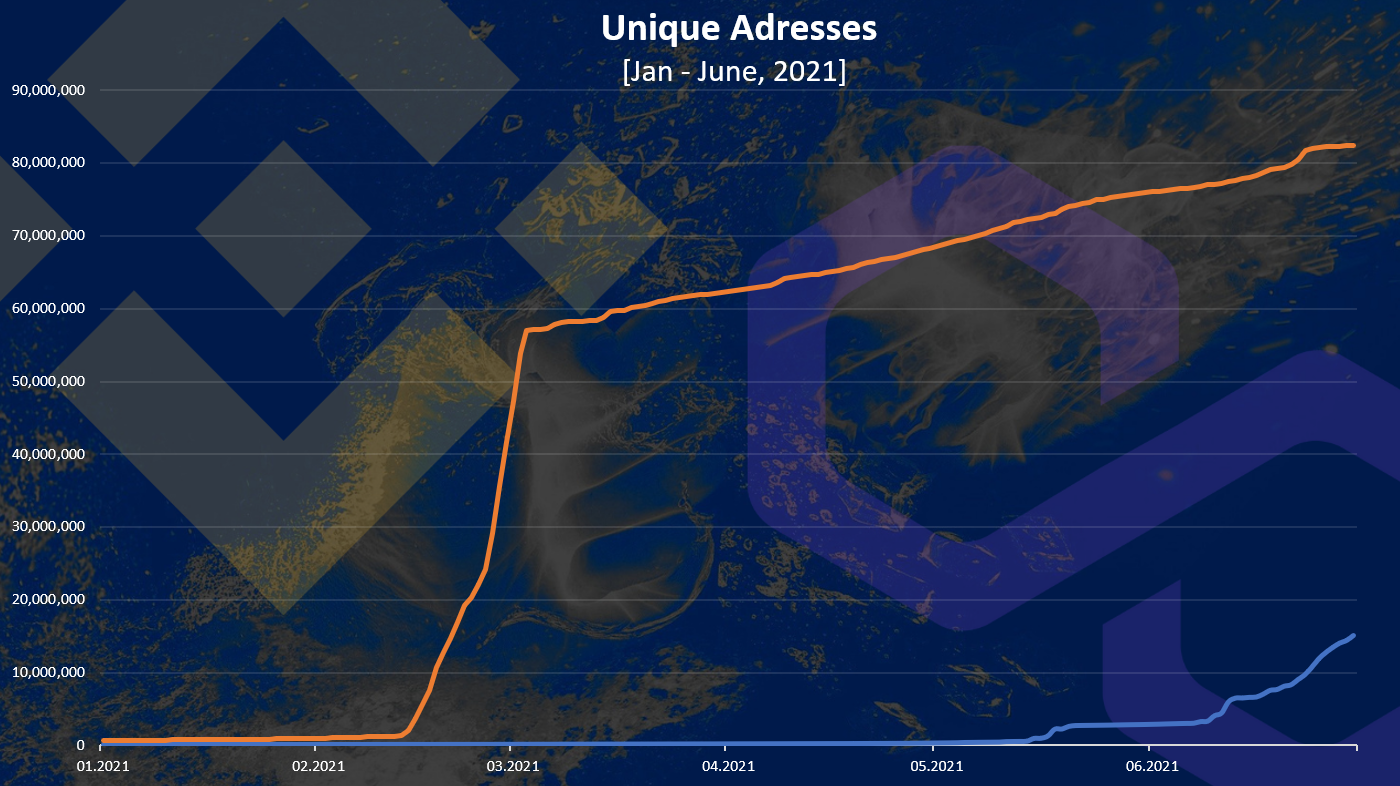 The orange line is BSC and the blue is Polygon.

As we can see BSC had an explosive growth in February 2021, and a steady increase since then.
Polygon started getting more wallets a bit later in May 2021 and the growth has continued in June as well.

Overall BSC is still far ahead in terms of wallets, with more than 80M, while Polygon is at around 16M now. What is interesting is that Polygon is growing faster than BSC in the last month.

What’s more interesting in times like this is how many wallets are transacting. How many of those addresses are actually active? 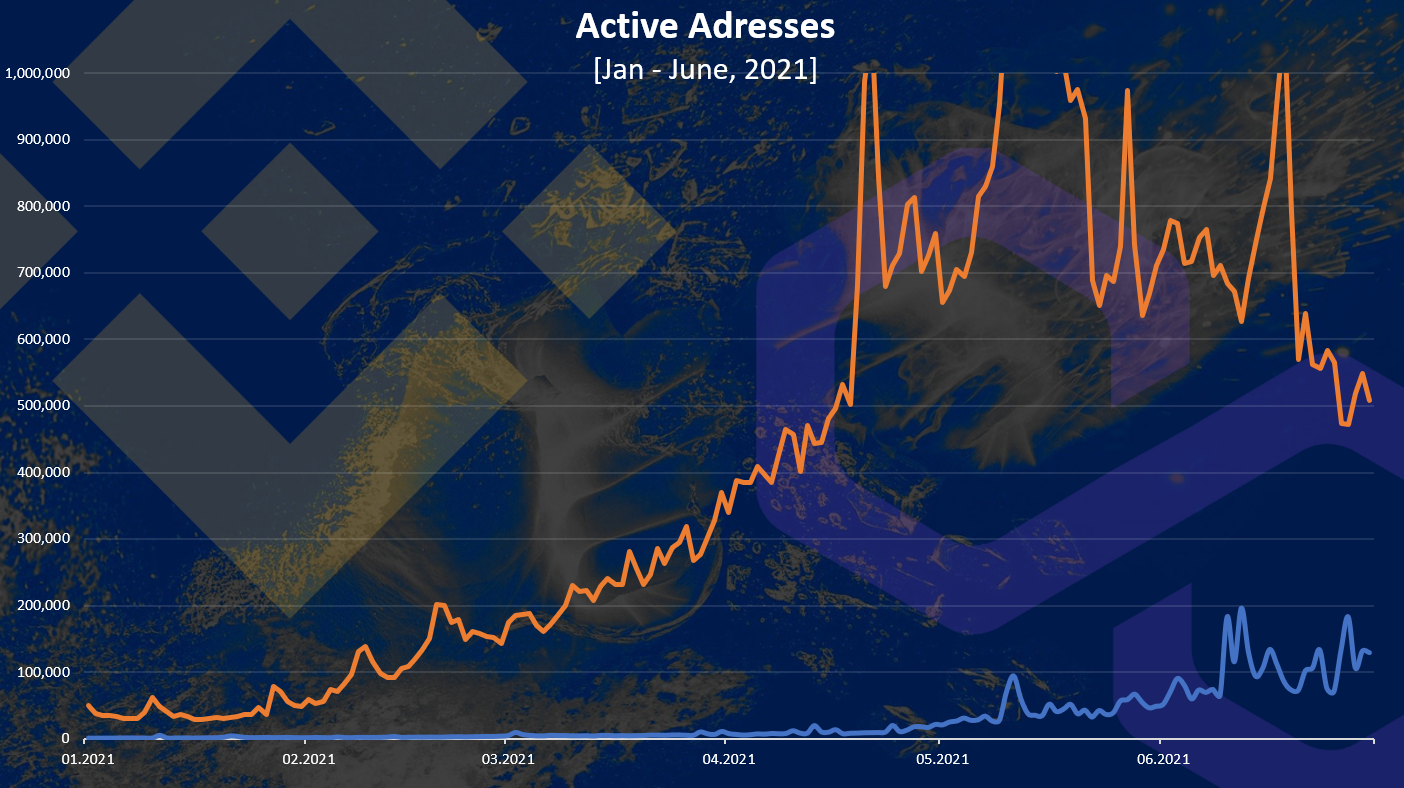 Polygon has started increasing in active wallets in May and has been growing in June as well. At the moment it is in the range of 100k to 200k active daily wallets. 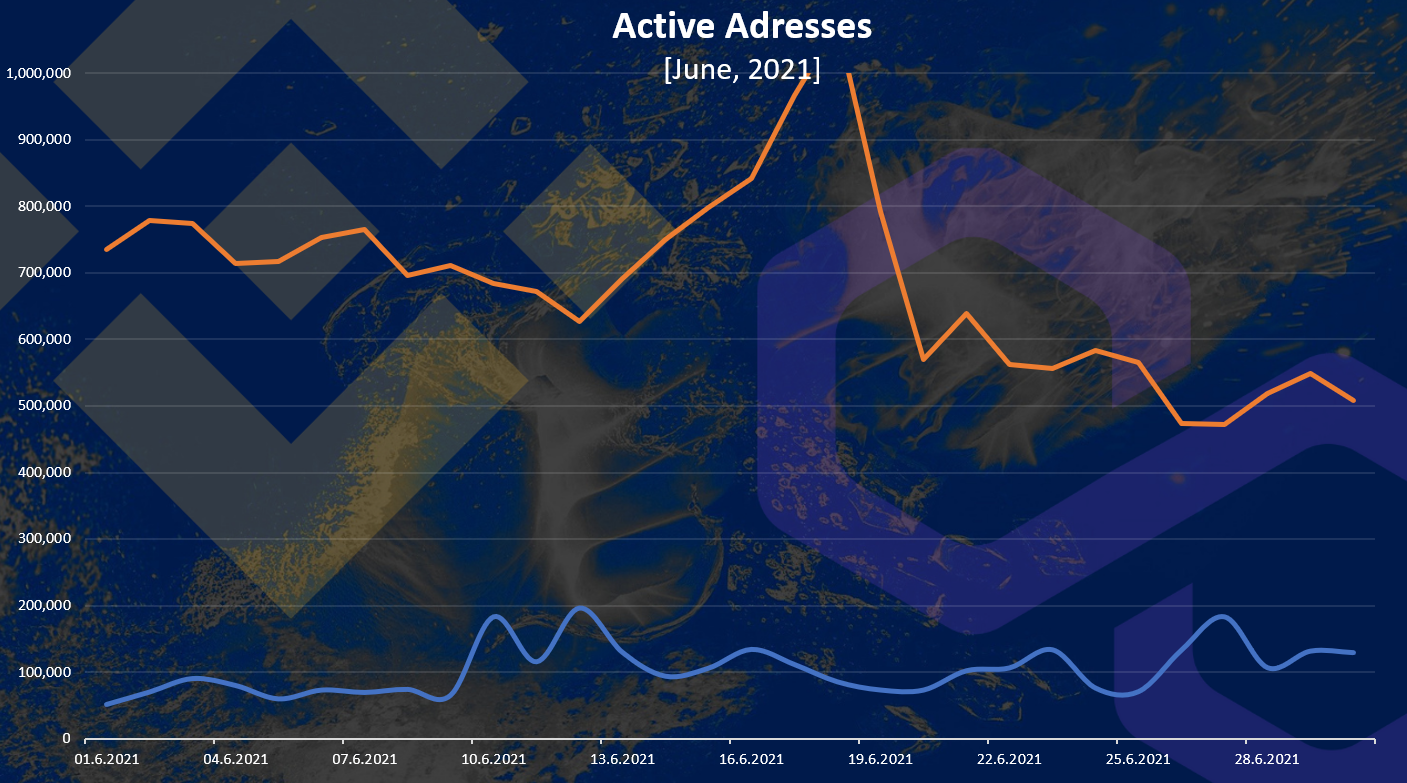 The activity on the networks is mostly represented by the number of daily transactions. Here is the chart. 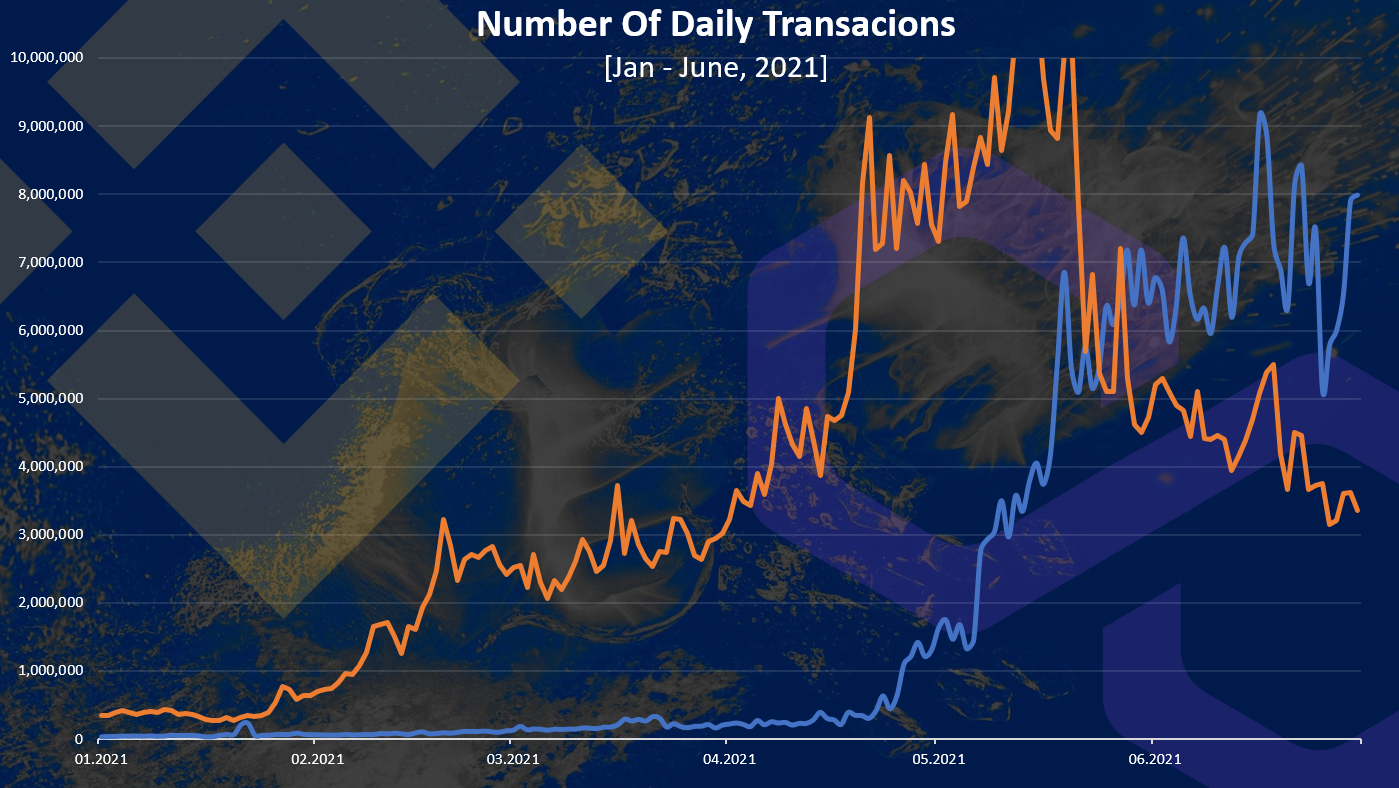 Polygon is known for its very low fees, that has been the lowest in the industry to under one cent, lower than BSC. Here is the chart. 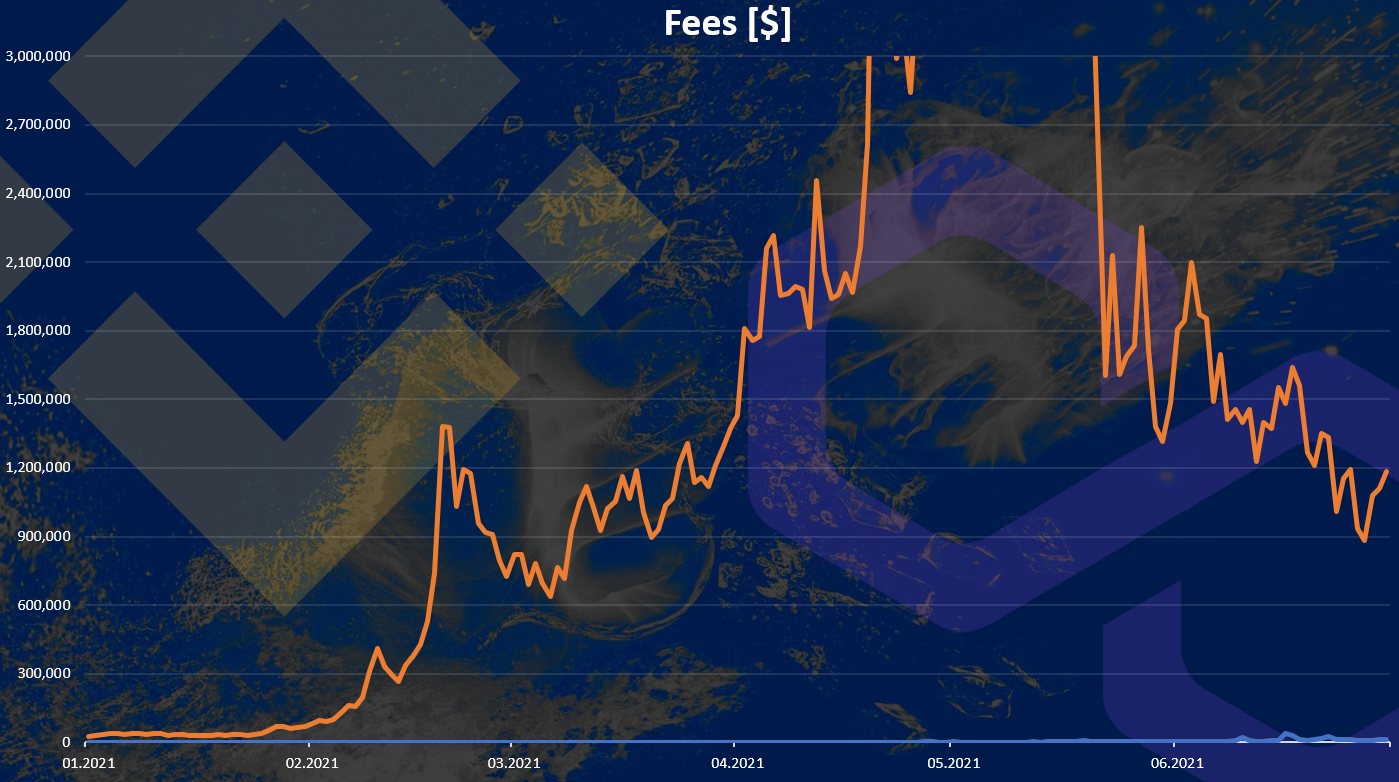 The fees are in dollar terms, cumulative for the day.
The Polygon line is almost nonvisible on the chart. The BSC network have reached more than 3M in fees per day when the prices were high. At the moment the fees on the BSC networks are still more than 1M, while on Polygon they are in the range of 10k to 20k USD per day (almost nonexistent). It really makes you wonder who will run Polygon nodes. With fees like this the only incentive is for large stakeholders who are looking for capital gains.

Polygon and BSC are smart contract platform so here is the chart for verified contracts per day. 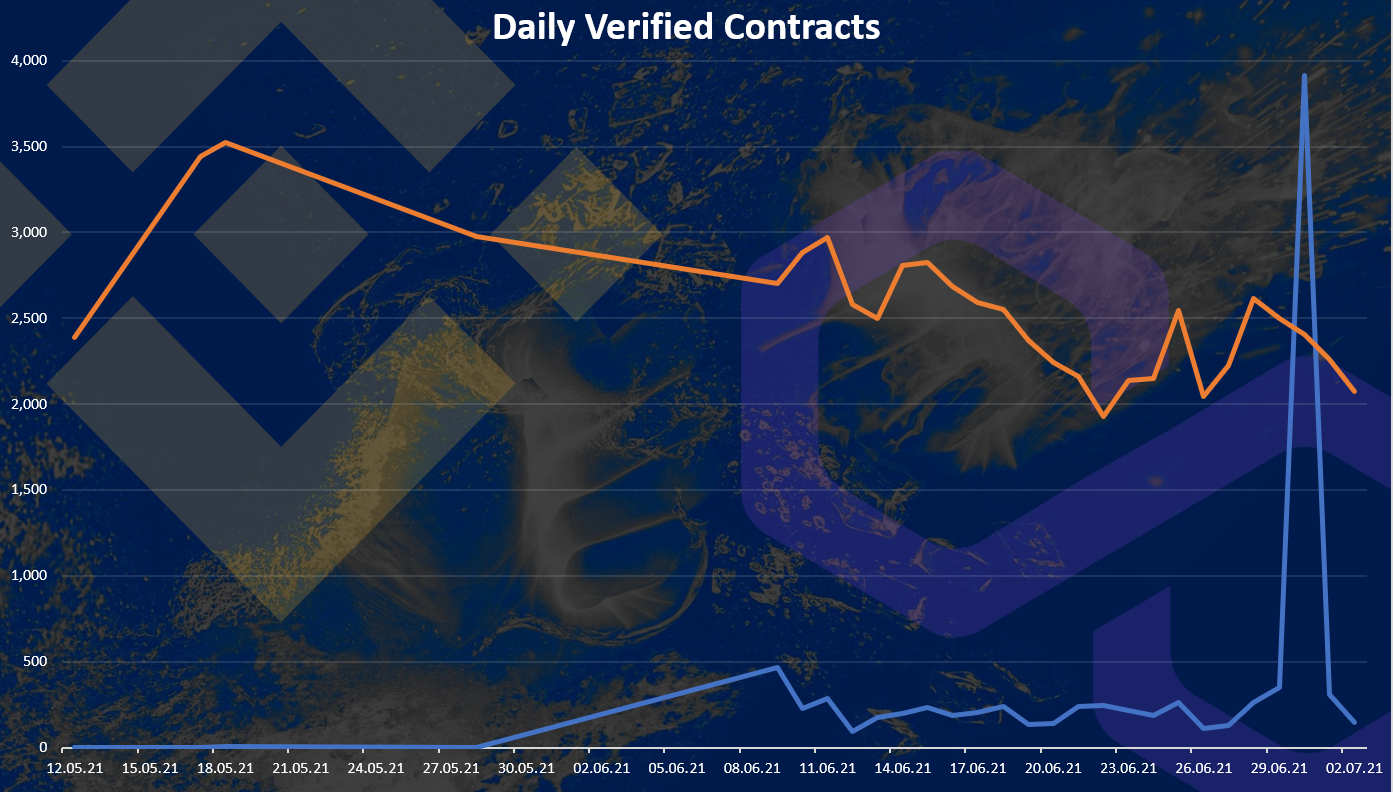 In terms of smart contracts BSC is leading by a lot, with more than 2k at the end of June, while Polygon has a few hundreds.

Overall BSC is still in the lead by all metrics except by the number of transactions where Polygon has the lead, mainly because of the extremely low, almost nonexistent fees.
But while the BSC metrics have been in decline in June, mainly because of the low prices, Polygon data is showing an uptrend. Will this mean that at some point in the future Polygon can overtake BSC? Everything is possible in crypto, and it will be interesting to see how these both network perform in the next three to six months. At the end a note that we are still very early in the crypto industry so probably there is a lot room for growth for both of these networks and much more.

We are going to see that by the end of this third quarter polygon will possibly surpass BSC, as it has been growing at a very steady and fast pace.

So if Leofinance were to finally launch the project with polygon, there would be many interested parties.

It will be interesting to watch this ...

wow, thanks for sharing, really interesting

Users genuinely love those low fees. If we could bring Ethereum Smart Contracts to HIVE with out zero fee transactions, HIVE will have massive gains. At least we should eventually see some growth from @dlux-io and https://tribaldex.com

Yea things like that will come around .... i know klye had some plans as well

"It really makes you wonder who will run Polygon nodes. With fees like this the only incentive is for large stakeholders who are looking for capital gains."

Are you aware that on Hive (and steem, and EOS, and other blockchains too) there are NO FEES AT ALL (as in "zero transaction fees")? I do hope you are aware ... Does it seem like there has been a problem finding willing witnesses on any of these systems ?

The best blockchains are feeless.

Yes, Hive, Eos ... etc are feeless, but witness/block produsers recive a share of the Hive inflation .... probably their is some other mechanics that rewards nodes on Polygon o top of the fees

When there are no tx fees, "miners" / "witnesses" / "block producers" have no incentives to play with tx ordering so you minimize the risk of MEV, sandwiching and other shenanigans

Nice write up about the comparisons in the 2 platforms. We have built an easy to create smart contract/NFT platform that utilizes both chains, BSC and Polygon, also xDai, which is extremely overlooked IMO, as well as ETH. Polygon is definitely fast and cheap, but in our experience, we had issues trying to find a good bridge to get from the ERC20 version of MATIC to the actual network. Once that gets better, I think Polygon will take off even more.

Reblogging for the https://coin-logic.com audience on the front page rotating feed!