Splinterlands has literally exploded in the last month! All numbers are up.
Let’s take a look at the latest data. 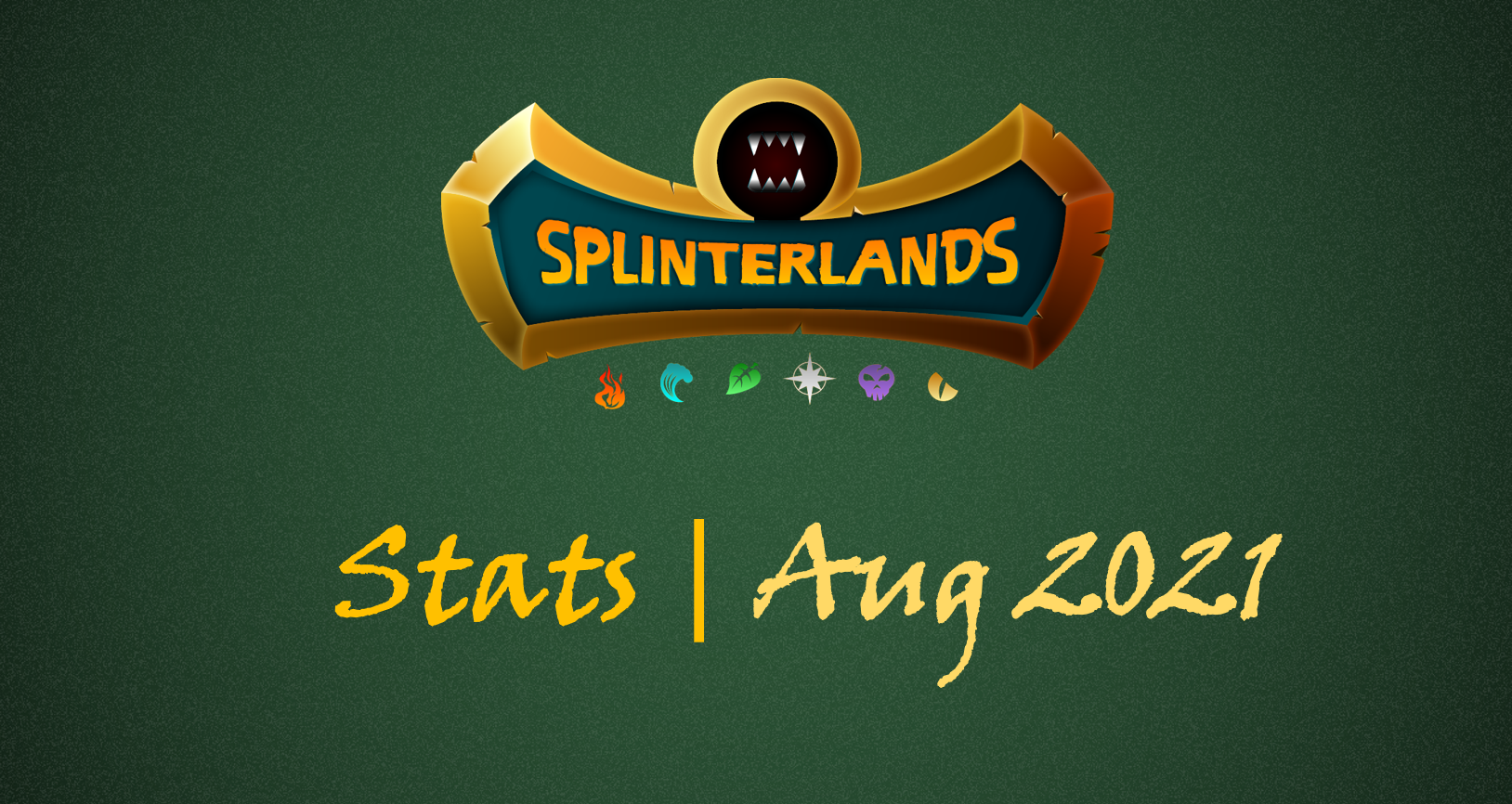 One of the main things that is driving the Splinterlands exploding growth seems to be the SPS token, but also the overall trend in NFT gaming. Building for a three years also helps 😊.

Here is the chart of the daily numbers of games played for the period. 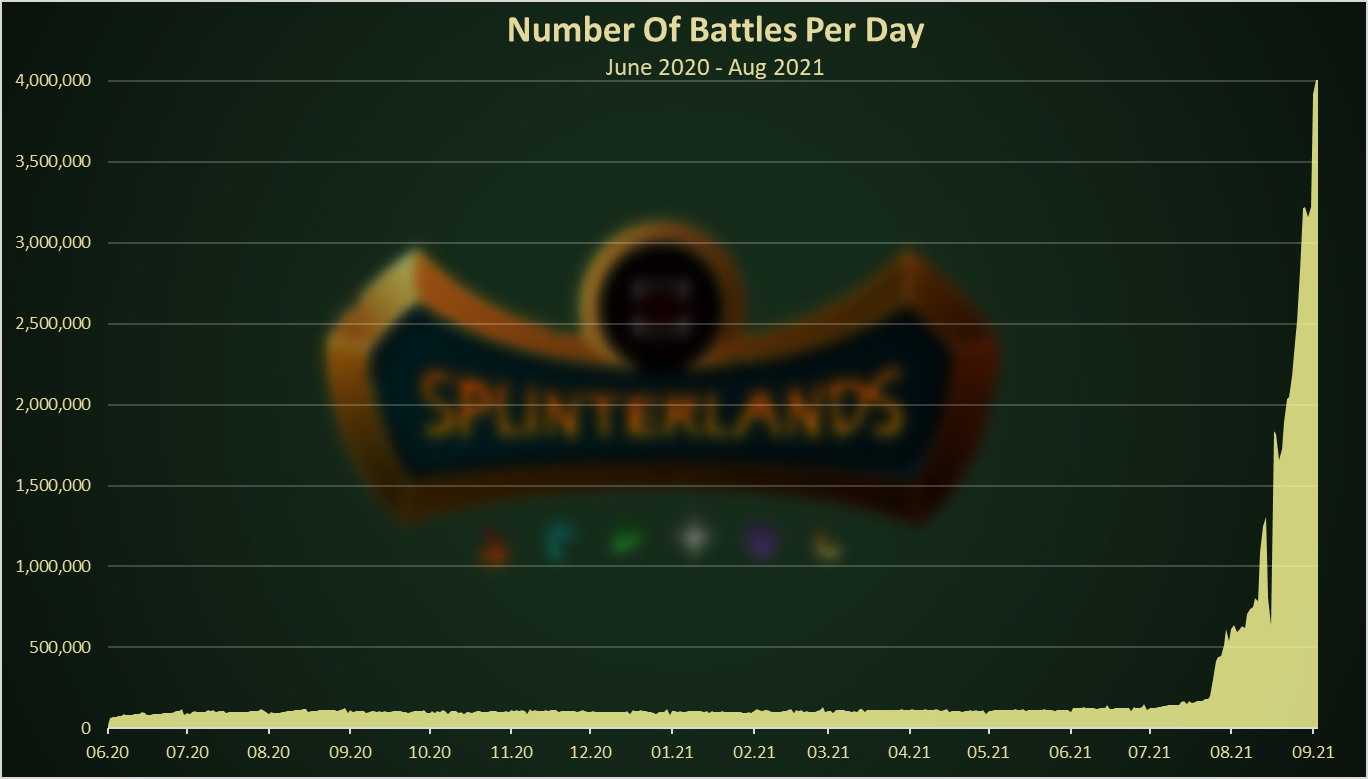 The growth in the numbers of battles is so big the numbers before a month are almost not visible! Till recently there was around 100k to 150k battles per day and in the last days there is more than 4M battles per day. This is x30 for the battles. 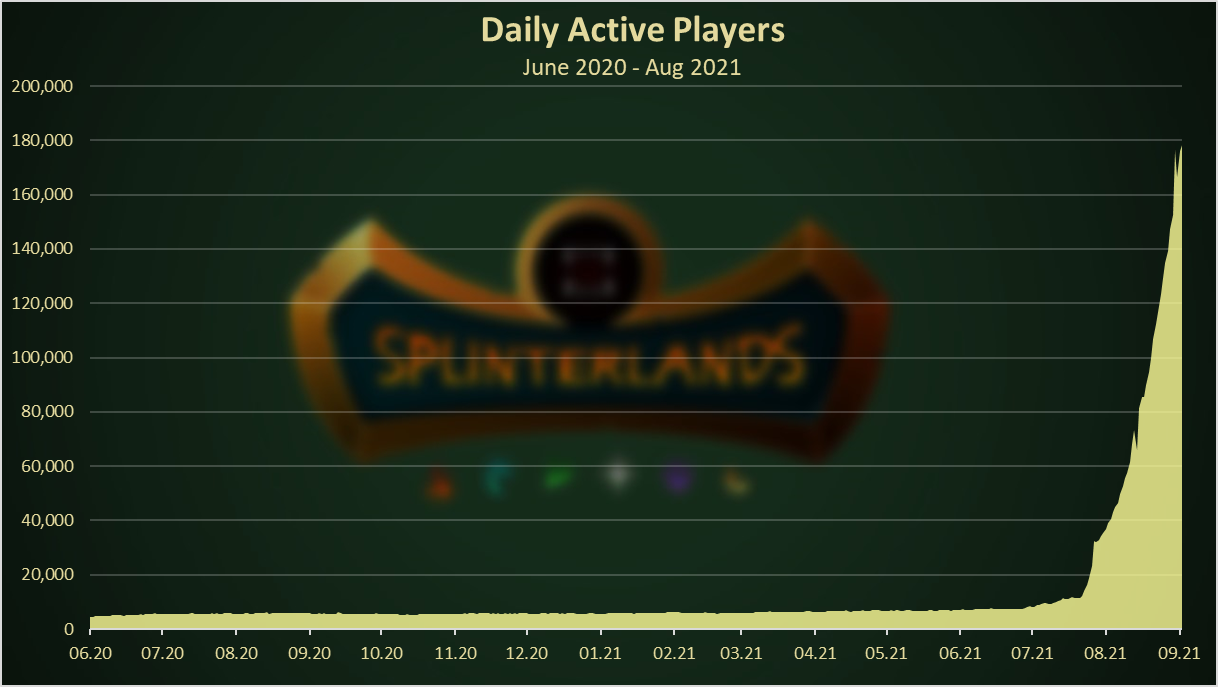 A similar chart as for the numbers of battles. Up until July 2021, Splinterlands had somewhere between 5k to 7k daily players. Then these numbers exploded in July and continued to grow in August as well, reaching 170k daily active players in the last days. At this rate we might see one million DAUs for Splinterlands soon.

The note for the data from the battles applies here as well. In the last month the numbers for DAUs are from the Splinterlands API. The data on the blockchain is lower.

Probably some players are using older version and their transactions are recorded on the blockchain while the new ones are not, or maybe something else how is SL managing the transactions now.

Here are the new Hive accounts created by Splinterlands. 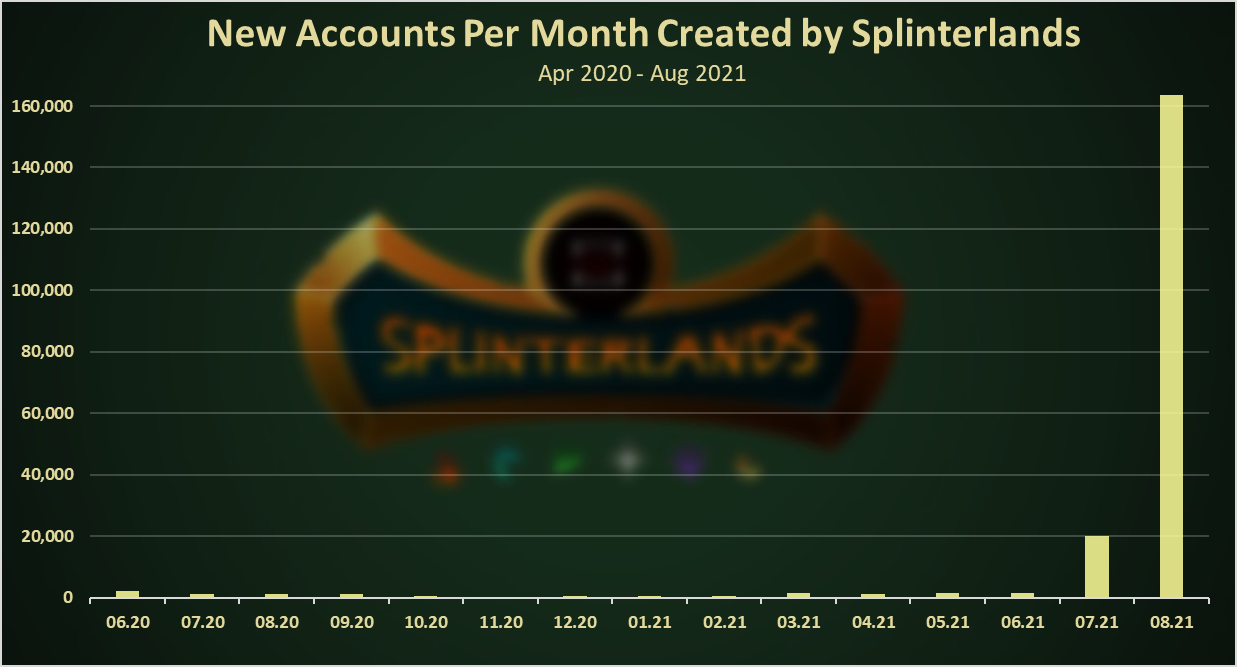 Another interesting metric is DEC supply. DEC is burned when buying potions, orbs, skins and guilds upgrade. The DICE edition is exclusive bought with DEC as well and it is burnt. That edition was sold out recently. Few other things as well.
On the other side the higher the price of DEC is the more is printed.

Here is the chart for the all time DEC burned vs created. 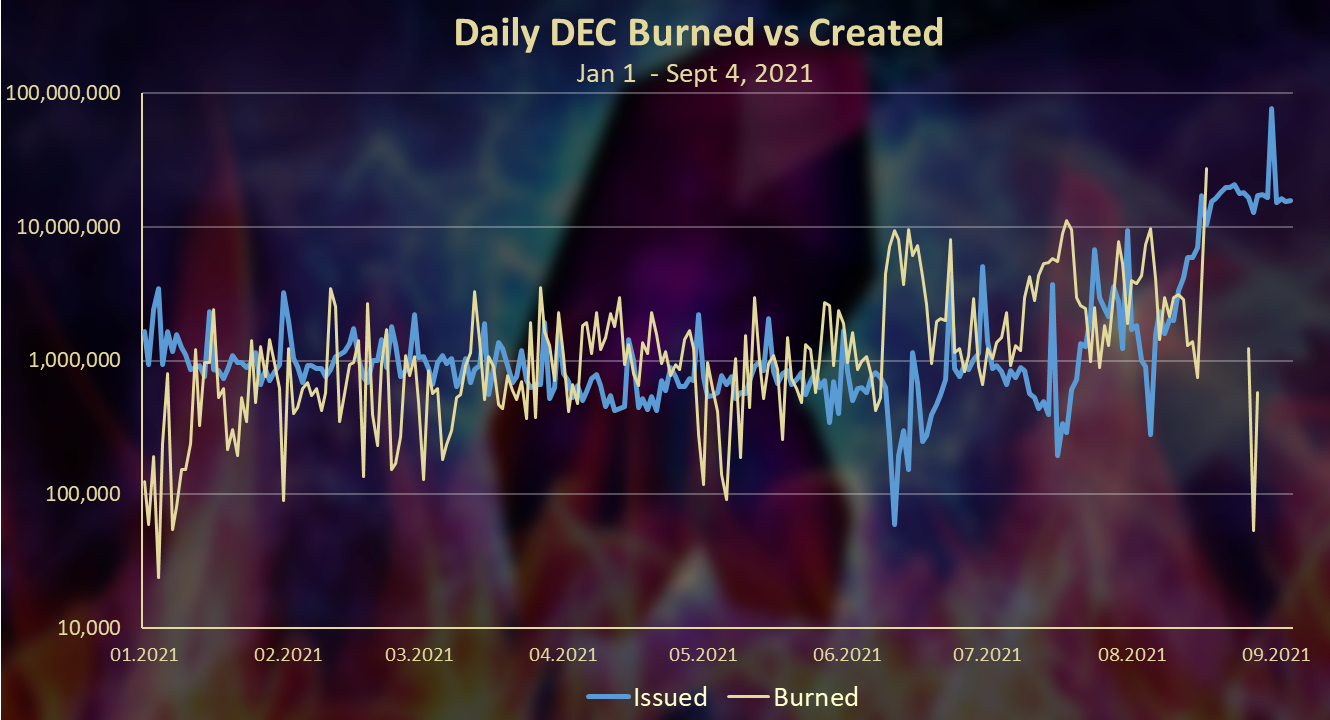 Note the chart is on a logarithmic scale.

We can notice that in July and August there was an increase in the amount of DEC burned (yellowish line) but then a drop. After August 18th, there is much less DEC burned, and for the first time in years there is days with zero DEC burned. This is most likely because the DICE edition is sold out and that was the main sink for DEC.

On the other side the price od DEC remained high and the printing rate of DEC is at all time high.

Here how this has affected the supply of DEC in 2021. 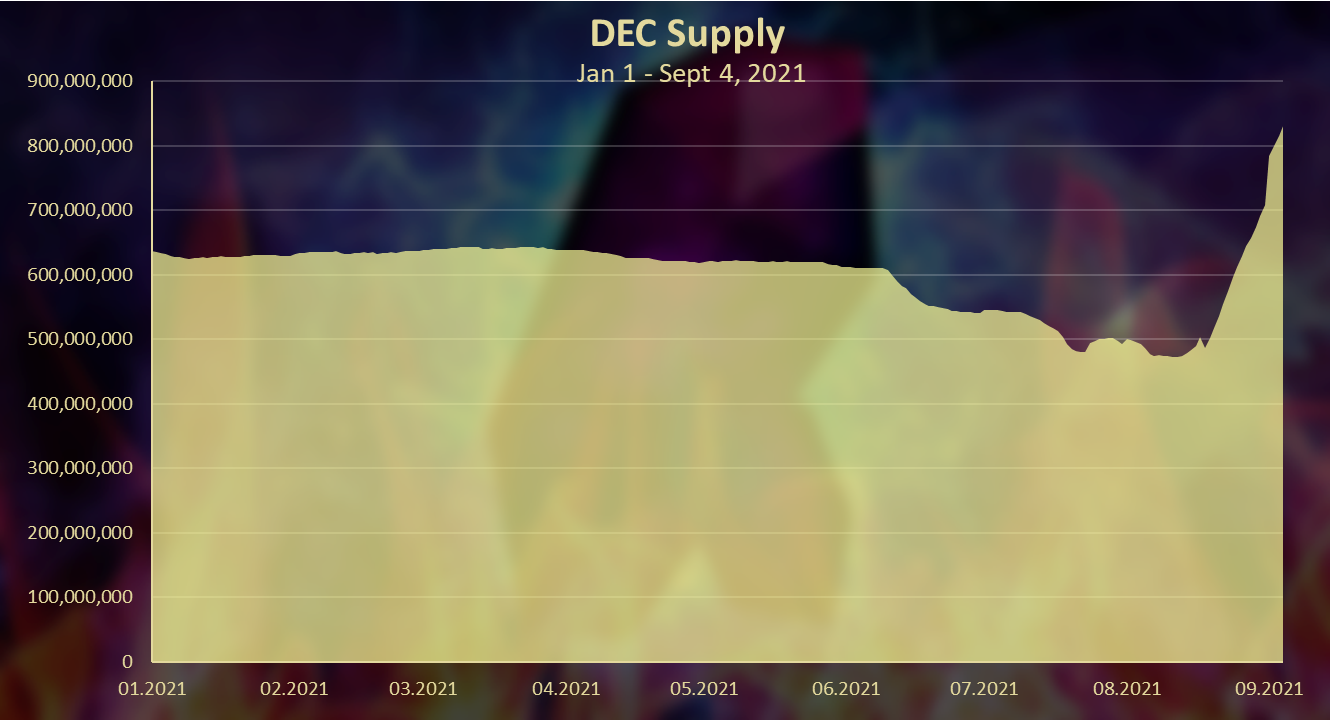 At the start of the year DEC had around 630M in supply and it remained at those levels until July. Then the supply started decreasing (aggressive DICE buying) and in the last few weeks the supply spiked from 475M to 846M now. Around 15M DEC is being added per day.

What about the DEC price?
Here is the chart on all time DEC price in dollars [$]. 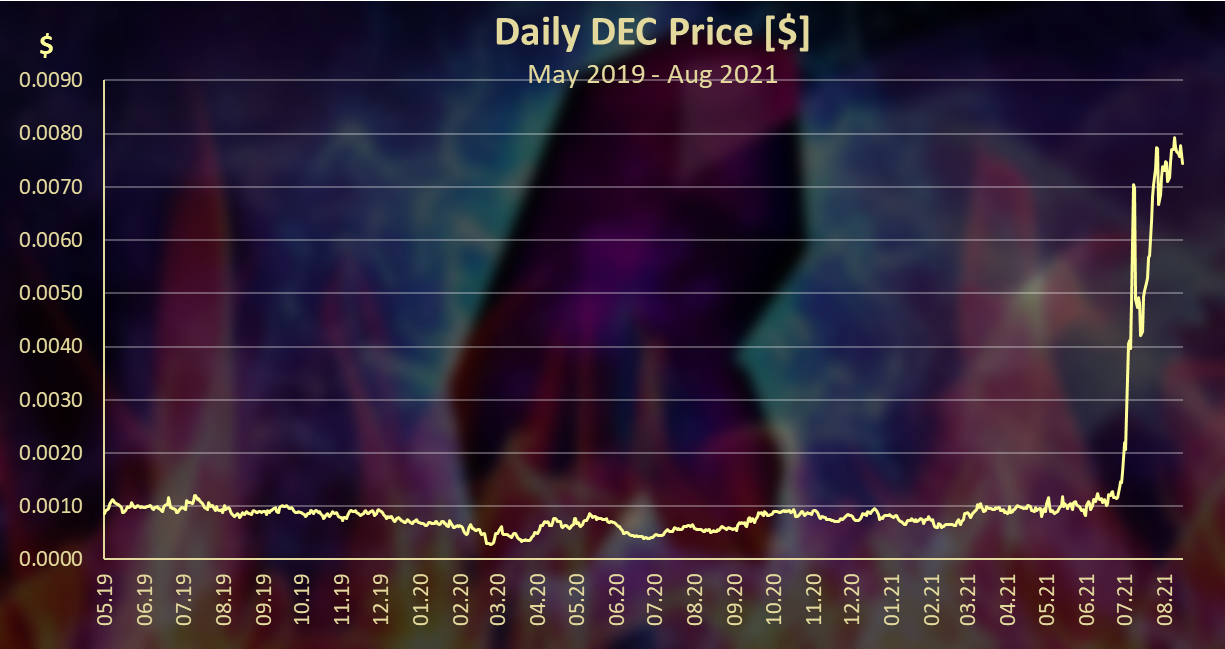 A zoom in chart, for better visibility. 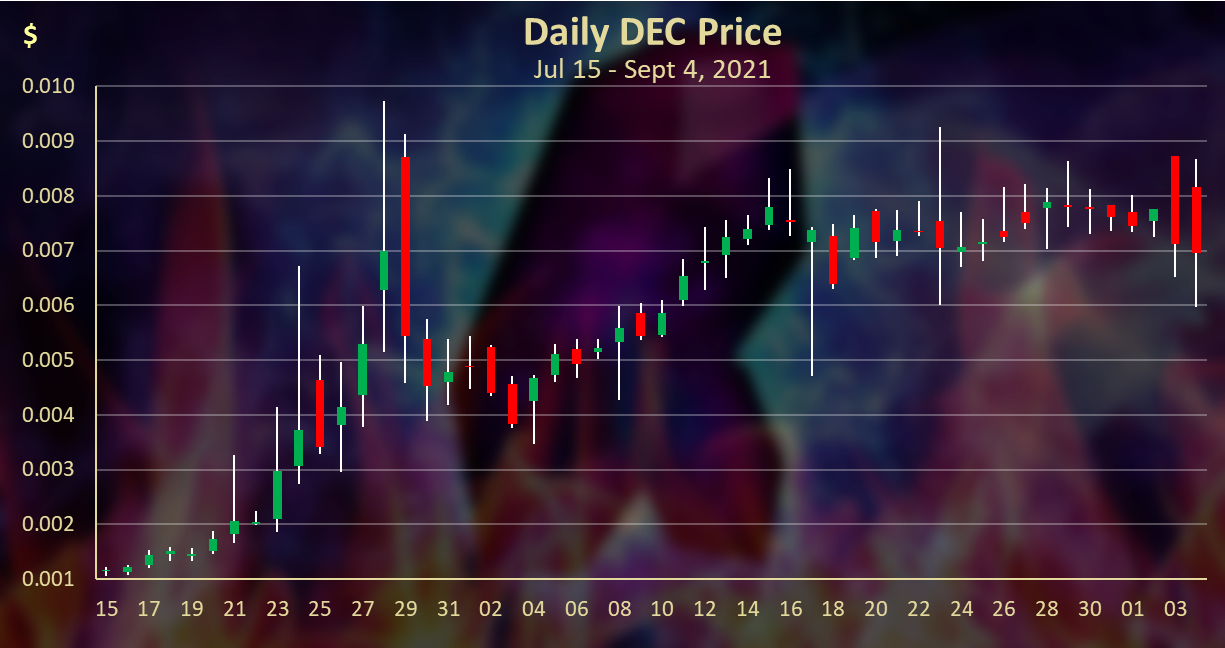 We can see here as well that there is an overall increase in the DEC price in the last period. At this point the price of DEC is dependent on the price of SPS, as DEC holders are eligible for the airdrop. But also from the DEC supply.

Here is the chart for the SPS price. 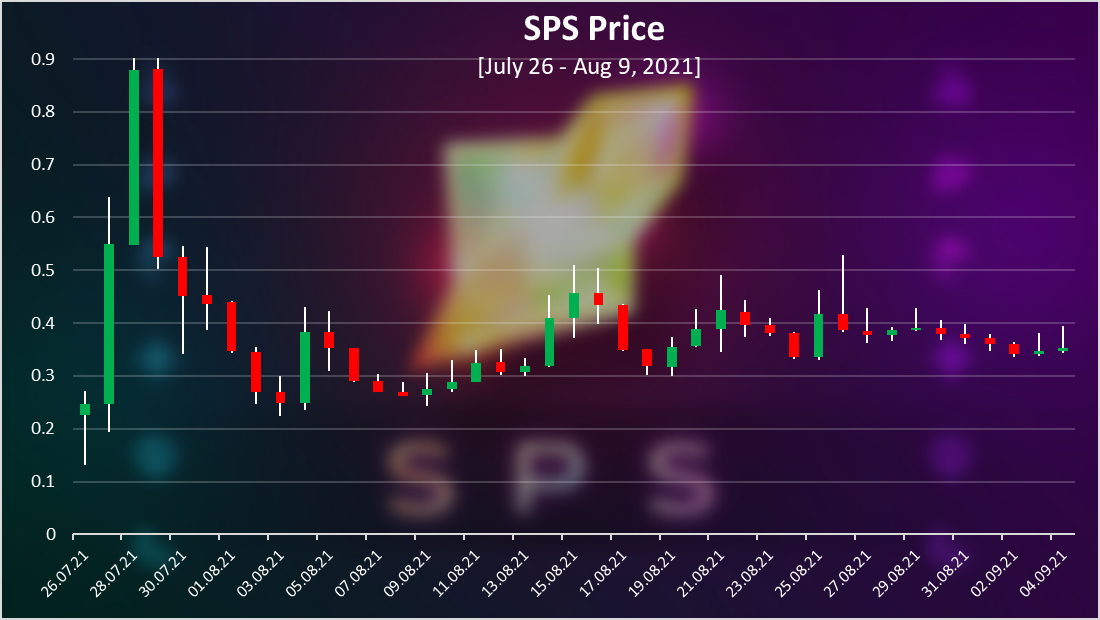 SPS has been around for more then a month now. At start the price spiked to almost 1$ and then it stabilized itself to around 0.4$.

What dashboard are you using to extract these stats? Was looking for it for my own article but couldn't find it anywhere.

Hivesql for some of them and the splinterlands api.

SPS has been around for more then a month now. At start the price spiked to almost 1$ and then it stabilized itself to around 0.4$.

SPS has quite a high inflation in the first year. As everything patiance is the key ;)

Good to see the explosion. What rate can we conceivable expect going forward. Could we see these numbers double again in Septmeber?

That would be massive.

In terms of MAUs probably yes. The first days of Septmeber are having great numbers!

Building for a three years also helps 😊
I keep laughing when I see someone shilling Axie Infinity, which basically looks like an Alpha MVP for a VP presentation, versus Splinterlands which is a full suite with gaming, markets and the whole hive ecosystem embedded.
So bullish it hurts. 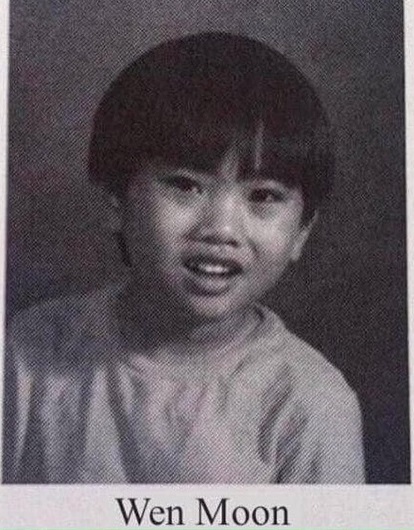 Hi thanks for all the details.

Is there a way you can create a DEC chat with 3 years price history as Hive engine shares only last 2 month data. It would be a cool thing.

There is a chart above with 2 years and 4 months.

I just went through post very fast and saw the other two charts.
Thanks :)

This is all such cool stuff. Have you heard any more about the SPT problems with payouts? You got me really interested in that on one of your previous posts.

There is some migration to a new contract. I havent got any yet.

good to know. I trust they will get it sorted out but I miss getting my little pay outs lol

Thanks so much for all these up to date numbers and a great analysis :D

Wow thanks for the thorough analysis!

Splinterlands literally exploded in the last month? It's in tiny pieces everywhere? Yikes.

Obviously the DICE packs being sold out has a huge affect on the DEC supply... but also I'm (and I'm sure others) are totally hoarding it in our accounts to bump up our SPS airdrop numbers. Once a new edition replaces DICE, I'm not super sure we'll see that much DEC burned.

Excellent publication. My question doesn't have much to do with the post, but do you know how to delegate to an SPT account?

Crazy to see how those charts explodes. Splinterlands is a good game, so their growth is well deserved but I expected a more "smooth" increase. Will keep an eye on this development, really interesting to see how Splinterlands evolves. Great article btw, thanks for sharing!

I wasn't even expecting @steemmonsters accoutn to have this much RC. I guess they had lots of account creation tokens claimed in the past. There's only 9 pending claimed accounts now.
!PIZZA

@dalz! I sent you a slice of $PIZZA on behalf of @d-zero.

Did you know you can earn $PIZZA through Hive-Engine Diesel Pools? (1/10)

I love the stats, but am worried that we might loose some new players as it is very difficult to progress from the beginning if you don't invest money. Monster cards became vert expensive!!