@dalz 77
about 1 year ago
LeoFinance

This is an interesting topic to look at for Hive. Where do hivers post and vote the most?
Having in mind Hive is a global community posting and voting time can vary a lot. Different time zones etc. Can users optimize their posting time so they catch more votes?

This is an interesting point so here we go. Data about when Hivers vote. 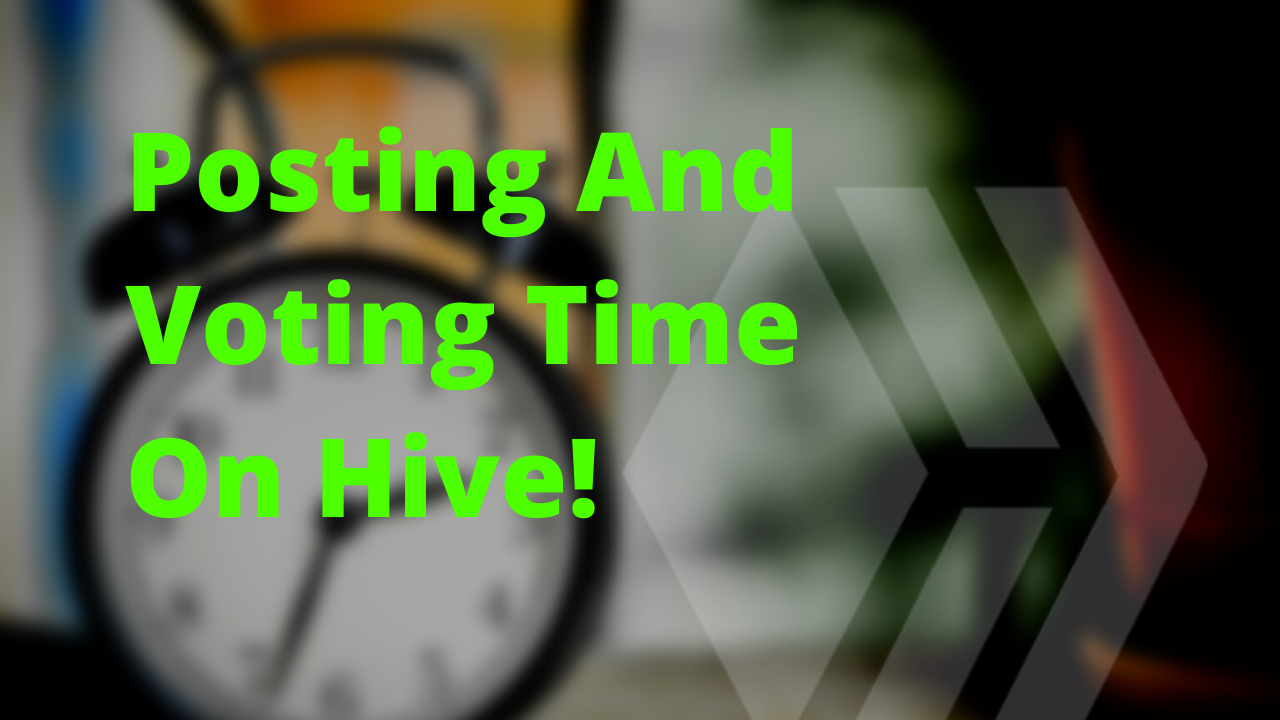 I have made a similar analysis like this one back in June 2020 When Do Hivers Vote TheMost?. A lot of time has passed since then, the HIVE price has up and downs, time to revisit.

We will be analyzing a four week period, March 29 to April 25.

The time is in UTC. You can compare it with your local time zone here: https://time.is/UTC

First the hours. Lets take a look what time of the day Hivers post and vote the most in the period.

Note again on the UTC time.

On the posting side we can see that there is a clear trend, where there is more posting between 13h to 21h UTC, with a peak somewhere around 16h.
Between 1 and 4, there is the lowest number of posts. The ratio of the post in the low hours to high hours is almost 1:2.

On the voting/curating side there is less of a pattern, and a weird spike in 6h. But overall we can see a similar trend here just not as clear one. The 12h to 23h period seems overall a more active one. Curating is more automated operation but we can still see changes in the time of voting.

The data above is a sum of all the posts in these hours for the period analyzed.

Now that we have seen the hours data, lets take a look at the days. What days of the week Hivers post and vote the most?

What days of the week Hivers post and vote the most? 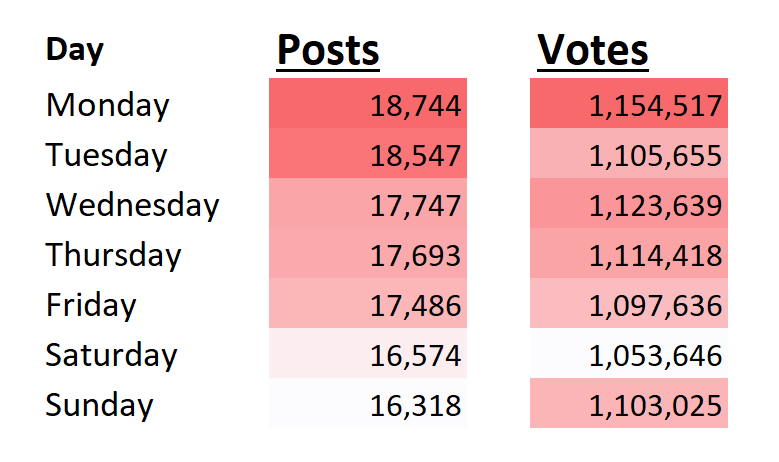 A clear trend on the posts here. Monday and Tuesday are the days with the highest numbers of post, while the weekend not as much. Although the difference is not that high between them.

Similar pattern for the votes, although interesting Sunday has a bit more votes then Saturday, so maybe hivers want just to read and curate on Sunday.

Combing the days and hours and we get the heat map.
First the posts: 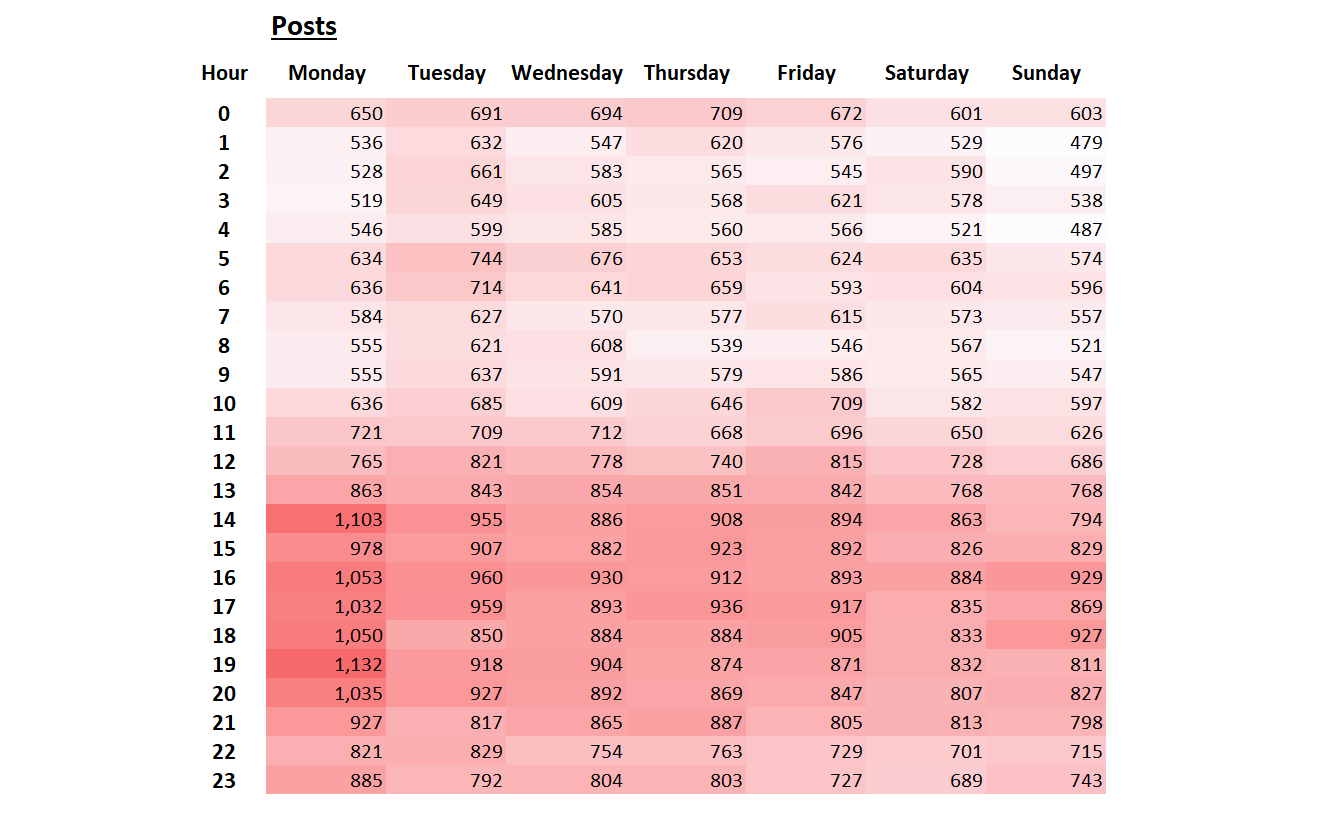 We can see that Monday between 14h and 20h is quite busy. Overall, the 14h to 20h are having more posts, same as from the hours chart. The 1 to 4 period is more quite. 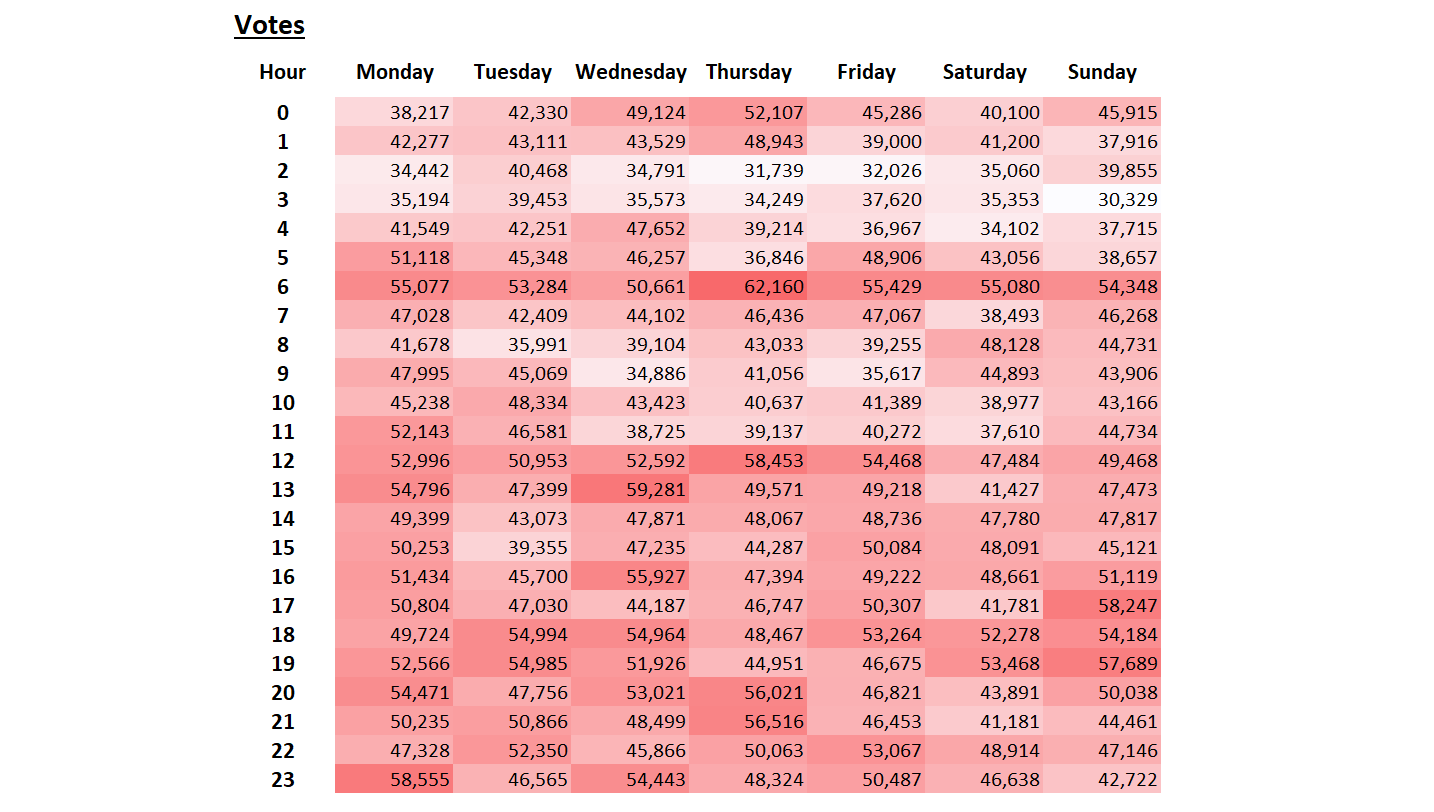 Again, vote seems more random than post. Some spikes happening randomly between hours and days. Although there is more activity in the period as for the posts, that is 13h to 21h. Again Sunday looks more busy for voting then Saturday. Between 1h and 4h is obviously more quite for voting as well.

Here are the two heat maps.

These are a bit smaller, but we can still do some comparison.
The numbers of posts have clearly a larger differentiation, or bigger oscillation so to speak then the votes. Votes are more evenly spread. They drop more in the off hours so to speak between 0 and 5, than the number of votes. This is probably because of the autovotes. The votes drop as well in those hours but not as much as the posts. The peak hours are still the same.

What do you think? From the above seems that Sunday might be the best day to post. A lot of votes and not that much of a posts 😊.

Interesting to see the activity like this! My Distributor for my music productions gives me acess to a rough sort of layout timeframe for my music listeners and have always been fascinated as to when people are active the most, it is interesting to look at.

Thanks! Always intriguing when are people active :)

I think this is yet another way in which we can see that posts/comments are usually more representative of organic user activity than votes. The lack of pattern/rhyme/reason for votes likely represents more bot activity for that transaction type.

Yea posting is more oeganic, voting not as much ... although autovotes follow the posts :)

@dalz, you don't know how useful this post is for me. And not only to me but to some newbies I have called in Hive during the short period since I am here. We were wondering which are the days and hours that are the most effective for us to post so that our articles get more visibility.
Thank you so much for providing this to us!

Hey, thanks!
Glad it is helpfull to you.

Great information. Yes I make most of my rewards on Mondays.

@ganjafarmer 72
about 1 year ago

Just wow information I actually had no idea that you could find all of this information and correlated in such a simple format.

Thank you very much for sharing this information me and puppy dog are really excited about learning more about our platform. You are welcome!
Nice dog :)

I have also asked myself this question. But it doesn't matter currently to me because i try to post every day. Maybe the time would be important, but i am posting in German and english. This makes it complicated, because of the time delay in german speaking Countrys and other countrys.

Thank you for this interesting information. I will take that into account if I prepare my next post.

They must be posting in those Monday morning meetings managers like to have.

Lol ... yea amazing people get on posting on mondays. Post first, then work :)

So, I guess I should always post between 8 am and 2 pm Eastern US time.

Thank you. I've been scheduling my posts for later in the day but didn't know which day is best. Obviously posts about breaking news need to get out ASAP, but this is valuable info for non time critical articles.

Thanks for doing this! It's very interesting to see activity laid out with heat maps like that... it's also a very nice piece of "information design" which is a whole science unto itself.

Sitting on the US west coast, I am usually working during the "hot" times and my available time for blogging/social media is while most people are sleeping. Not sure whether that's a good or bad thing... but it's certainly interesting to keep your info here in mind as I forge ahead!

Thanks!
I would stress to much about posting time ... do it on your terms

Very good information. I had not yet found the best time to publish and vote and thus achieve that my posts and comments have more visibility. With your contribution I think we "newbies" will be able to make some progress. Thanks for taking the time to analyze and share it with everyone.

Monday is the first day of office work. Ehm, I think hivers go to their office.

I've always wondered this given I'm based in Sydney, Australia, I have no idea when the majority of the rest of the world is online. Seems like posting 11pm my time is good...and Mondays... Probably after all that weekend trading activity 😂

It's actually funny to see this. With marketing we always look at times places are the most busy and it's ALWAYS the same. For some reason Monday is the hottest day of the week and around 11am - 3pm EST time zone are always hot. Followed up by a few later at night 7pm ish after dinner and before any "good" shows come on but even that part is starting to be phased out as more people are cutting the cord.

I wonder if this means that people's habits will start to change?

Will voters log on earlier to read posts they may have missed previously?

Will we now just get an afternoon spike of both posters and voters?

It will be interesting if the same exercise is done again in a fortnight or a month to see if there have been any shifts.

But thank you for doing this in the first place - it's very informative :-)

I didn't know the stats but schedule my posts for 18.00 every day as it seemed to get the best reaction form the community. It seems related to the countries people are tuned in from and daylight hours.

Very interesting. I'm new here, and I have just a pair of post, but with these I realised the big diferent between the first and the second post and I didn't see the cause of variation, so it could be useful know when is it better to post . Thanks

Very interesting. I'm new here, and I have just a pair of post, but with these I realised the big diferent between the first and the second post and I didn't see the cause of variation, so it could be useful know when is it better to post . Thanks

Now this is truly valuable information for those trying to maximize their reach on Hive. This may certainly help out new users on the platform who have a few friends helping get their feet wet. IMO, I think the post/commenting data is more important than the amount of votes mostly due to bots. Of course there are bots that comment as well with generic information, or people use comments to trigger a donation from a bot, but generally it can give a sense of more organic data compared to votes which I'm sure many veteran users may use auto voting services primarily than commenting bots.

All in all, its a good step in the right direction to discern when may be a good time to post content.

Ohh I've been looking for this kind of data for a while now. Thanks so much for sharing it, it's gonna be very helpful!

I have always wondered this, thanks for the information really well done post.

@luvshares 57
about 1 year ago

Sorry, you're out of LUV tokens to be sent today. Try tomorrow. (Having at least 10 LUV in your wallet allows you to freely give 3 per day.)

I think this graph
has to do with eastern time.
At least we all know when to post and comment
in the long run

Its UTC time ... but dont stress to much about posting time :)

Thanks a lot for the helpful info! My experience with getting votes does align with the data you've provided. So I was already suspecting some of these stuff. It's good to have a full breakdown.

I'm still wondering about the advantages of posting when there isn't lot of activity. I'm small'medium sized account. Less competition might be the best thing I could ask for :)

I think all these numbers will change after the next hardfork in terms of curation rewards distribution. you know, the 3 windows....etc.

I just began my new journey on hive. So, this supposed to be helpful for me. Maybe...to get more rewards lol.

Anyway, thanks for sharing @dalz