"Silent Sha-vi are entities from the shadow realm that take the form of giant snakes. They travel in darkness and shadow as if each dark corner is a gateway that leads elsewhere. They have an appetite for slow and creeping deaths, feeding off the escalating fear of the victim. If you think there might be a monster under your bed, it's probably a Silent Sha-vi."

I don't have this card so I'll just use the free card and play. Since it's part of the starter card, I got lesser rewards. Anyways I just came back from overseas trip and missed 4 playing days of the new season so the rewards were even lesser as my rank is low. 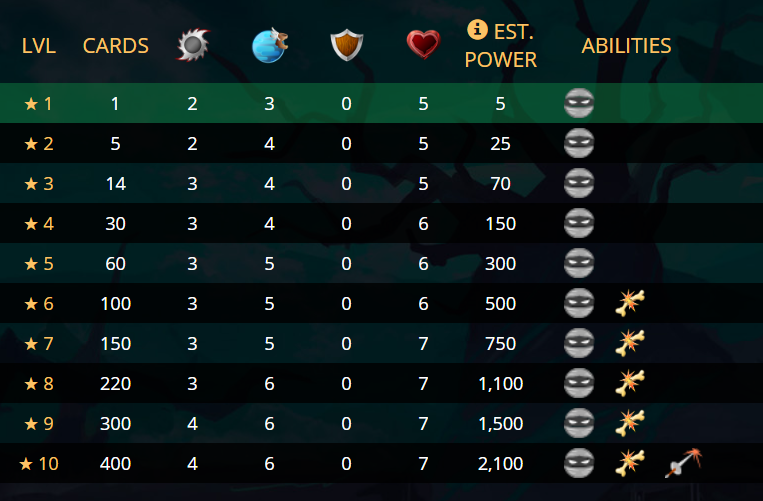 It definitely is one of my go to cards whenever I play death because I want its sneak ability and will try to combine with undead badger. These 2 cards would take out opponent's cards at the back.

The battle mana cap was 22 with the standard ruleset.

Both of us utilised the maximum slots that were given to us even though the mana cap was 22. Since death have cards that have low mana, filling up the slots can be quite easy.

Was actually abit doubtful whether I could win because of the riftwing's scavenger ability and my snipe couldn't take it out because riftwing have a high health. The cursed windeku also had quite low melee attack making it difficult to remove it fast. Since we had many cards with low health, there were many cards that got KO'ed and helped riftwing get increased health because of scavenger ability.

My snipe ability card got removed and the opponent's sneak ability cards were removed. I guess I have the upper hand now even though they have 2 magic and one of it has life leech. Was not very worried because the cursed windeku still has quite high amount of health. Let's see how the battle goes.

This round confirms that I will win because the card with life leech is not able to KO my cards fast enough as it only has 1 magic and it's life leech can only gain one health each time. Definitely not strong enough to withstand the attacks of 3 melee attacks at each round.

There was no threat to my card anymore because riftwing does not have any attacks and could get KO'ed by 3 of my cards. Here, this is just a one side attack as riftwing can only scavenge. Even if my cards were to miss the attacks, I am still able to win because 3 of my cards have the ability to attack that one card.

The picture below is just for the purpose of personal satisfaction. Seeing the opponent's card have a health of 0, just wonderful. Okay that's it. That's the end of the battle.

In this battle, you can see that it helped me to take out the cards that were attacking, instead of trying to hit riftwing. This is especially useful because riftwing can be annoying with its scavenger ability and if I had cards that could only attack the front card and have low attack, the opponent might be able to take out my cards faster than I can remove riftwing. Which is very badd (can be seen in my previous post of weekly challenge, of course I lost).

!PIZZA for our em!