"Hill Giants live in the Talus Bluffs on the outskirts of the volcano known as the Mountain of Ash. They are nomadic people that travel from hilltop to hilltop following herds of deer and cattle. Though they are intimidating, Hill Giants are typically more far more inquisitive of other cultures and seek to learn from them rather than attack. However, if they need to defend themselves, they attack by ripping boulders from the ground and are able to hurl them up to a mile. The people of Praetoria are glad to have them on their side against the Chaos Legion."

I don't have this card but it's free to use so I was able to use it during my battle. 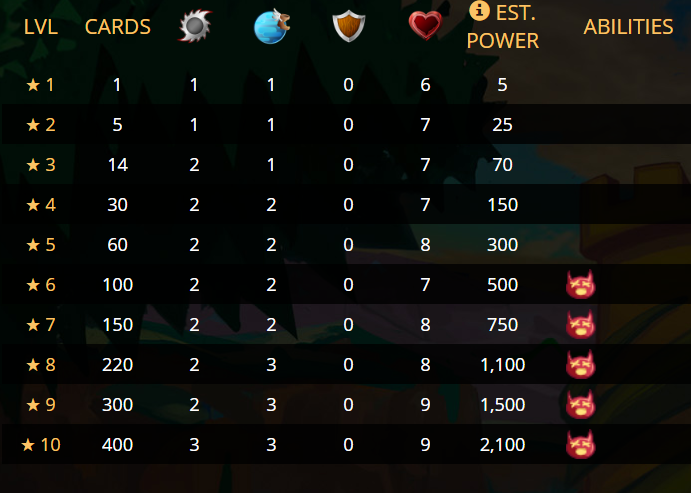 It has a stun ability at level 6 which cannot be shown in my battle since I do not have a level 6 hill giant card. Stun ability has a 50% chance of activation so it's either a stun in that round or it doesn't...obviously. Anyways I can't really say I like this card at level 1 since it only has 1 melee attack and speed which makes it pretty disadvantageous as a frontal card. But since it has 6 health, it's a not bad tank I guess though no shield so maybe not.

I think if it is a low mana cap I would use it as a frontal card since it has a nice amount of health but not very nice melee attack, that's why it's so cheap. If paired with heal it would be good as it can last a bit longer. I have yet to master the pairing of this card since having either water, fire or death would make it quite useless. Water having high speed and shield, fire having high melee attack and death having cursed windeku which has thorns. Hill giant? not a good counter frontal tank.

The battle mana cap was 16 with the standard ruleset.

The opponent had 6 magic attacks but since the khmer princess had 1 health, my goblin thief was able to attack and KO it before it could hit the hill giant and KO it. Lucky it had speed of 1 else my hill giant would have died instantly. It was annoying that I could not hit the djinn biljka though, really was the winning factor of this battle. Wait a minute, did I just reveal the result? Oh no, you got to continue reading first!!

Even though I already got rid of the failed summoner, it was useless to get rid of it first since it has no threat. The middle and back cards were the real threat. And I couldn't even hit the card at the back now that venari scout is at the front. Only my goblin thief was able to attack the back card but no, the camouflage ability caused it to attack regal peryton instead.

My cards definitely have no chance here since the health of goblin thief is not high enough to handle the 4 magic attacks.

Being the range attacker, it can't attack and it just useless at the front. Even if it can attack, having 1 melee attack doesn't even help it at all since there are still 5 health in the opponent's cards, not even factoring the miss rate of the regal peryton.

And yup lost to the opponent which still has 4 magic attacks.

Nope. It didn't even work against those magic beings. Too weak of an attack couldn't help me win. I also couldn't remove the djinn biljka since it has the camouflage ability. That monster has caused me much damage as compared to the rest since I couldn't remove it.

Not really. I tried many battles with it but mostly ended up with a loss. Can't seem to find a way to use it properly unless it's in a low mana cap. In a high mana cap, I would never use it.

Thanks for sharing! You were unlucky in your experience with the Hill Giant, because he is not good against mages anyway 😦

thanks for reading! Yeaa definitely not good