The Beginning and 3 MAILs - My "solo" ListNerds Adventure

@drlobes 64
about 2 months ago (Edited)
LeoFinance

I don't even know how to begin this, but here it is. Approximately a month ago, I started seeing more and more people (some I was following and some not) using and writing about ListNerds, something I'd only heard once before in a clip made by @bradleyarrow about his experience with it. I went to their website and had a look but to tell you the truth I didn't understand much at that time so I just said, pass.

Several days later, I see other people discussing the same topic, so I decide to register on ListNerds and see what's in there. This was my first mistake (registering without looking for more info), as I could see later that if you register through someone's affiliate link, later you could be part of their team which I understand brings a lot of benefits, but if you are already registered, that's not possible to do after. @thisismylife made that clear but still was open for a chat and offer some support if I needed some.

After registering, I wasn't able to understand much, which is why the ListNerds dashboard greets you with written and video tutorials. Those tutorials should always be viewed by someone new, but, I am more likely to learn new things by trial and error and that's not always the easy or the best way. 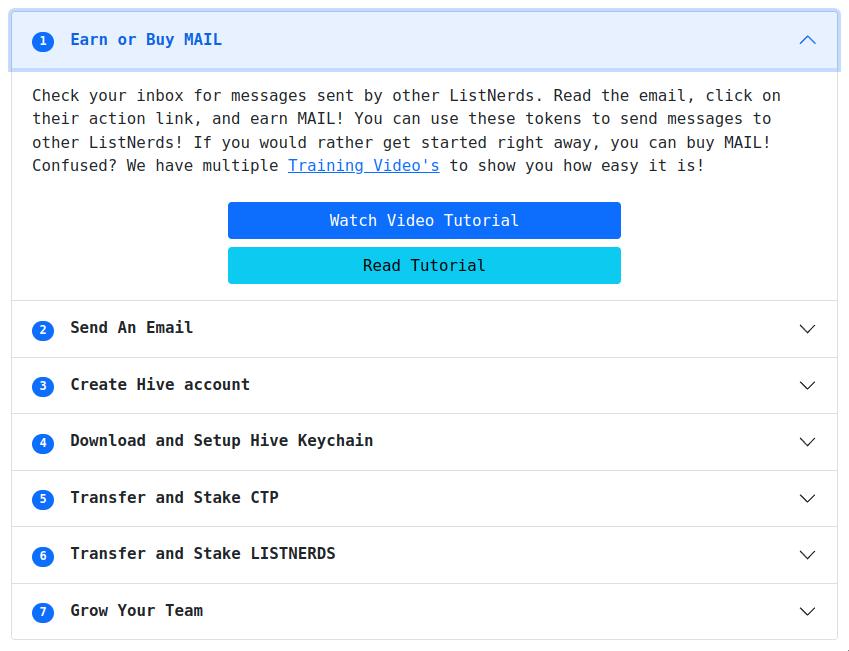 So the date was June the 4th, I was armed with 18 MAIL :laughing: and decided to go for it, but which article should I link in my mail? My most recent one was a lame meme challenge post and I went with that. The results? Ohh, as you can imagine, I never stood a chance, see for yourself:

In conclusion, I accepted defeat and spent a few hours reading more articles I could find on Hive about ListNerds, however, I now recall my second mistake, which did cost me some extra hive. After registering with LN I understood fast enough that in order to be successful using this platform, you will need to stake CTP and ListNerds tokens, the more you have the bigger the rewards will be later. Also, I saw that you could buy more MAIL to send your link to more people and that was done with the ListNerds tokens, so I went to that section to buy some. 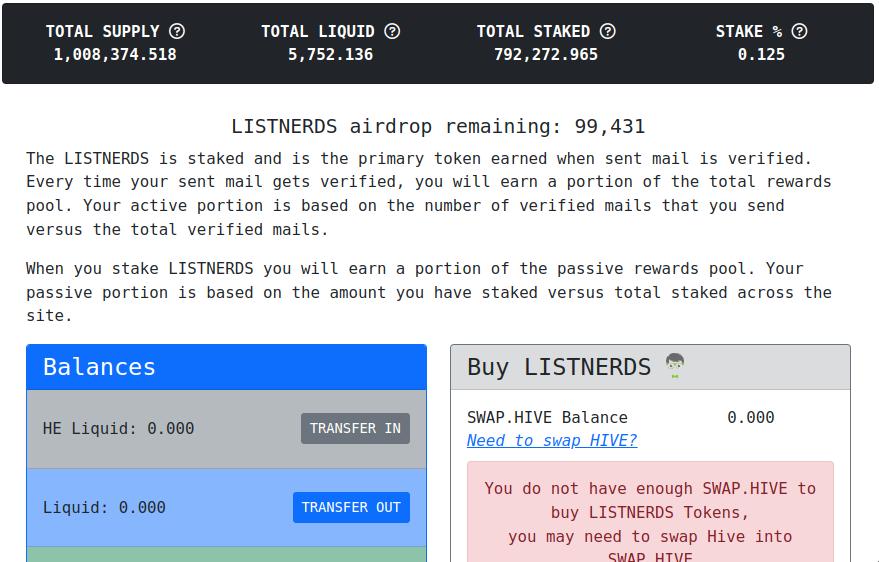 I already had some Swap.Hive available, wrote down a number, and hit buy but I received a lot less LN than I was expecting for the amount of Hive I had available. After verifying the Hive-Engine website I understood why, ListNerds picked the lowest available price offer, but them offers had a higher price than expected. I'll post a screen here with my early buys but please don't laugh, remember what I said, trial and error, get burned, and then you'll remember for sure how not to do it in the future. 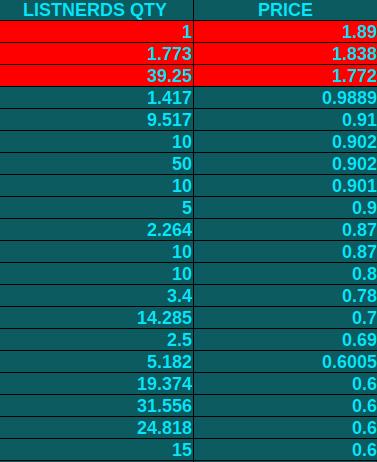 Can you see the price difference? My manual orders were executed at about half the price, it just wasn't instant and I had to wait for a while until someone needed my hive and was happy enough with the price. Then in the following days, I tried lower and lower prices with my orders and slowly they got executed and my LN bag was growing.

Now more days have passed, and it was time to send another mail, I had managed to get myself the magic number of 148 MAIL and went for it, I found that my latest Hive post had a few comments and votes so I was set. To my surprise, I don't even remember exactly when but it was 1-2-3 days later, I saw this in my mail history:

Ohh man I thought, what in the hell am I doing wrong here, I was back to almost square one. It looked like the reading I've done CAN'T be enough if you don't put it into practice as others had done it before and put it in writing for others to know, I needed to humble myself and try again. Read again, read some more, ask some friends their opinion, join the discord...

It was the weekend, 17th of Jun when I first tried to buy some extra MAIL using ListNerds token, for two days in a row that was not working but I was getting no errors. What I had done is that I transferred my tokens on the LN platform thinking that's where they have to be if I wanted to buy MAIL. I was proven wrong, you need your ListNerds tokens to be in your Hive-Engine wallet if you want to buy MAIL on the LN platform.

Now that I've done it correctly, I bumped my mail number to over 1000 but I said to myself, if you are to use this much mail, you need to write a better article than the lame posts I had already used. As I was hungry and craving mushrooms, I went cooking and documented it all with a few photos and wrote a post detailing what I had done, at the same time this was also an Actifit post which went from a basic Actifit post to something more palpable and interesting. Hours went by, days went by, and then the time came and now I can proudly show you the results:

Even now I can't believe how I managed to reach that number, maybe some people smelled the noob fish in me and decide to be nice, I don't know, but this is exactly what I needed. Since then, I bought and staked CTP and ListNerds almost every day in small quantities and I'll keep doing it when the budget allows it. I'm also spending time every day on the platform reading interesting articles from many people, interacting with them, leaving feedback where I can, and of course voting for those that I think to deserve it the most, as my votes are limited and not easy to come by.

If you managed to reach the end of this post by reading it, THANK YOU so much, it means a lot to me, and you'll hear again from me sooner rather than later. I'll keep working at it, maybe even try more cooking posts :laughing:

Proud of my fish numbers! I already know my goals by the end of the year, but I'll disclose them in more detail in a future post.

Wow, congratulations, your stakes are growing :) We do learn everyday and glad your Mails are doing great. I wish you the best on your ListNerds journey!

The first steps always come with mistakes. Oh, how many of them I had...))
Congratulations! You definitely understood something and learned something!)
!СTP

Only if you are not trying you make no mistakes, otherwise this is a good learning experience, every time you make a mistake you learn something on what to do or how not to do it. Thank you for your comment!

We all learn by doing, making mistakes and the resulting adjustments.
Realising this and being persistent are key. I am glad you did!

And I'll keep doing it, seeing so many great people around it's encouraging. Thank You for your reply!

Thanks for your update and I am glad you are on the good path now stacking those ListNerd tokens.

I also did not get my first few emails verified by mistakes like these.

I remember how it was all strange to me at the beginning too.

Good to have you onboard with ListNerds, I will look out for your mails!🙂

You gave a good desciption, from taking baby steps on ListNerds, to learning to walk and then running, and the results show. Best wishes.

Thank you for this nice reply, that's the way to go, step by step. Have a wonderful day!

You did put effort in this post and stories often attract people. I have a feeling you should look forward for your 2nd validated email. ;)

I can only hope to be inspired enough to keep people curious and entertained, also not being an English native doesn't help, but I do my best! Cheers man!

not being an English native doesn't help

Many of us aren't. Don't worry, the substance matters more than the form.

Thank you so much for your support!

You are most welcome my friend😎
@drlobes !ALIVE
!CTP
Have a wonderful weekend

Thank you so much for the kind words!

I'm sure most of us made some mistakes early on.

My first mails images linked to the image hosting site, lol. Then, I did another mail without a link, "Whoops!"

All the best with the ListNerds journey!
!CTP

Yeah, and that's a really painful mistake to do when you are new and don't have premium yet and have to wait so many days until your next mail :)

Thank you for your reply, best wishes from me and I'll see you around!

Just as a curiosity, I saw you sending some mail with links to some very old posts, is it worth it, do you get good rates on those as well?

I haven't had issues with that. Most of the people on ListNerds haven't seen that content, and a lot of it is fictional stories, so from that perspective it's better to have it running from the first chapter. In fact, I originally posted a new story link, which was quite far in already, and that one didn't perform well.

@thisismylife 73
about 1 month ago

I already told you, we all made these mistakes. I'm the same as you, trial and error will teach me much better and faster than reading :) so I also dove in and went for it. With a few non verified mails as a result due to not enough mail.

These mistakes are just a few good lessons. You will all figure it out :)

Then trial and error it is until we get better at it. 😁

We learn from our mistake. You did a great job by sharing your experience. Indeed helpful post for new user of listnerds. Stay blessed

Thank you so much for your reply! Have a wonderful Monday!