Hey everybody and thanks for stopping by!

I woke up kind of exhausted this morning. I was plagued by some heavy duty leg cramps I suffer from now and again and then after taking some magnesium for them, spent the remainder of the night a bit restless. 😔

After some light housework, we headed out for a hike. It was a gloriously sunny day with big fat fluffy white clouds and lots of blue sky. A nice breeze was blowing as well.

The digitalis is beginning to bloom!😁 You will see a lot of pics on the subject in the next couple of weeks as I really like it! Here is today’s digi photo. As we were headed up the first part of the trail today, we ran across this #TinyTreasure This little one was just sitting there appearing to stuff something in its mouth. The closer I got, the more it wanted to run, but wouldn’t abandon what it had. Turns out it had stripped a piece of bark fiber from a branch and was very intent on keeping it. I was able to get within six feet of it before it spit out part and ran up a nearby tree. We took the branch and moved it close to the tree so it could resume its labor after we had gone.

Actifit-Lamb said it was such a beautiful day that she wanted a tea party on the new bench that Keith & Lynn had installed on the trail system. So we stopped for her refreshments. When we arrived home, it was time to finish up a coffee order for a customer, so on to the roasting we went.

I find myself pretty much done in for the night and more than ready for bed. You got voted by @curationkiwi thanks to elizabethbit! This bot is managed by KiwiJuce3 and run by Rishi556, you can check both of them out there. To receive upvotes on your own posts, you need to join the Kiwi Co. Discord and go to the room named #CurationKiwi. Submit your post there using the command "!upvote (post link)" to receive upvotes on your post. CurationKiwi is currently supported by donations from users like you, so feel free to leave an upvote on our posts or comments to support us!
We have also recently added a new whitelist feature for those who would like to support CurationKiwi even more! If you would like to receive upvotes more than 2x greater than the normal upvote, all you need to do is delegate 50 SP to @CurationKiwi using this link.

Great shot! These pictures are amazing. Thank you @elizabethbit for sharing this.

Those flower pics are awesome!

Thank you @johnspalding! Have a good night!

Huh... magnesium leg cramps. I had it wrong all along. I thought it was potassium. I sometimes would have leg cramps after swimming for long periods. Squirrels are so adorable and interesting to watch, and Disney animation has made them lovable to many kids. I know that they potentially carry the salmonella bacteria and Lyme disease, so we know that we shouldn't come to close to them.
LOL, that is so funny that the creature you always see in the woods was taking a picture of you as you were taking a picture of him... just like a scene in the movies when two detectives discover each one observing the other when their camera sights zoom into each other. I imagine you carrying ActifitLamb in a tiny backpack as you hike, like this: 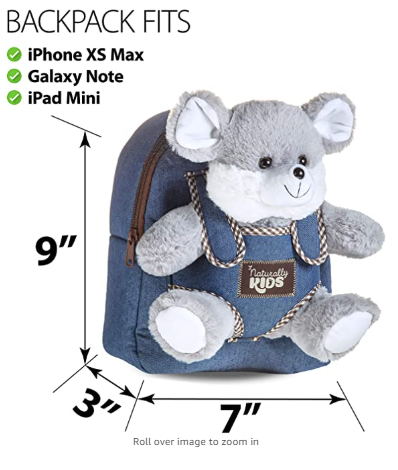 Have a terrific day, my sweet sis @elizabethbit. Take care 🥰🌺🤙 and lots of love and hugs 🤗💕

Hey @silversaver888! The magnesium is very interesting as it not only helps leg cramps, but has shown to lower blood pressure and help with heart arrhythmia. One side effect that's not always good is intestinal.

Actifit-Lamb has her own full size backpack that houses all of her accessories, so she always has anything she needs when we hike. She does let me put my water bottle and a couple other things in there,lol!

Yeah, that creature is seriously stalking me, lol! Just kidding......

When I was a little girl, I had a stuffed squirrel I named ChiChi. I have always love animals. I could tell you stories......

Thank you for your support and love. You are much appreciated, sis!🤗😘💕🌸

You have accordingly been rewarded 164.535 AFIT tokens for your effort in reaching 19389 activity, as well as your user rank and report quality!
You also received an 15.57% upvote via @actifit account. 10.06% of this upvote value is a result of an exchange transaction you performed for 20 AFIT tokens !
The following boosts were applied to your post:

Running Shoes - L2
+ 15 AFIT
Boosts increased your AFIT earnings by 75.0000 AFIT
Actifit rewards and upvotes are based on your: