Giant African snails in Venezuela - Part 2: How to kill them? Giant African snails in Venezuela - Part 2: How to kill them?

The African land snails are a group of snails that unfortunately bring with them ecological and health problems.

First of all, they are an ecological problem, as they become invasive species once they leave their natural environment. This is because they can easily proliferate due to the lack of effective natural controls and the problems they induce in the local fauna and flora. They are voracious, so they can feed on many types of plants, which would be disastrous for agriculture. In addition, they can make animals that come across them sick.

Secondly, they are a health problem since they are vectors of several parasites that can cause diseases in humans, from simple vomiting to serious pathologies such as meningitis or schistosomiasis. We would not want to keep them as pets (although some do) or let children play with these animals. They should be handled making sure not to make physical contact with them or their waste or fluids.

This is what we talked about in our first post on the subject. If you want to learn more about the biology of this animal and its situation in Venezuela, visit that article to gain more context. But in essence we saw that some local authorities have been informing the public about the proliferation of the snail and many Venezuelans have been alarmed by it, although some did not fail to take it amusingly.

⬆️ Animated memes roaming around in messaging apps. Another version is also on YouTube

By the way, the species of African snail we deal with in Venezuela is Lissachatina fulica, which is not precisely the one depicted in this meme (which I suspect was not made in Venezuela) nor the one shown in the following infographic prepared by the website LaPatilla (which is indeed of Venezuelan origin), also widely disseminated in social networks: 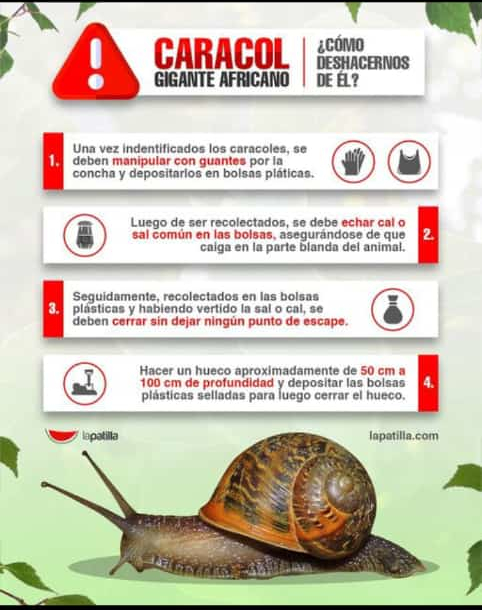 ⬆️ Thanks for the information. By the way, the model in the photo is not of the invasive species that has proliferated in Venezuela! 😄

The giant African snail Lissachatina fulica has a rather pointed, brownish shell. Its soft parts are green or brownish and look like rubber. This is important to keep in mind in order to distinguish it from native species, which unfortunately have turned out to be collateral victims of the panic and misinformation of many Venezuelans. So take a good look at it: ⬆️ Infographic about Lissachatina fulica. Picture: School of Microbiology of the University of Antioquia (Colombia). Surprisingly, I have not been able to get good infographics in English.

Well, in our first installment we came to the conclusion that we obviously have to get rid of the animal, so its extermination is justified and, in fact, recommended and authorized by health and governmental organizations. In this second installment we will expand the information and learn about the methods used to kill snails, which will serve as a prelude to answering the pending question of whether these animals suffer, something we will complete in the third and final installment.

Getting rid of invasive snails

It is surprising to know that there are many methods to kill snails, developed precisely because of the need to eliminate them. Some of them are the use of molluscicides based on chemicals such as metaldehyde. These are industrial products that can be purchased for this specific use which is not something that goes with the spirit of traditional agriculture.

However, in terms of domestic methods, more popular are the use of salt, use of lime, use of hot water, use of cold water and even by use of beer. Apparently, there are snails that feel strongly in beer (to yeast, actually) and and this has a scientific basis, so snail traps can be set up with beer bottles. I'll leave the jokes to you in that respect.

How about a rougher method such as provoking injuries using scissors and trampling? It's rough and "gross", but effective. However, it is not recommended for dealing with this snail pest as there is a risk of contamination by coming in contact with the animal's fluids. In addition, some dead snails produce a strong odor which in turn can attract animals that may be contaminated by them. In any case, the bodies should be disposed of properly, typically by burying them.

There are gardeners who often have to deal with snails, so they know other methods. In this article you can see several of them. Surprisingly, you can buy worms that specialize in killing snails, as well as snails that eat other snails and a variety of other gardening techniques to neutralize them.

However, the method that stands out is the use of salt, which is recommended by some Venezuelan governmental and non-governmental health organizations and has been widely disseminated for the knowledge of the communities where the snail is present. For example, the news blog of the Ministry for Ecosocialism (Venezuela) mentions the following:

It should be noted that for their eradication, the snails must be placed in a container with a saline solution, made up of three parts water and one part salt, then the collected snails are introduced into the container and covered for four hours. Afterwards, they are extracted and finally buried to ensure their elimination. (Emphasis mine.)

So a saline solution is the "lethal injection" in execution. But why salt? The short answer is that it dehydrates them. You see, informally you can say that water is naturally attracted to salt, so it flows towards it when they make contact. The biological and chemical process responsible for this is called osmosis, and from a more technical point of view it can be described as the flow of a solvent from a less concentrated solution into a more concentrated solution. ⬆️ What happens with the osmosis process. Picture: Wikimedia Commons.

In the illustration above we see that the water is not uniformly distributed and level, which is what would normally be expected. However, both sides of the container have solutions of water with different concentrations of a solute substance (which may be salt). The water passes through the membrane in the middle and accumulates on the other side as it seeks equilibrium.

On a curious note for science nerds, osmosis is the basis for the treatment of water poisoning (which is extremely rare, by the way). When you have too much water in your body, it tends to accumulate in your head and this can be disastrous for your brain. The diagnosing physician may inject you with a saline solution, as this will cause the water to start flowing out of the areas where it is concentrated and stagnant until it can finally be excreted through the kidneys.

In the presence of a lot of sodium chloride (salt) in the snail's skin and in its interior, the water molecules will spontaneously want to flow out of the cells through the cell membrane into the so-called hypertonic solution on the outside, which will cause the cell to lose volume and die. If this happens to all the cells in the organism, we can imagine what will happen at the end. ⬆️ The figure on the left is what the cell experiences when there is too much salt in the blood. We see that it shrinks because of the lethal loss of water. Picture: Wikimedia Commons.

Excess salt and dehydration are logically dangerous for almost any organism, but in land snails, the contact with salt is particularly sensitive since their skin is not robust like that of humans and other animals. In the following amateur video we can see in close-up how the snail's body reacts when it assimilates a lot of salt. If you do not have a strong stomach or you are very sensitive, I recommend caution to watch it.

You can see that the reaction is a bit violent. The slug's body starts to produce a mucus to try to protect itself and prevent dehydration, but since there is too much salt, this is in vain. We must remember that only snail and slug species that have been declared invasive species and pests should be killed. We should not confuse them with any other snail species or kill animals indiscriminately.

In fact, in the next article we will discuss an ethical concern or problem involved in the extermination of snails, especially since this method of killing them has been interpreted by some as "excruciatingly painful" and "inhumane". We shall see.

Come on using beer like that isnt good !! Use salt lol
!1UP

LOL, how did you spot that so fast?

Woah! snails serve as meat in Nigeria. I didn't have the slightest idea that any of them were poisonous or unsafe. I guess the people who eat them know the difference or the bad one's just aren't here. I'll be on the lookout...

Salt? Science is really cool. I only knew about earthworms...

Well, humans have managed to deal with dangerous things and get used to it. I'm glad you learned something from this read.