My little Dendrobium is killing it this year! I have two orchids that I will keep even if they decide not to bloom for me.
Both are dendrobium types. Both produce very nice, fat canes and very stiff, thick leaves. I like the plant itself even without flowers. One still didn't bloom, but I know it has to be bigger and much older to produce flowers (Dendrobium speciosum - google it if you want).
The second one is right here :) Yes, it is a cross between Dendrobium jenkinsii and Dendrobium aggregatum. Both are very similar with the same shape of canes and flowers. Aggregatum one is larger one though and likes to produce cascades of flowers. Jenkinsii is a true miniature with short flower stems with usually just one bloom on, smaller canes and I think I read somewhere it is more fussy.

The cross created a medium size (though it is still considered a miniature orchid) plant, but with many flowers. Yay!

You can see below one of the long spikes hanging down. I do not stake them - I like them this way. But I had to build a little tower to make sure they do not touch the floor.
There were two of those long spikes this year and a few shorter ones (comparing to the previous blooming that had just one short one). One of the big ones already dropped the flowers. This was the last moment to photograph the remaining flowers.

I know it is a lot of yellow, but I couldn't stop shooting. The flowers are just adorable! Not very big - maybe 2,5 - 3 cm across. And if you know African Violets flowers (which are a lot more common than this plant) and know, that texture on the petals is about the same. They are very thin and delicate.

On the photo below you can also notice some little drops on the stem. This is very sticky sap that they produce. Nothing to worry about though...

Professional orchid growers refer to this clear, sticky sap as “happy sap”. The sap that is naturally produced by the flower itself is thought to do so in order to attract pollinators, which results in sticky orchid leaves which can drip a lot. If this is the case, the sticky stuff can easily (but gently) be washed off with water and is no cause for concern.
source Newley open flowers are light yellow. I didn't catch that as they were already starting to fade now. As they get old they change colour to this intense yellow with dark egg yolk center.
No fragrance. But I don't care :) This is the whole plant now. The leaves are super thick and stiff. They do not bend or wiggle. The canes are short and fat as I mentioned. It does tend to shriver when it is not watered enough, but they can plumb back. They will also look like rasins during the winter rest. This one does require the cooler winter time with very little water in order to bloom. A bit like cacti :) Much smaller plant and one, not too long flower spike. I was still very excited to finally see it as it was blooming for me for the first time.

It was growing one of the smaller posts - 10 cm I think. Last year I repotted it to the regular 12 cm. It skipped blooming, but was growing like crazy. Multiple new canes and it filled up the pot again. I will wait for next spring to see if it needs repotting and maybe splitting. It is getting pretty big (for its small size). wow what a beautiful orchid, this is my first time seeing an orchid like this

Thank you! They are nor the most popular ones.

Don't do this please, I don't want to get hooked on orchids! haha, the pictures look great!

Hahaha. Why not :P

Lovely orange orchids! Wish I could find these here.

Hopefully one day. They are so worth getting!

Hello dear friend @ewkaw good morning
It's good that some of the orchid plants that didn't give flowers started to give, beautiful flowers, I really like their egg-orange center.
I appreciate you sharing all this information.
enjoy the weekend

What's the trick to watering these? I hear very little or put an ice cube in there once a week for a drip watering type method.

I buy orchids and they look lovely for a short amount of time and I end up tossing them out a few weeks later as they don't seem to last. My hoof isn't particularly green so maybe you have some tricks you can teach me?

I don't often see the ones you have here on display. They're lovely

The ice cube thing is bullshit :D I don't know who made that up, but it just another one of those fashionable hacks that don't work.

What's the trick to watering these?

It depends which one. Some like more water, some less.
I am guess you mean the Phalaenopsis that are very popular.

The easiest way is to flush the bark under the sink, let it drop for a bit and that's it :) Just make sure you do not leave any water on the leaves and in that gap between the leaf and stem. Also no water in the crown. They will rot.
I keep them in those white covers, so I just fill them up with water and leave it for about 1h. Then remove all the water and that's it :)
Phalaenopsis are easy to water as the roots will tell you when it is time. All depends on the bark, temperature and size of the plant. When the roots turn light grey\green - time to water. When they are bright green - they are still wet and do not water. They do need dry up between watering so water only when the roots turn grey. And that's it :)

Here is a good example of watered and dry roots. When they look like the ones on the right - water them. 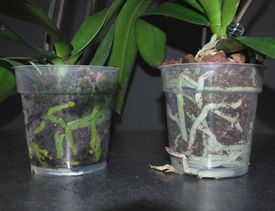 Thanks for the extensive response, it is helpful. I had one where the leaves were green but shrivelled up looking like a 100 year old wrinkly grape one time.

I'll be set for round 127 with these orchids, that's the lucky one I know it 😀

Good luck with it!

I googled Dendrobium speciosum, it blooms great!!!!!
I have never seen such a Dendrobium for sale!

And Dendrobium jenkinsii x aggregatum has a very beautiful bloom!
I haven't seen this for sale either!

I bought both of them in an online nursery some years ago. I have never seen those on sale in normal shops. I can't wait to see the Speciosum in bloom!

I'm also interested in seeing photos of the flowers!

wow i recently saw a yellow orchid which has such incredible brightness in my area there are usually only ordinary orchids that I have ever seen. thank you friend @ewkaw for giving us beautiful pictures