Is Crypto A Scam? 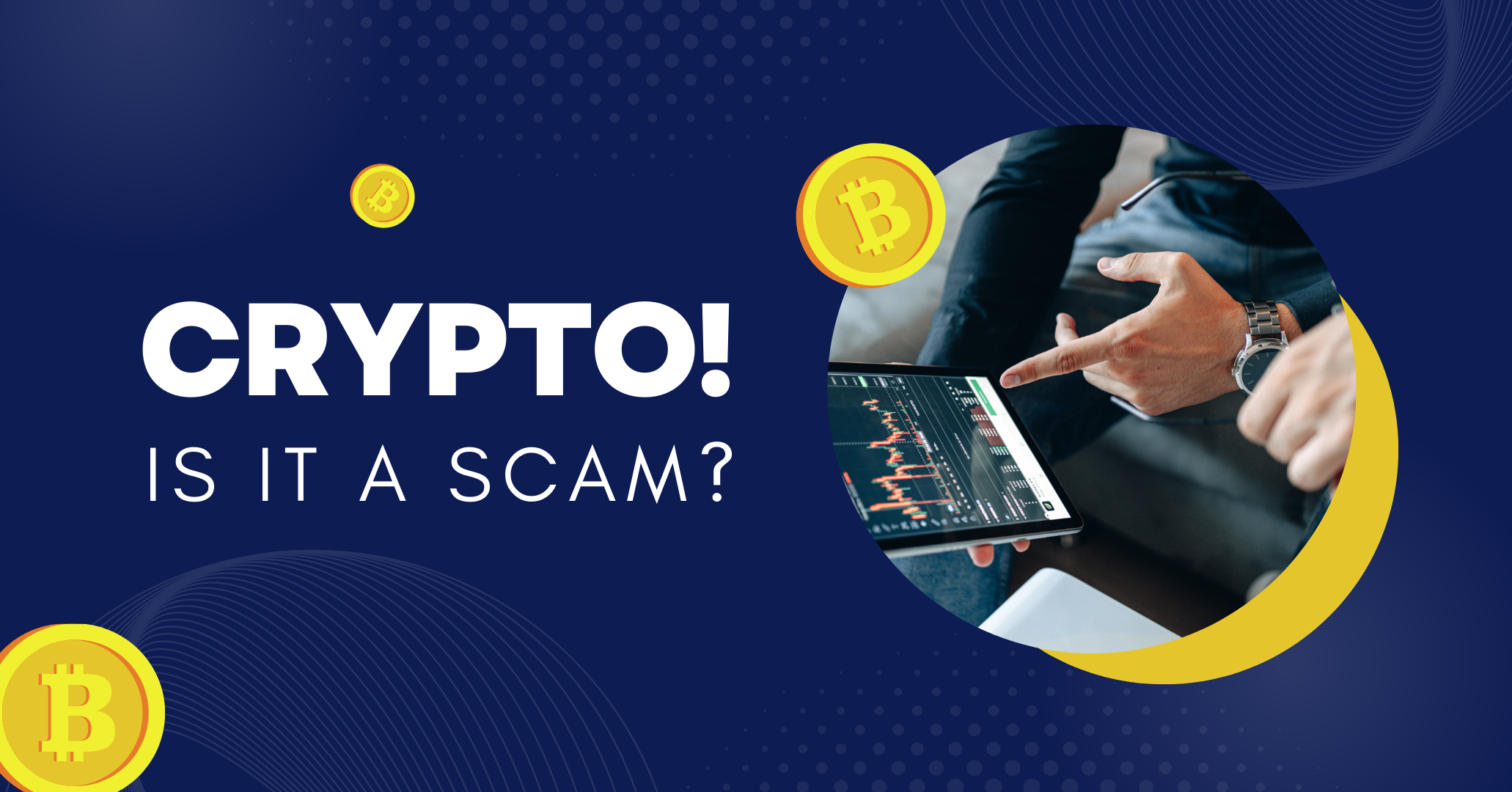 It's a question that has been asked over and over again: Is crypto a scam? While no one can say for sure, there is definitely some truth to the allegations. The truth is that cryptocurrencies are still very new, and they do have their risks. But as we've seen over the past decade or so, they also have huge potential and will likely change how we live our lives forever.

Yes, there are scammers in the crypto space

A scam is when someone tries to take your money or identity. It's a way for people to steal from others, and it hurts everyone involved. Now tell me if scams don't exist in the fiat world. Well, the reality is that they do. Scammers are everywhere. You just need to learn how to avoid them

How do you spot a scammer?

The best way to avoid getting scammed is by being careful about where you send your money and who you trust with it (or anything else). You can also ask yourself: "Is this person telling me the truth?" If an investment sounds too good to be true, it probably is! Look at investments carefully before making any decision. Never ever click any link you get from random people in the DMs or on social media websites. Also, keep in mind that some people will try to trick you into giving them money by offering free coins or tokens; these offers are usually scams!

What should I do if I've been targeted?

If someone has tried to scam you, just block that motherfucker. Also, do a complaint to your local cyber cell and try to stop them from scamming others.

Scammers abound on the internet and in real life too! But just because a scam exists does not mean that all crypto is a scam or even that most of it is. In fact, if you've read this far, you're probably more interested than confused about how to use cryptocurrency safely and properly for yourself or for your business!

Yes, you can lose money trading and investing

The answer is yes. You can lose money. The word “can” is the key here, because there are many ways to lose money in this world of ours. You can lose your wallet on a bus and never see it again, you can drop your phone in the toilet, you could hit your head on something and forget who you are - the possibilities are endless! You could also get sick with a chronic illness like diabetes or cancer that requires expensive treatment for years or decades to come.

All jokes aside (I hope), crypto is an incredibly volatile market which means that there will be times when prices go up and down rapidly within short periods of time—and if you don’t pay attention and sell at the right time...well...

There’s a reason why crypto is unregulated and that is because it is very difficult for governments to keep up with the fast-paced development happening in this space. This means that if you buy bitcoin or any other cryptocurrency, there is no one to complain to if your funds are lost or stolen by a hacker. You can try but it would only waste your time and money and mental peace.

In addition, since crypto doesn't rely on any single entity or institution for its value—and because most cryptocurrencies aren't backed by real assets or utilities — the price of these currencies can be extremely volatile compared to their fiat counterparts (like the dollar). That's why many people feel like using cryptocurrency is gambling rather than investing in something with true value. Does that mean decentralization of power & money is wrong?

No, there's nothing inherently wrong about decentralization.

It's a core feature of cryptocurrencies and has many benefits. Decentralization is a way to reduce the risk of a single point of failure, censorship, and fraud. If you're familiar with the internet, then you know that it's decentralized by design. This means things like DNS (Domain Name System) servers are distributed all over the world instead of having one central server that could be easily targeted by hackers or governments.

No, Bitcoin is not a Ponzi scheme.

If you’re still wondering if cryptocurrencies are a scam, the answer is no. Not all cryptocurrencies are scams or ponzi schemes or pyramid schemes. Cryptocurrencies are digital currencies that are used like cash online and offline. With cryptocurrencies like bitcoin (BTC) and ethereum (ETH), it’s possible to send money around the world almost instantly—without paying high transfer fees or using an intermediary such as PayPal or Western Union; this has led some people to call crypto “the Internet of finance.”

Due to its decentralized nature, meaning that no one entity controls it, many investors believe crypto will change the way we think about money forever. That's been enough for some people who have made millions from investing in bitcoin at early stages when prices were much lower than they are now; however, others see them as little more than tulip mania 2.0 or worse: Ponzi schemes with no real underlying value.

Crypto has lots of benefits and could be the future of money. They are not just an alternative to fiat money, they’re a better alternative. Much like how blockchain technology has changed so many industries, cryptocurrency will change the way we think about money for decades to come. It's important to remember that cryptocurrencies are still in their infancy and are subject to a lot of hype. And this hype can lead people astray. But that doesn't mean that crypto is bad or evil or anything like that; it just means there will always be thieves out there trying to take advantage of others who don't know what they're doing. That's why it's so important for anyone who wants to get into the space (and especially those who want to invest money) to learn all about how things work before jumping into anything blindly!
Follow: https://leofinance.io/@finguru
Twitter: https://twitter.com/finguru6
Discord: finguru#4062
Not financial advice. For infotainment purposes only.

Great post and at the end of the day, these approaches are just as important across the board.

It’s easy to make crypto the boogie man, because folks don’t understand it or just go by what other’s say without doing their own research.

We’ve been dealing with scams and scammers for years way before crypto was even a big topic of conversation.

Crypto is a scam for those who got scammed and didn't learn from their experience. You need to give it a little time to understand how it works and then make a judgement.

I was just talking to someone this weekend about how they got scammed in crypto. It was an older guy and he is interested in the space.

Most platforms - like Coinbase, Robinhood, etc. - do this and those are obviously okay but then he started downloading more fringe apps offering the same things. One ended up being a pyramid and it collapsed, stealing all user funds.

Gotta stay safe out there and DYOR!

That is why I check hundreds of times before downloading a new wallet or software on my laptop. I hope the guy learned the lesson. I got scammed too at the starting. Used my bitcoin to invest in Bitconnect and lost around $1000. Since then, I have been cautious.

The next question that inevitably comes up is what gives Bitcoin value?

The best answers keep it simple and use terminology that normies can understand.

Keep up the great work!

Thank you so much Dane. I always try to simplify everything while writing.

Just the way you did with your Bitcoin article.

like anything else, there's scams everywhere any unethical person can exploit

Yepp! Scams are not going anywhere.

I agree with you my friend their are scammers everywhere and one need to be very careful about them ,not very link you click verify them before you click and also not all that glitters that is gold some of this scammers will come with an offer that will look like they want to do you a favor but it is not
We all need to be sensitive and watch out for then .thanks for shearing this important and informative post with us

You are most welcome mate. All this comes with a responsibility to stay vigilant. Everyone can be hacked.

Sure I agree with you do have a wonderful day @finguru

Yes crypto is a scam, it's unnecessary complexity used to enrich founders who create tokens and nothing more than that, what innovation has crypto brought that we cannot do without? Stablecoins? Putting fiat on a blockchain wow, lol it's a joke

None of this stuff works, none of it is decentralised, none of it makes a lick of difference to the product. Look at this site, if you stripped out the chain, and the token no one would know the difference.

My only argument while everyone is focusing only on making profits, there are a few projects who are actually building stuff for their community. I agree that performance and scalability issues are there and it might take another decade for us to make something of quality at par with the current Web2 platforms. It's gonna take time but that doesn't mean whole of crypto is a scam. Also, we don't want extreme decentralization in everything. Only wherever necessary and gradually we will reach at a level where one entity won't be able to control within a given network.

Good post! Some many scammers involved in this space and some quite clever schemes too. But is crypto being a scam as a whole? Like you said, no. Every time I hear someone say that I just think that individual doesn't know what he is saying. It's like declaring that the internet is a scam. Still we hear that a lot.

Well, I fell everything is a Ponzi Scheme, you just have different “levels”. Yes Bitcoin, Real Estate, stocks and FIAT are Ponzi schemes but they are not the same kind as Bitconnect, etc…
I believe this current market will purge the market of 70-80% of scams while 20% of the more hidden scams might get by it and still be there for the next BullMarket unfortunately.

Scams are definitely not going anywhere. Just need to learn how to dodge them. Our safety is in our own hands and that's a huge responsibility to take.

Thank you so much @onealfa. 🙏

This is really a great Post.
There are scambers everywhere not just on the Internet but also on the street. Any business thats appears to be very easy is a sign of scam.

There's still a lot of misconception about cryptocurrencies and only popularity and articles such as this can change that narrative.
Great article