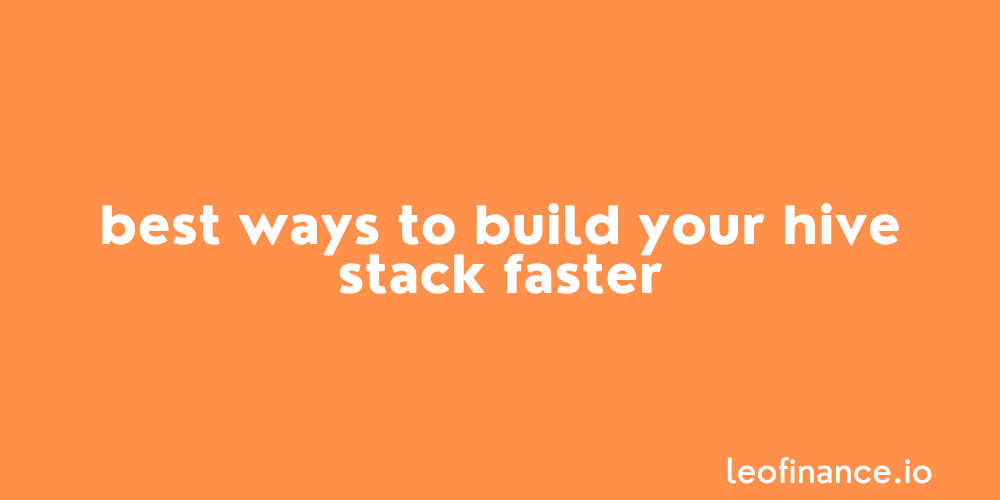 We take a look at some of the best ways to build your HIVE stack faster using LPs.

Are you trying to build your HIVE stack faster?

In today’s LeoThread, I took a look at some of the best places to put our HIVE to work. 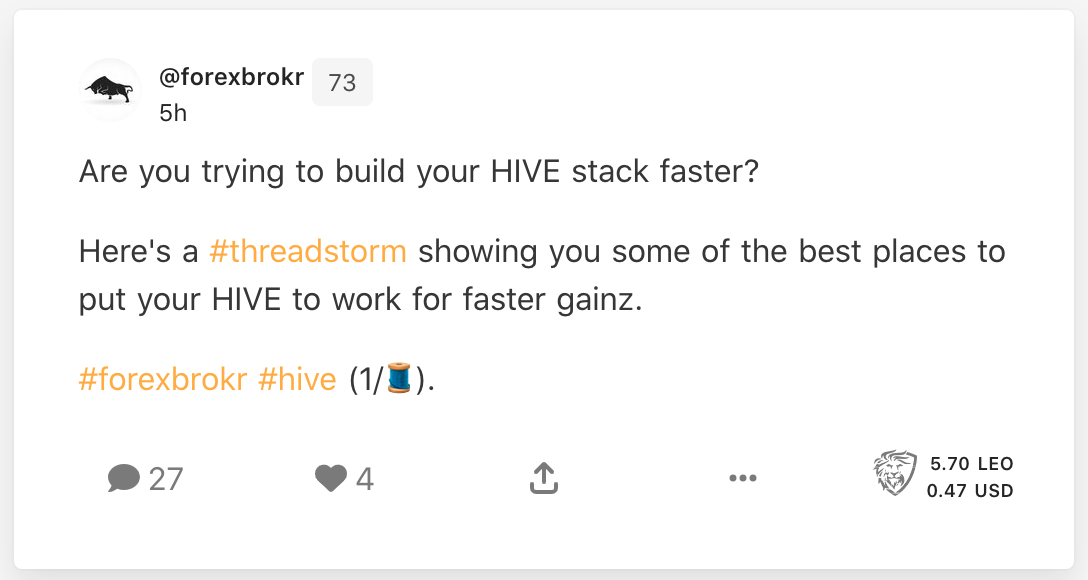 Staked HIVE in your LeoFinance wallet, currently offering: 3% via inflation as well as another 10% via curation rewards. 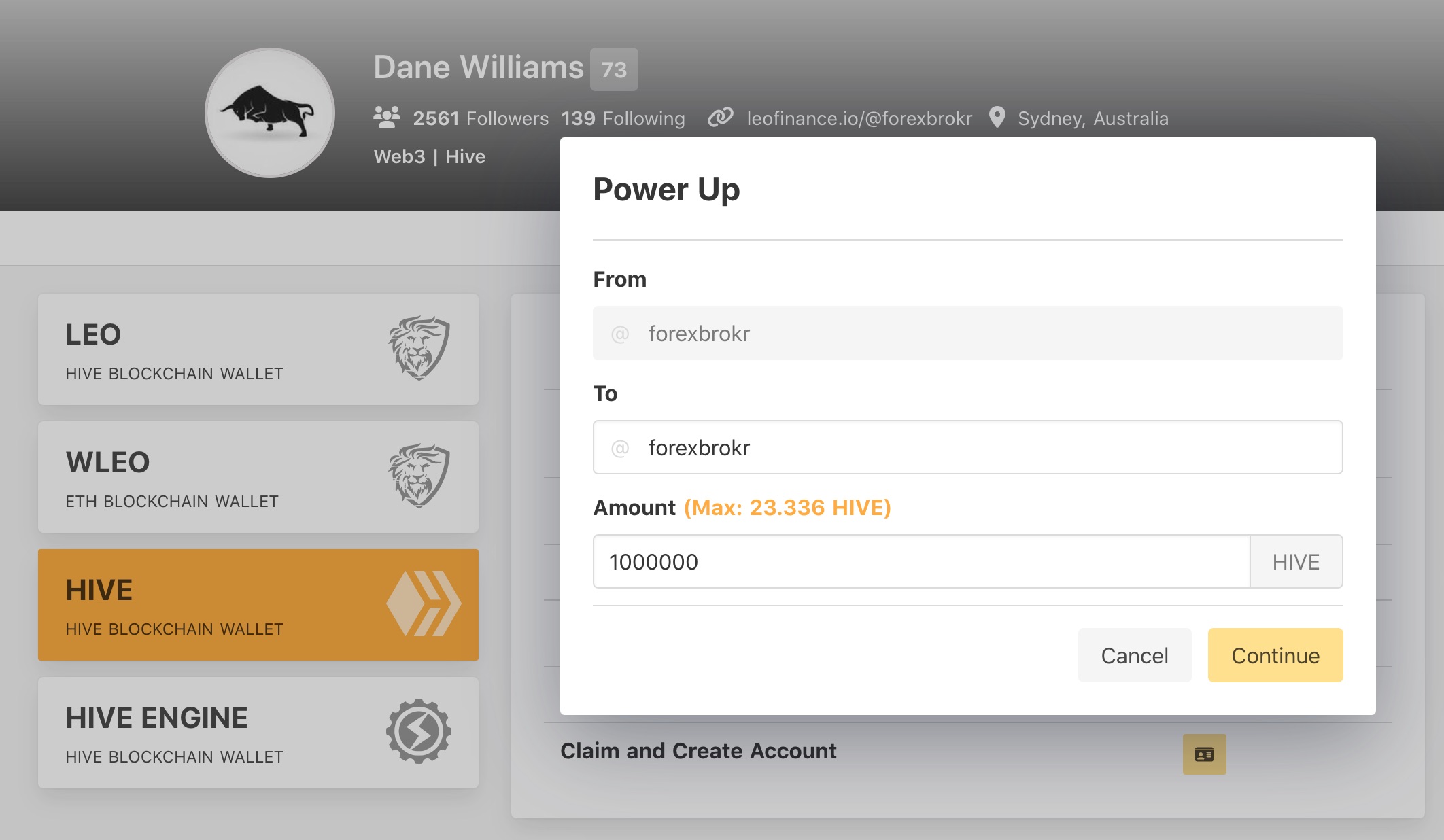 For me, the ability to securely stake your tokens and earn rewards is the most underrated aspect of Hive.

If you don't have time to curate but still want a safe, simple 10% return on your HIVE POWER, then follow someone else's curation trail via hive.vote

Wrap native HIVE into BSC compatible bHIVE and then pool with CUB for a 55% APR. https://wleo.io/hive-bsc/

If your end goal is to stack HIVE, then track your impermanent loss and keep selling your rewards into bHIVE.

Wrap natve HIVE into Polygon compatible pHIVE then then pool with POLYCUB for a 30% APR. https://wleo.io/hive-polygon/

Just like CUB, the POLYCUB token is extremely risky to hold, so track your impermanent loss and keep selling your rewards into pHIVE. 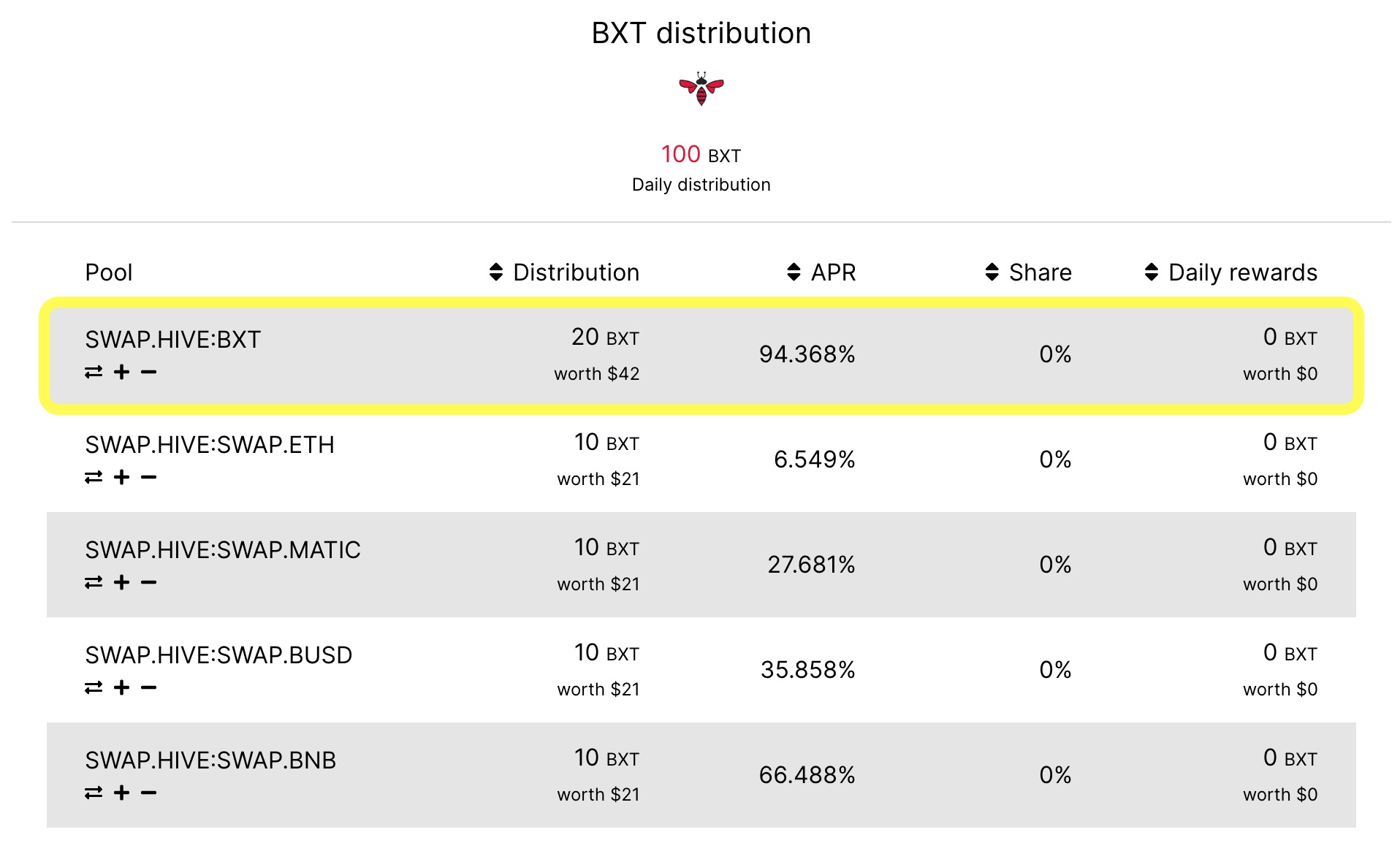 BeeSwap is technically just a Hive-Engine front-end that displays their native Diesel Pools.

But on top of the rewards offered for providing liquidity to Diesel Pools, BeeSwap also pays BXT rewards for 10 LPs.

I have featured the SWAP.HIVE:BXT LP because it has a HIVE side and offers the highest APR.

But I encourage you to look at the other LPs featuring BXT rewards to find the best fit for you.

While this is just a regular Diesel Pool, Splinterlands are offering much higher APRs than you see on the other front-ends.

These APRs are insanely high and certainly won't last forever, so grab them while they're hot.

Any of these LPs can be used to stack HIVE faster than simply holding.

Just make sure you weigh up the risk:reward on offer for each before going all in on an LP.

Impermanent loss can certainly fuck you.

Hmm... They all look risky.

But I have a few cubs and hive but I won't be using any of my liquid capital from outside to find this venture.

SPS and hive is something I am looking at

Then cub and hive.

The level of risk you want to take in order to build your HIVE stack is completely up to you.

If you want low risk, then simply take the 13% for staking and curating.

If you want to try and stack faster by risking a portion of your portfolio in LPs that offer higher APRs, then there are options.

Just gotta find your own balance that you're comfortable with.

No risk of impermanent loss and compared to bank interest it's a HUGE return haha.

Just bookmarked this so I will remember to read whenever I get home from vacation next week. I know you will have some great recommendations as always.

It's just all about weighing up the risk:reward between:

Thanks for stopping by mate.

What is your opinion on using these LPs to stack HIVE faster?

To be really honest, I was really excited about LP in the past (even wrote some posts about them and all that jazz), but I'm becoming more and more reticent about them.

My main problem with them is that those high APR usually run out faster than expected as everyone flocks to the few pools with high APR; and then you usually end up receiving lots of shitcoins as rewards that you can't even liquidate.

I personally put lots of money on LPs, and ended up losing money in the majority of the cases due impermanent loss + rewards being paid in not-so-good tokens...

Yep, this has pretty much mirrored my experience with DeFi.

I'm now extremely picky with the LPs that I go into, dump all rewards into HIVE as I earn them and use DeBank (or BeeSwap if they're Diesel Pools) to monitor my impermanent loss like a hawk.

These are not technically LPs but buying some EDS Miners (EDSM & EDSMM) get you EDS tokens which then pay out weekly in HIVE. APRs are over 20%. It's a long-term play but I've been doing it for over a year now and it just keeps building slowly but surely.

Also, holding SIM Power in the dCity game can give you some passive HIVE as well as holding packs or CROP in the dCROPs game. I'm picking up 2-3 liquid HIVE every day from those games.

Just thought I'd add that on to your list.

As someone previously stated, the "interest" you get for powering up your HIVE combined with the curation returns are really a great way to keep building. It doesn't look like much, but when you do it for a few months and look back it's pretty amazing how much it's actually building.

I love it because if SIM goes down and you lose SWAP.HIVE to impermanent loss, you end up gaining more SIM Power.

Are you in any pools?

What's your opinion on using them to stack HIVE faster?

Does the reward outweigh the risk?

I have been doing some pools to get more of the BXT token over the past couple of months. It has been a really good one to hold since it pays you dividends in Hive.

While I featured the SWAP.HIVE:BXT LP in the post, you can simply stake your BXT and earn HIVE rewards for doing so.

IF you are happy with the risk of 100% of your position being in BXT.

The current 33% APR paid out in HIVE is certainly nothing to scoff at.

Staking BXT is enough to allow one to earn daily drips of HIVE. BXT isn't cheap, but the reward in HIVE makes it worth buying to stake and HODL.

How is the percentage of Hive returns calculated?

Also, is there a special treatment for either staking and just holdling?

The daily drips of HIVE result from BXT which is staked. Liquid BXT won't be enough.

As for calculating the percentage of HIVE returns, I don't know how the calculations are done. If anything, I was going to convert all prices to HIVE first before calculating returns.

From the BXT whitepaper:

Staked Beeswap Token(BXT) will earn 50% of all the fees generated by BeeSwap, currently estimated at 50k hive yearly.

So as magna said, you need to stake your BXT in order to receive HIVE rewards which are currently paying out at 33% APR.

Thank you so much for doing this Dane. Juicy APRs xD

But I just have to stress that if you're trying to build a HIVE stack, putting HIVE into an LP puts you at risk of impermanent loss.

Just gotta monitor your positions like a hawk and dump rewards back into HIVE as they come in.

I think staking and curation on top of author rewards are the best way to go. The rest all require some pairing to other tokens so it depends on how well the other tokens move.

It all depends on how quickly you're trying to stack.

The quicker you try to build, the more risk (in terms of impermanent loss) you have to take.

I would just add BXT staking but it does require you to swap Hive for BXT.

Great list. I had no idea you can find pools on Splinterlands now.

Yep, I'm a huge fan of BXT staking because it pays out daily in liquid HIVE.

But like you said, it's taking a bigger risk because you have to hold only BXT.

As for the Splinterlands pools, they're exactly the same ones you find on Hive-Engine.

They just show that higher APR paid out in SPS rewards - Something you don't see via the other front-ends.

A single staking vault would be great. Impermanent loss is always a concern with LPS. A few good opportunities though... if you meet the risk profile.

HIVE's single staking vault is pretty much powering up and then using hive.vote to automatically curate.

We were DeFi before DeFi was cool ;)

My plan was just stake my Hive and Leo to my wallet (originally) as I am not that well versed in Liquidity Pools etc. Probably I am late in the party but I will bookmark this for now and see what I can digest and try with a little amount that I have in store.

It will be risky for sure but might as well try it to experience and learn!

I mean earning the 13% just for being powered up and voting on posts is nothing to scoff at.

Then you can use the final 20% of your tokens in more risky LPs (because you're risking the possibility of losing your HIVE to impermanent loss) to try and earn a higher return.

I mean earning the 13% just for being powered up and voting on posts is nothing to scoff at.

Agree - this will be a numbers game again haha I hate it.

Then you can use the final 20% of your tokens in more risky LPs (because you're risking the possibility of losing your HIVE to impermanent loss) to try and earn a higher return.

Need to study this seriously - 20% isn't that much right now since I am just accumulating tokens so it is feasible.

Thanks Dane for the insights! Appreciate it.