Crypto influencers complaining when they're banned from Web2 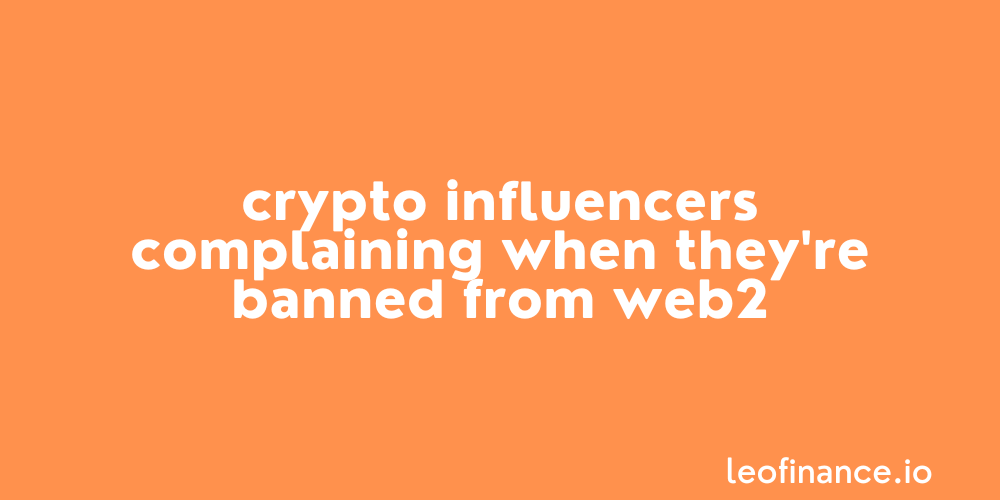 I’m surely not the only one that finds it ironic, not to mention downright hilarious, when crypto influencers not only get banned from these platforms…

…but then HAVE THE AUDACITY to complain and cry how it’s so unfair they can no longer do business blah blah blah.

Now I don’t want this to come across as a hit piece on crypt0 because I love the bloke’s work.

I can honestly say he played a huge role in me falling down the crypto rabbit hole that I’m now firmly buried within, so thank you!!

But the way he handled his unceremonious ban hammering by YouTube is a prime example of what I’m talking about here.

Just take a look at Omar’s Hive account which he normally uses for nothing more than sharing links to his YouTube videos: 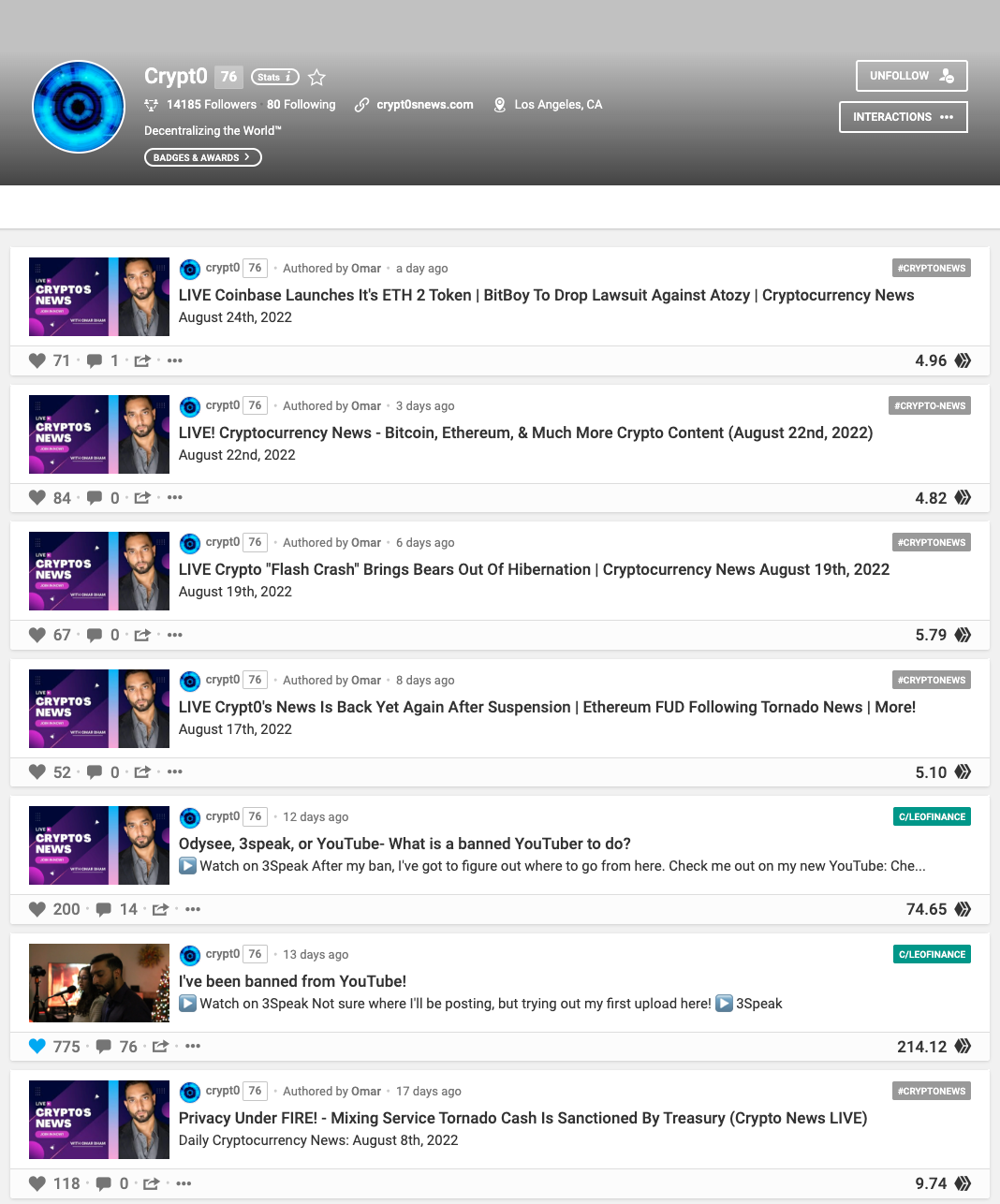 So Omar shares a post that he’s published a YouTube video on Tornado Cash that talks about the importance of censorship-resistant money and cops the ban hammer from YouTube.

Being banned on YouTube, he then highlights the importance of onboarding his audience from Web2 to his Web3 Hive account because suddenly it becomes the only place to message them.

He follows this up with a 3Speak (Hive’s video dApp) video asking what he should do now that YouTube decided on a whim to rip away all his followers and thus his ability to do business.

Obviously the answer is that the risk of losing his ability to do business on Web2 platforms like YouTube has become too high and that it would be a sound decision to shift his focus to building an audience he owns.

You would think that seems like common sense for a crypto YouTuber who has seen his business literally snatched from underneath him.

You then see there’s a day’s gap where he’s obviously talking to YouTube and there’s no post.

The audacity of crypto influencers who complain

I mean come on…

Wouldn’t common sense tell you that you just got a glimpse into the exact future of social media?

The future that you’re literally talking about on your channel every single day, mind you.

Yet Omar’s reaction is pretty much what we see every time a crypto influencer is banned from their Web2 account.

We saw it here, we saw it when Bitcoin Magazine were banned by YouTube and we will seemingly keep seeing it as more influencers get the chop.

Seriously though, explain to me how influencers can honestly be mad at YouTube for banning their channel?

They’re literally using another’s platform to tell a vast rented audience (no, Web2 followers are not yours) that there is alternative tech that offers freedom from data slavery.

The utter audacity from these guys, haha!

They don’t actually care about reaching the goal of censorship-resistant money or speech.

All that they care about is their bottom line - in US dollar terms.

Nothing more, nothing less.

Now I’m not saying this is a bad thing, because it’s not.

Each to their own.

But there is certainly no room for decentralised ideals in the social media influencer game and you as a consumer of their media, would be wise to wake up to this fact.

The reality of crypto influencers

The reality is that crypto influencers don’t care about the decentralised parallel like they say.

Instead, they’re simply interested in using crypto to build a legacy business.

Again, I don’t want to make out like it’s a bad thing, because it’s totally not.

But let’s just be honest about what is really going on in the crypto influencer space and if we can’t even get those actively preaching to start shifting their business to Web3, then how can we expect regular businesses to give a fuck?

We still have a LONG way to go..

This is spot on, 100% how I feel. To add to this, the next time someone else gets banned, I will have zero compassion.

It is super frustrating to see, I know.

But all we can do is encourage these guys to see the long term benefits of onboarding their audience to Web3 socials.

There are plenty of Omars in the crypto space, but the hypocrisy to the story is the whales upvoting that I got banned from youtube video to $200. The truth is many of us in crypto don't give a shit about fundamentals and are more inclined towards money making.

This is why I've said I don't blame influencers for using Web2 socials to build a legacy business.

It's where they can make the most money right now.

I like money too haha, so of course don't blame them for having a Web2 presence to fish where the fish are, so to say.

But as Omar saw before he was reinstated, if he can't market to his audience because he's been deplatformed, then he can't make any money.

Hence its good business to mitigate this risk by onboarding his audience to a Web3 account running on a decentralised network, that he own the keys to.

Then at least pay it a little more attention than he is.

The only viable solution that ticks all the boxes right now being Hive.

We desire decentralization but look the other way when it presents itself. Not only influencers but some average joe who wants to be in control and when control presents itself he has no idea what to do or sometimes it's too much work, Omar sees building a web3 following as work and prefer the big following of youtube.

Fair enough, fish where the fish are.

But I would really encourage content creators like Omar to give their Web3 accounts a little more love than they currently do.

He's had a taste of what it's like to be deplatformed by a Web2 network.

Something that can't happen on a Web3 Hive account.

Hive is on its way to becoming the ultimate social media medium. It is possible to do microblogging, blogging, vlogging, and photo sharing with a single account. SPK Network will provide solutions for distributed storage. Tokenized community infrastructure will evolve.

On the other hand, Web2 social media sites have the advantage of scale. They can use machine learning effectively in their content recommendations.

I don't think influencers even know about the possibilities Hive provides today. Even if they knew, they would have continued there because, as you pointed out, the broad audience is on web2.

Maybe a crypto influencer onboarding campaign can be run by allocating a budget from the Hive Decentralized Fund. I don't know how effective it will be, but at least they'll get to know the Hive.

You're spot on that Hive at least has the ingredients to become the ultimate social media medium.

But without a huge audience present in our own communities (we're tiny compared to the total reach they can get on Web2 platforms), I'd advocate for just starting to onboard as much of that following as they can.

Hive's immutable properties will ensure that even if they are censored or deplatformed from Web2, they will ALWAYS have access to their audience via their Hive account.

It's just smart risk management for a content creation business.

But further to this, Hive is much more than a blogging platform.

On the back-end, it is EVERYTHING.

We just need front-end devs to start to see the potential here and build.

Because right now from a front-end perspective, even I have to admit that Hive is pretty lacklustre.

And that's being kind...

Maybe a crypto influencer onboarding campaign can be run by allocating a budget from the Hive Decentralized Fund. I don't know how effective it will be, but at least they'll get to know the Hive.

Lol at the DHF.

Every content creator should have a Hive account. It would be wise to take the related Hive name. Unlike name service of Eth it is cheap and there is no time restriction.

Hmm.. I guess you may be right. But again we shouldn't be judging anybody coz we don't know what they think from inside.

This isn't a personal judgement, this is a discussion about business.

Content creation businesses like Omar's make money from being able to put an offer in front of their audience.

Something they can't do if they are banned from Web2 socials.

This is where I say we need to stop voting on people like this who just look at hive as a secondary ATM machine. It's nothing more then a sink on the network and they don't provide any value to hive. Perhaps if they powered up a majority of their hive, commented back to people on hive and curated I'd very much consider constantly upvoting their content. But the lack of all of that to me means we need to wake up and stop supporting such things with our vote.

If more people are going to treat hive/leo etc like a cash out option then ad revenue HAS to start being included in those figures otherwise it's a complete negative to the entire platform in terms of market cap.

No arguments from me.

I have a ton of thoughts and notes on the content side of Hive and LeoFinance which I'll eventually clean up and share when I'm ready to sacrifice my own rewards to piss off whales.

TL;DR being that it's a total dumpster fire that incentivises garbage.

The reality is that money blinds, it's money before any other thing for this influencers. I think in the past Hive has focused on some of them, in hope that they can bring marketing, they end up milking the system I mean haven't seen the impact of OMAR here, he's more of a double agent, I know they don't learn their lessons, no loyalty. It's just money

I don't expect them to drop their Web2 presence and focus entirely on Hive.

But it makes smart business sense to continue to onboard your Web2 audience that can be snatched from you at any time, onto a censorship-resistant Web3 Hive account.

We're good enough to date, but not to marry.

It's one of the reasons I was so glad to find this place after Blogger. I was in the process of downloading my posts once it hit me that I didn't actually own them.

Stayed away from blogging for a couple of years and then found the precursor to this place and have never looked back.

We're good enough to date, but not to marry.

Haha, I love this analogy!

These influencers are making use of Web3 tools but with a Web2 mindset, instead of using Web2 tools with a Web3 mindset. What we need to see is a shift in mindset. Until more of them are banned from Web2 platforms, that shift won't occur. Necessity is the mother of invention.

Unfortunately for those content creators and businesses who haven't onboarded their following from Web2 to Web3, it will be too late.

this is such a nice piece that really hits the nail on the head . They had better get on the ship sailing the decentralization way or they will always keep crying over spilled milk. I guess Omar realized this early enough.

I see you hit the comments too.

There was certainly some great conversation that stemmed from this post.