EOS community scores a win against the might of Block.one

@forexbrokr 72
about 1 month ago
LeoFinance 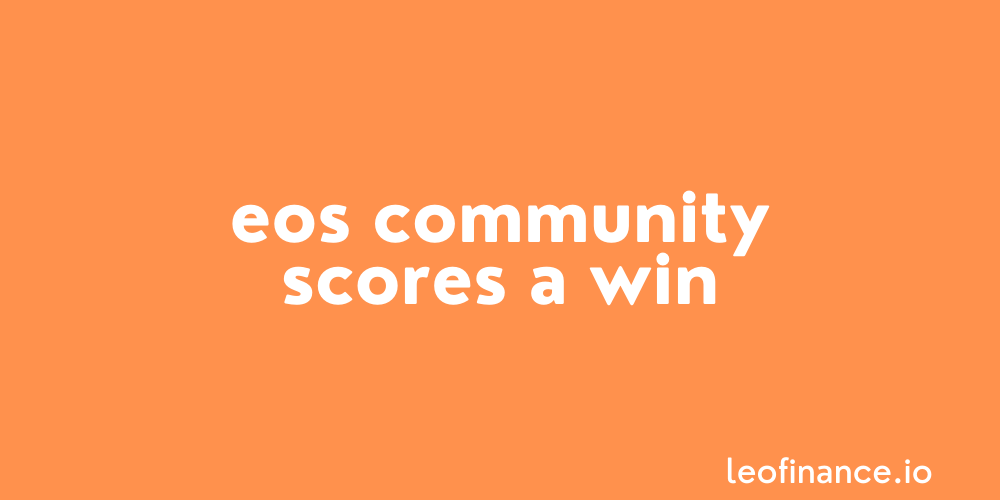 The EOS community has scored a win in their battle with Block.one, successfully halting the remaining 67 million EOS the network was set to pay them.

The latest battle in the ongoing war between the EOS community and Block.one has seen the points go to the community, after they successfully stopped payments of the remaining vested EOS being sent to their corporate overlords.

As the money behind Dan Larimer, the man who originally designed EOS and EOSIO, Block.one may feel aggrieved.

But you can’t launch a protocol that features a system of decentralised governance, do nothing but leave promises unfulfilled and not expect to be overthrown.

We saw it when the community forked Justin Sun out of Hive and we are seeing something similar here.

Bye Block.one, don’t let the door hit your arse on the way out.

The EOS community vs Block.one story so far

When EOS was first launched, 10% of EOS’s 1 billion token total supply, was allocated to Block.One, vested over a 10 year period.

As of right now, Block.One has access to 45/100 million of these tokens.

With EOS a clear failure, the EOS Network Foundation (ENF), led by CEO Yves La Rose, believe that by failing to make any meaningful headway for EOS, Block.One has failed in its agreed charter and should lose the rights to that vested stake.

In order to worm their way out of losing access to their vested stake, Block.One agreed to transfer ownership of those 45 million EOS tokens to Brock Pierce’s Helios.

While Brock Pierce may say that he is a community representative, he is an old corporate friend of Block.one’s and this was nothing more than a slight of hand that now looks up in the air.

"Through a super majority consensus, the EOS network has taken its future in its own hands by voting to fire Block.one and stop vesting tokens to them. This begins a new era for EOS and highlights the power of the blockchain to enable a community to stand up against corporate interests that don’t align with theirs,"

This all but seals the fate of Block.one, with the community now setting their sights on all aspects of EOS’s intellectual property.

But a word of warning.

While you may be able to win in the world of decentralised governance, you likely won’t have the same success in Block.one’s world of the corrupt corporate legal system.

EOS price reaction to the news

So what did the market make of the news that the EOS community has taken control?

You can see on the EOS 15 minute chart that the market liked the news. 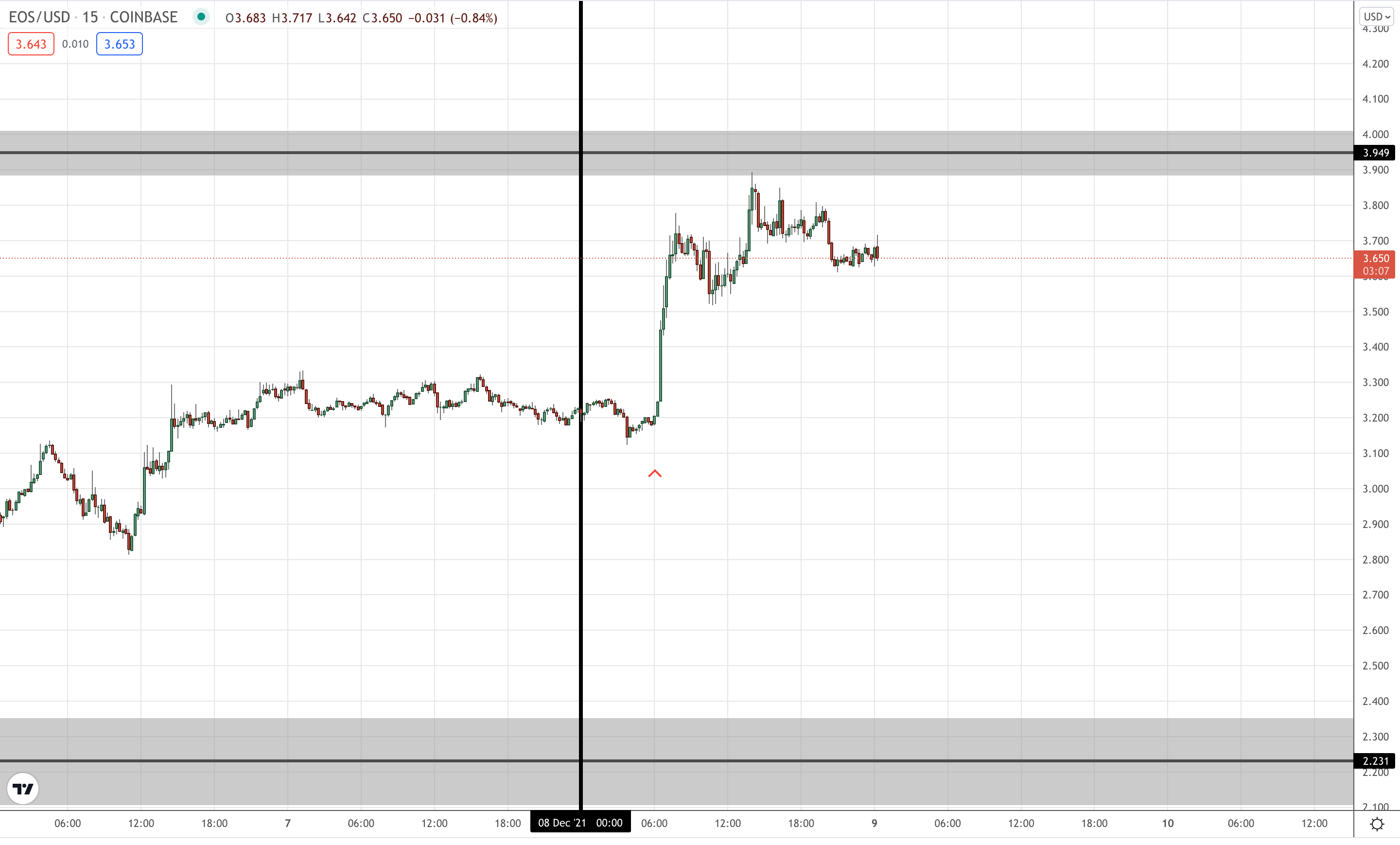 But take a few steps out to the daily chart and you’ll soon see how insignificant that price action is. 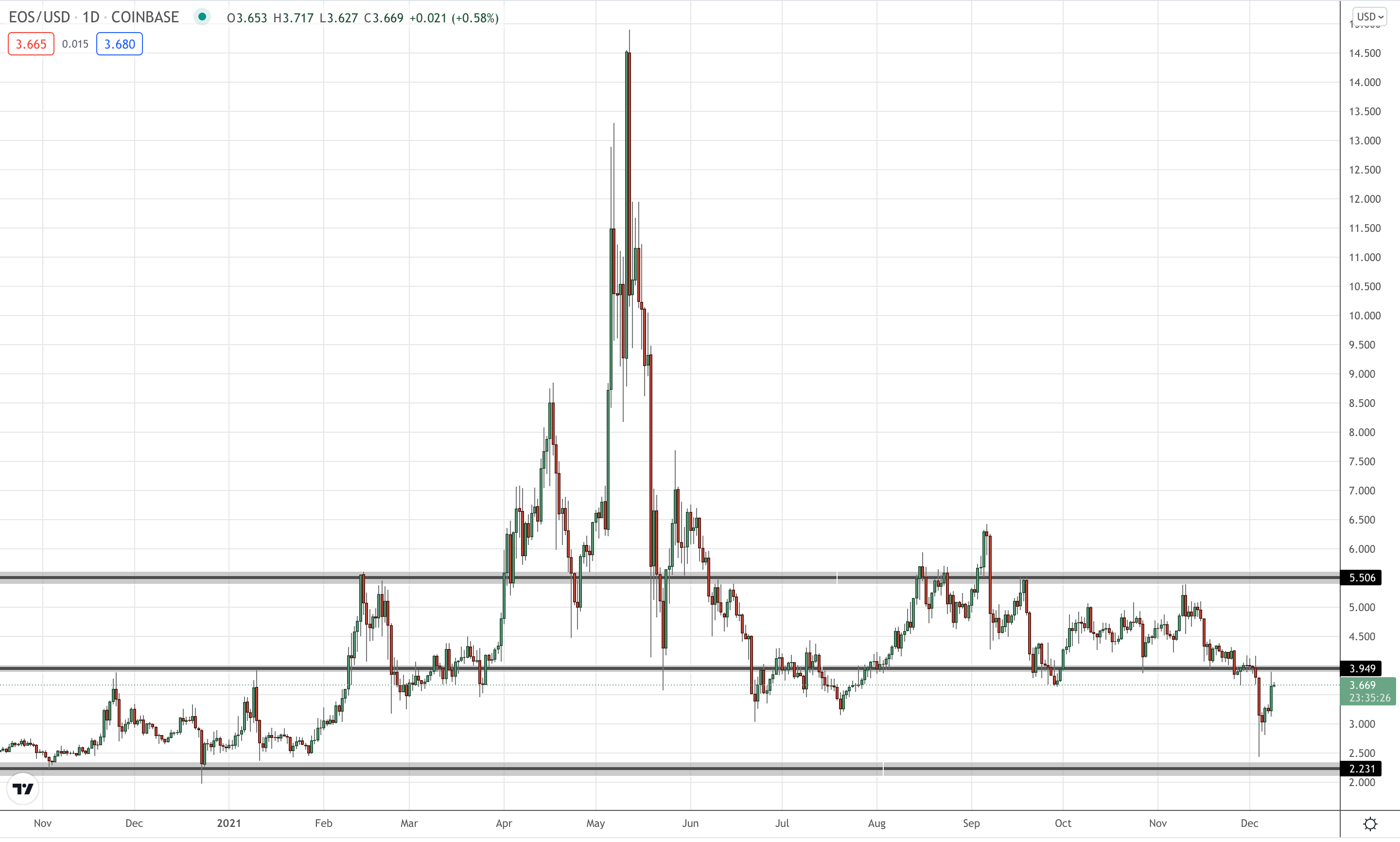 Keep in mind that this is in the midst of a market wide bull market where Bitcoin has actually made a new all time high this cycle.

Now that the community is in control, they ultimately have nobody else to blame but themselves if things continue to fail to go to plan.

Let’s see if they can be the ones to finally help EOS reach its full potential.

Why not leave a comment on what you think about the EOS community’s win over Block.one. All comments that add something to the discussion will be upvoted.

This EOS blog is exclusive to leofinance.io.

It's nice to know that the community won though. So at least companies need to show their worth if they want to maintain control in a decentralized manner.

I fully believe that this will happen to all of the top projects.

Beware of your community, lol.

Keep us updated, thanks!

It's a really interesting story that isn't getting the mainstream crypto media attention that it deserves.

Oh wow. What an intense battle. EOS hasn't performed well at all and failed in a lot of its project. Not sure if what their current plan is, is any good.

They should have thrown them out a long time ago.

@forexbrokr, thank you for this post on EOS. It was very useful to know. It seems that in the EOS ecosystem they are having a drama similar to the one with Steem/HIVE in early 2020.