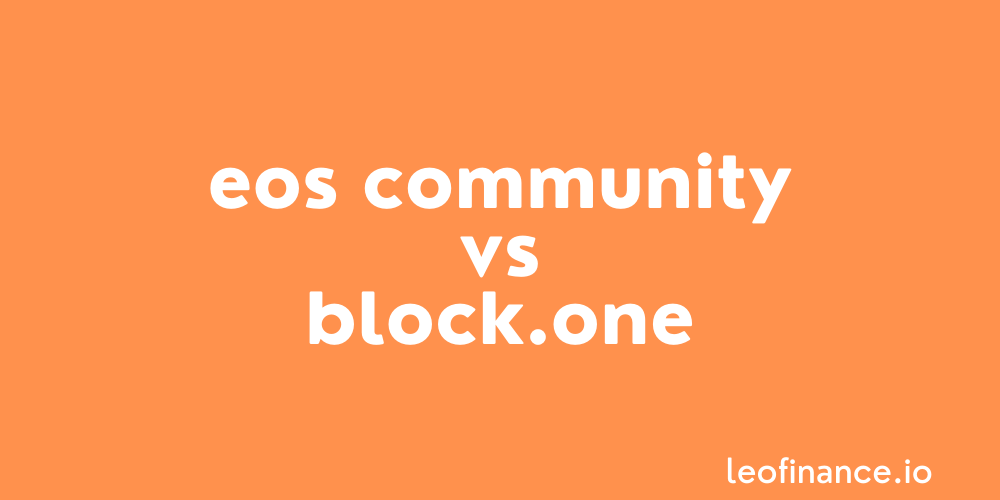 The EOS community is going head to head with Block.One, with a plot to fork out their ‘undeserved’ vested stake starting to play out.

Following on from the way our own community forked Justin Sun and Steemit Inc out of their own project by forking to Hive, the EOS community looks to be heading down a similar path.

The unfolding EOS community vs Block.One battle offers an intriguing narrative to follow and this blog is designed to add to the discussion.

Let’s get right into it.

Who is the ‘EOS Community’?

As we know here on Hive, it is extremely rare to find truly community driven crypto projects.

Unlike the Hive split from Steem which was driven by stake weighted voting within the community, what we’re referring to when we say the EOS community, is another closed foundation/organisation that say they simply represent the community.

This organisation is known as the EOS Network Foundation (ENF) and is led by CEO Yves La Rose.

While there’s no doubt that that La Rose has what he sees as EOS’s best interests at heart, I can’t help but question how you can call the ENF a true community representative.

There’s no doubt that the ENF won’t represent everyone and by calling a closed organisation ‘the EOS community’, I certainly have my reservations.

But this is where EOS is at right now and it’s the ENF who are certainly trying to lead EOS in an alternate direction to Block.One.

EOS is a failure

Honestly though, how else would you describe EOS in its current state as anything other than a monumental failure?

Just look at the following EOS chart as the rest of the market (even HIVE!) pushes toward or into new all time highs.

As things stand, the only winner from their pretty awesome, open-source EOSIO software, is Block.One.

All down to the fact they were able to raise $4 billion in their scammy as fuck ICO and then get rich off their Bitcoin holdings.

At an invite only virtual event which to be fair has only been very flakily reported on by those supposedly in the know, La Rose addressed EOS’s failure.

“EOS, as it stands is a failure,” said La Rose.

“What we are experiencing is a shift whereby the EOS community is placing itself in a position to be able to move away from Block.one, essentially forking them out.”

“This break is needed for a narrative and a branding shift to occur, so there is a clear delineation that EOS does not equal Block.one,” added La Rose, making it completely clear that his community backed foundation squarely blames Block.One for the network’s failure.

And with that, the battle for EOS between the community and Block.One begins.

Can EOS really fork out Block.One?

So with the relationship between the EOS community and Block.One now all but untenable, the validity of Block.One’s vested stake has come under fire.

When EOS was first launched, 10% of EOS’s 1 billion token total supply, was allocated to Block.One, vested over a 10 year period.

As of right now, Block.One has access to 45/100 million of these tokens.

With EOS currently sitting as the failure we spoke about in the section above, La Rose and the ENF believe that by failing to make any meaningful headway for EOS, Block.One has failed in its agreed charter and should lose the rights to that vested stake.

But then the biggest question becomes whether the community will and technically can actually fork out Block.One.

I’ve read a few headlines across the various crypto media platforms that talk about the community deleting Block.One’s stake.

But in blockchain tech, it’s not as simple as pressing the delete button and changing the agreed upon rules set out in code.

One option that the community always has is to fork the blockchain once again.

But as I also touched upon above, this is where we’ll find out just how much of the EOS community, this so called community foundation truly represents.

Either way, the waters are about to get really dirty in EOS land.

What’s next in the EOS community vs Block.One battle?

How this battle will eventually play out is hugely up in the air.

So now EOS has a community.

Then sitting between them and the funds, we have the centralised ENF who supposedly represent them.

And then between the ENF and the funds, we now have Brock Pierce.

Pierce has made it clear that he supports the ENF, but by acting as another buffer between a true community ownership model of the vested funds, I can’t help but continue questioning the validity of what’s happening here.

I encourage you to debate the validity of anything you read in this blog in the comments, or simply just to add your own 2 cents.

Why not share a chart or leave a comment with your opinion on the EOS community vs Block.One battle. All comments that add something to the discussion will be upvoted.

This EOS blog is exclusive to leofinance.io.

Well that is interesting :)
Something that hivers are familiar with.
I cant help but nitice that this is just a battle between two big players, EOS never seems to got a strong community around, despite the great tech.

Also as we know HF a stake really takes a type of "alien invasion" event so the community comes together, something that I dont see in the eos case. However it is interesting to see how this develops.1

I cant help but nitice that this is just a battle between two big players, EOS never seems to got a strong community around, despite the great tech.

Do you really think they don't have a die-hard community?

I'm certainly not in the know, but whenever I click a Tweet featuring EOS, there are always people in the replies willing to die on the hill defending the project.

...But in saying that, there's equally as many die-hard haters haha.

EOS is probably the most polarising crypto project.

Also as we know HF a stake really takes a type of "alien invasion" event so the community comes together, something that I dont see in the eos case.

The EOS community vs Block.One is NOT the same as Steem vs Hive

Yes, all communities could fork out their founders...

But every project's 'community' is going to feature a broad and diverse set of people and ideas.

As you said, it is going to take some sort of significant event to bring all factions together.

Our own Hive community got that when Justin Sun came to essentially destroy everything we had built on Steem, forcefully taking the chain in the totally opposite ideological direction.

That was literally a make or break, alien invasion type event.

However, I just don't see arguing over what Block.One is going to do with EOS's vested stake as being the same.

Isn't there also a lawsuit going on? I just think they will hard fork out EOS but I do wonder how they will approach things since it looks like the people have lost faith.

Isn't there also a lawsuit going on?

Block.One has already settled lawsuits with both the US Securities and Exchange Commission (SEC) and the Crypto Assets Opportunity Fund (CAOF).

All related to their 2018, $4 billion IDO/token sale (whatever we're legally supposed to call it now).

So keeping in mind that they raised $4 billion and have an insane Bitcoin war chest, here are the settlement amounts:

Ultimately, these are nothing more than token gestures so everyone can save face.

Payouts as small as this won't have any effect on their business and they're now free to do what they want without having to worry about regulators breathing down their back.

I lost faith in EOS when block.one started playing nice with the SEC. Like all these networks that give themselves a founder stake they really leave themselves open to a rebellion or give the government someone to come after. Whatever happens, I hope @dan stays with the community.

Like all these networks that give themselves a founder stake they really leave themselves open to a rebellion or give the government someone to come after.

Hive's birthing story is unique in the way that we don't have a single founder or founding stake.

...But there was literally nowhere to send the letter, haha.

With this in mind, I'm just frustrated that we're not pushing Hive Backed Dollars (HBD) in a more meaningful way.

A truly untouchable stablecoin that the SEC can't do anything about.

HBD has the potential to catapult Hive into the stratosphere alone!