@forexbrokr 72
about 2 months ago (Edited)
LeoFinance 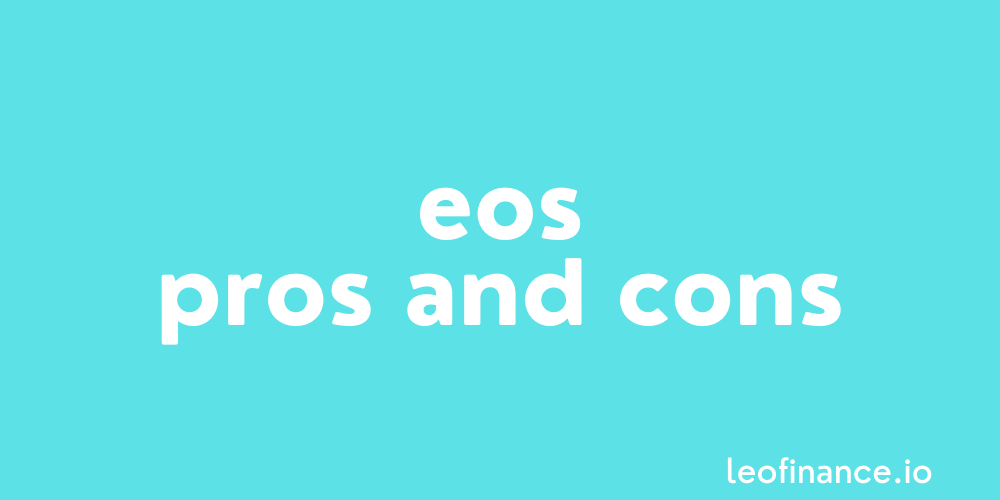 The pros and cons of EOS and a final verdict on whether Dan Larimer’s latest project can be viewed as a success.

EOS, created to solve the scalability issues found among other similar projects, has by some metrics, been a success.

But EOS has now also been joined by a gaggle of fierce competitors, somewhat losing its soul as it struggles to remain relevant.

Created by software engineer Daniel Larimer and entrepreneur Brendan Blumer, EOS is a platform that enables the easy execution of smart contracts on a decentralised system.

Unlike its major competition of Ethereum, EOS provides its users with free execution of smart contracts and extremely low transaction fees.

Bock.one, the company behind the EOSIO ecosystem and the EOS token, has expanded since the launch of the coin in 2018.

They have formed partnerships with Google cloud, FinLab, SVK Crypto, and Galaxy Digital, among other high-end investment firms.

Although it is considered a major competitor of Ethereum, it is nowhere near its equal in terms of price.

In that same vein, it has found itself amid many other competitors such as Solana and Avalanche.

Due to the next list of pros, a lot of experts believe EOS has what it takes to overthrow Ethereum as the second-largest cryptocurrency and number one executor of smart contracts.

Block.one are leaders in the corporate scene and have taken full advantage of their position.

Partnership with companies like Galaxy Digital, Google Cloud, FinLab and SVK Crypto are defining deals that set EOS apart from its competitors.

These partnerships increase the utility of the EOS token, provide priceless exposure and also improve the overall market capitalisation of the token.

EOS has seen a consistent volume increase every year since 2020.

This trading volume increase has led to speculation around the price reaching $6 by the end of 2021 and an upward projection of up to $17 in 2033.

By adopting a DPOS (Delegated Proof of Stake) algorithm, EOS has been able to increase scaling time to about 10,000 transactions per second.

Its version of DPOS involves the election of 21 witnesses who serve as leaders of the system.

They are the first to receive an EOS token after it is mined and is then in charge of how it is dispersed.

The low transaction fees caused by fast scaling time is an attractive feature that could lead to a major repricing.

4. It is cheaper than the competition

Placing itself in competition against Ethereum, EOS provides a much cheaper token with a similar utility to Ethereum.

EOS, at the time of writing, is valued at an average price of $5. However, there are rumours that EOS could reach a new all-time high by the end of this year.

It has not been able to reach such a level since.

With the number of developers staking the EOS tokens to add to the already existing 5,000 Dapps built on the chain, the token looks underpriced.

These are just some of the reasons that speculators believe that better days are ahead.

Where cryptocurrencies are concerned, this causes an extreme love/hate relationship.

Investing in EOS at the right time could be the best decision you ever make, however, investing close to the end of a bull run could see the tide soon turn.

The key is whether EOS can build anything meaningful that adds fundamental value to the chain, thus helping to shield it from the next overall bear market.

Before deciding whether EOS is the right project for you to get involved in, you need to consider the following cons.

One of the major attractions to a decentralised project is token distribution.

EOS's parent company Block.one own the majority of tokens, with a large vested EOS stake still earmarked for the company.

This doesn't appeal to the type of people who prefer a decentralised project to be… you know, actually decentralised!

The majority ownership of the tokens downplays the independence of the 21 voted validators.

2. The exit of the co-founder

Dan Larimer, the co-founder and CTO, happens to be a blockchain enthusiast who believes that the majority of the tokens should be made available to the public and not owned by a single individual or company.

His departure from the team on January 10th, 2021, didn’t speak well for the future of EOS and their lack of progress since, has seen his move somewhat justified.

There is so much more to this story that the public is never going to be made aware of and what is supposed to be an open, decentralised crypto project, this just leavea a sour taste in your mouth.

A settlement with the Securities and Exchange Commission (SEC) is never a good sign.

Especially at the start of a project.

There was a case against Block.one where they were accused by the SEC for not registering their digital assets as securities before offering them up for an Initial Coin Offering.

This accusation leads to a $24 million settlement charge.

Chump change in the grand scheme of things, but a blot on the company’s copy paper nonetheless.

At the moment, it would appear that EOS has more upside than downside as the pros outweigh the cons.

However, the future of EOS will ultimately be dependent on how much relevance they can gather through current and future partnerships.

We really need to see Block.one do more, or pass the baton to the community for a new dawn.

Why not share a chart or leave a comment with your opinion on the EOS pros and cons. All comments that add something to the discussion will be upvoted.

Thanks for this look at EOS. It was one of the original coins marketed as an Ethereum killer, and I bought some a while ago, but I admit I forgot about it recently! EOS is still probably a great option for building Dapps, and it's nice to see that it's still going strong, even if development has slowed!

So much depends on Block.one and what direction they take the project.

EOS has too much potential to just waste away like it is right now.

Eos was one of my favorite coin before and I don't even know what happened, I just sell most of my holdings.

Block.one needs to do actually and I believe eos and eth are their own problems

Yep, EOS has wasted all of its immense potential.

Your story of being an early investor, but getting tired of Block.one's inaction and just dumping is a common one.

It's honestly sort of sad to see how much potential continues to be wasted.

There has been some talk of doing what the Hive community did when it forked away from Steemit.inc and for me that could be very interesting and exciting. I believe that @dan is still working in the background to improve the blockchain with some very novel governance approaches. I think it is still a hold for now but now that I see Hive being able to do much of what EOS promised it will have a lot of catching up to do especially when it comes to the network effect.

What is Dan's latest project and what's their link to EOS?

It's a community-driven project I take it and nothing to do with Block.one?

As far as I know, he was trying to create a new governance model through a process called Eden. This uses something called fractal democracy. They have a website and yes it is community-driven with some funding from Block.one amongst others. Forking as Hive did could be the best option for EOS. I feel @dan left because with the founder's stake Block.one has had to move very slow to play nice with the SEC and dan just wants to make and try different things without seeking permission. I would love to see him contribute more to Hive like he used to do.

Ah thanks, I'll definitely have to look deeper into that one.

The age of the community is coming.

Hive yet again leads the way.

WOW I knew absolutely nothing about EOS cons, I can see why the penny has been flying low.

There are two sides to every penny ;)

But yeah, there are certainly some big negatives when it comes to EOS that ultimately contribute to its price going nowhere.