Further musings on the future of social media

@forexbrokr 74
about 2 months ago
LeoFinance 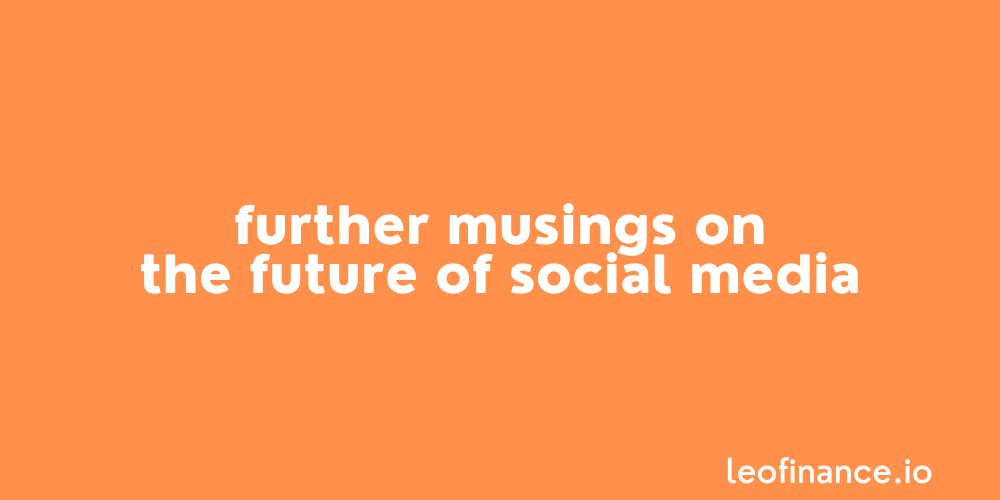 The future of social media is more than just shitposting and organising coffee dates.

No doubt I’m not the only one here on LeoFinance that spends a lot of time thinking about the future of social media.

Now I essentially use Twitter to shitpost and Facebook to ensure I don’t miss out on social events organised by friends and family.

But while I sit at my desk in a country governed in a way where I have freedom to (within reason) do and say what I want, I’m fully aware that there are many others who aren’t afforded the same freedoms I take for granted.

For them, social media isn’t just about shitposting doggo content and organising which cafe to meet friends at today.

It’s about having the freedom to speak openly and freely about who they are, what they believe and organising meetups to promote genuine life improving change.

The future of social media is more than my shitty use case - It is to provide ALL human beings a communication platform.

So with that end goal in mind, we know social media platforms requires the following 2 non-negotiables:

This post continues to speak about why a decentralised, immutable base layer is key to the future of social media and which blockchain’s can truly allow Web3 social media dApps to deliver.

Spoiler alert: Hive will provide the immutable base layer required for the future of social media.

The immutable base layer required for the future of social media

Social media platforms will only be censorship-resistant if built as Web3 dApps on immutable blockchains.

This is because it’s all good and well to say you’re censorship-resistant.

Think about it this way…

If your base network can be taken over, then whatever your particular social media dApp built on top says it can do is made completely redundant.

The prime example of this has already played out on the Steem blockchain.

I’m sure you’re aware of the biggest social media dApp built on top of the Steem blockchain, called Steemit.

But as soon as Justin Sun was able to take over the Steem blockchain, he gained full control over transactions and therefore content published to the network.

Users quickly discovered that no matter what they were told, once the underlying network was compromised, there was nothing the platform itself could do.

Whether Steemit as a social media dApp liked it or not, as long as they were housed on the Steem blockchain, they could no longer provide users account ownership or censorship-resistance.

If you don’t think the same can and will happen to Twitter in its current form, then you are naive.

All that matters when it comes to the future of social media is an immutable base layer for dApps to be built on top of.

PS. If you were around during the Steem days, I’d love for you to jump into the comments and share what you were told around Steemit’s ability to provide censorship-resistance at the time.

This is true, it's like saying the essence will change, when the core isn't meant to change. I see this a lot with Facebook and Twitter. Free speech is being touted as the new revolution when the base layer itself is not meant to be.

As we saw with Twitter, the network can be sold and the new management's ideas about censorship-resistance might be completely different to the old.

Unless you have a technically resistant base layer, then you can't ever say that you're censorship-resistant.

The quicker users and businesses learn this, the better.

Control is definitely something people need to care more about. I just don't like all the push toward these centralized entities but that is also where most of the people are right now. Moving people from platform to platform is tough and they need a good reason to do so. That is why i think Hive needs to make applications that people will want to use.

I'm excited to see how the new LeoFinance interface - with its renewed focus on microblogging - handles sharing to Twitter.

Khal has talked about allowing Twitter users to essentially back up their entire Twitter history onto the blockchain.

But I'm keen to see what we can do going the other way.

My ideal vision is that we're able to essentially turn Twitter into a front-end of Hive whether they like it or not.

I mean what's the worst case scenario... they ban you account?

There would even then be scope for LeoFinance to combine your old history into your new on the blockchain.

Steemit wasn't a true WEB3 platform, Hive is and tbh it is the only of its kind. Facebook, twitter, noise.cash, publish0x, etc. None can match Hive.

Steemit was my first introduction to the space and don't remember even considering the concepts of censorship-resistance or Web3.

That is until Justin Sun came along and was on the cusp of destroying everything I had worked for.

It's human nature to just think "oh it won't happen to me" and continue to do what you're doing.

But of course, it will always happen to you eventually (whatever "it" may be).

In this case, being censored or banned.

Slowly but surely people will migrate to Hive based social dApps.

Like you said, it's the only one of its kind!

People weren't really talking about censorship resistant social media platforms before Trump was silenced.. even with STEEM I never felt censorship was a issue. If someone didn't like your content they just flagged it and your account into nothingness. Problem solved. I don't see how that has changed any. Right now everyone is getting along. But v what about when HIVE hits $5? The cries of over-rewarded content (and the flags) will return. That's still censorship imo and we haven't really seen it rear it's ugly head yet.. besides what's to stop HIVE from becoming another STEEM? 44B buys a lot of HP

Nobody can take away your ability to put YOUR message in front of YOUR audience and as such, Hive is censorship-resistant.

Yes it upsets people, but having your rewards removed is NOT censorship.

I just can't wait until the only post rewards people care about are layer-2 tokens.

When you consider the earnings potential of social/media businesses, any successful dApp that builds on Hive has the opportunity to generate a TON of money from external sources.

Ads, subscriptions, heck VC investments - It doesn't matter how they make their money because they are nothing more than businesses that plug into Hive.

But if they are then set up to drive those profits back into the token, it's not inconceivable for the price of layer-2 tokens to be MUCH higher than HIVE itself.

We just need social dApp developers to understand the true value of content on Hive and to then actually monetise it externally!

Do you know if there's any development or plans around the WEED token and their front-end?

I have no idea. I wish they would do something though. I'm probably the largest individual holder of the WEED token. I think I have about 140K of them.. I'm gonna need a new project soon