@forexbrokr 72
about 2 months ago
LeoFinance 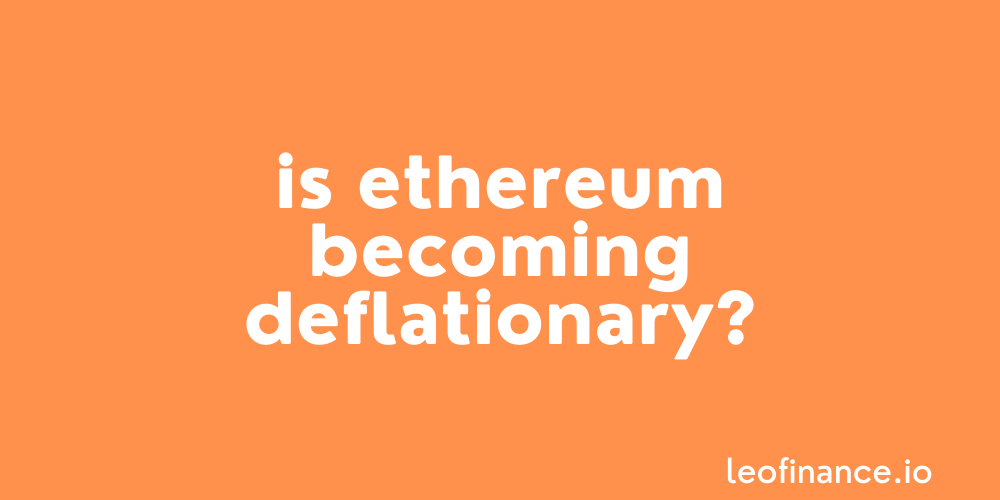 A look at whether Ethereum is becoming deflationary or is nothing more than a buzzword.

The Ethereum Network has recently experienced a number of changes and upgrades.

As the network heads towards a proof of stake consensus, the recent London upgrade has gotten the community excited.

Earlier in November, it was reported that Ether actually experienced two weeks of a consistent reduction in supply.

According to data, upwards of $65 million worth of Ether was burned at that time.

With ETH 2.0 designed to be the catalyst for really addressing the scalability issues Ethereum faces, it’s certainly exciting to see examples of more Ether already being burned than mined.

This section of our Ethereum guide looks at whether Ethereum is becoming inflationary and discusses the future of the blockchain.

While there are times where more ETH is burned than mined, it's difficult to state if the coin is really deflationary.

First of all, unlike Bitcoin which will only ever see 21 million coins enter circulation, Ether has no limit to the number that can be printed.

Bitcoin has always held sway in the discussions about deflation because of its finite supply. However, Ethereum can be deflationary on certain conditions.

These conditions being that the number of transactions on the blockchain is dramatically more than the amount of Ether that is mined daily.

The number of Ether created and in circulation is always going to be changing, which means it can be deflationary one day and inflationary the next.

But contrary to some mainstream beliefs, having inflationary properties is not a bad thing.

Again, this goes back to the previous point raised, around how Ethereum's deflation hinges on Network activities.

Unlike Bitcoin that has a finite supply, Ethereum will continue to be mined and if gas fees from transactions don't outweigh the number of mined assets, then it can't be deflationary.

Looking around the crypto space however, you can see that the number of networks offering something similar to Ethereum is rapidly rising.

At this very moment, there are competing networks like BSC, Solana and Avalanche just to name drop a few, all jostling with Ethereum for market share.

Assuming the competition dilutes Ether's market share, invariably reducing the amount of gas fee paid on the network, that in turn may potentially reduce the amount of Ether that gets burned.

If this scenario proves to be true, Ethereum’s deflationary days will be fewer and far between.

According to Etherscan, the average cost of an ERC20 token transfer is around $46.

Also, for Ethereum to consistently produce deflationary blocks, gas prices need to be as high as 150 gwei.

So what this means is that at the time of writing, for Ehtereum to consistently be deflationary, it needs to operate at a high gas price.

This is ironic because these high fees could be seen as making people move to other networks, in turn leading to a reduction in the number of activities on Ethereum.

Final verdict on whether Ethereum is becoming deflationary

So in essence, deflation in Ethereum may not be considered to be sustainable.

In fact, the reason for ETH deflation isn't a cause for celebration.

In recent times, Ethereum aficionados have been encouraging users to employ layer 2 solutions, while others have quit the network altogether and moved to platforms with lower fees.

Yes, it experienced consecutive weeks of deflationary block production but that was only because the community had to pay exorbitant fees.

So is Ethereum truly deflationary?

But this deflation in Ethereum is only on the surface and exists on the premise that gas fees are high.

Why not share a chart or leave a comment on whether Ethereum is becoming deflationary. All comments that add something to the discussion will be upvoted.

This Ethereum blog is exclusive to leofinance.io.

I can't imagine using 45$ to pay for a transaction except I am sending over 5k dollars.

I tend to agree with you.

As for the fees becoming more expensive, it really depends on how you look at them.

In USD terms, the fees have gotten out of hand.

This makes it difficult to acquire eth then.

We need blockchains that have low to zero transaction fees

Well I think ETH can be deflationary so long as the money to earn there is large. If you earn $500 but have to pay $100 in fees, people will still take that offer. Now the issue is whether or not people will ditch ETH when things stop being profitable.

They surely would have already ditched ETH by now if that was going to happen though?

Ethereum isn't going anywhere, no matter how many Ethereum killers are released.

Competition and interoperability is key.

The problem is that we can't predict the future. Maybe ETH will be fine because if less people use the chain, gas fees might also be cheaper.

I think with the release of ETH 2.0, we will see more consistent deflation.

ETH 2.0 promises so much, but only time will tell.

I'm honestly not sure what to think at this point.

What I will say, is that I see a brighter future in the decentralised, founderless Hive blockchain than I do for Ethereum.