Onboarding followers from Web2 to Web3 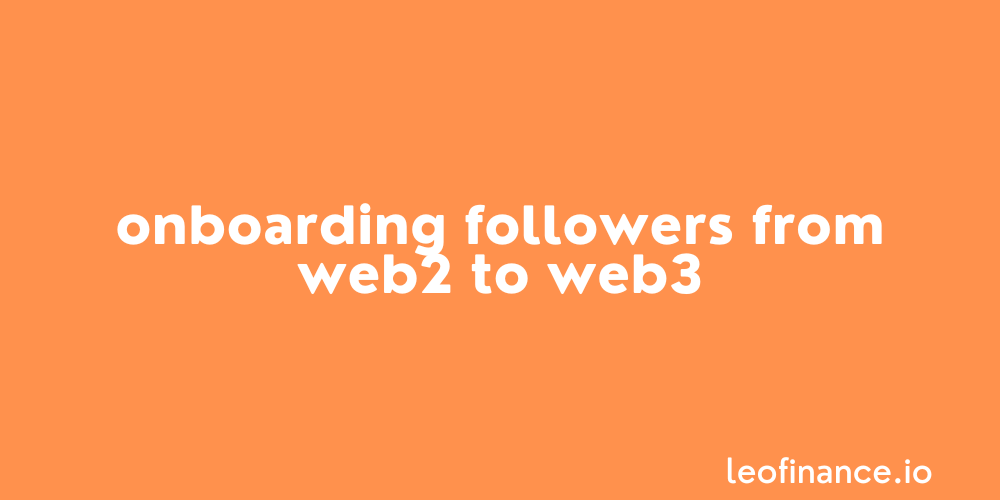 A look at why it’s so important to start onboarding your followers from Web2, onto a Web3 account that you own ASAP.

Are you a business who relies on traditional social media platforms like Facebook to reach your audience?

What would you do if for whatever reason, Zuckerburg decided to pull the plug and Facebook went down?

I’ll answer that one for you.

Pardon the French, but there’s really no other way to put it.

It’s for this reason that it’s imperative you start onboarding your followers and greater audience from Web2 socials, onto a Web3 account that you own.

Let’s take a look at what you’re actually doing by building an audience on traditional or Web2 social media platforms and why it’s so important to be making the shift to Web3. 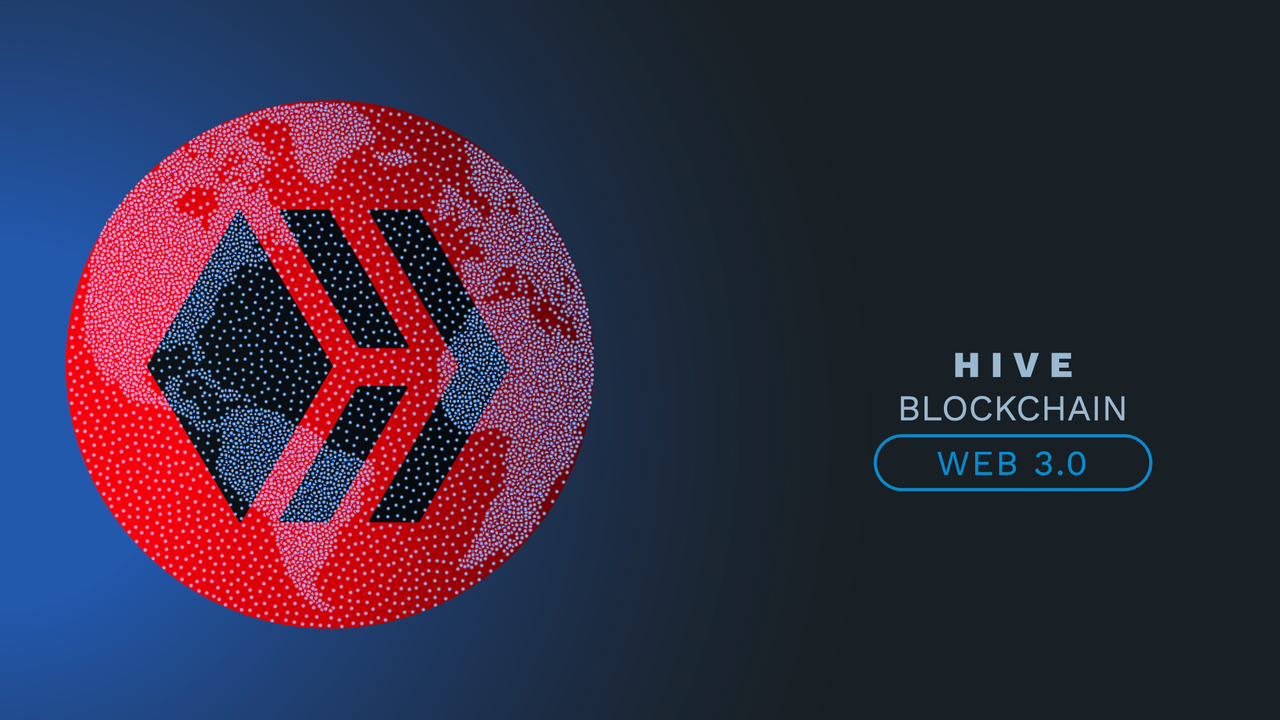 The thing about your Web2 social following

Here’s the thing that needs to be made abundantly clear when it comes to your social media following on Web2 platforms.

While you may have thousands or even millions of followers on traditional social media, they’re not really yours*.

That’s right, you don’t actually own your audience at all.

They’re not yours, they’re Facebook’s.

All you’re actually doing is borrowing access to them, via an account that you’re renting in return for the platforms to sell your data.

Facebook runs a closed shop on their own closed network that they retain full control of everything over.

Every day we examples of regular users and businesses having their seemingly vanilla message censored, or worse, having their entire accounts outright banned.

Think it won’t happen to you?

Think no way in the future will your message or offer be viewed by Facebook’s shareholders as immoral or wrong?

Onboarding your followers from Web2 to Web3, onto an account that you own the keys to and runs on a secure, entirely decentralised network is at this point, simply a sound business decision. 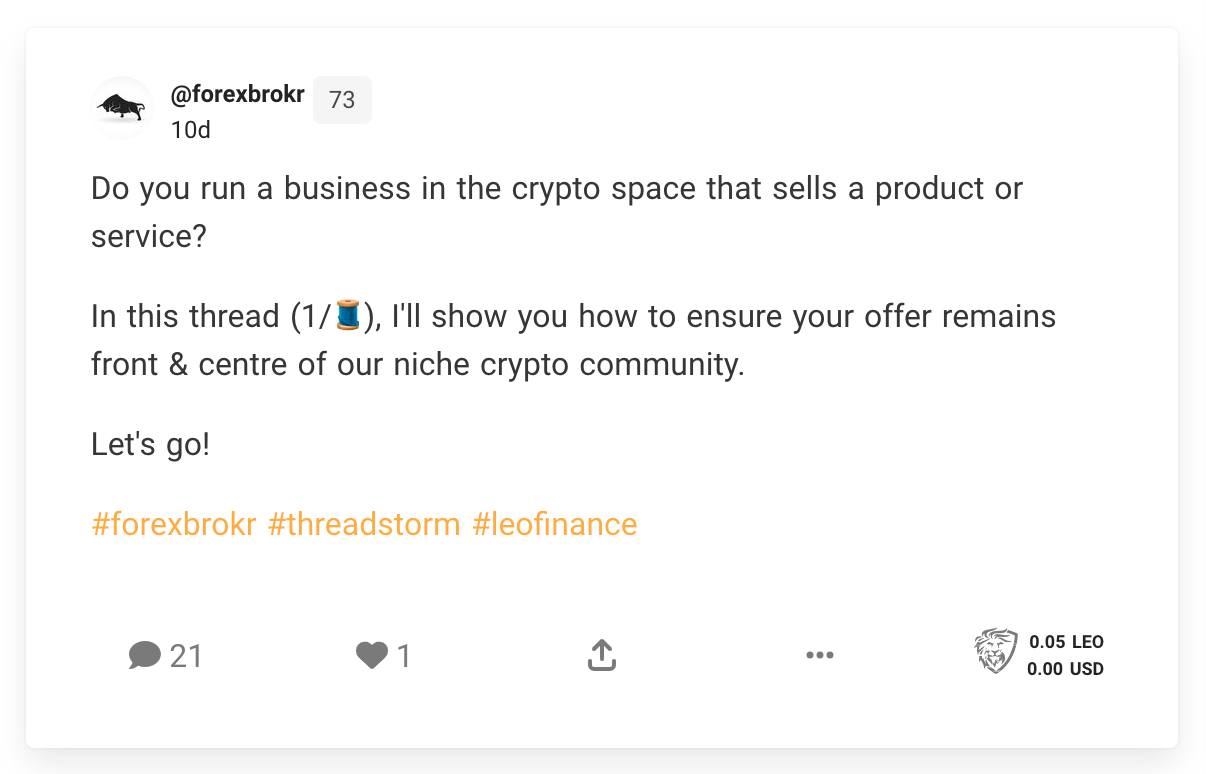 For more on onboarding from Web2 to Web3, check out this LeoThread.

Obviously as a business you need to fish where the fish are and there’s no denying that at this point in time, that’s on the big 2 Web2 social media platforms of Facebook and Twitter.

But once the penny drops that users don’t have to sell their digital soul to tech companies in return for consumable content, do you really think that they’re going to stay?

So the best course of action that you can take is to use your Web2 social presence as funnels to onboard your followers to Web3.

Catch as many fish as you can while the ocean is teeming and you’re going to have a massive head start over the competition when the inevitable shift to Web3 social platforms occurs.

An inevitable shift that is likely to be led by businesses themselves who realise just this.

We are already starting to see this shift to owning your audience play out, with a renewed push for businesses to build an email list.

But if you’re pro email marketing (as any business should be in 2022), you can think of having a Web3 account as email on steroids.

Web3 accounts are social media, email addresses and bank accounts all wrapped in one!

As more and more businesses start to understand the advantages of owning your audience on an account that runs on a censorship-resistant network, using your current Web2 socials as a funnel becomes a no brainer.

Final thoughts on onboarding followers from Web2 to Web3

If you’re a business who relies on putting your offer in front of your audience that you’ve painstakingly built over a long period of time, then stop taking unnecessary risks.

Make the smart choice and get a Web3 Hive account today and start onboarding your borrowed audience from traditional social media, onto a Web3 account that you own.

All roads lead to Hive.

I had to delete the Tweet linked here because for some reason, Twitter wouldn't display the preview card.

Creators and business owners using WEB2 platforms are under a serious risk of losing their identity, data, content, following and money.

Businesses care about 1 thing and that's their bottom line.

And by not taking measures to onboard their followers from Web2 to a Web3 account that they own the keys to, they are putting this bottom line at risk.

It's just not worth it!

I have seen people complain about losing their entire following a lot lately and it's definitely a reason why people should be on multiple platforms. I was wondering if there would ever be a platform that links everyone together on all their platforms.

There is never going to be 1 platform that rules them all and that's certainly not something that proponents of true Web3 are pushing for.

I encourage businesses and creators to use a Web3 Hive account because it affords them the ability to own their audience and provide them with a censorship-resistant base for their content.

They obviously will use other Web3 socials outside of Hive and even Web2 socials to expand their audience.

And this certainly shouldn't be seen as a bad thing like I see some Hive maxis saying.

They have to fish where the fish are and right now that's on Web2.

But having their content also on a censorship-resistant Web3 Hive account that they own the keys to for their base, protects their ability to do business.

Seeing web 2.0 social platforms as a funnel just started a chain reaction in my head. Web 3.0 like Hive is definitely the future of conducting business and the best part is you can do all of it under one roof instead of dabbling between different platforms.

Yep, I think it's a good way of describing what we should be encouraging businesses to do when it comes to shifting operations to Web3.

We don't want to be saying stop using Web2 networks because obviously that's where their audience and potential clients currently all hang out.

That would be bad business.

What we do want to make abundantly clear is the risks of losing the audience they're building (renting) over there is real and totally avoidable.

Tech companies can and do change reasons for censoring and banning accounts on a whim.

This makes encouraging them to onboard followers from Web2 to Web3 a sound business decision.

It's incredible how people take web 2 for granted.

I have a friend whose business relies 99% on Instagram and I keep telling her she needs a backup plan. It's not like she should quit Instagram right away and move somewhere else but she definitely should be building her audience on a web 3 platform such as Hive

It's madness when business owners refuse to learn the risk of relying entirely on Web2 platforms.

Maybe try getting her to look at a Web3 account in the same way she would look at an email list.

As a way to own her audience completely independent of any one platform.

It good advice most especially those running businesses on web2 social platform like Facebook, Instagram and Twitter where you can lose you data easily. On boarding their audience to web3 social media will guarantee that security they're looking for and give access to their keys

I'd just always encourage online businesses to consider what would happen to their bottom line if they were deplatformed by their primary Web2 social platform.

Onboarding followers from Web2 to Web3 such as onto a Hive account is a simple risk mitigator for their business that doesn't take much effort.

They don't have to stop posting to Web2.

That really sound good onboarding from web2 into Hive

This is SO true!

Simply put, the web 2.0 model is based on 'you' doing the work, and 'them' collecting the reward. Monetizing user engagement is specifically how it's been built, and it reminds me very much of The Dark Crystal.

If you've made your business inside the web 2.0 model, you are essentially shackled in cage, just waiting to have your essences drained dry!

Can't tell which one is better, the article or the thread.

I find it fascinating (and not in a good way!) that web2 businesses do not see the risks they are taking by not diversifying into web3.
Surely even the blind can see what is happening on the various platforms?