@forexbrokr 72
about 1 month ago
LeoFinance 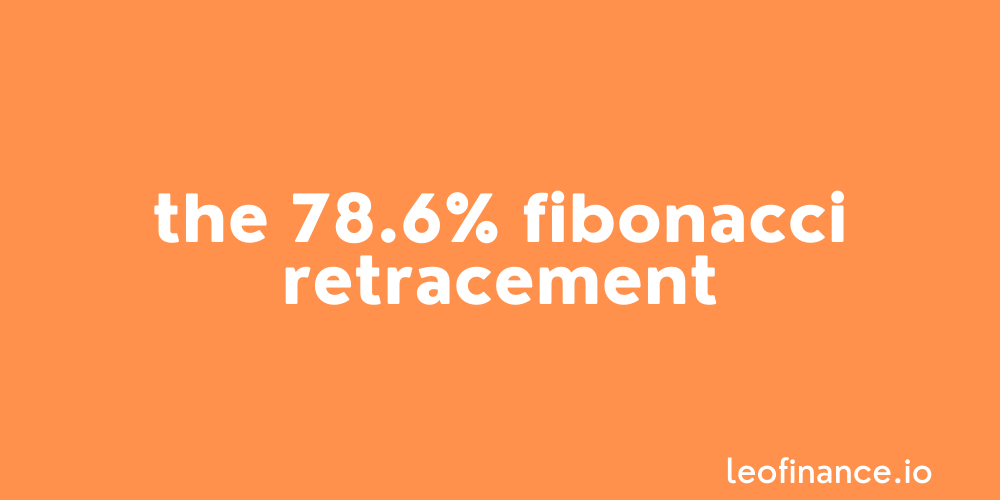 The 78.6% Fibonacci retracement is an underused method for determining hidden support in crypto markets.

As a result, day traders like you and I can take advantage, riding on the coattails of this smart money.

Let’s go over what is Fibonacci, why the 78.6% is significant and see a real world example playing out right now on HIVE.

What is Fibonacci again?

Fibonacci retracement levels are based on the key numbers identified by the famous Italian mathematician, Leonardo Fibonacci back in the 1200s.

The key to Fibonacci levels isn’t the sequence itself, but the ratios between numbers in each series.

This is why in forex and crypto trading, a high and low price point on a chart is taken, with the length divided into a set of key Fibonacci ratios.

Once the prices at these levels have been identified, technical traders then watch them as possible areas of support and resistance.

Why is the 78.6% Fibonacci retracement significant?

While it doesn’t get the same attention from retail traders as the 50 or 61.8% levels, the 78.6% Fibonacci retracement level is watched closely by large position traders.

As the 78.6% retracement is so deep, hedge funds and banks use this level in conjunction with their own long-term fundamental analysis to identify value prices to take a position.

If their fundamental analysis says a market is a buy but it’s this heavily oversold, then the 78.6% retracement is where buyers will likely step in.

Just like other Fib retracements and areas of support/resistance, this becomes a sort of self-fulfilling prophecy that works simply because others think it works.

While the 78.6% level is significant, the fact it's such a deep retracement means you should never use it on its own.

Without any sort of supporting fundamental analysis to say what you’re buying is actually undervalued, what you’re likely doing is simply buying a dud.

Always use deep Fib retracements in conjunction with fundamental analysis and where possible, a further confluence of technical zones.

HIVE retraces to the 78.6% Fibonacci Retracement

With that word of warning in mind, bring up a fundamentally strong HIVE chart: 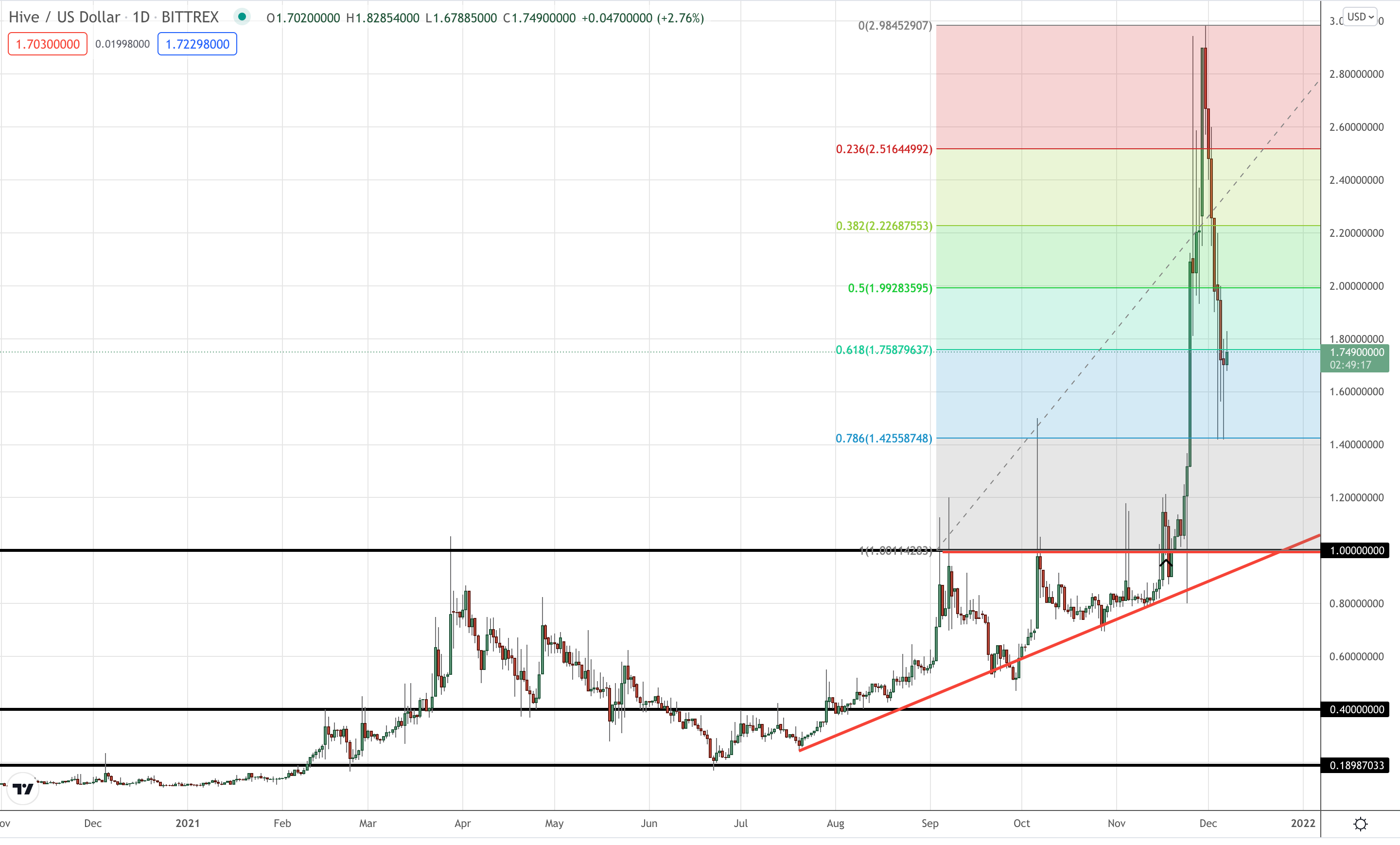 As you can see, price has wicked down into the 78.6% Fibonacci retracement a couple of times already, finding immediate support and bouncing both times.

HIVE ticks the boxes of being a fundamentally strong cryptocurrency whose price is being influenced by unrelated factors.

If big players focused on the project’s fundamentals are looking for a zone to accumulate undervalued HIVE, then this 78.6% Fibonacci retracement is it.

As a retail trader, you can therefore prevent yourself from swimming against the tide by surfing the momentum they provide.

Why not leave a comment on what you think about using the 78.6% Fibonacci retracement level. All comments that add something to the discussion will be upvoted.

This 78.6% Fibonacci retracement blog is exclusive to leofinance.io.

We all understand that HIVE is heavily undervalued.

That's why we're both here and keep adding to our HIVE stack :)

This is a wonderful analysis, FB! I enjoy interpreting charts and spotting trends and resistance/support levels, but this is next level. I !LUV your analogy about market behaviour too, that it's "a sort of self-fulfilling prophecy that works simply because others think it works." Very true. Apt. Thanks for sharing. :)

@luvshares 56
about 1 month ago
@thatcryptodave(1/3) gave you

Thanks Dave, I appreciate the kind words.

I've been really trying to make my analysis much more digestible for regular people, so I'm happy to hear that some of those analogies are making it an easier read :)

Do you mind sharing a bit more on quarters theory?

https://ecency.com/hive-167922/@shakavon/gfssifea check out this video by Paul Scott he isn't speaking about the above strategy but it is similar

The moment I saw famous mathematics Fibonacci on the title of this post I knew it was one to settle into.

As the 78.6% retracement is so deep, hedge funds and banks use this level in conjunction with their own long-term fundamental analysis to identify value prices to take a position.

You really are on to something because I enjoyed what I read a whole lot, it was very enlightening and entertaining. I won't feign complete comprehension but I guess I'm not as lost as I would have been weeks ago.

Don't worry if you don't understand every detail.

You'll keep learning, be way ahead of normies who aren't here and ultimately make more money from your investments! ;)

Will definitely do that. I was advised by Belemo to just keep posting and engaging for now so that improve what's in my kitty, and then I can be truly prepared for the market. I am also glad I know people like you who are willing to help out. Thanks a gazillion

I never considered the 78.6% Fib but I might have to look into it more. It does seem useful if even the banks use it.

Just make sure you're using it to buy coins that have good fundamentals.

Otherwise, you're not buying an oversold/undervalued coin at a good level.

You're just buying a dud that is eventually going to zero.

@fjcalduch 66
about 1 month ago (Edited)

I'm glad you are bringing up the Fibonacci trading tools because I've got a question.

Do you think this chart predicting Bitcoin ATH for this cycle around $200K is correct?

Let me preface by saying this...

Technical analysis is NOT about making black and white predictions.

Anyone that says they can do that is a charlatan.

What technical analysis offers (including Fibonacci), is that it shows areas where price is more likely to bounce.

If you know where price is more likely to bounce, then you are able to better manage your risk.

Do you think this chart predicting Bitcoin ATH for this cycle around $200K is correct?

So with the above in mind, nobody can say if that prediction is correct or not.

What I can say is that it's certainly an interesting prediction and one that I certainly think is likely to play out.

When BTC makes a new all time high, it goes into price discovery mode where there are no historical levels to provide resistance targets.

So round numbers and tools like that Fibonacci extension are all humans can use to try and set targets.

If it's played out exactly like this in the previous 2 cycles when price made a new all time high, then it's definitely something to watch when it breaks out again.

For that reason, I actually really like this prediction.

Fib extensions just use the same mathematical formula as retracements (don't ask me to explain it, I'm not going to pretend I understand the mathematical intricacies haha).

2.272 is just one of these numbers in a sequence that price has reacted at before, so there is a likelihood that it reacts again in the future.

Nothing more than that.

Great info to know, will try to apply things from here to future trades.

But hopefully, this post encourages you to also not sleep on the 78.6% Fibonacci retracement.

Google is your friend.

Draw a Fibonacci retracement from a low to a high on any chart.

The percentage levels you get will then usually act as support when price pulls back.

The 78.6% Fibonacci retracement is often ignored, but is actually significant.