The Metaverse and Web3 - Intertwined at their core 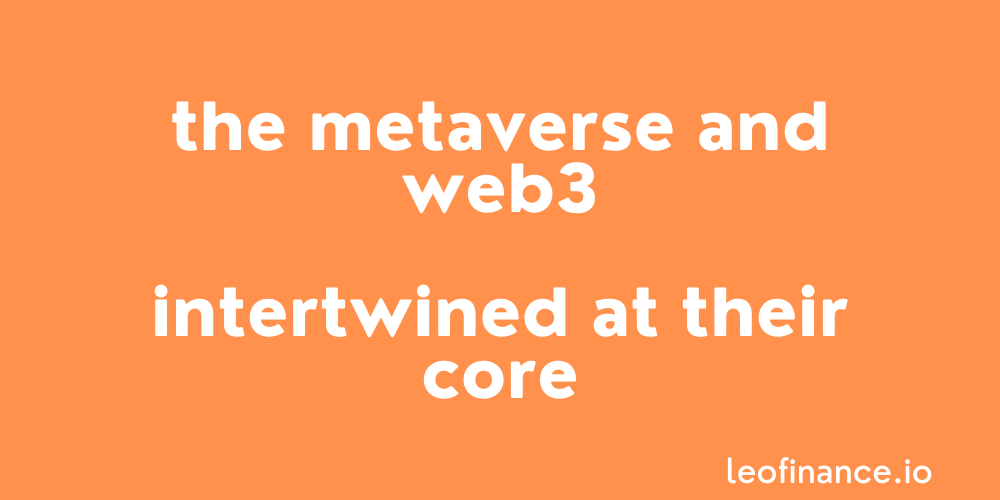 Contrary to what Facebook wants you to think, the decentralised Metaverse and Web3, are thoroughly intertwined.

With Facebook rebranding to Meta, they’re essentially trying to change the future of how Web3 will look and operate.

But don’t fall for it.

Just like Web3 will ensure freedom of speech and movement of money for all, the Metaverse will operate in exactly the same way.

You see, the Metaverse is nothing more than a series of different virtual places, platforms or worlds.

The ideal version built across various decentralised online protocols will be free for anyone to create, interact, conduct business and move between.

However, instead of facilitating this free, open and decentralised vision of the Metaverse, Facebook is trying to create their own closed shop.

The China of Metaverses if you will.

Where you’re walled in by your Facebook overlords, only interacting with the specific worlds $anctioned by god himself, Dear Leader Zuckerberg.

But the thing is, the writing for Facebook is on the wall.

I mean Facebook can and will build their own closed metaverse.

They will pay the brightest developers, all the money in the world to build some pretty cool shit quicker than anyone else.

All for the price of your data to sell to advertisers.

But at the same time, a series of interoperable, free, open and decentralised worlds will be built where the individual retains control and profit.

These two Metaverses will essentially run parallel with one another and you, the user, will ultimately decide which worlds you interact with.

With a lack of centralised direction however, the latter will be slow, inefficient and frustrating to deal with in the short term.

But in the long term, people will always choose what benefits them the most.

And in this case, that’s being able to truly own and profit from the various universes and associated economies within the decentralised version of the Metaverse.

Sure, Facebook will use all their wealth and power to try and quash them, in exactly the same way we see legacy social media trying to shut down Web3.

Facebook has already seen the Web3 shaped writing on the wall and seemingly given up on their future place as the premier social media network in favour of the Metaverse.

While Twitter has tasked their Blue Sky division with creating Hive.

But in a way they can still control.

So if you want a taste of what the future of a decentralised Metaverse could look like, you need look no further than what’s already being built on the Hive blockchain.

A working ecosystem of applications like social front-ends, gaming platforms and communities.

Accessible by all via a single Web3 Hive account that is used to plug, play and earn wherever you go.

You want out and to be able to move to another ecosystem?

It’s your money, you can do as you please.

There are numerous centralised and decentralised bridges now available for you to cash out and move your Hive elsewhere.

Don’t get left behind as the digital world shifts from Web2 to Web3.

Hive is not just a web 3 but an amazing one, no boring moment with nft and quality financial information on Leo, the community is also accommodating.

Hive communities are excellent - All while remaining open and free at the base layer.

Hive is the key!

If someone would like to start selling NFTs into the Metaverse, what platform would you suggest?

There is no single metaverse.

The concept is made up of a ton of different worlds altogether, running on different networks.

Some open - Like some of the blockchain based worlds.

My advice is you want to start selling NFTs into one part of the Metaverse, then pick a place where you will be able to freely move your assets and money in and out.

Which network you choose to do that on is entirely up to you.

Thanks for your answer.
I am interested in Blockchain Metaverses. In your opinion and from your eventual experience, where would you start?

Thanks a lot for your help. It's much appreciated

For a metaverse to be attractive it needs network effects, without a solid base of users it loses much of its appeal.

If so many people were really clamoring to have VR googles, why would they need to run so many ads to explain why the headsets aren’t weird or “for nerds” ?

I see you've come via Splinterlands and are now making your way through some of the Hive communities like Leo?

I'd love to hear your journey as to how you've found your way here if you've got a sec to share? :)

Back to the Metaverse, and I totally agree with you - Nobody is clamouring to put on a VR headset and sit around as cartoon characters of themselves.

But if we think outside the box for just a second, a digital realm that overlaps with and extends beyond the real world has endless potential.

It can literally be anything.

Yeah, we're wayyyyy early here, but there's no denying the potential of what an open, interconnected Metaverse could become.

By the way, what kind of copywriting do you do? I've dabbled and found it to be quite difficult to be good at.

Thanks Dane @forexbrokr I'm happy to.

To try and not digress too long-- I've been aware of crypto for a long time but the idea of new "currency" turned me off. My always intellectually curious business partner Dave kept hearing about web3 and helped build my interest on it. Then I came across a short video of Binance U.S. CEO Brian Brooks's explanation of the basics of web3 to Congress; that's when it clicked.

Dove down the rabbit hole hard, out of intense curiosity and to document my journey, explaining it as I learn it so beginners can conceptualize it simply. I'm still very much in the early innings of this part (and my understanding of it all).

Anyway, came across Splinterlands, which also instantly clicked (I used to play Yu-Gi-Oh as a kid). I saw (and still see) the massive potential in it, who doesn't want to P2E in an already super addicting game as it is?

During my research on SPL and difficulties getting fiat into DEC, etc, I kept seeing PeakD articles over and over again. Then I poked around on Peakd, and saw the massive potential here analogous to a website I use today called Seeking Alpha-- a stock market website which pays its contributors and has a huge number of engaged readers. Contrary to popular belief, blogging is still alive (and people's attention spans still there!) as long as the substance is deep, and not (social media 2.0) shallow.

I'm very much still checking everything out here on HIVE and all of the other platforms out there. I find it all rife with massive potential, but what I've learned through many market cycles over decades of history keeps me cautious and (hopefully) humble.

To your point on the Metaverse, my daughter plays Roblox and Minecraft (and SPL with me, which inevitably keeps me engaged here)-- the Metaverse is already here, we will see if Big Tech will succeed in centralizing it moving forward.

But in the long term, people will always choose what benefits them the most.

The more I think about it the less possible it becomes for Zuc or anyone else to compete with decentralization. They can pay the best devs but community contributions will be the most valuable asset in the metaverse and WEB 3.0. If they want to reward these they will need KYC to be mandatory gatekeeping their own revenue potential.

On the other side of the aisle, it only takes creating one Hive account, and you are trapped in all the potential without the hurdles.

It's such a no-brainer my brain hurts when I see people trying to twist and turn a perfectly good idea.

Couldn't have put it better myself.

We definitely think along the same lines when it comes to the future of money and tech :)

Don’t get left behind as the digital world shifts from Web2 to Web3.

Recently, I have been trying to onboard a few people I know to the wonders of Web 3 and a shot at being a part of the metaverse but it just seems like people just being subdued and subjected by their "overlord" The Zuc himself.

Like you rightly said, at the end of the day decentralized networks would rule the land but I also think we also need to try and make it a bit more friendly not only to the technological savvy but also the everyday people like my grandma who would fill up her status with motivational posts but find even looking at a different platform impossible.

I know all these issues would be handled with time as we get better at creating the metaverse to accommodate every single person we can find.

This is an entry for the @comet.ranker operation #ping contest.

If this isn't just amazing?! 😂

When the idea always works:
"Hey, I think I'm God now. I just have to come up with something not too shitty".