Using Monero to get clean Bitcoin

@forexbrokr 72
about 2 months ago (Edited)
LeoFinance 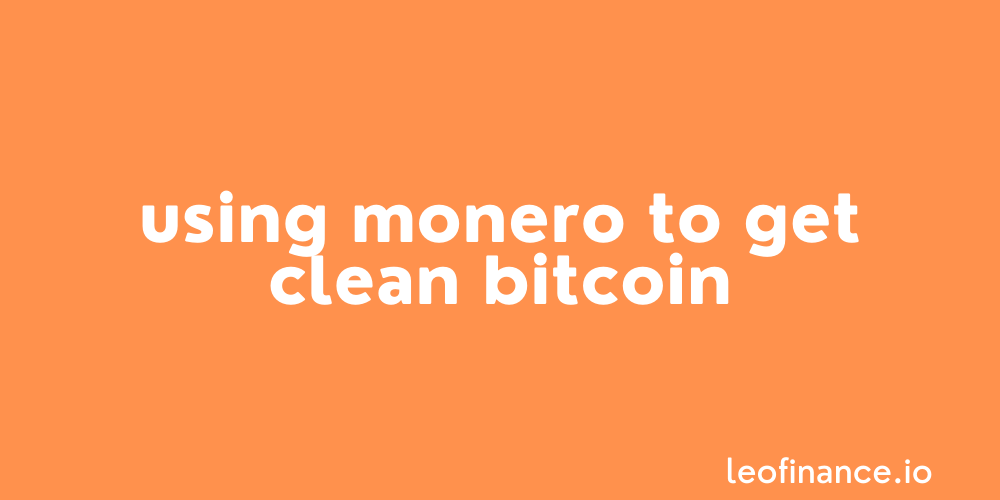 It’s possible to clean your Bitcoin using Monero (XMR), enhancing the untraceable transfer of funds from one person to another.

The need for privacy is not only important in cryptocurrency, but in all aspects of one’s financial life.

When it comes to keeping transactions anonymous, Monero offers users a level of fungibility in their tokens that quite frankly, Bitcoin cannot.

The public nature of Bitcoin’s ledger simply makes true fungibility of the token unattainable, with merchants within their right to not accept coins that have been used for whatever reason they don’t like.

To solve this problem, the potential is there for using Monero (XMR) to clean Bitcoin, allowing it to regain fungibility in the process.

What is Monero (XMR)?

Monero is the most popular privacy coin on the market.

Monero is both a private and decentralized cryptocurrency, unlike Bitcoin, whose ledger is completely public - It was designed to keep your finances private.

Privacy and security are Monero's primary goals, followed by ease of use and efficiency.

It’s this focus that makes Monero (XMR) the right choice for those who value the fungibility of their tokens and therefore privacy, above all else.

Simply put, Monero is digital cash like Bitcoin, but one that is almost impossible to trace once it has been sent.

That's one of the primary advantages of actual cash - Anonymity in a barter system.

Well, you could say that Monero plays the same role, but in the digital sphere.

What makes Monero different from other cryptocurrencies?

Monero is a cryptocurrency.

However, it can facilitate anonymity with speed in trustworthy decentralized transactions.

Monero is private - So private in fact that some crypto enthusiasts believe it is too private.

Unlike Bitcoin which is transparent on the blockchain protocol, Monero cannot be traced.

This means that unlike Bitcoin (BTC), all Monero (XMR) tokens are the same, offering true fungibility.

It is currently the 11th largest cryptocurrency in the world, with a market capitalisation of almost $1 billion.

Monero transaction fees are currently about $0.01 after the reduction that was made during their recent hard fork.

This makes microtransactions feasible, giving them more similarity to the cash barter system than Bitcoin itself.

How to clean your Bitcoin using Monero (XMR)?

Monero can be used to disassociate Bitcoin addresses with their source.

This adds fungibility to your Bitocin, allowing them to be used as anonymous cash to spend once more.

The untraceable nature of Monero is used to clear the transaction history associated with one address, starting fresh on a new address with no way of proving a link.

The process is somewhat straightforward:

First, you need to install a VPN on a fresh computer and then use the Tor browser for extra security.

This way, your location is anonymous and protected from tracking as the browser and VPN bounce your activities through different global servers.

The next step is to use websites that enable anonymous Monero transfers like Bisq, Paxful, XMR.TO or Local Monero.

These different exchanges have different functionalities and different levels of security.

XMR.TO is currently the most secure because it does not have fiat options or means of connecting your credit card for transactions, while the risk of person-to-person physical transactions is not necessary such as with Local Monero.

After running your Bitcoin through Monero and back, then you will have a new address with a clean History.

An alternative process is to deposit Bitcoin into non-KYC exchange HitBTC, exchange for Monero, send Monero to Poloniex and then convert back to Bitcoin.

However, using centralised exchanges in this manner is much riskier and you’re likely to encounter problems somewhere down the line.

Requiring extra security and anonymity for your funds is your right and should be your decision to make.

Using Monero (XMR) to clean your Bitcoin is one strategy available that you can use to remain anonymous.

Why not leave a comment on what you think about using Monero (XMR) to get clean Bitcoin. All comments that add something to the discussion will be upvoted.

This Monero (XMR) blog is exclusive to leofinance.io.

This is a pretty interesting topic. Have you used this process before? I know some people prefer the extra steps or fees to stay anonymous.

I always overpay my taxes because the government does such a good job with the money.

You think they will classify this as a felony in the near or distant future? The only reason people aren't doing this is because they have no idea what Monero can actually do.

You think they will classify this as a felony in the near or distant future?

I think they will try.

But it's one of those things where new tech has already far outgrown financial regulations in the legacy system.

Governments can call it a felony, but the tech is already there to so easily circumvent whatever rules that are eventually put in place.

How will they go after every little guy?

Surely there will be some landmark court cases where they simply won't be able to prove who owns what and then the cat will really be out of the bag.

In saying this however, haven't the Panama and Pandora Papers highlighted how the smart/rich already do this using offshore accounts?

If you don't want to pay your full tax bill (and are rich enough to pay someone to do it for you), then there are already ways without Monero.

Monero will just open up those possibilities to the little guy.

In my opinion, it's the rules around income tax that need to change in order to keep up with the realities of both tech and our interconnected, globalised world.

Yeah, makes sense. I know that they have been trying to trace XMR transactions but every attempt failed as far as I know.

I'm, just imagining a politician reading what you just wrote. They are all probably mad af that we beat them at their own game and now there is nothing that can be done about it. Even if you have all the money in the world, those that can do something about it are already happy in the crypto industry and have no intent on fixing your shitty problems.

In my opinion, it's the rules around income tax that need to change in order to keep up with the realities of both tech and our interconnected, globalised world.

100% agree. Crypto devs gave them programmable money that can be used creatively to solve these issues. Instead of using a new tool, they are trying to ban it.

Insane world we live in when you think about it.

We need more abilities such as this.

Privacy is going to be something huge in the future.

Privacy is the key to a truly fungible currency.

XMR is not for HODling, it's truly for spending.

I truly believe that what Monero (XMR) offers in this regard, is going to change how we view the entire definition of money.

I think XMR is a nice coin and do hope it will start to increase in price.

Looking forward to your next Monero TA update! :)

This is a really great catch! I was planning on going heavy into Monero next year and this is yet another reason to do so.

When you say going into Monero, do you mean as a buy and hold, or literally using the tech to keep your finances private?

Unlike Bitcoin, Monero truly is a currency to be used and spent.

I'm becoming a bit of a crypto maxi lately hehe

@poshtoken 72
about 2 months ago (Edited)

We need a dex with BTC-XMR pool. Problem is you can't call it dex since they don't support smart contracts and you have to run a service somewhere in a centralized manner.

It doesn't look like Monero will get smart contracts on layer-1 either.

But have you seen what Tari is doing with a potential layer-2 smart contract solution for Monero?

It's certainly something that is being worked on because the demand for privacy will always be there.

I always preach blockchain interoperability and think that a truly decentralised option will eventually come to fruition.

Just spitballing here, but what would a THORChain solution for BTC-XMR look like?

Would that solve the problem?

Tari looks interesting. I have to look into it, but on the first look its like smartBCH just for monero (Mone-Tary?).

If you want a true dex, you have to have smart contracts on both sides, OR one smart contract on a blockchain which can observe others. Worst case is when you have a daemon on a server which observes transactions then initiates the other side.

The ThorChain pair maybe could work

Monero is a true pprivacy coin then, and very useful to have this in your back pocket just in case.

Good plan! But xmr.to is not active anymore. There are many other options these days. For example, you can swap between XMR and BTC or LTC in CakeWallet, the user-friendly mobile Monero wallet. And there's a convenient swap website called Sideshift.ai.

Even better: atomic swaps allow you to exchange Bitcoin and Monero directly between the two blockchains. This is already possible, although it's rather complicated until a better UI is developed.

Thanks for this, I'll update that section of the content to include those alternate paths :)