Your true APR in the SWAP.HIVE:SIM LP 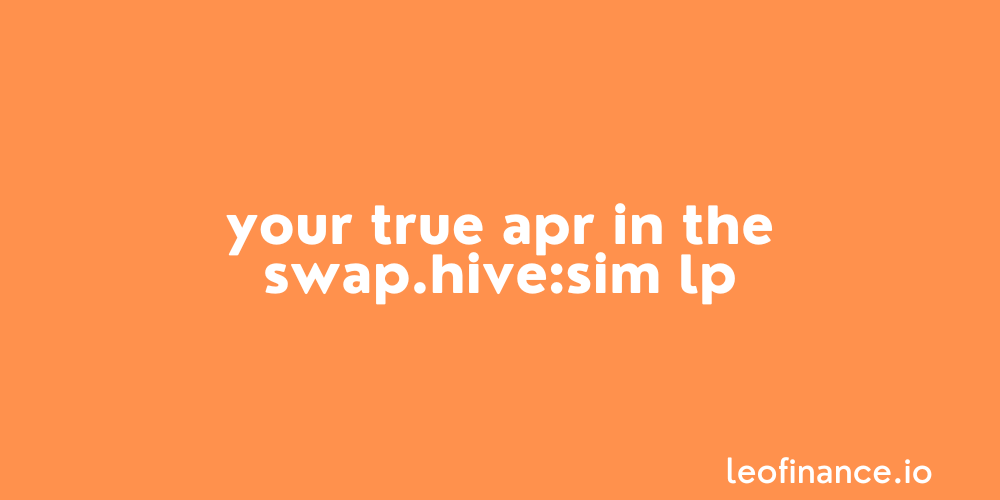 dCity's SWAP.HIVE:SIM LP actually pays out a much higher APR than the 25% advertised.

With Hive’s multi-layer system, you should know by now that not everything is always as it seems on the surface.

This is certainly also true when it comes to the DeFi liquidity pools on Hive known as Diesel Pools, and the true APR you will earn in the SWAP.HIVE:SIM LP.

As you’ll see, it’s actually much higher than the 25% advertised as diesel pool rewards. 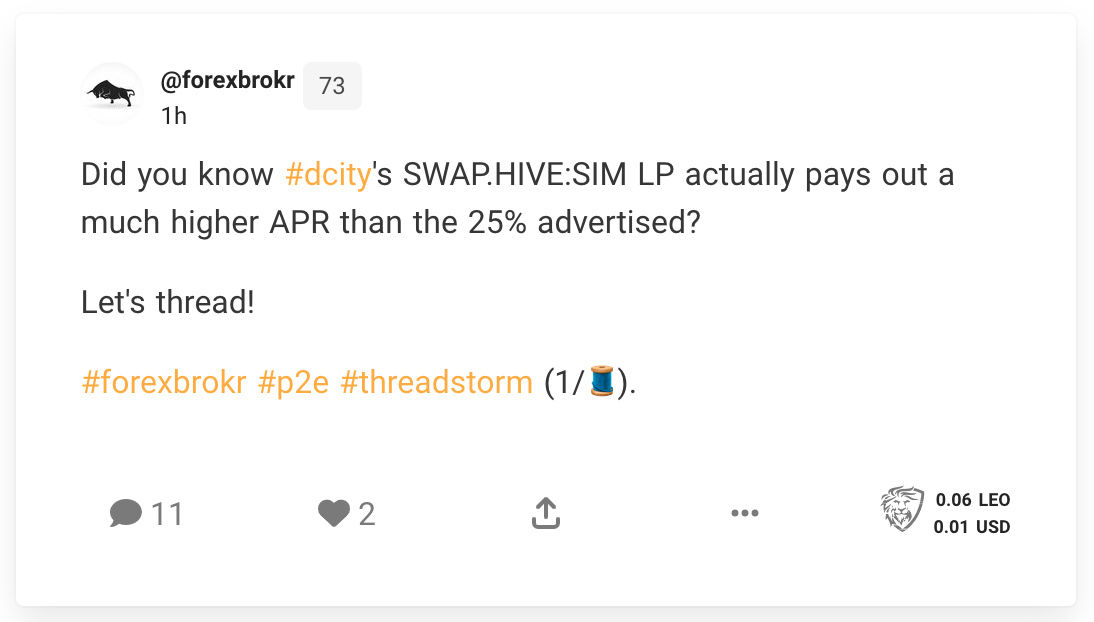 Let’s start with the extra APR you will earn paid in BXT.

Start by bringing up the BeeSwap interface and searching for the SWAP.HIVE:SIM LP.

Here you can see that not only does the LP pay an average APR of 25% in diesel pool rewards.

But that there's also an extra 8% paid out in BXT rewards.

You see the dCity game itself offers what it calls SIM holding rewards, of which depend on your account's SIM Power.

On the dcity.io game interface, that's this number here: 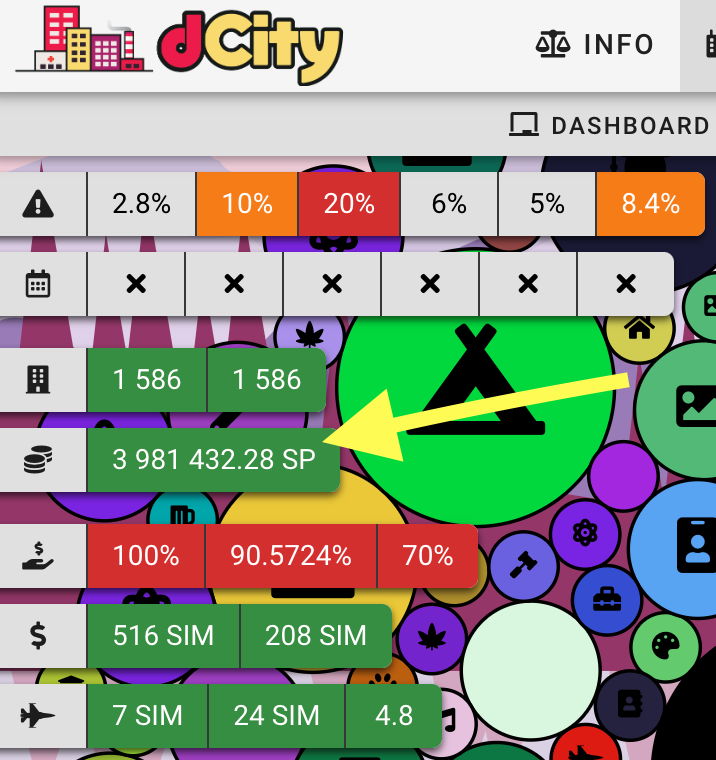 SIM Power is calculated from average 30 days SIM holdings and is used to vote on president, ranking rewards plus lobbying.

Additionally, with over 8000 SIM Power you will receive holding rewards (in HIVE) every day.

So assuming that your LP position is large enough, the current price of SIM is adding an extra 52% APR on your SIM! 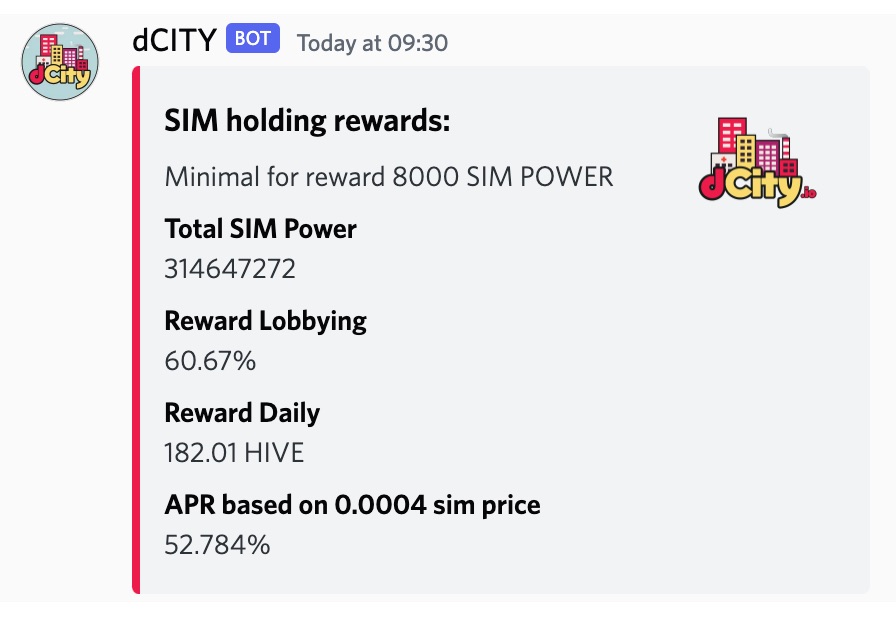 The kicker here is that the SIM side of your SWAP.HIVE:SIM LP position counts toward SIM power.

So once that 30 days goes by, you will also receive 52% on half your position (let's just say 26% for simplicity).

Not to mention that if the price of SIM goes down, impermanent loss means the SIM side of your position gets bigger.

As the SIM side of your LP position still counts, this actually increases your SIM Power and thus your SIM holding rewards increase too!

A really cool, additional quirk in the tokenomic design of SIM that is often overlooked.

So with that we’ve come time to add up all three of the rewards on offer in the SWAP.HIVE:SIM LP and determine the true APR on offer.

You actually earn a grand total total of 59% APR for being in the SWAP.HIVE:SIM LP!

With that, I stand by my previous statement that this LP is the best Diesel Pool available.

Leave a comment and let me know if you're in or now planning to get into the SWAP.HIVE:SIM LP.

PS. I also want to encourage you to go and check out gadrian's post talking about dCity that inspired me to come here and run the numbers.

Oh that's interesting. I had never thought about it in those terms.
However, I got out of dCity a while back. Maybe my mistake ... but I saw a better opportunity in BXT, which is not going that great right now.

I think BXT will pick itself up though.

I'm definitely a fan of BXT too.

With the BeeSwap bridge providing a clear source of revenue and daily payouts in HIVE for staked tokens, BXT will be fine.

Any plans to get back into dCity? ;)

Oh yes, BXT attracts me a lot. The daily payouts are good. Although decreased a lot now due to the Bear 🧸 I assume.

As for dCity, maybe yes I will get back into it. There's Rangarok and other games on the horizons that coule be more interesting. Don't know just yet...

I thought the BXT was already included into the diesel pool rewards so I wouldn't really add it and BXT doesn't give you hive daily unless you stake it.

That's niceeee. Thanks for the doing the math, I couldn't have done this myself.

Gives you an opportunity to compound and stack even faster :)

You're making me feel like I haven't focused enough on this pool, even though 98% of my SIM goes there. The other 2% I use to pay the debt for students. I just made up the percentages, not sure if they are accurate.

I have a few alt accounts with tiny cities focused on just getting new citizens and then instantly selling them.

I haven't done the math on updated APRs from instantly selling new citizens, it is definitely still worthwhile.

...If only I had 500 little alts following this strat!

Considering that BXT rewards are yield-bearing assets one could argue that this one is even above the 59% APR you calculated. If you keep staking it you get some Hive in return.

Take advantage while the yields and ability to compound like this, is on offer.

When Hive eventually breaks out into the mainstream, your future self will thank you :)

I am in this pool for more than 1 year and it is great to see that there are more rewards coming my way than assumed. The BXT is simply great as it gives liquid HIVE day after day.

Definitely one of the best pools to be in!